Mainly Afghan Tribesmen off the Workbench 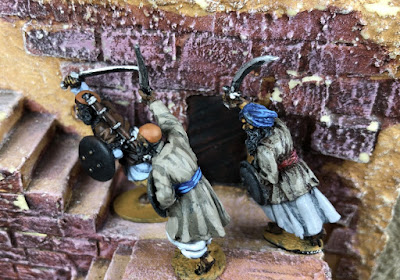 So I have given myself a break from Tartan (mostly) and got stuck into my Afghans, including some of the new Perry plastics and Empress figures.

I am enjoying the change but first I do have two highlanders to share I finished before moving on. These are Warlord and Front Rank which fit in reasonably well with the Flags of War and others. Whilst the Warlord figures are not everyones cup of tea I do like their highlanders and this figure with his axe in particular is a favourite.

Close ups can be cruel and these leave me thinking I should touch up the faces a bit, other than that happy to mix these in. 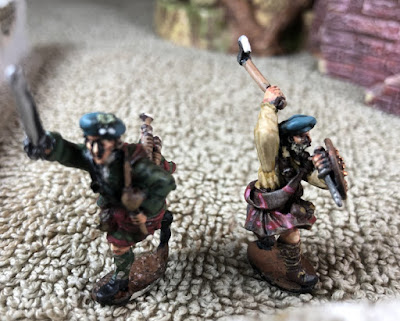 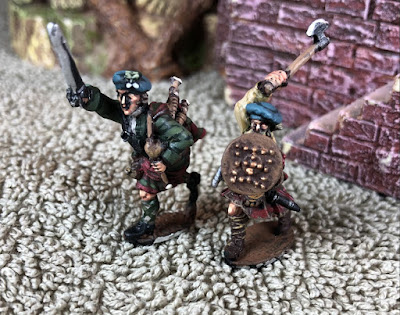 For the Sikh Wars project I have quite a few bits, this Officer for Skinners horse is an Empress Miniatures Indian Mutiny figure so truthfully the pistol is too late for Sikh Wars, I wont tell anyone if you dont though. 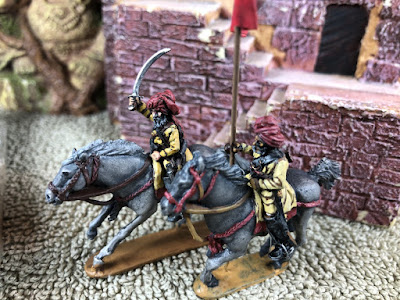 For comparison purposes I have put him next to the earlier Skinners Sowar test figure, I much prefer the officers deeper yellow. 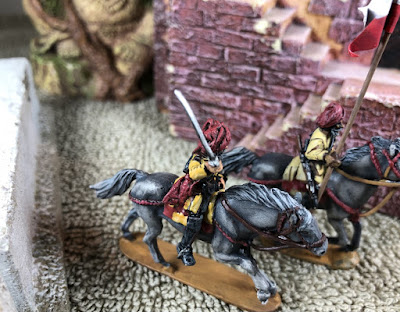 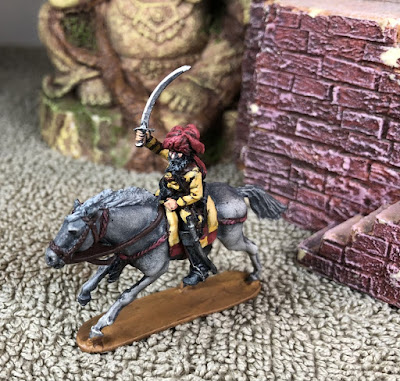 The Iron Duke horses have also come out really nice I think so I will press on with the other 8 of these at some point in the not too distant future. 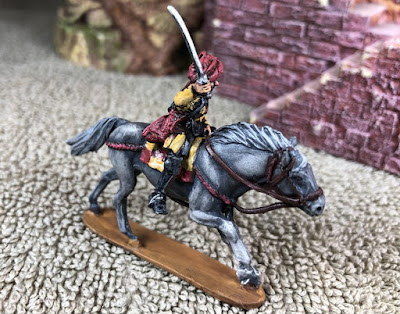 To some extent the irregulars I have tried to divide up by manufacturer or type for photography and posting purposes but they will be mixed up as randomly as possible for basing the units. Firstly the two Empress Afghans. 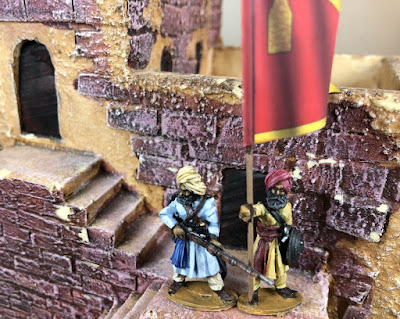 These are georgous figures, although I felt I didnt quite do the matchlock armed figure justice. Happy with the subdued colour schemes and splashes of colour. 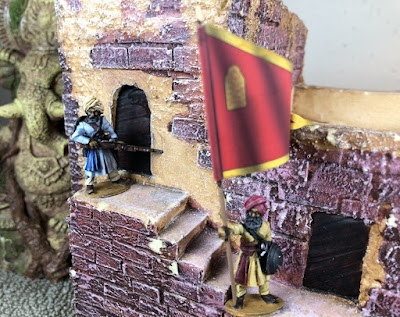 The flag is straight from the Perry plastics box sheet which should provide enough for the rest of my Afghans. I say Afghans but I very much think of these as Muslim Hill tribes, lots of these fought in the Sikh Wars and in the second Sikh War could be found fighting in large numbers for both sides especially at the siege of Multan. 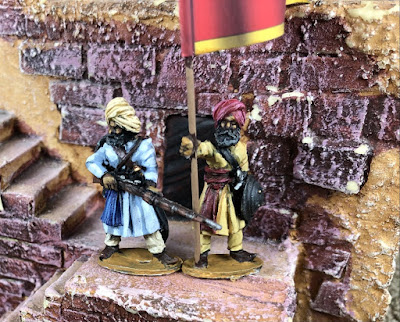 The next couple of lots are all Foundry from the original 25mm range, I have said it before but these are just as nice as any of the other ranges currently being released and nicer than some of them still. Really timeless castings. 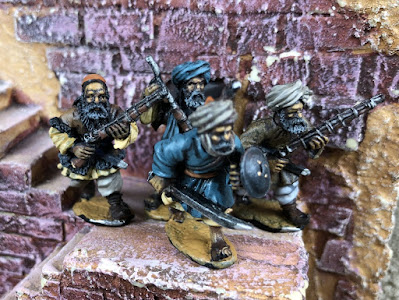 These jezailchis look suitably villainous, I have used a limited pallette of subdued colours for all of these with the odd splash of colour to lift them, again they all get mixed up once I base them so the various pallettes are mixed over the units too. 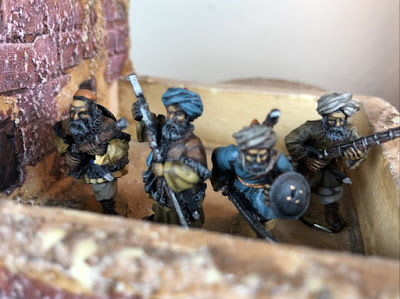 These two look perfect as skirmishers and I will be using some of these guys to create some 6 man skirmish screens. 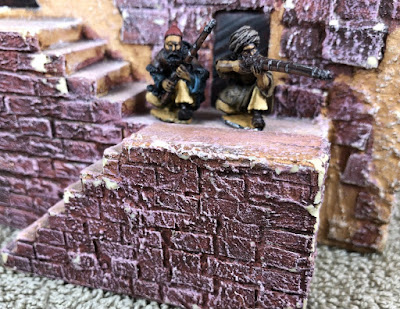 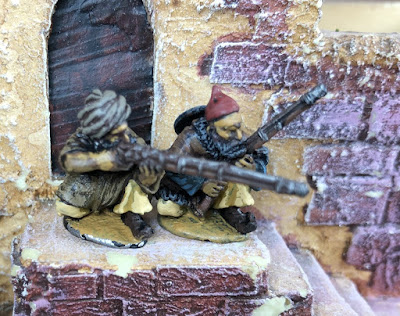 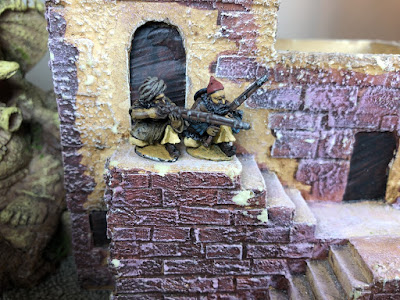 These next  swordsmen are two Perry's with one Studio Miniatures figure at the front. The Studio figure is nice enough and paints really easily as its very simple, but they are not my favourite, a different league to Perry, Foundry or Empress I think. Of course its all personal taste though.
Cracking figures, I will base blade armed troops seperately to firearms troops to allow seperate units with swords and spears. 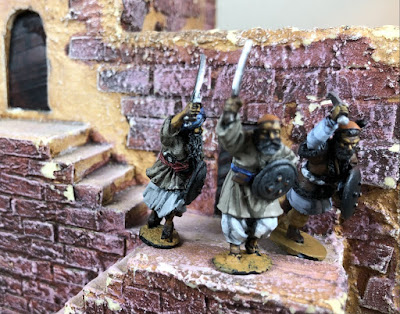 This figure is a plastic Wargames Atlantic, these figures are quite nice but again not quite in the same league as some of the others. Nice enough for me to mix them in though. 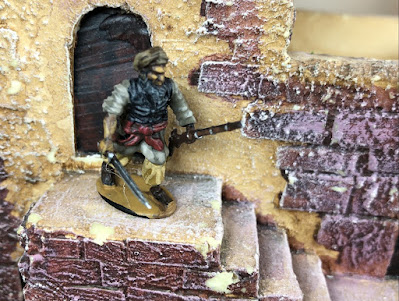 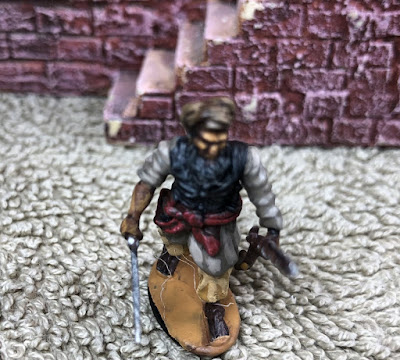 Lastly we have the Perry Plastics. I have built the first 22 and really pleased with the results. That said my modelling skills are not great and you will see the odd mistake here and there, hopefully these are not too visible on the gaming table and my skills may improve as I build more, or not...... 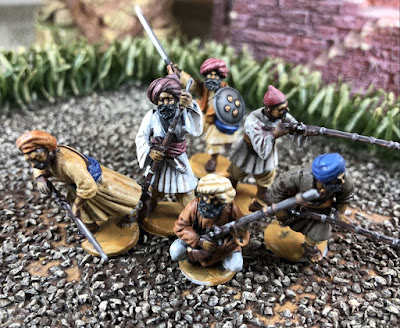 These are the first 6 painted and I have another 6 on the painting table waiting for base coats, I really like these figures they are just lovely, mildly frustrating that my modelling skills are not quite up to it, I can see exactly what I want to achieve and the end result here is not far off. I do struggle to get the arms entirely flush. 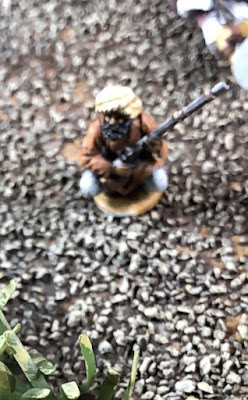 I have a close up for each figure to share what can be achieved even with fat fingers, again a limited pallete of subdued colours for these 6 wich I will change slightly for the next 6. The head for this one would be a good fit for a Mahratta which makes me consider the other uses for these chaps. 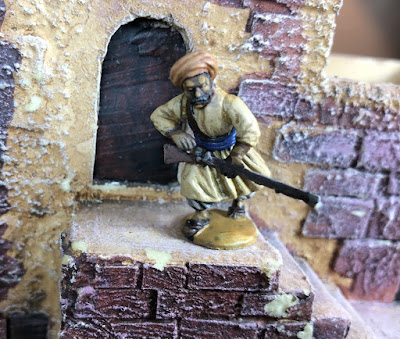 A classic Foundry Afghan pose, I wont do narrative for all the figures but pretty happy with most of them. 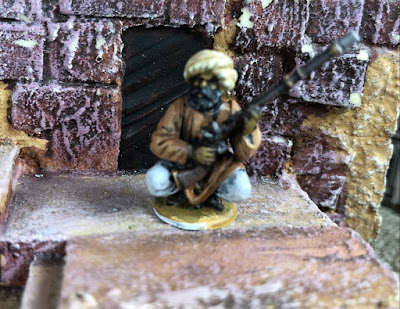 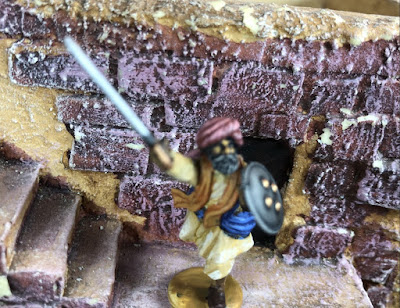 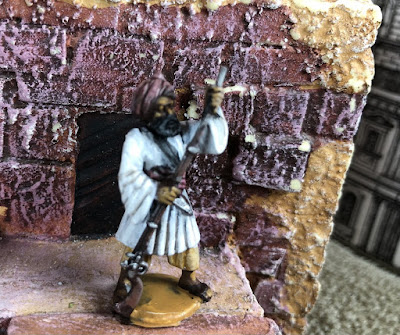 This one is my least favourite, I will try something different with this body next time, the head looks great on the sprue but for some reason I have just not been able to capture it. 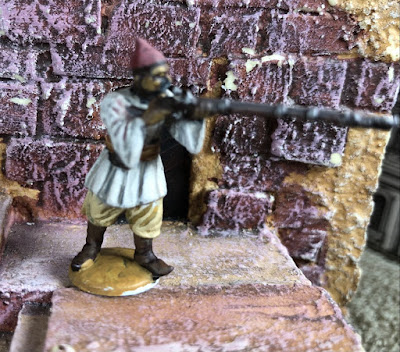 For this last one I have used a Bolt Action Sikh head, I hope to make up a full unit using these, it has worked really well. 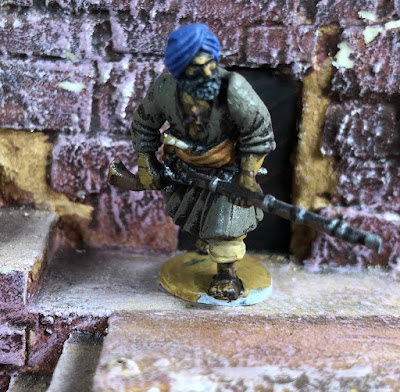 That puts me well on the way for my next two units of hill tribes with a real mix of manufacturers, A few more and I can start glueing them to bases and getting them over to the basing department.
Thanks for reading see you again soon. Stay safe.