My AWI collection is a real favourite that unfortunately has not been used for several years. Whilst we have done lots of gaming with Sharp Practice my 6 figures to a 50x50 basing means they are not very useful at all so only the skirmishers and commanders have been out of the box for ages.

Both Dave and Steve have switched to 4 figures to a base on 35mm frontage by 40mm deep bases, I have hated the idea of re-basing but as I wasn't able to paint for a week or two I decided to give re-basing a go.

I had two main worries, how hard it was going to be get 500 figures glued to thick wooden bases off and secondly how to do it without damaging them.

Steve re-assured me as he has done loads of rebasing, soak the unit bases in water for 24 hours so the filler or grout comes off easily and the glue is a little softer and they should come off, Chris C also mentioned a strong blunt bladed knife. Both were great tips and the figures started to come off. 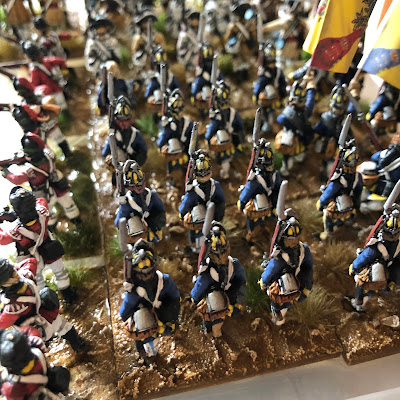 The finance department has been off work for some time and a little bored so I roped her into helping too, before I knew it the whole lot were off with virtually no damage at all. Awesome.

In these two pictures we see the bases soaking in the lids from some of the boxes. 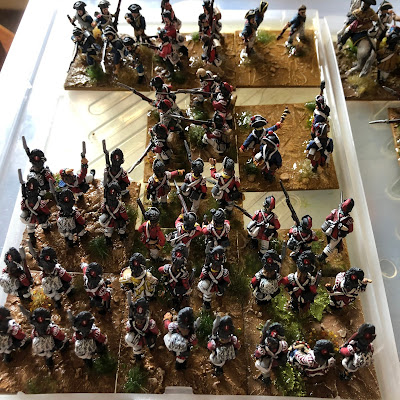 I was surprised to see how much my painting style has changed over the last few years as I checked out the individual figures as they were coming off. Still nice though.

I was even managing to salvage some tufts. 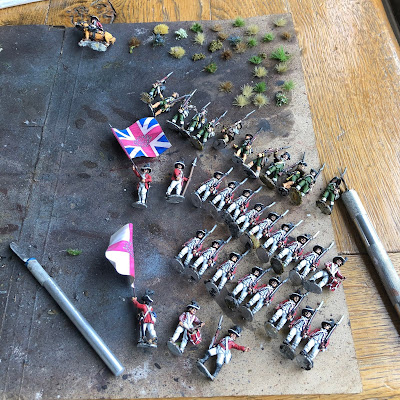 Being a tight Yorkshireman, I had initially also been trying to save the wooden bases, the finance department however ignored all that as she blasted through the rebasing and most of the old bases ended up in the bin. 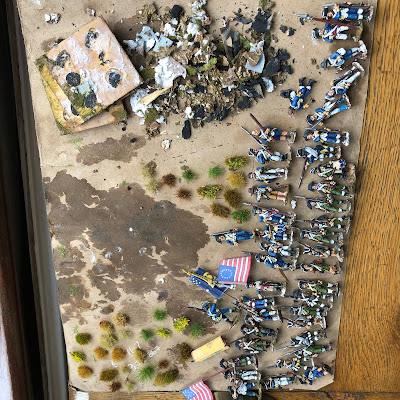 The figures were left to dry out for an hour or so, brushed off then carefully packed away as the new bases were still in the post. 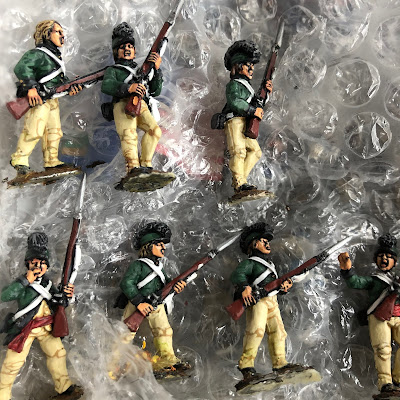 As I had been doing some of my own tufts I have a large bottle of nice glue that allowed me to glue the tufts back on to the special paper they come on, these will remain sticky for use with the re-based figures in due course. I manged to salvage the equivelant of about £40 worth of tufts so thats really helpful. 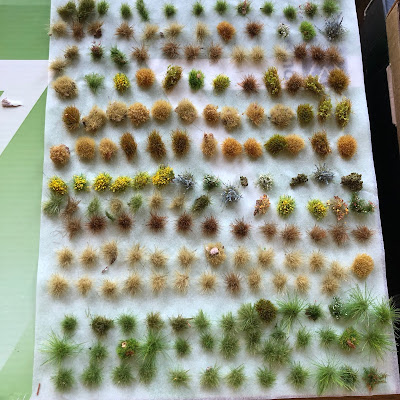 For the new basing the formed units would be 35mm x 40 mm as mentioned, this allows use for both Sharp Practice and the battalion level rules Steve is working on. Light infantry are in pairs on 35mm by 25mm deep bases to allow them to be formed or broken up in skirmish order. True skirmishers are in pairs on 40mm round bases, commanders on 60mm round (Although I have cheated and left mine on 50mm round) cavalry on 50 x 50 and artillery 60mm front by 80mm deep. 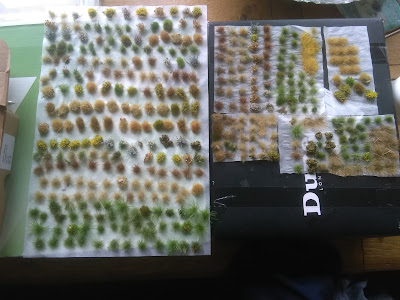 So with all the figures removed and the figures dried off I can start rebuilding the units and glueing the figures onto their new bases, I have to say I like how they look on the slimmer bases. 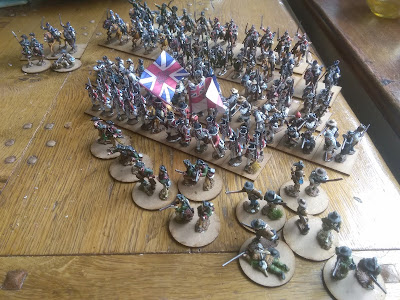 s
The 33rd (West Yorkshire) regiment is the first completed with the Jaegers in front on the 40mm round bases. 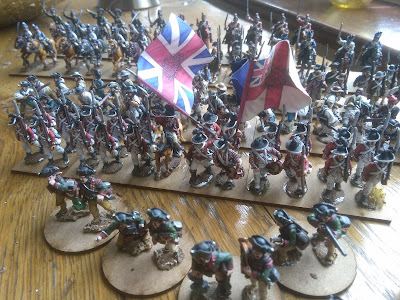 There are some obvious gaps as things get re-based, 3 of my guns have crews of 3 so picking up an extra pack I gave each gun an extra gunner. The photography is awful sorry. 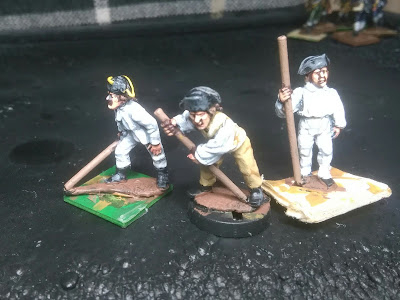 Two of the continental units had a couple of gaps also so I picked up a sprue of Perry plastics, frustratingly I got these the wrong way around I only needed two of the brown coated unit and 3 of the blue, the chap with the narrow brimmed hat has ben pressed into service with a Militia unit now and a chap in a hunting shirt moved into the blue coated unit. 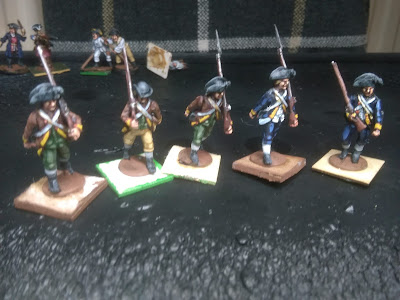 The two Yankee and one British guns look dandie now on their new bases with 4 crew each. Inital thoughts on 60mm by 80mm bases for artillery were that these were far too large but now I see them stuck on they actually look just right to me. Well done Steve. 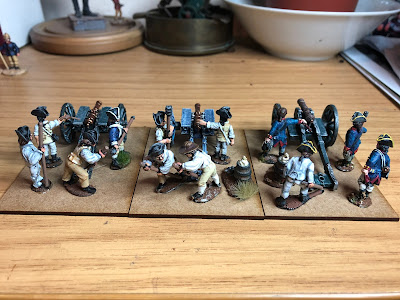 Here are just the Rebel guns. Mix of Perry, Foundry and Eureka figures, I think both guns are Foundry. 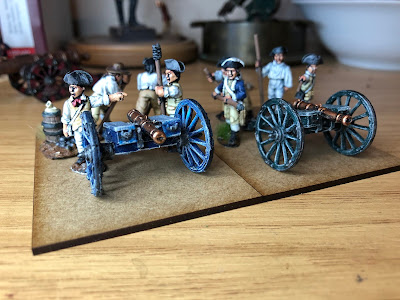 And here are two of the larger 32 man Continental units ready for the application of basing media. Both units are a mix of Perry, Foundry and Eureka's ragged continentals. 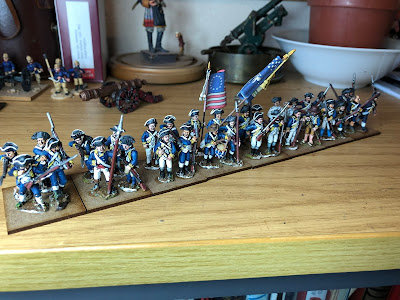 I have always liked this additional regiment with the brown faced yellow coats and green breaches and waistcoats. Very nifty even if some of them are in Valley Forge rags. 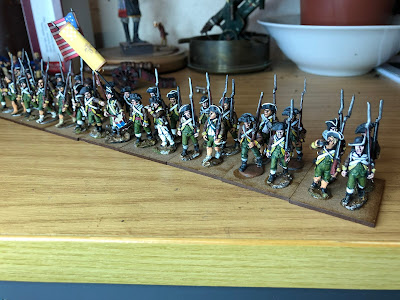 I will do a little photo shoot when they are all back fully based up, but excited that these may be back on table some time soon.
Posted by RogerC at 07:27