I have been working towards units of 18 or so foot and 9 horse on 50mm frontage with 80mm depth for the Swedes. The idea being that all of the models are inside the base and get better protection. 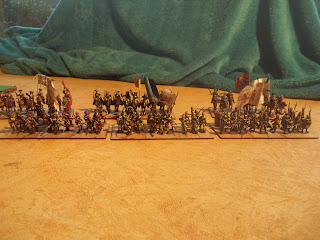 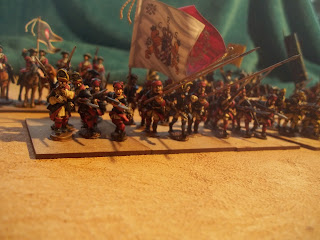 We then have two battalions of foot so you can see how this actual looks closer up. For the foot I have used "virtual third rank" idea pinched from other blogs doing GNW including Black Powder games and Der Alt Fritz both at the bottom of my page.  drummer or file closer at the bank giving the impression of a third rank. I like this approach. 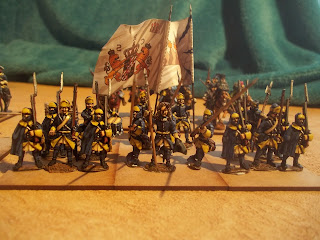 I had some concerns about the standing unit looking lost on the big bases but I think it works really well. 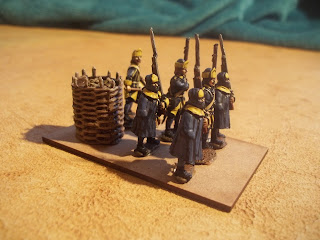 In the command and pike base here the virtual rank is in the middle. 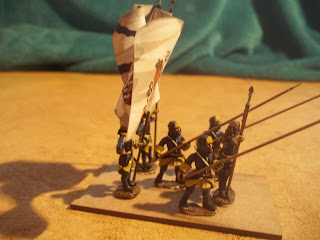 And again with the charging command and Pike. 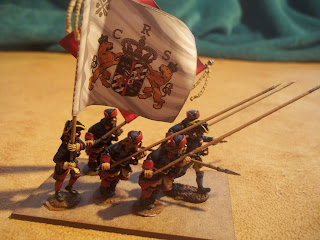 The Cossacks work well on these bases as a mob. helps with the irregular feel. 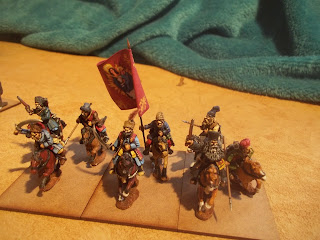 And again with the Swedish horse allows the wedge formation to form properly, but keeps them nice and tight. 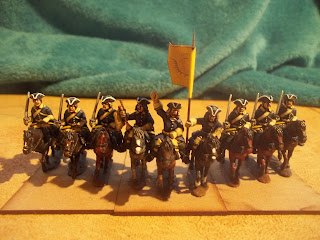 Initially I was going to base the Saxons on 60mm depth, the foot in particular marching should look better, but as below I am not sure if its a little shallow for the horses, they will touch the fingers either end when being moved. On a deeper base this isn't a problem. 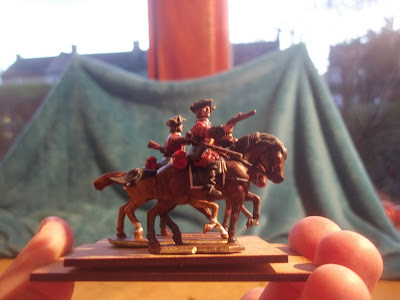 So I am almost there, I think this is probably the way forward but would welcome comments and opinions. What does everyone think? 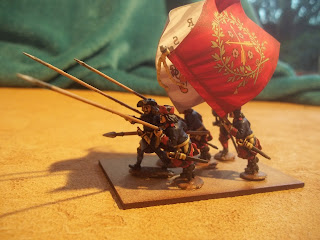 Email ThisBlogThis!Share to TwitterShare to FacebookShare to Pinterest
Labels: BASING


Paul Hicks is one of my favourite sculptors so I was looking forward to seeing these. I was not disappointed. I received four figures, an officer, a Grenadier, a pikeman and a musketeer marching. The last three come with separate heads to add variety which I really like.


So far I have painted the grenadier and the officer 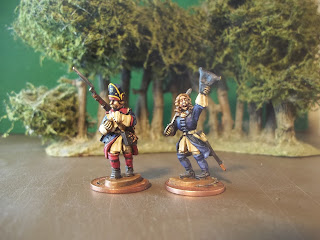 These a fantastic figures which paint really well. These first two in particular are very characterful, the enthusiastic young officer waving his men on and a grizzled grenadier lighting his grenade. 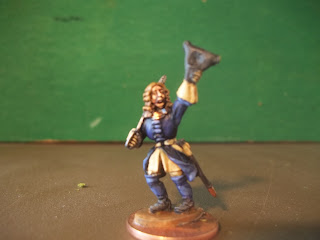 The officer I have painted in all blue facings which many officers and some NCO's from all regiments wore, this makes him useful for whatever unit I decide to use him in. These figures have slightly more waistcoat exposed than most others, no idea if this is more or less accurate than other ranges bt it does give extra contrast which I like. Apologies for the teeth I may have made him a bit too toothy! 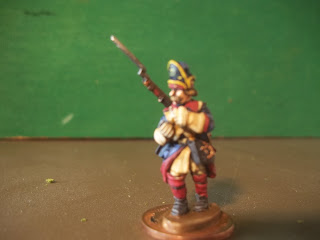 The grenadier is again very characterful, with the fusewire rolled around his fist to light the grenade, the musket is a separate piece and equally well sculpted. Overall really pleased with these figures and looking forward to getting a lot more.
Apologies the last two pictures are not great, Ebor website is http://www.eborminiatures.com

Next time I hope to have painted another unit of Swedes and will be posting the options for basing before basing department is home for Christams from Uni.

For my Saxon forces I wanted to keep cost to a minimum. My initial thoughts were to use the Ebor WSS range, these do come in at great value for money when you buy the battalion or brigade packs. However I noticed a good deal on the Wargames Factory WSS figures, both horse and foot, via eBay. I was initially quite sceptical about the plastic figures, but having seen some in the flesh and some great painted examples I decided these would in fact be very nice.

So two boxes of foot and 2 boxes of horse later, I was building up some very nice and very easy figures. The figures are quite slim and each sprue gives you three figures, the first two just need a head and hanger added to be finished which is nice and simple, exchanging tricorne heads with the cavalry pack also gives you some more variety. The third figure on the sprue has a huge variety of options and I have made Grenadiers, officers, sergeants etc. from this figures, there are also drummer options and standard pole and officers partisan on each sprue so lots of useful spares. However building command figures was slightly more complex and didn’t give me as great a final result so I decided to add Ebor command to the plastics, roughly 6 metal figures to each battalion of 18, this seems to be working very well indeed and I hope to have pictures of the progress soon for you.
The Wargames Factory Cavalry are very multi-purpose with 5 different torso’s to choose from, however this does also mean there is a bit more to the building of these. The horses are also very nice and like other plastics take oils very well. 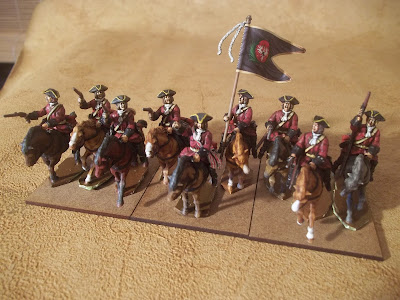 The first unit of Saxon Cavalry painted are the Goltz Dragoons. Black facings and saddle cloth with the usual red coat for Saxon troops. The Goltz dragoons fought at both Kliszow and Fraustadt so saw plenty of action. A unit of 9 figures as with most other cavalry I am doing, we still have the basing to resolve but 50mm by 60mm deep is looking pretty good as above. 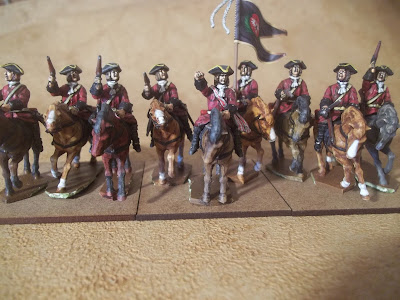 I will also be painting a unit of Cuirassier at some point, same figures different torso, tempted to do the Leibregiment just to have a unit that is anything but red as below. That will leave me with enough Cavalry for a further unit, I am tempted to add a second Dragoon regiment but have plenty of time to decide as painting these will be a few months away.

With all of this talk of Saxons, Poles and Cossacks you could be forgiven for assuming I have forgotten about the Swedes, not so!

I have been beavering away in the background and now have the first two battalions painted to go with the first regiment of horse. I will pull a post together soon to update the Swedes, I expect to have some Ebor Swedes by then too so I can share my thoughts and perhaps a picture or two of the figures.