A Swedish review so far


As I cant paint at the moment I am trying to prepare the ground for when I can, in the mean time I thought it might be nice to review how far I have come over the last 16 months since thinking about the project.


I reviewed the Cossack Cavalry Brigade last week so here are the Swedes. Please note Saxons and Poles to follow and I have used two different Cameras, I appreciate thoughts on which one gives the best results. 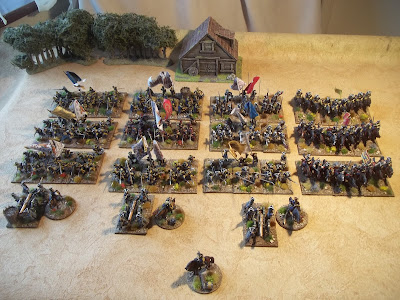 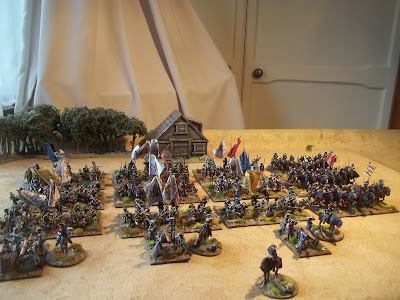 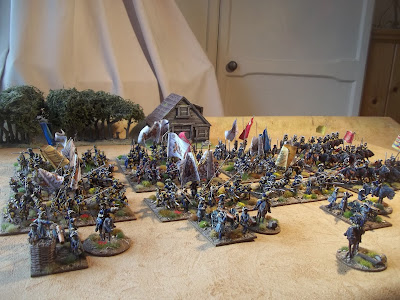 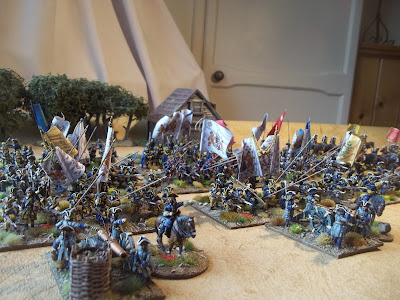 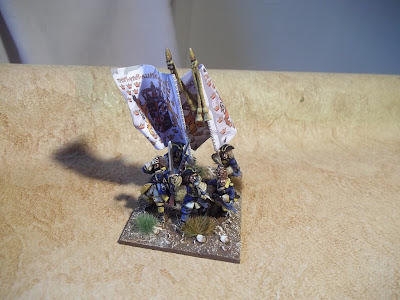 So completed so far we have 9 battalions of foot, 3 double squadrons of horse, 3 guns and 3 generals. Plus the first base for the Guard Grenadiers.


As a comparison then below are the pictures from my new Mobile. Thoughts? 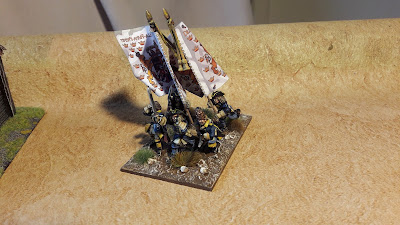 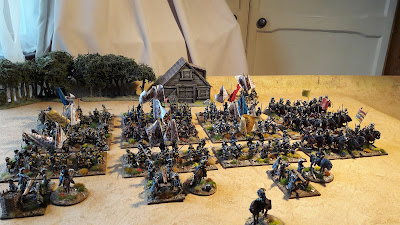 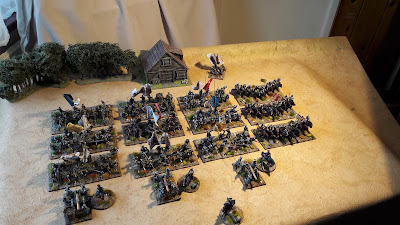 I have also taken the opportunity to photograph the Poles and Saxons so far and will add a post with those on over the next few days. In the mean time I hope you liked these.
Posted by RogerC at 08:38 10 comments:

OK so as I cant paint very much I decided I would share my plans for the next few units I will be working on. It may also shed some light on the method behind by madness (Or the madness behind my method).


One of the key things for me is the motivation to paint. I think I have said before that this blog has been great for keeping me focused, If I look at a pile of lead I get easily distracted, doing a figure here and there for various projects. With this in mind I tend to have 2 or 3 different types of figures on the table at once. This keeps me interested and I can trick myself into not being over faced by 40 or so red coats for the next two battalions of Saxons for instance.


This also means that every so often I open the box where I stick the painted figures and find I have the majority of a unit complete and become very motivated to do the last few and get them on here.


So I thought this might be a good time to share what's in the painted box and how that fits my plans for the next couple of months. Most of which is aimed towards getting the figures on table for another small battle. With Dave now working his way through the second batch of 4 battalions of Russians along with some horse and Mark well into his 10th and 11th units of Danes, I really need to get some more Swedes complete in order to avoid being swamped. I also wanted to focus on Poles and Cossacks to bolster the Swedes.


Our next game is more of an alternative history, The Saxons, Russians nd Danes all fought together against the Swedes in Northern Germany as part of an allied army later joined by Hanover and Prussia, but after Poltava the Polish and Cossack allies of the Swedes were defeated in Poland before they could join up with the Swedish Garrisons. To allow us to get more troops on table for now we will allow the Cavalry forces of the Poles and Cossacks to break through and join the Swedes, giving them a fighting chance.


The images are from the excellent web site http://www.tacitus.nu/ which I find really useful, I hope they wont mind me sharing them here.


So the first figure for my next Tremanning battalion, very plain but the yellow offsets the grey really well, along with the Upplands unit this will add a slightly different dimension to the blue and yellow of the Swedes. Only one done but they are quite simple so I hope to get these done reasonably quickly when back painting the rest currently languish on the table primed up and waiting for their undercoats of grey and orange. 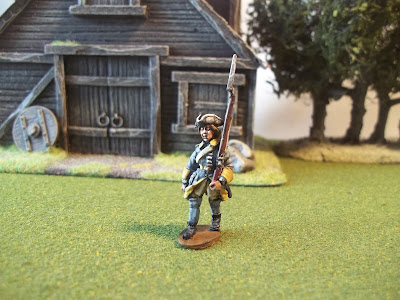 I then will be working on a further battalion of Livgardet til fot, the foot guards. The first 4 figures are complete as below. 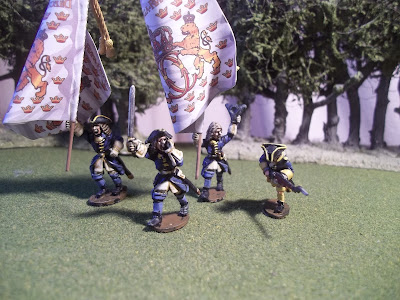 The first two pike for the Jonkopings battalion are also done, I will be using mainly Foundry figures in cold weather gear for this unit with some standing Warfare minatures mixed in. 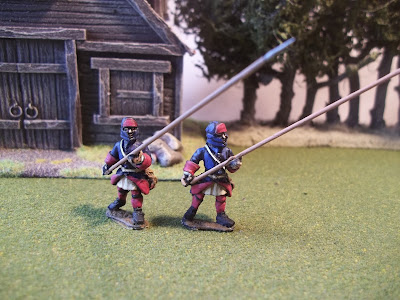 The most advanced of the units is the Liv Gardet Grenadiers. I have 13 of these guys finished so only 5 more and these are done, really excited about how dynamic these will look when done, mixing charging figures with the Ebor storming party will hopefully look great and complete the 4 battalion guards brigade 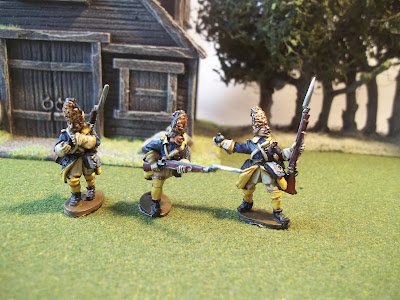 The cavalry is the biggest gap, I have 3 units of Swedish horse currently, 2 using Ebor figures and one using footsore. Both look great but I am keen to see the Warfare cavalry before finalizing the figures I will use for the rest. Warfare do have one Swedish trooper and I have painted 6 of these as the basis of my Liv Gardet til hast, or horse guards, these guys are in a paler blue uniform so do stand out. I have also ordered some of the Warfare troopers bareheaded and the "enthusiastic command" whilst these don't have turnbacks so are not really Swedish the odd one mixed into the Swedes will add a slightly different dimension. I hope to have 15 or so painted by the time of the release of the cavalry, possibly 9 of the Livgardet and a couple each for the other units I will be doing. One of the bareheaded troopers is below with one of the Swedish troopers, not sure the picture captures the pale blue they are painted in.


I currently plan to add 5 units in the immediate future 2 Liv Gardet til hast, 2 Liv Gardet Dragoons and one Livonian Adelsfana (grey faced yellow). I am doing each unit of 9 figures, effectively as a double squadron which seems to be how they were brigaded and is similar in compostion to how foot regiments had 2 battalions. Larger regiments of horse seem to have had their double squadrons split on different wings of the army quite often. The Adeslfana regiments tended to be a bit smaller so will only get one 9 man unit. This will take me to 8 cavalry, I plan at least 10 so yet to decide the composition of the rest, possibly adding schlippenbachs dragoons in. 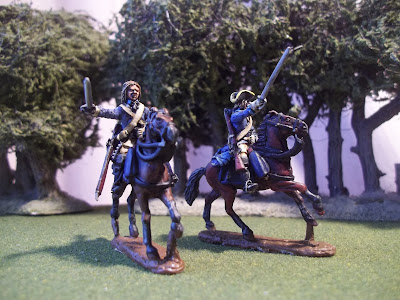 Lastly I intend to have a second unit of foot Cossacks, the Russians used these to bolster the Saxons in the early Polish campaigns and the Swedes used them around the siege of Poltava. They add a degree of colour and character to the armies and this second (and probably last) unit will mainly be in Brown uniform coats. 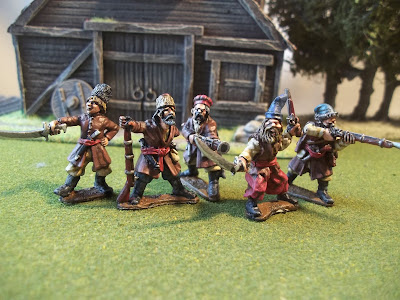 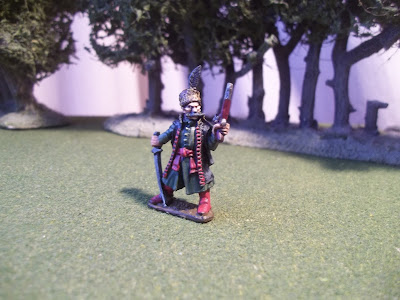 So that's the plan, probably the Cossacks will be complete first as they are the nearest to finished, followed by the guard grenadiers. The cavalry to some extent is dependant on Warfare's release schedule, these have been dropped down the que a little to accommodate more Russian foot. Once released they will probably move straight to the front of my painting line and I intend to have some of the horses already prepped by the time they come so I am a little in front.

So there you go, the insight into my planning process for the project. I hope to have an update soon on some of these units.