A small game tonight with just Steve and I. We are still missing a few bits I am sure like points for the armies and entry points etc but getting there with the basics. I do have to admit I forgot my lists for the retreat from Moscow so we used the basic lists from the rule book for French and used Portuguese for the Russians. I dont think they were too far out, its all about learnign the rules anyway. 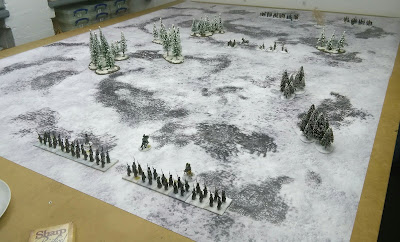 The basic premise for the game was that Ney commanding the rearguard had found himself left behind with a gun that had no limber and horses and a small group of skirmishers. The French have sent back 5 groups of foot to rescue the Marshall.

Meanwhile the Russians close in with 6 groups of foot and a group of Cossacks. 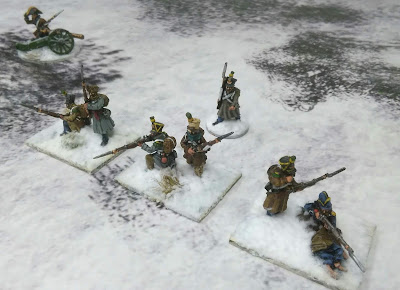 The figures are a bit of a mix. The Russian foot are all from Wargames Foundry, the French Gun is Black Hussar, the Polish foot are from Murowski, the Russian cossacks are Perry and the French are a mix of Warlord and Victrix plastics with Perry and Foundry metals all mixed together, probably about half Perry's and half the rest mixed together. 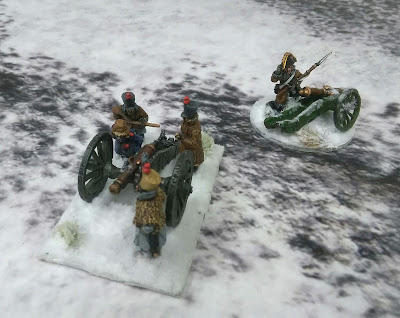 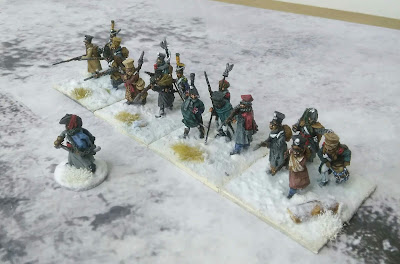 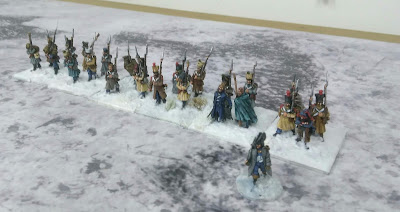 Initially the game starts with each side trying to out march the other and close in on Ney and his little command, the only firing is from the artillery as the Russians come into range but initially this is a complete flop for me. 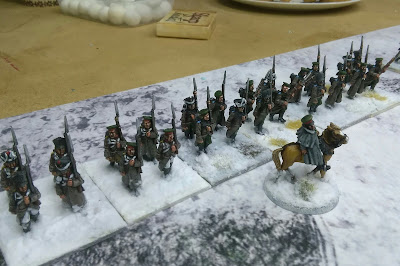 The Cossacks do not have a commander so for them its either activate by the extra cards of by the Commander of the force if he can get close enough to them. As the first two cards come out before the commanders the Cossacks belt off around the French flank and further away form the Russian Commander. 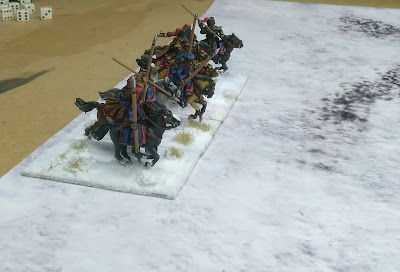 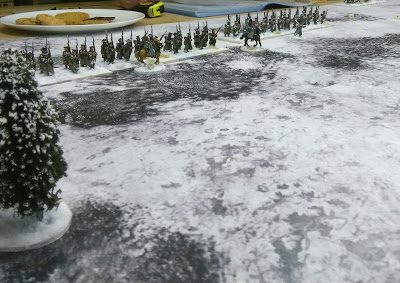 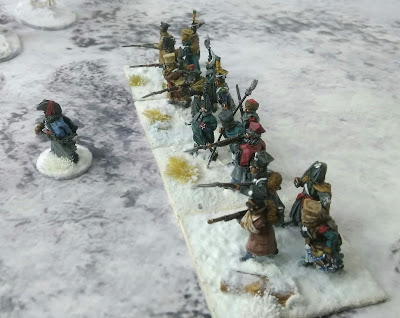 The Skirmish screen also advance a little, this will be a bit of a sacrificial lamb, hoping to make some of the Russians expend their actions on firing and loading rather than advancing. 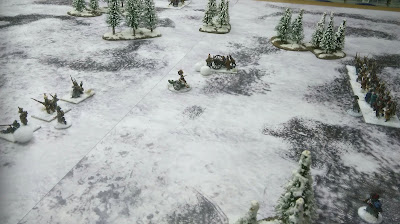 Which you would have to say works as the first Russian volley inflicts a casualty and a shock marker, the return fire is useless and leave my skirmishers unloaded. 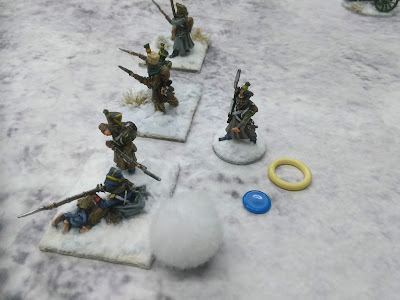 Another move and the two sides close but the Skirmishers now have 4 casualties and 3 shock markers forcing them to break and retreat, so much for my plan. 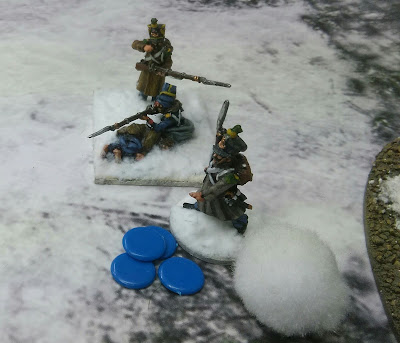 It was just enough however to get my infantry to Ney and meanwhile my gun has managed to inflict a couple of casualties on the Russians who are able to spread it across their 3 group formation of grenadiers. 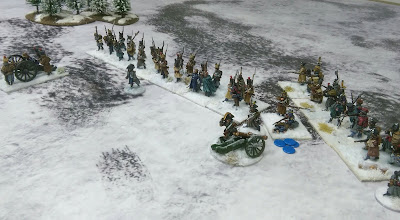 The Jaegers press forward as the Grenadiers trade volleys with the French gun, casualties begin to mount but they are also hitting the gun crew. 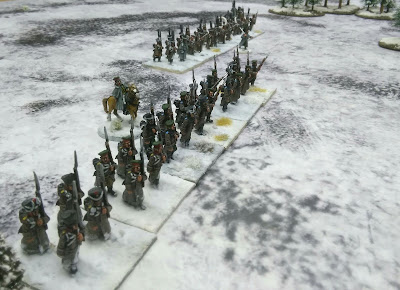 In the distance you can see the Cossacks are now level with the French flank and ready to cut in behind them and block their retreat. 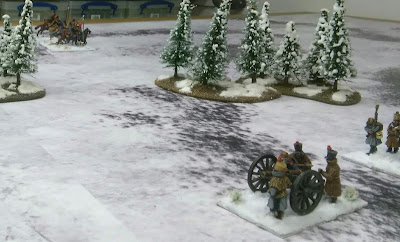 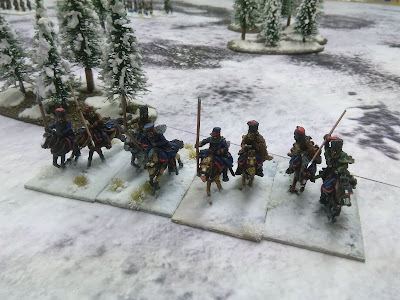 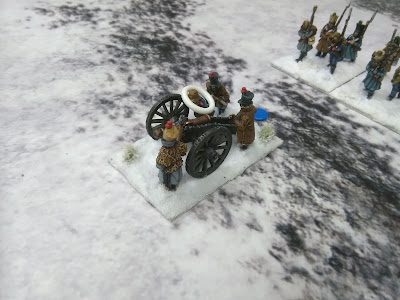 Three casualties and 2 shock markers on the Grenadiers but that's only one of each on each unit showing why they are better off in larger formations that can spread the effect of fire. 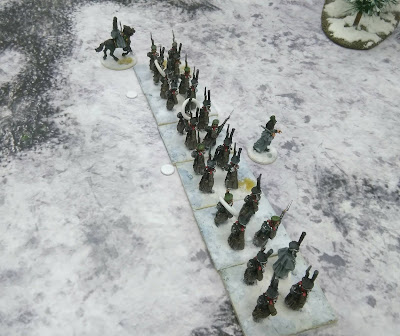 The gun crew however now have 2 shock and 2 casualties and we are discussing how many crew it takes to load and fire a gun. 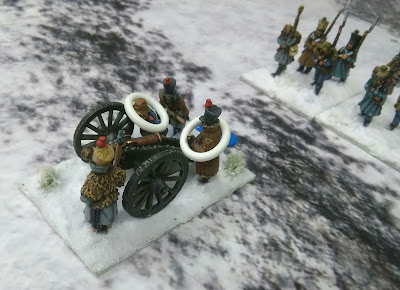 The French and Poles are now trading volleys and Ney is safely behind the lines of is own troops. 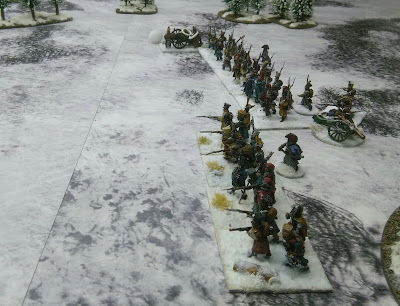 The volleys are at reasonably long range as closing means missing an action to re-load at this stage which neither side fancies. 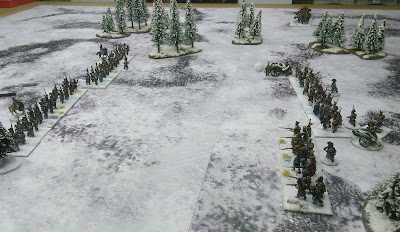 Before we can figure out how many men you need to fire and load the gun another volley take a further casualty and a further shock meaning their are more than double the shock to remaining crew and the last crewman break and legs it leaving the gun. Oddly enough this now also frees me up to begin to pull back and get Ney to safety. 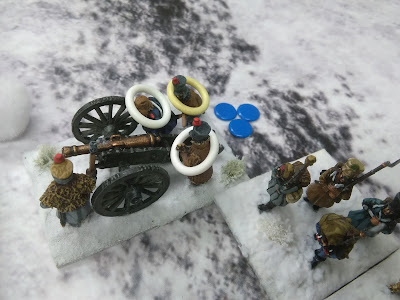 Each formation fires a last volley and steps back, the Poles have taken a small amount of damage, the French masked by the gun have taken non at all. 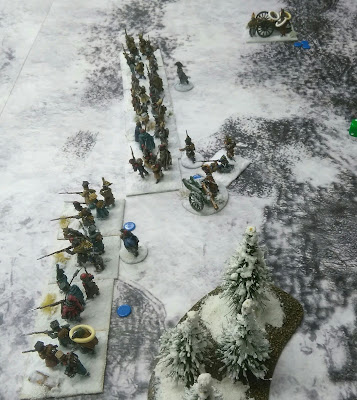 My skirmishers have pulled back and had a shock removed by Ney meaning they are kind of under control but with the cossacks now around my flank they are looking rather doomed. 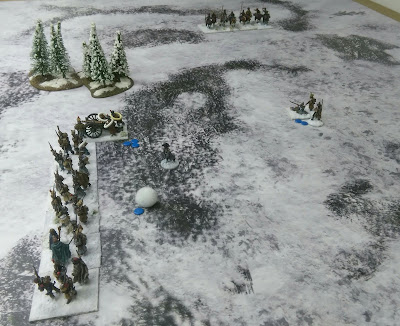 Steve's last volley drops some more shock onto the Poles and the first casualties on the French but his infantry is unlikely to stop me pulling off table pretty much intact. The Russians whilst damaged are also in pretty good shape.  The only question is whether the cossacks could do enough in my rear to stop me escaping. 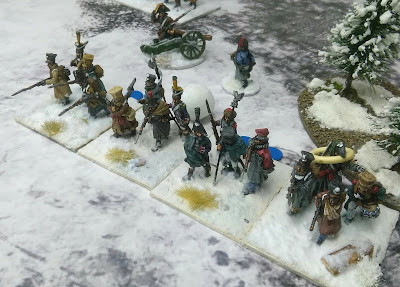 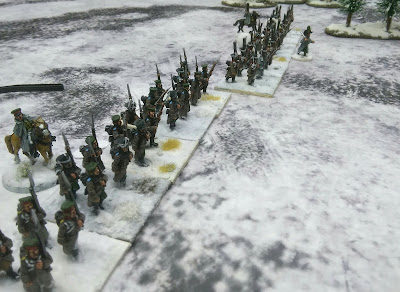 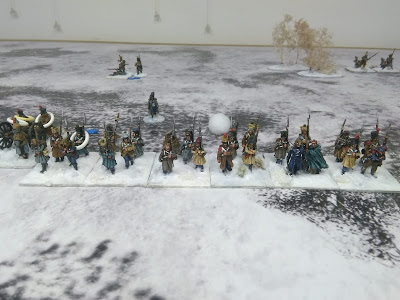 We have however run out of time and call it a day at this point, another good outing for Sharp Practice, still some rules to try out and very little fisticuffs for us to get our heads around the mechanisms but we continue to enjoy the games and the way they play so these are looking a firm favourite at the moment.

Next time Russian Civil War for a change.
Posted by RogerC at 03:25