With another retreat from Moscow game coming up I wanted to get some more figures finished and I thought it might be an opportunity to share my experience so far of snow basing.

The basing department has not been let loose on the finished article for snow bases as I am still learning myself, so for now she is painting the edges white and giving them a layer of pollyfilla so I can play around with them, If I don't do them straight away they do start to go a little bit yellow.

So here's everything I have to base so far, a number of trees that came loose which I have add to multi-bases, 2 and half units of French, a unit of Russians and few commanders.

First job to add a bit of depth I am using a watered down fog grey to splash onto any rough or stony areas. I then add the odd frozen or dried up bush or tuft of grass. 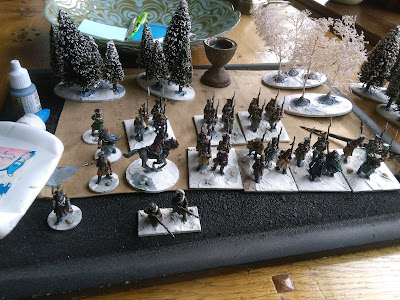 Then I slap on liberal amounts of PVA Glue and chuck a pile of 4 Ground snow basing material, I then press it down a bit to make sure it beds into the PVA. 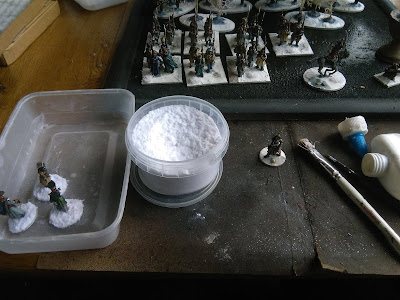 These birch type trees are lovely but really delicate.One of these three snapped so I glued the broken bit to the base so it looks like a bush or a fallen tree. 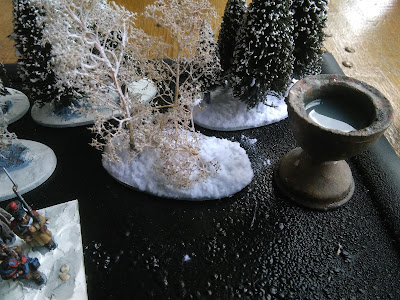 You can see on these two bases how the 4 ground snow flock balls up and really does look like snow at this stage. 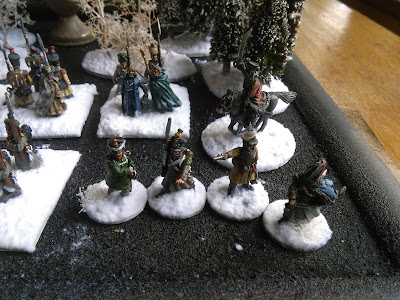 Next after leaving for a couple of hours to set properly I tap all the excess off and dust off the figures, inevitably there are some gaps now which you might be able to see on the below figures. This is the messy bit as I re-apply PVA but get it all mixed up with the flock already on, then slap more flock on and press it in. This second coat pretty much serves to fill the gaps. 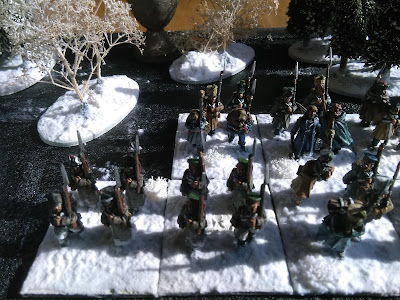 Hey presto the bases are done. I don't mind them looking a bit rough, after all this is ground that has been marched over, I do need to add a lot more ramage and abandoned equipment though I think. 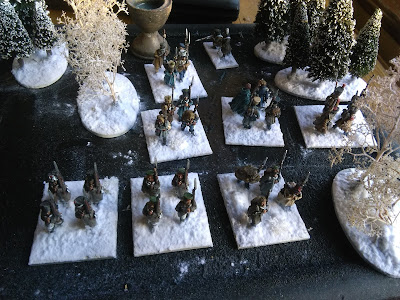 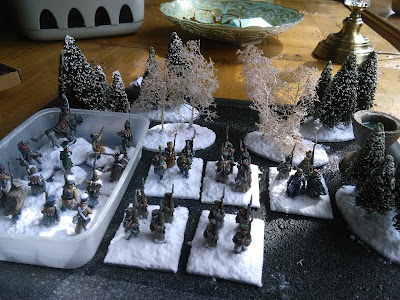 So here are the fur trees, nice models and very cheap plastic affairs though I don't think you can tell. 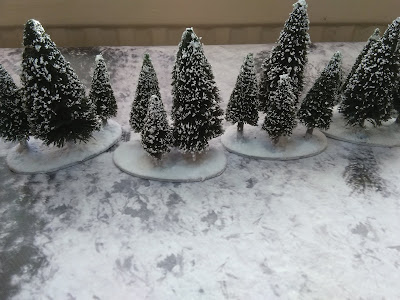 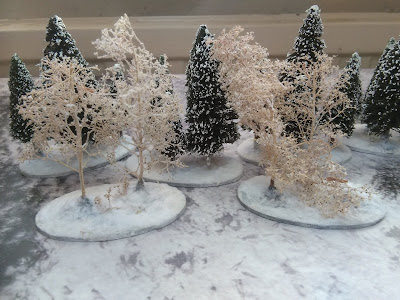 A pair of Peasant skirmishers, I will have a unit of 6 skirmishers and a further group of 12 pitchfork armed peasants to harass the French. 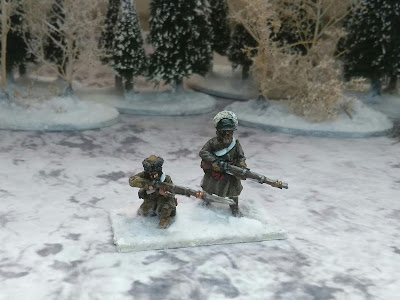 The first group of Russian Line infantry, I hope to have at least 6 of these allowing me 3 battalions for Black Powder. 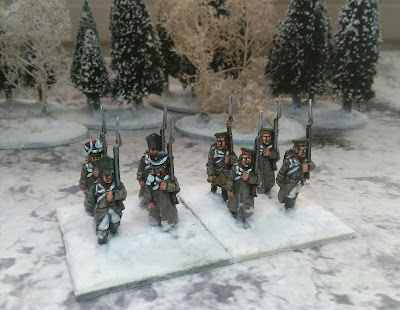 The first of the French includes a command base and a grenadier base and will be half of a Blackpowder battalion. I have 3 manufacturers mixed on each base. Warlord plastics, Foundry and Perry metals. I like the mix. The Officer may in fact be Victrix and again is a really good fit. 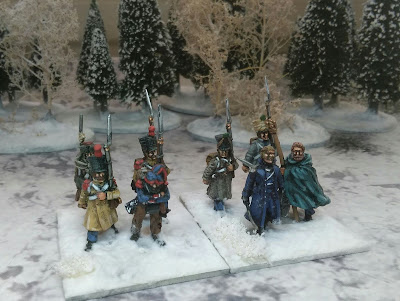 A second group with half of a third group, the washing out of the light makes this look misty and even more cold I think in this picture. 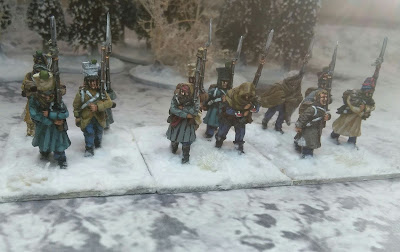 A bunch of commanders for the various units, again with the freezing fog creeping into the background. 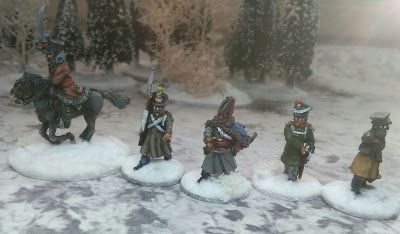 A peasant commander, I really like this particular figure and he has painted up very well. 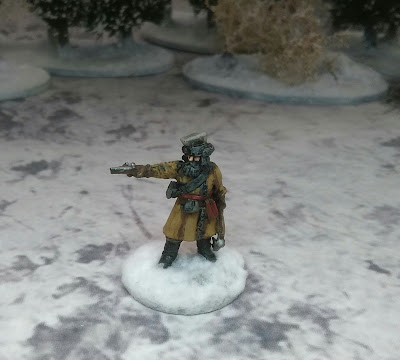 A foundry Russian Officer, not really one of my favourites but he has come out OK. 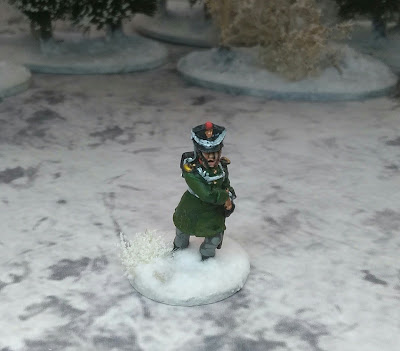 This French officer looks OK but again hasn't quite come out as nice as I thought he might. Ah well I have another to paint so perhaps the second one will be better. 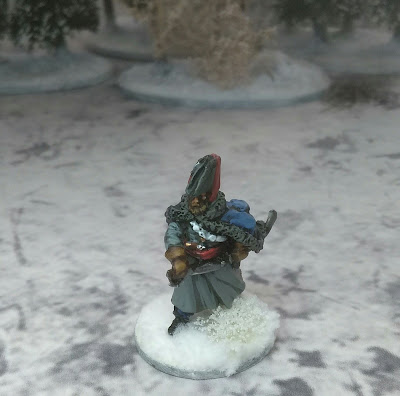 A Volitgeur Seargant to lead a unit of skirmishers which I am currently working on. An old Foundry figure this is still very nice. 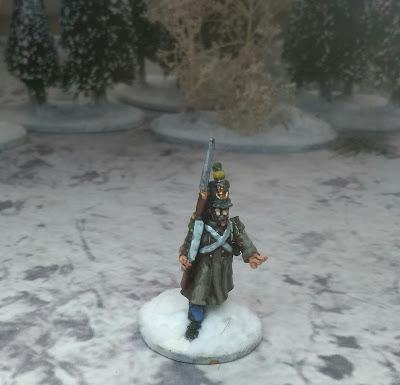 The first of the French cavalry a leader for the Chaseurs a cheval. A Perry figure which I am quite happy with. 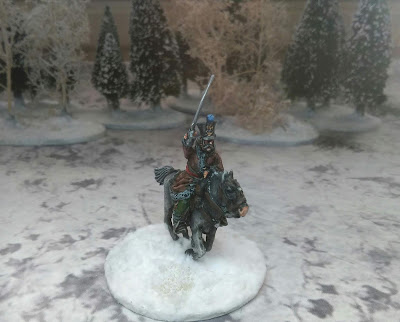 And lastly a group shot to make me feel a bit better about my progress. 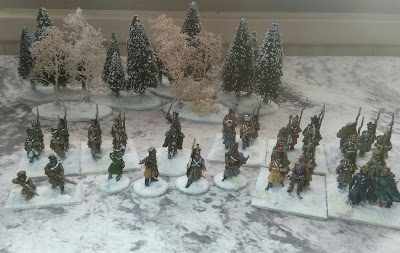 I hope to finish off the peasant skirmishers and a skirmish unit of French before a game at Steve's on Thursday, I also want to get some baggage wagons done to use as vistory points to fight over, these last are unlikely before the game. However I don't want rush so no promises.

Going forward I also think I need to start adding some abandoned equipment to the bases, I have added odd logs and bushes, packs, broken wheels and other gear I think would look good too.

So more snow to come (winter is coming afterall!) and a game report to follow too.
Posted by RogerC at 03:29