A few of the Irish back from the basing department and I have finished units hurrah!

These first four are left to right Perrys, a Westwind Dark Age scot , Essex ECW range and another Perry. This latest set mainly have slightly darker coloured tinics as I want a range of shades. 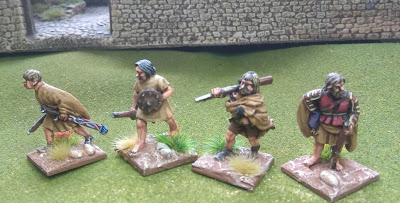 This now gives me 13 Shotte. Both Pikemans Lament and Sharp Practice use 6 figure units of skirmishers so two units completed. These are my two prefered sets of rules for Elizabethan Ireland, for Sharp Practice I have the Sharply Buffed variant, we will see which works best once they are ready. The irish shotte were very adept at skirmishing so along with the two 6 man units of bows these will be knawing away at the edges of the English force prior to a charge of armoured axe weilding Gallowglass.

The figures are half Perrys Irish from the Wars of the Roses range bolstered by conversions of other figures. Crusader, Westwind and Essex. 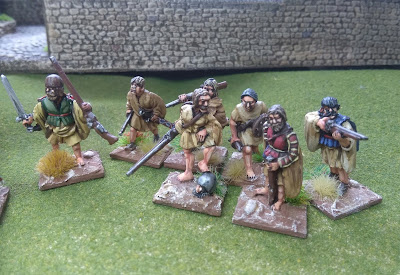 The leader figure in the centre will probably be the start of a third unit at some point. Really happy with how these units have turned out. 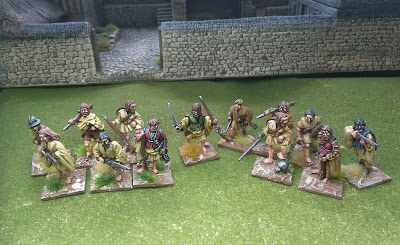 The second unit in isolation, again mainly Perrys, the helmeted figure to the left is a Perry figure with a head swap. I am really pleased with how the Elizabethans are looking, pretty much exactly as originally imagined. 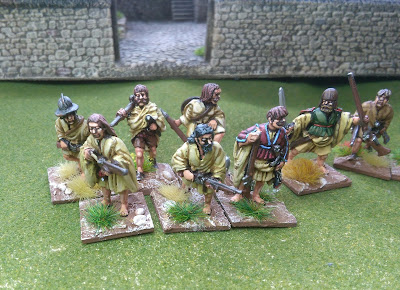 I am now maybe only 20 figures away from enough to game so fingers crossed I can have them on table by the Autumn.
Posted by RogerC at 04:39