I have had some of the fantastic RCW figures from sculptor Leonid in St Petersburg before. So when I saw he had released a set of 10  Kuban Cossacks I decided I needed to have them.

These are now available from Studio Siberia. http://siberia-miniatures.ru/ the box art is awesome. 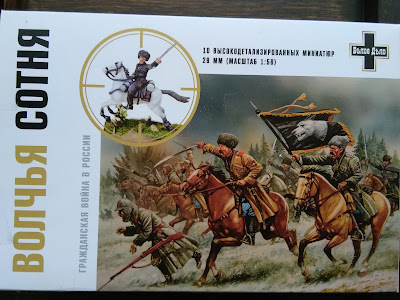 Leonid has already done some Kuban cossacks which I have bought and I planned to add these to them for a further two units if I could. 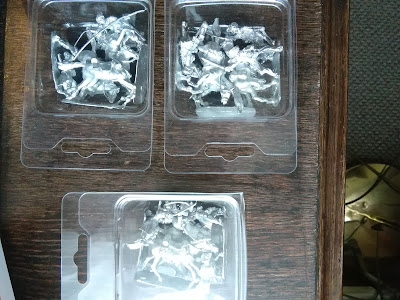 The wolf banner for Shukiros wolves Divizion comes with the box set. Apologies a couple are upside down, I now cant figure out how to rotate them! 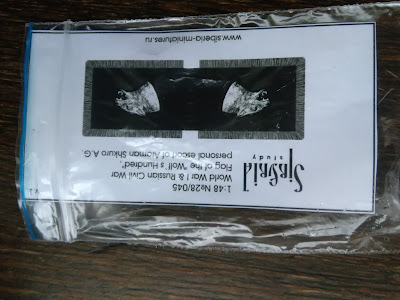 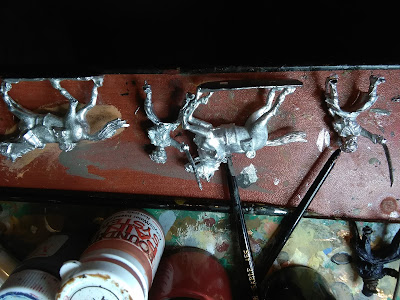 The figures are a reasonable match for Copplestone in terms of size, not quite as a clean and sharp but with much more dynamism in the poses. The big fur hats make themideal for the classic Caucasian style Cossacks. 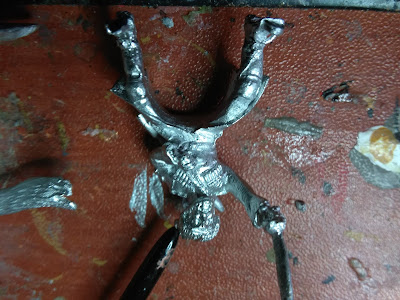 Most wear the long Cherkeska cossack coat but a few are in gymnasterka shirts. A mix of three horses but I had a couple left over from other projects allowing me to mix them up a little. 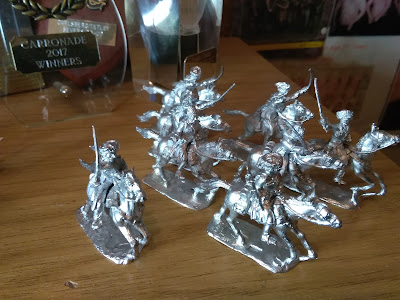 Typically I prime horses white, add a layer of acrylic paint paler than the desired colour then when its dry paint a darker oil colour over the top and wipe off with a cloth so the darker oil catches in all the folds and creases. I use Halfords white car primer which gives a nice even coat. 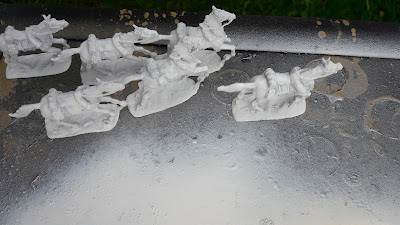 On this occasion I tried using a buff colour to avoid the extra coat of acrylic colour, it was a bit shiny and thick to start with but the end result turned out pretty good to be honest. 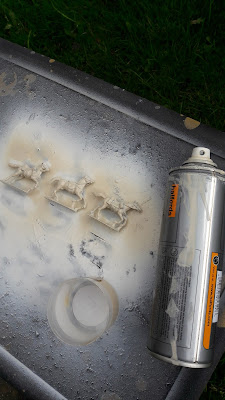 The end result on the horses looks something like the below before I add any detail and colour the mains, tails and hocks. It may sound drawn out but its much quicker than painting them by hand and has the advantage thats its more technique than skill. 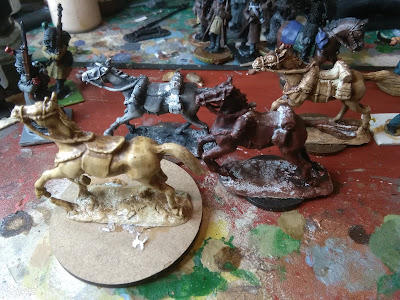 I decided the first ten would be Ossetians, these were a fairly numerous Christian ethnic grouping in the Caucasus mountains and fought through the Great War and the Civil War forming part of the Volunteer Army at one point and also part of the Shukiro's Wolves Divizion too.

Apparantly they wors a lot of civilian gear so I have made their Cherkeska coats a mix of colours as are their fur hats. The Shoulder boards and cloth tops for the fur hats are all in sky blue which is the facing colour for the Ossetians.

I am pretty happy with how they came out, especially the officer with pistol on the grey.

I was asked for close ups so have added a few, again the officer on the grey is a favourite, these two dont comein the pack but are available seperately. 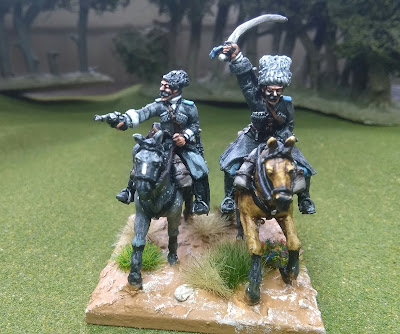 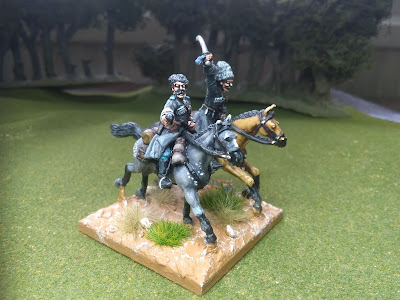 These next two arefromthe pack but have horses from different ranges to add abit of variety. 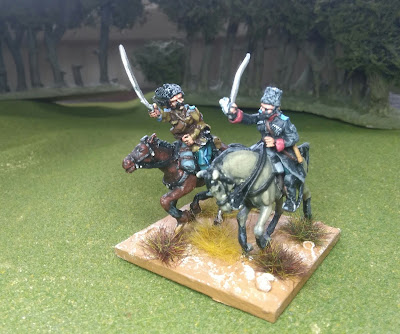 Again these two are available seperately, you can see the chapwith the Swordis the same as the first picture but a different paint job makes him look quite different. 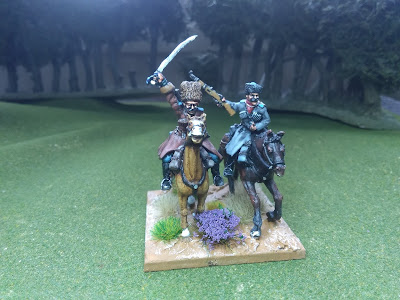 These last two are straight fromthe pack on their original horses, that leaves me 6 more from the pack as the basis for anothe runitof Shukiro's wolves. 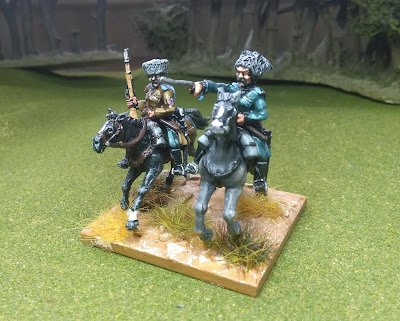 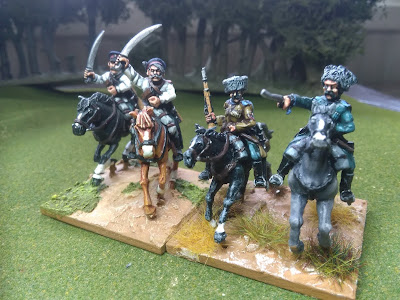 Even more persepective the same unit of Siberian Cossacks in Copplestone and Studio Siberia. Both beautiful models but different enought that I have kept them in seperate units. 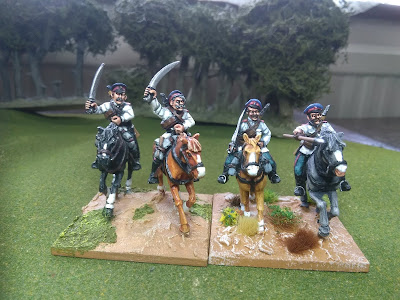 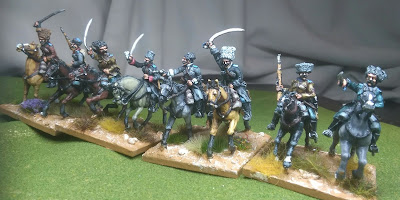 This unit have already seen action on the railway bridge scenario nalthough they arrived just as the Reds conceded so didnt get much involvement. 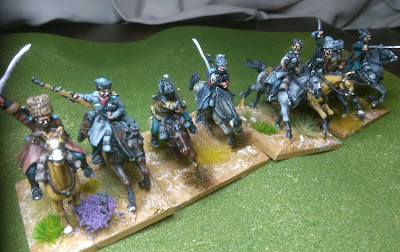 I have already painted the first two from my next unit which will be the Shukiro's wolves with the banner, these guys will be slightly more uniform and have red shoulder boards and cap cloth. That will be pretty much all the White cavalry I want, honest! 6 units of Cossacsk supported by 4 units of Mongolian cavalry should be plenty.
Posted by RogerC at 02:42