For this weeks game I decided to put on a Far Eastern Russian Civil War game at the East Leeds club. The club now has a number of different mats for terrain and this one looked spot on for the Siberian/Mongolian border. Dry but not quite a desert. 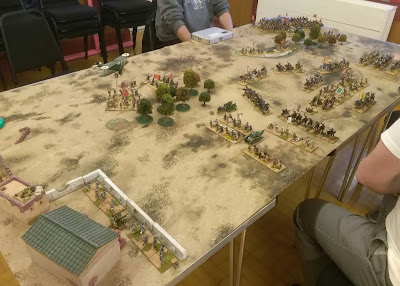 Very loosely based on a historical battle with very few surviving details. The Mad/Bloody (take your pick) Baron Von Ungern Sternburg having taken Mongolia from the Chinese, destroyed two Warlord armies, recruited mongolian cavalry to his cause, declared himself the re-incarnation of Ghengis Khan and the Buddhist god of War decides to invade Russia and drive out the Reds. Seriously I am not making this up, its the literal truth.

Marching his army of Far Eastern Cossacks, Mongolian tribal cavalry and White Russian troops left over from the Civil War, across the border into Russia he was promptly ambushed by the superier Red army who also had the support of aircraft, his army being cut up and driven back over the border never to return. 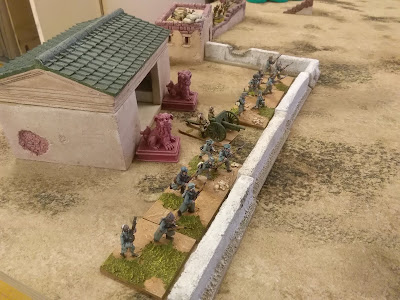 I have taken some artistic licence with the forces, the Baron never had an FT17 and the white regular troops I am using would look more familiar in Southern Russia than the far east for the most part, but I hope I can be forgiven as they look great.

Our game starts with the White forces strung out on the march, their best troops assaulting a monastry/border post held by Austro-Hungarian ex-POW's fighting for the reds and some Bolshevik Militia, meanwhile from the forests on their flanks the better trained red army regulars charge forth to smash into the Barons army. 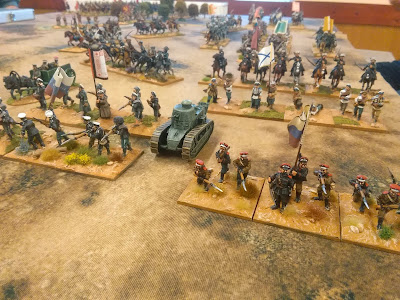 Chris Charlton and Mark command the whites who have 10 units of cavalry from regulars to tribal militia, one tank, two MG's, two artillery peices and 10 units of foot.

The reds have 12 foot, two MGs and 2 Guns but only 6 units of horse, they have access to aircover, in the form of a Sopwith Camel on the roll of a 6, and of course some of them are fighting from cover. It should be interesting. 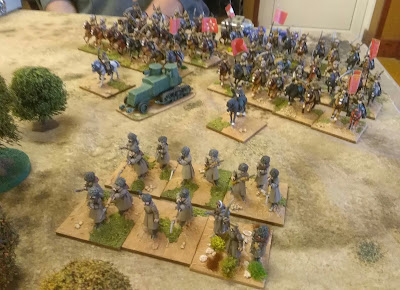 Springing their trap the reds go first and two companies of trained infantry with an MG in support open up on the flanks of the Barons forces causing some significant casualties amongst Marks Mongolian allies. 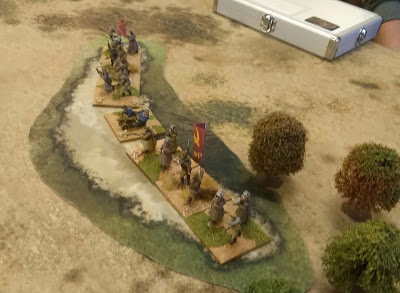 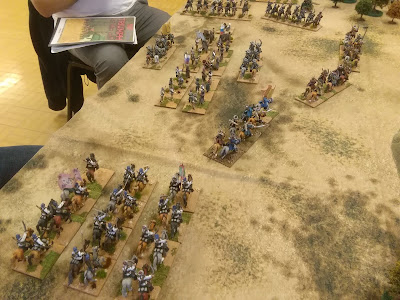 Meanwhile I split my infantry so the seasoned veteran Naval infantry move to support Chris Flowers and the three companies of Militia to support the flank of my border post defenders. The Sopwith buzzes about waiting for someone to roll a decent dice. 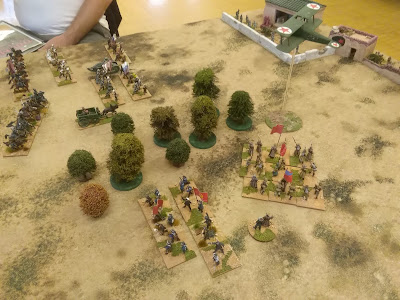 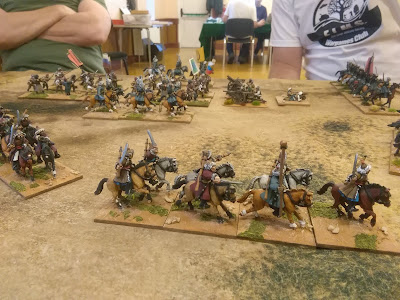 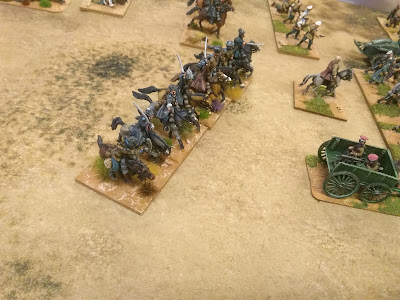 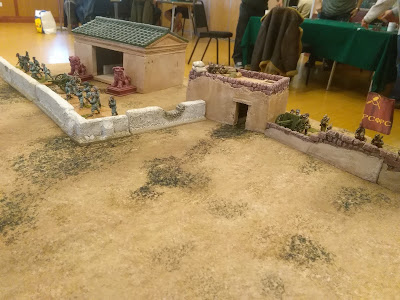 We are using Triumph of the Will rules by Too Fat LLardies. These are really interesting rules with some good concepts, that said unusually for TFL they are not very well written or organised so can be difficult to use. We have essentially taken some of the basic concepts for moving, firing and morale and ignored a lot of the other stuff which doesnt make a huge ammount of sense in some cases.  All that said we do enjoy our much cut down version of the rules which tend to be very bloody. 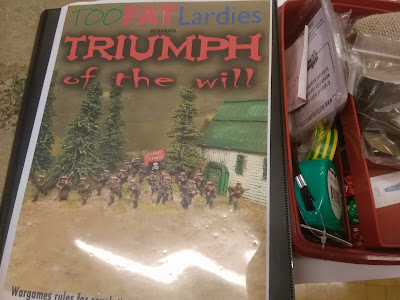 The whites start to sort themselves out into three distinct lumps, the veteran infantry at the front continue their assault on the border post supported by the FT17 light tank, the cavalry in the centre prepare to counter attack the Red ambush supported by the artillery and MG whilst the rest of the infantry start to organise a rear guard.

To keep my Naval troops busy Mark throws a unit of Mongolian tribal cavalry at them, the sailors however are a tough nut and practically destroy the cavalry whilst taking heavy casualties themselves. 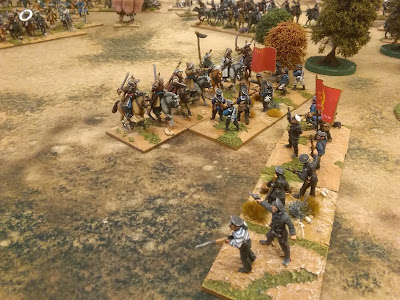 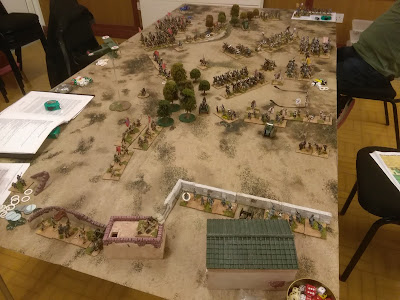 Our turn and the Red Cavalry Brigade begins to push forward towards the centre whilst the infantry and machine gun causes more casualties to the Mongolians who are driven back. The red infantry also begin to push around the forests at the front and rear of the white forces, those at the rear supported by an armoured car. A hit on the FT17 causes minor damage and the Veteran white foot start to take their first casualties. 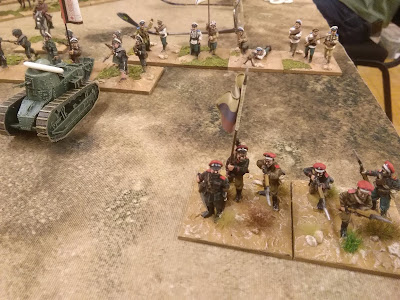 Its the first time I have seen the red cavalry used in one massive block and they do look impressive, you can tell Chris plays a lot of Napoleonics! 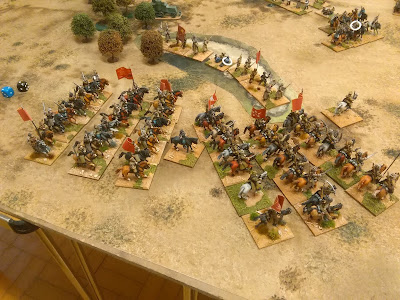 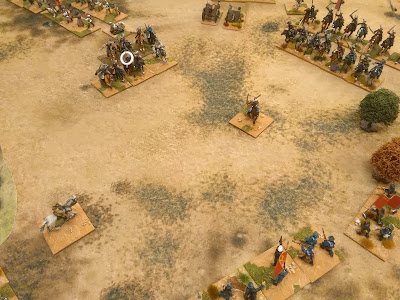 This lone horseman is the sole survivor of the inital mongolian charge and the other units have been driven back creating a vacuum between the opposing forces with the cavalry glaring at each other over dead ground neither wants to be shot up in. 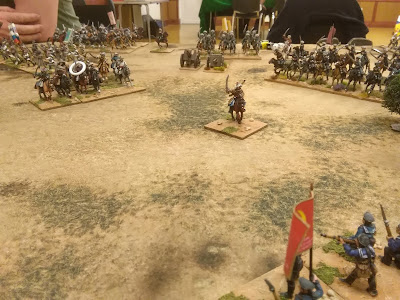 Chris C turns his Kuban Cossacks around to see off the threat of Chris Fs Red Cavalry. The White Cavalry are a more varied lot, these chaps are regulars and aggressive so will get a lot of bonuses when up against the trained Reds. The white do also have Militia cavalry though to even things out. 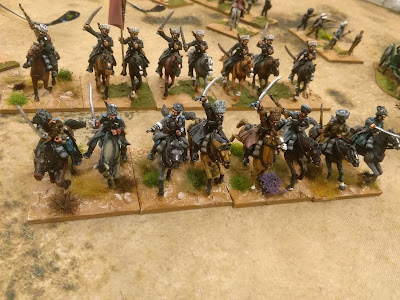 Mr Flowers doesnt get it all his own way though and fairly quickly both his MG and his armoured car are destroyed by the White infantry and MG. 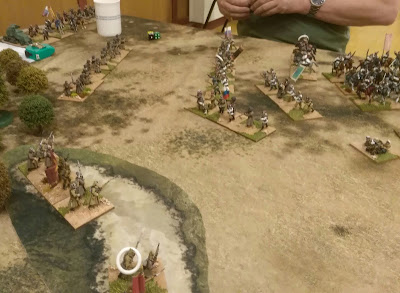 My militia have now got onto the flank of the border post but moving they do little damage to the Whites and are rather foolishly blocking the line of sight of my second gun.

Finally a role of a 6 for the Bolsheviki sees the Sopwith Camel swoop onto the Cossacks who are organising for an attack on the Red cavalry. This can be very devastating indeed, they get 4 firing dice hitting on a 1-4, then re-rolling any hits on cavalry and a 4-6 sees a further casualty, representing the effect of the loud plane on the horses as well as the physical and phscological effect on the troops. As many as 8 hits can be achieved if you get really lucky. We manage 2! 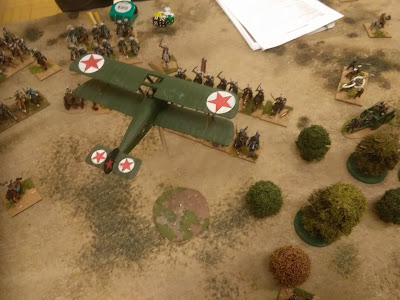 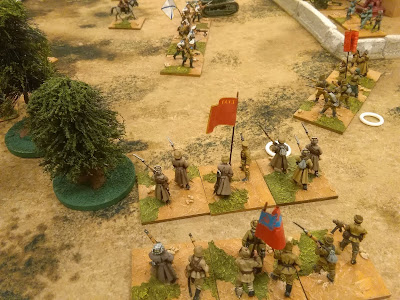 Regardless Chris Charlton closes in with his veteran white Infantry, although another round of firing from my Gun knocks out his FT17., casualties mount on the border post and the Whites break in driving back the badly mauled Austro Hungarian Internationalists then destroying them. 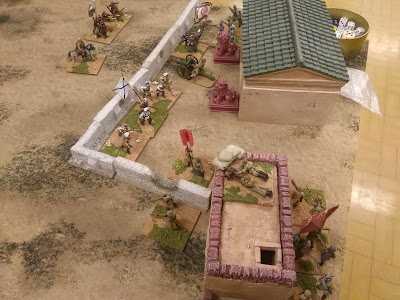 After a lot of eye balling the cavalry finally leap at each other and a massive horse scrum develops in the middle of the table with charge and counter charge by both sides quickly destroying several sotnias from both sides.  The support of the Naval Veterans tipping the balance ever so slightly in favour of the Reds. 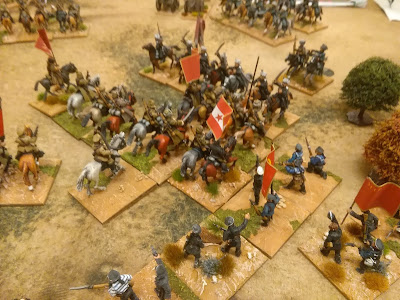 Chris Flowers takes the opportunity to peel a unit of Reds off and charge the White MG in the flank, as my artillery has destroyed the cart mounted Tchanka at the other end of the table all the White MGs have now been silenced. 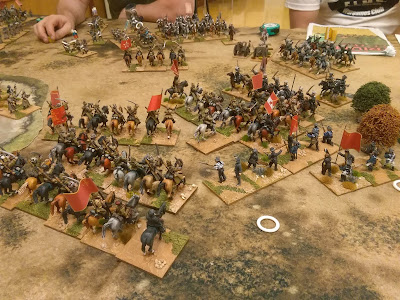 The Veteran Whites charge my gun, shoot up the remaining POWs  and drive back a suporting unit of Militia but have taken significant casualties getting in. 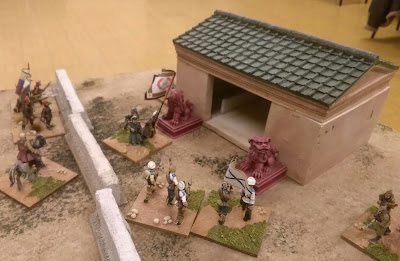 MG fire from the roof of the customs building and a counter attack by a fresh company of Militia see another unit of Whites destroyed and a further one down to just three men. 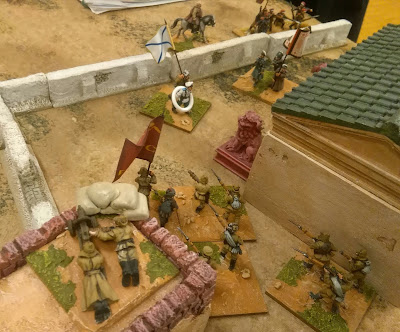 The last of Chris Charltons Cavalry charge the reds but are narrowly beaten and pushed back. 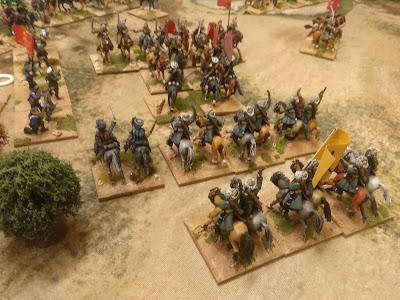 But all is not lost as three Sotnias of Marks reserve cavalry now move forward and the loss of the initial cavalry scrum by Chris C leaves the Red cavalry remaining exposed to Marks guns. 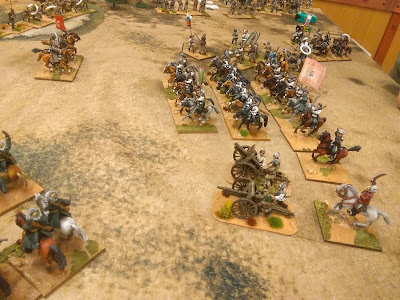 But the Whites have run out of steam and infantry both. The Reds are exceptionally badly mauled but still with several intact infantry units and the Sopwith buzzing around if we ever manage to roll a six again. At this stage the Whites gracefully accept defeat and we pack up after a hard fought and exceptionally fun game. There are a few more photos on the clubs facebook page if you fancy a look https://www.facebook.com/ELMSWargames/ 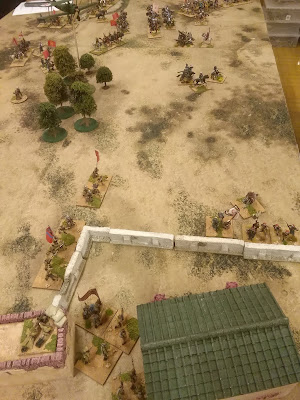 A narrow defeat for the forces of the Mad Baron but his invasion of Russia has been stopped in its tracks and he will have to retreat back over the border into Mongolia, his crusade against the Reds beaten back for now.

Thank you gents for another really fun night. See you all soon.
Posted by RogerC at 01:45

Email ThisBlogThis!Share to TwitterShare to FacebookShare to Pinterest
Labels: AAR, Back of Beyond, RCW