Well the basing department has done me proud and I now have a couple of units to share with you over coming days. First up is my second unit of Cossacks.


Its probably worth saying at this stage I have got completely carried away with the Polish army.


My initial plan was to have a unit of irregular Cossacks, one of uniformed light cavalry and one of Winged Hussars. I "accidentally" got too many irregular Cossacks so three units went to four. I then decided that the redoubt Hussars didn't look that nice so bought a pack of Warlord ones, taking me to five units. It seemed to me at this point that the only cavalry I dint have for Poles was Pancerni, this weekend I saw some TAG Pancerni on Ebay along with more Polish Cossacks, on buying them I find I have enough figures for one unit of Pancerni and two of Cossacks leaving me with enough figures for eight cavalry units. Oops! (Eights an odd number for Brigading I may need another to give me three brigades of three)


Oh and I can use all of these for the earlier period to fight Cossacks, Thirty Years War Swedes, Tartars and Ottoman Turks if I fancy it. Happy days. 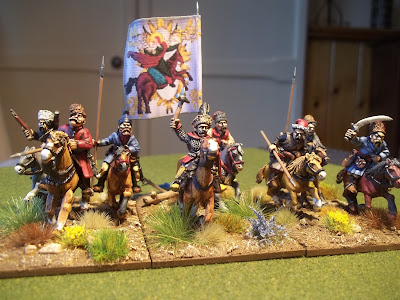 These figures like the last unit are from the Wargames Foundry range and sculpted by Mark Copplestone (Except the Perry Officer) Very dynamic and characterful figures they are too. 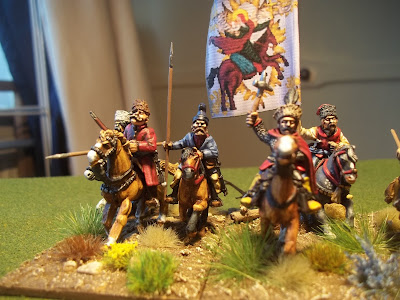 The flag is from a sheet of Cossack standards by Solway miniatures I think. Very eye catching. 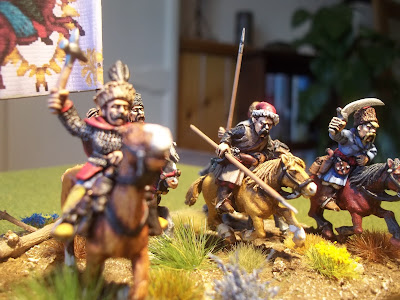 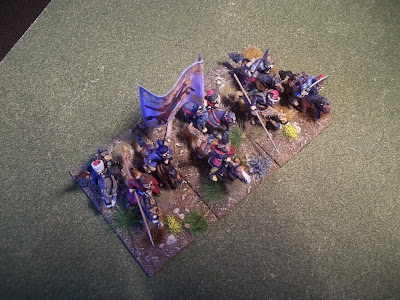 The above picture gives you an idea of the "mob" like appearance of the Cossacks spread over the bases. So plenty more of these to come but not yet.


Next up will be Swedish foot. Thanks for taking the time to read my ramblings.
Posted by RogerC at 02:43