Game night at Steve's again and he had set up a small AWI scenario for Chris Charlton and I to play.

Loyalist Militia must hold a barn with munitions from the Marauding Crown Forces. 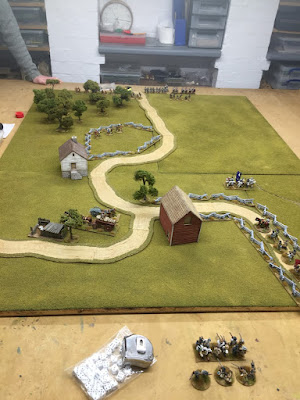 This duck run is a lovely addition to the table. 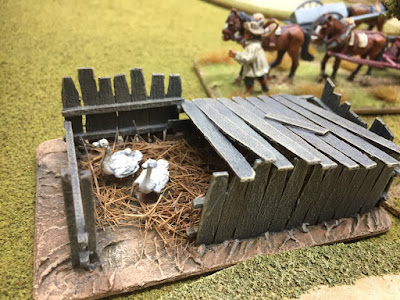 2 Groups of Riflemen with level 2 leaders 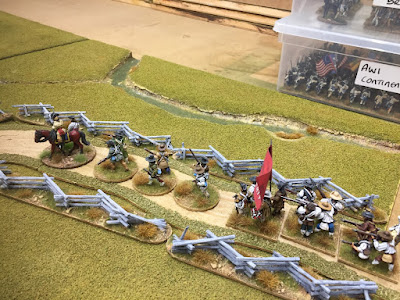 2 Groups of 6 Jaegers with level 2 leaders

So the Quality and Command with the Tories but the Militia have the edge in numbers. 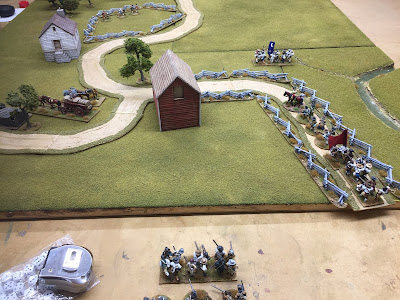 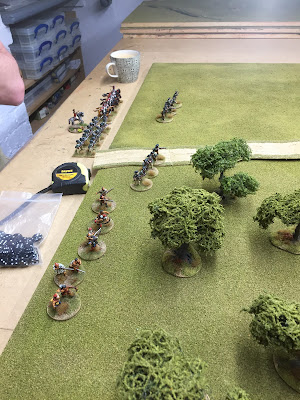 A bunch from both sides are already on table to speed things up with the American Militia skirmishers well forward on the fence line. 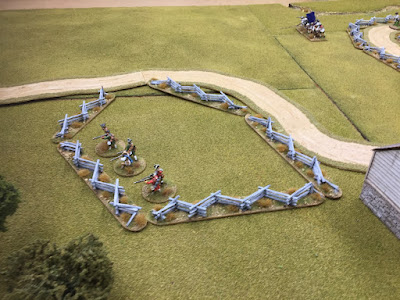 The Jaeger Card comes out and we are in trouble already two moves forward and they open fire killing one skirmisher and giving me two shock. 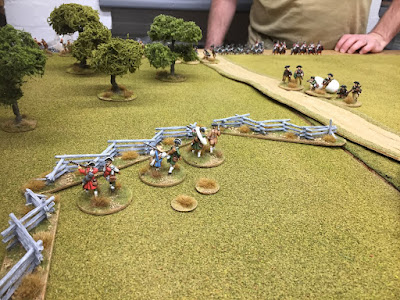 Initially the action is exclusively the Jaegers pushing back the militia skirmishers whilst the Indians sneak around my flank, all three of us feeling this looked decidedly one sided and the Militia were doomed. 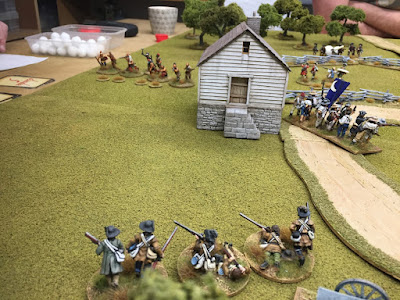 I manage to get my Rifles forward and put some shock onto the Indians before they can get into musket range. The Militia skirmishers put a casualty on each unit of Jaegers, however the Militia are already at half strength and carry some shock. 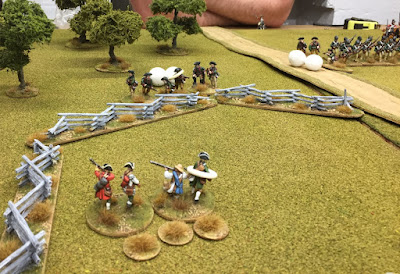 The cavalry start to get forward on my right flank but I am not too concerned as none of my troops are in the open. 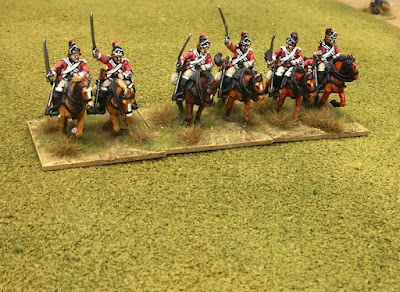 The cavalry close on my left and the Rifles snipe one out of the saddle whilst two Militia units volley the British Legion and start to inflict casualties and shock slowing them down. 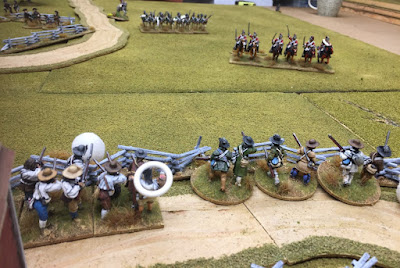 Before you know it the cavalry are on my rifles and the fence apparantly provides no defence or obstruction at all. So with dice removed for no bayonets and not loaded the cavalry wipe them out to  a man and I loose morale points, taking just one horseman in the process. Oh dear! 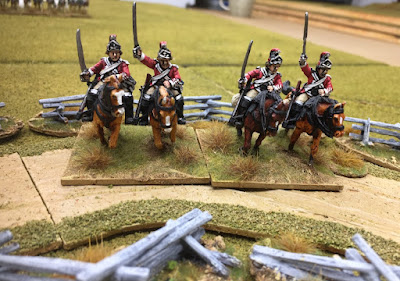 Meanwhile my third militia unit joins the left hand rifles in pouring fire into the Indians and they are in real trouble with a massive amount of shock. 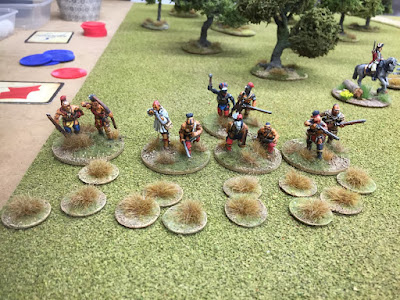 The cavalty meanwhile turn around and prepare to charge the Militia unit on my right flank. 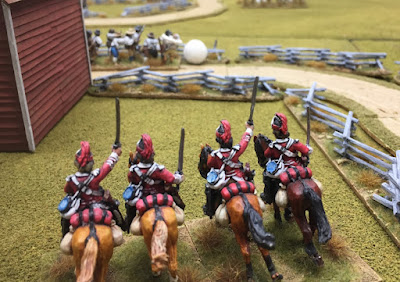 The Indians are forced back to the edge of the woods and my remaining two militia skirmishers run into the cottage. 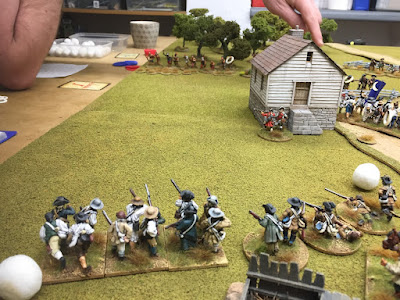 The Jaegers are on my flank but I cant bring the Militia under control so they keep blazing away at long range at the British Legion whilst taking casualties from the Jaegers a stones throw away. 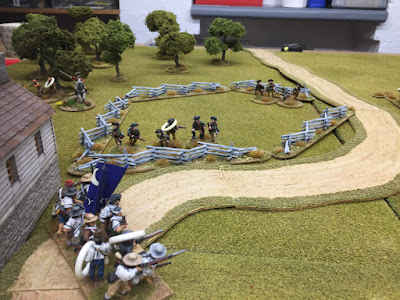 The British Legion are in a bit of a mess but the Cavalry have swung the tide back in favour of the British. 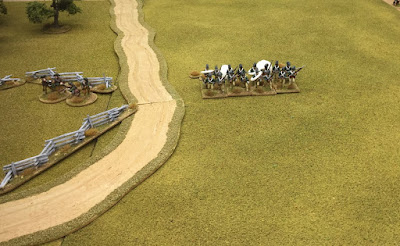 The cavalry charge the rear of my Militia who I am again unable to bring under control and so ignore the threat blazing away at the British Legion, a short bloody melee where the Militia have just one dice sees 8 of the Militia cut down and the other 4 flee. 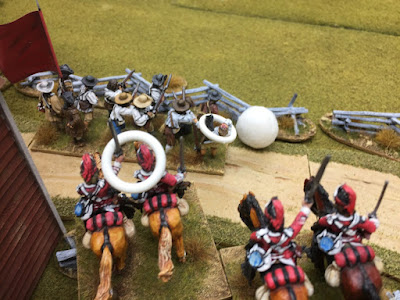 My next unit of Militia has Jaegers on one flank and cavalry on the other, true to form I am unable to bring them under control and they continue to fire at long range at the poor old British Legion. 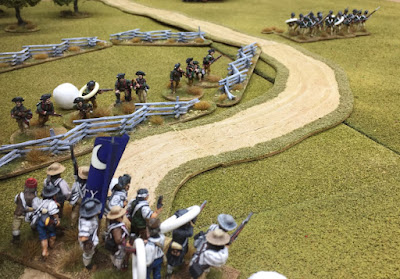 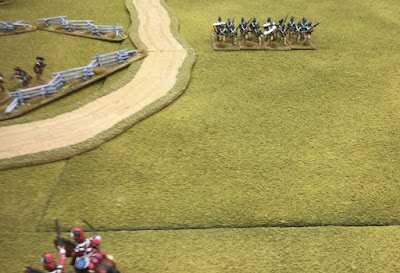 So the Cavalry charge for a third time, again I am unloaded and without bayonets. The result seems a forgone conclusion 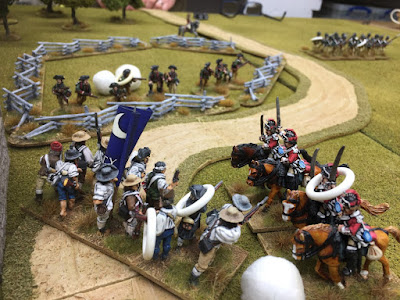 Chris rolls the most amazing dice and my Militia are wiped out.  A volley into the farmhouse from the Jaegers also sees the last of the Militia Skirmishers cut down. 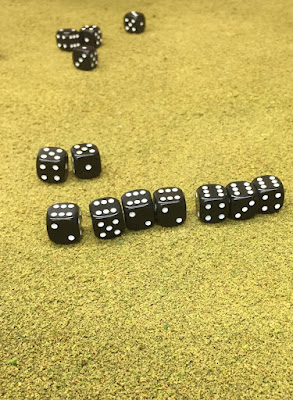 My force morale is gone completely and I have just one group of Militia and one of rifles remaining, a complete victory for the Tories. 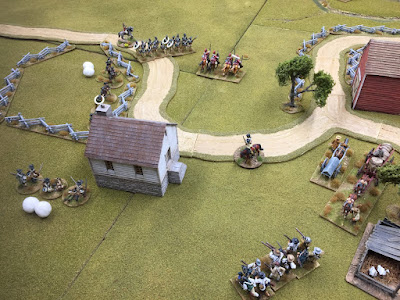 Really interesting, we have not used much Cavalry in the past and they were a real game winner in this instance. We rarely get such a clear Victory, well done Chris I was thoroughly whipped. Our games often switch part way through with sides having the upper hand this one switched from British to American and back again.
Great fun thanks guys.