So to prep for the game at Partizan I wanted a game so we could iron out the unit stats and make sure everything worked with the rules etc.

We have yet to find a bespoke set that capture what we are looking for so Black Powder is our fall back set with enough flexibility and most of the players having used them before they will give us a decent game. 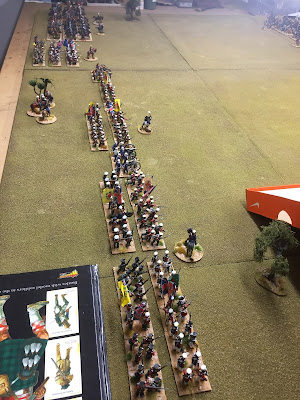 We use a modified version of Black Powder whioch gives us a much closer game to the one we are looking for. Details elsewhere on the blog. 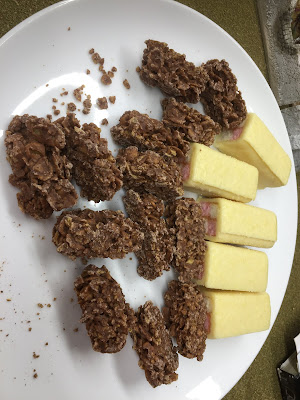 The British have three brigades of foot, the outer two having one battalion of Queens and 2 of company troops whilst the middle unit has 2 quenns (European) regiments. Two batteries of guns support eh Foot whilts two brigades of Horse cover the open left flank, each with one Queens regiment, one Native Light Cavalry and one Native irregular cavalry. 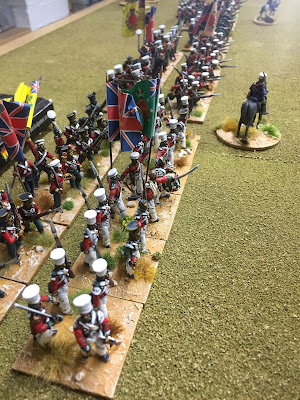 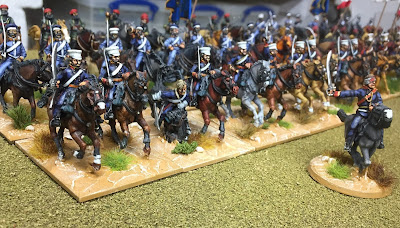 The Sikhs occupy a walled village, The 6 battalions of regulard with 2 batteries of guns in the cnetre, the two brigades each of 8 battalions on the left and a horde of cavlry on the right, circa 8 regiments. 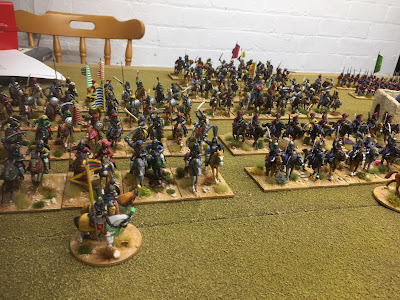 Wiht the stats giving the British regiments all the historical advantages they had and the Sikhs holding the walled the village and having the numbers it should balance out quite well. 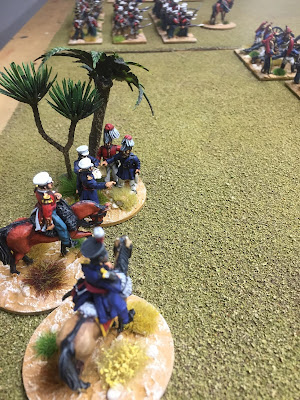 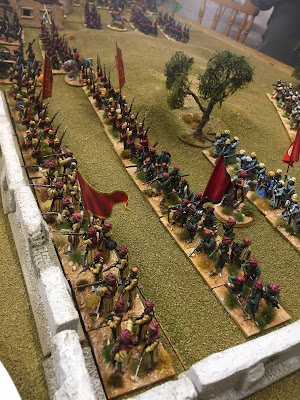 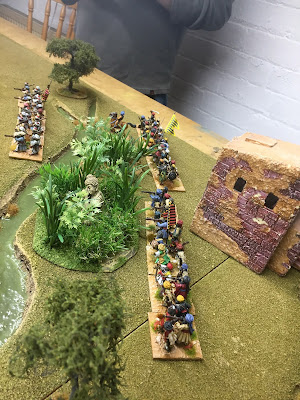 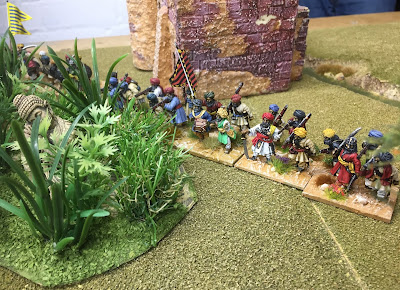 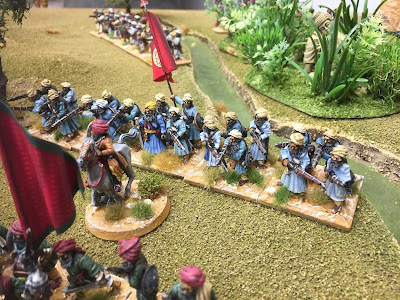 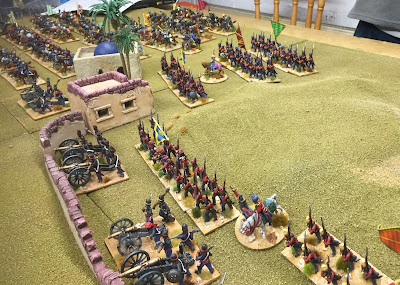 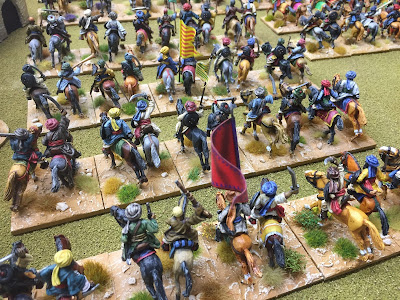 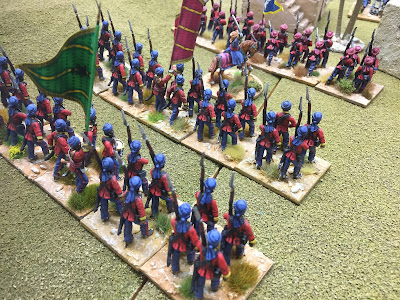 Chris commanded the British and wasted no time in throwing his forces forward, his British cavalry leadign the charge did not quite reach my Sikhs but had leapt ove rhalf the table, the Centre British Brigade also made good time with the other two flankign brigades taking a little more time. 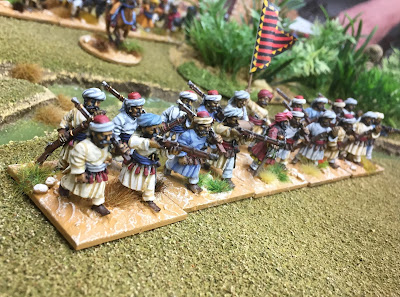 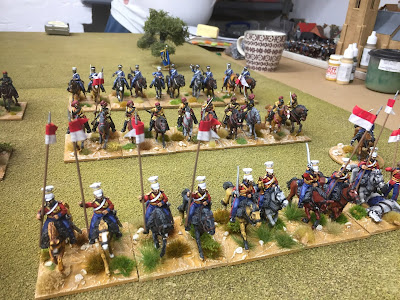 My artillery open up some ineffective long range firing and my first two brigades of cavalry charge to meet the British. Foolish you would be forgivn for thinking. 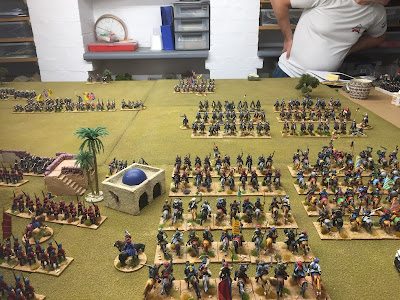 On the left my first unit of cavalry are quickly sent reeling and Chris ounces straight onto the next where I amnage a draw. The British lancers howver, best troops on table, manage to roll an unfeasably large number of 1's in combat then follow it with even more 1's for morale and route off table. Unbelievable. It has to be said this was the high water mark for the Sikh Cavalry. 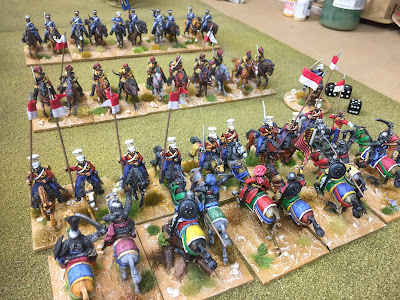 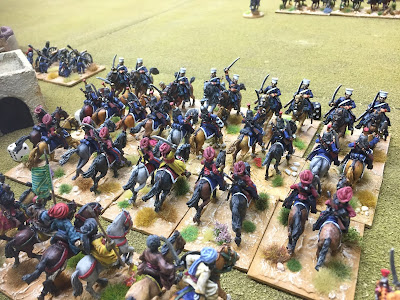 Wasting no time, in Chris's turn he promptly charges in again and sees off two more units of Sikh cavalry. 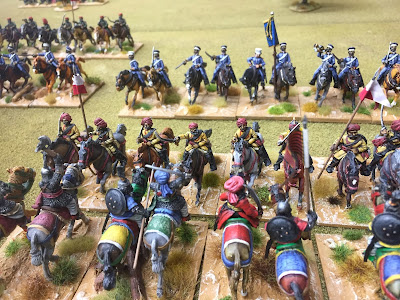 The British foot continue a steady advance under Sikh artillery fire and the Sikh right flank foot begin to prepare for the inevitbale destruction of the Sikh cavalry. 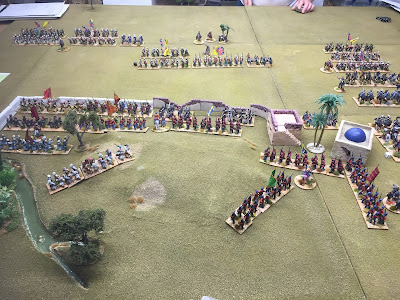 Three batteries of Sikh artillery are not inflictign loads of casualties but plenty of disruption slowing the British foot down. 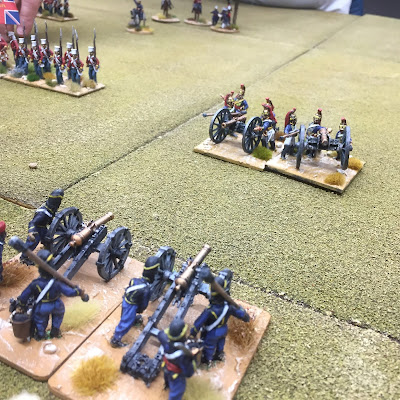 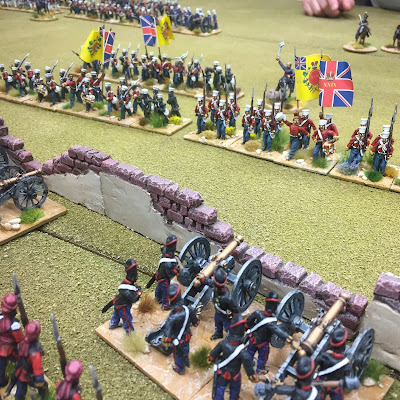 On the left the British charge the wall of the village and are held by the Sikh irregulars. 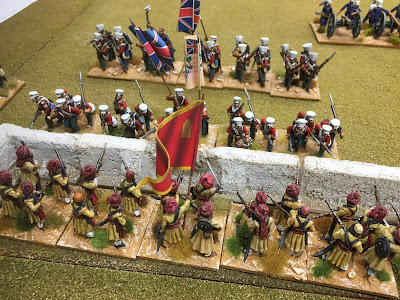 Its hottign up now with the British closing on both flanks and the cavlary being gradually decimated by the superior British and Indian troops. 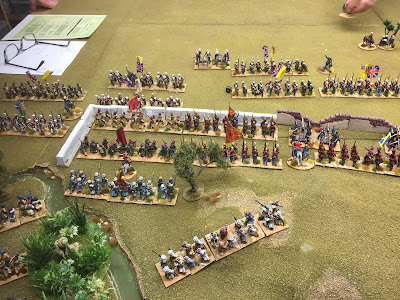 Two more rounds of melee and the Sikh Matchlock troops are still holding off the British, the artillery are poundign the rets of the brigade and keepign it at bay whilst the left most unit is disordered by an accurate voley of Matchlocks, the cavalry meanwhile have taken more casualties and a Brigades break test is required for the first briagde, they fail and a whole briagde is drivern off table. 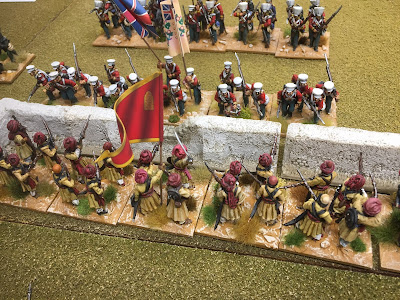 The Sikhs have been holding firm int he centre but the British guns unlimber and fire with the support of the Sepoys and the first battalion is driven back. My yellow coated irregulars are finally beaten by the British and break, the cavalry have another failed brigad break test and I am down to two shaken units against Chris's four undamaged troops. 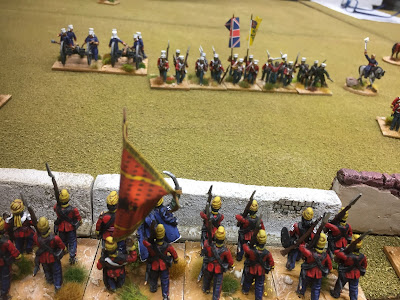 Things become desperate and on the left my matchlockmen are seen of by the sepos, the spear armed mob behind thme charge in and are in turn broken by witherign fire.
I lose two battalions more of matchlocks who volley and charge the British at the wall only to be broken and finally the last of the cavlry are charged and break. 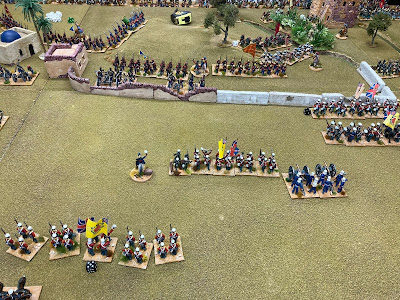 The rows of destoyed Sikh troops fill the table edge and only two units of British have been seen off.  Whilst the Sikh regulars still hold firm in the vilage a fresh brigade of British and Indians are poised to swing around my rightand the position is untenable. I accept defeat and we finish off the cake. 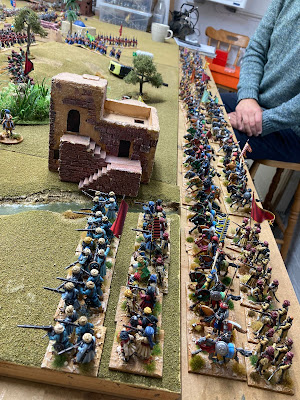 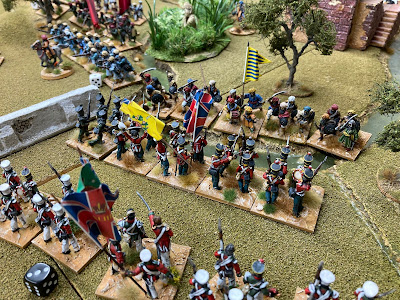 A fun game which has given me some ideas for tweakign the artizan show game and provided some good fun for all concerned too.

Thanks chaps see you at Multan (Newark) soon.