So I got home from a couple of days away with work to this beauty.

This has been my first Kickstarter and really impressed by the whole thing, what really stands out is mainlyhow Iain has communicated the whole way through.

And the first thing you see on opening is more of the same, great communication and messaging. 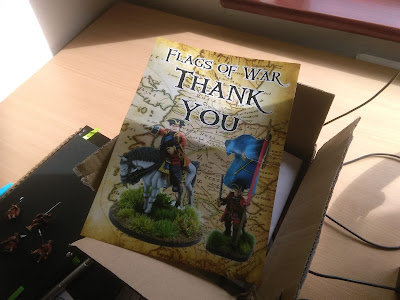 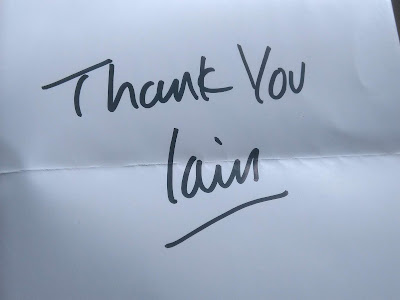 An the second thing is sweets, the way to my heart! 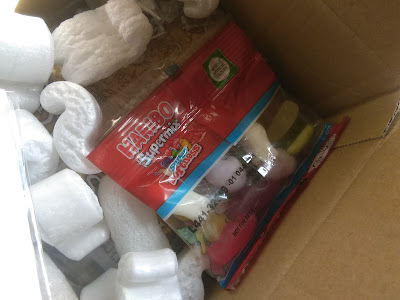 The Kickstarterm, as well as being well handled, gave people who pledged some great rewards. A free flag for every 5 packs, 10% off pack prices and free figures as pledge goals were reached.

I seriousley considered this when the Highlanders were released through Kickstarter but held off, the release of the Government troops was more than I could handle especially with the quality of figures already produced so I waded in, initially with 15 packs and then added a few more at a later date which Iain ensured got added to the same order to reduce my postage.

So as well as my free flags I also got a couple of Jacobite flags too, Generic Jacobite in red and Royal Ecossais to compliment Cobhams Dragoons, Barrells foot and the Glasgow Loyalist Militia. Below in order from right to left. 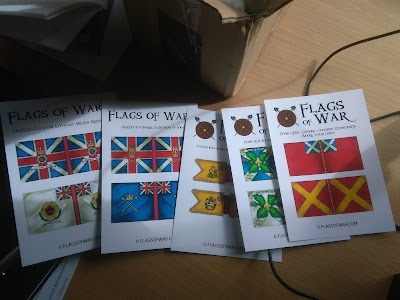 The Dragoons were the first thing I opened and they are absolutely lush. Really pleased I got these. Dynamic and characterful, like all the figures they are also really clean of flash.

If I have any criticism there are two horses and I would really prefer 3, the riders fit OK rather than perfect but these are tiny quibbles with some fantastic sculpts. I have two packs of these, added to the command thats 9 so an 8 man group for Sharp Practice and a leader figure. 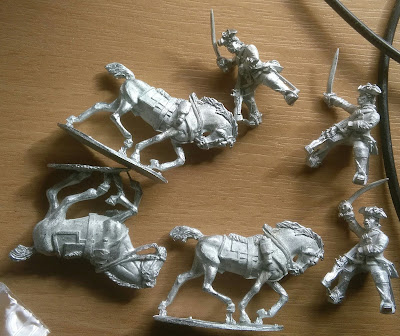 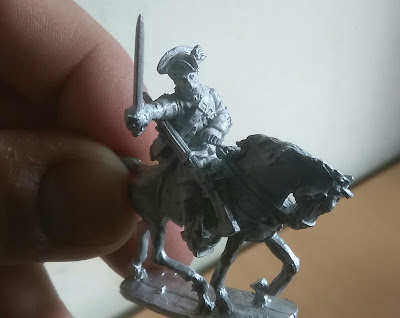 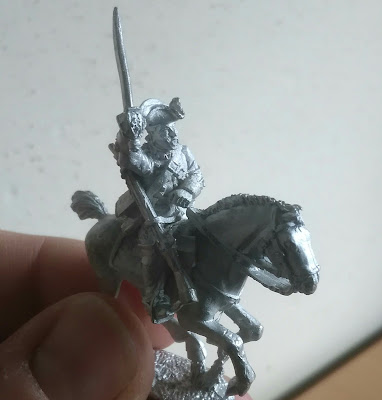 I particularly like the Royal Ecossais command, this standard bearer looks great. 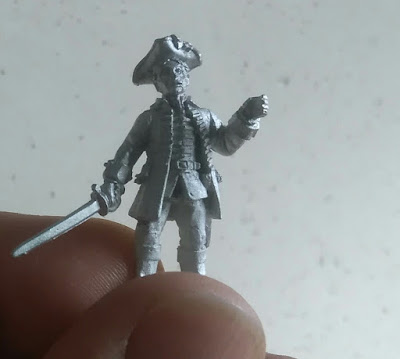 Here is the haul as a whole, I was a bit giddy like a kid in a sweet shop. 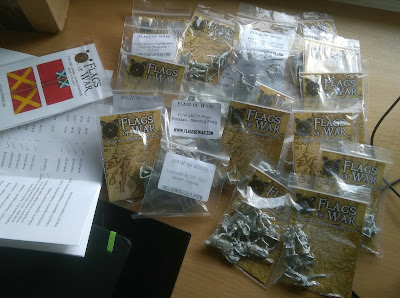 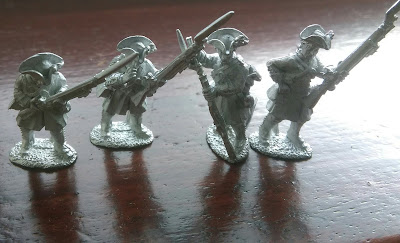 The command pack is also great and in keeping with the firing line, particularly like the Standard bearers. 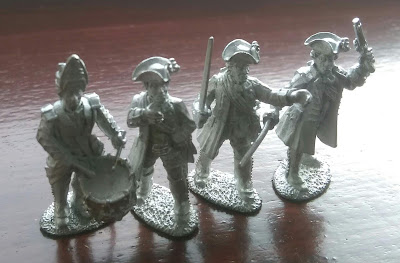 The firing line is also nice, I prefer the loading pack if I am honest but they do complemnt each other, the bayonets are chunky and robust but I may still put the firing figures in the rear rank so the base and front rank helps stop the bayonets being knocked off. Two packs of each of these gives me two groups, if I add the command to the Grenadiers thats three. 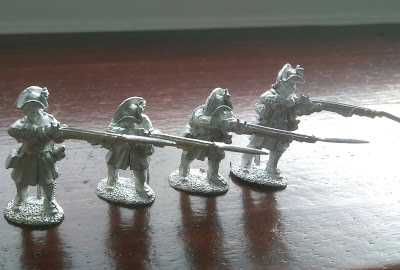 The Grenadiers currently only have a firing pack but a loading pack is planned for the next release along with Baggots Hussars which I really fancy a unit of. 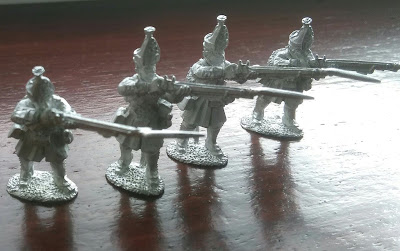 The cavalry command pack is lovely the Mounted officer though is probably my favourite figure from the whole range, dynamic and full of character I love this figure. 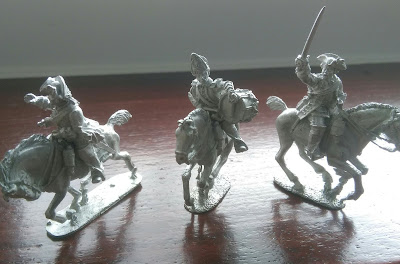 The Duke of Cumberland (The Butcher as he was known to the Jacobites) is another great sculpt capturing the character of the man himself for some reason I bought this figure when I already got one free with the pledge! Still sure he will come in useful or someone may want to do a swap. 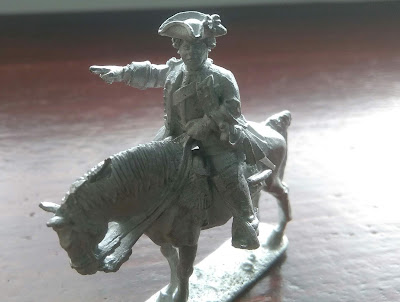 Although part of an earlier release I also picked up some Jacobites with these guys. The Royal Ecossais command is probably my favourite pack of the range, they are just lovely. Cant wait to paint them. The Kilted NCO is particularly nice. I am really looking forward to these with the fantastic flags and just hope I can do them justice. 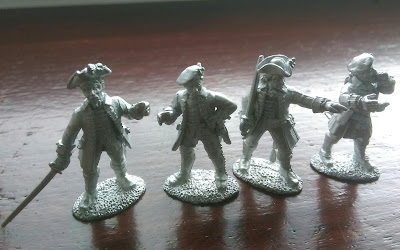 The Ecossais firing line is also great, I have two packs of the Kneeling fellas, more of these are planned so hopefully loading for both standing and kneeling will give this a more diverse look. I am tempted to give these a grimy look over their white overalls but lets see. 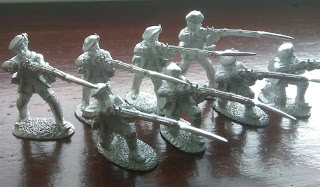 I picked up the Lowland command pack to add to my other Lowlanders, another lovely set, I had to photograph these again as I delted the original. The Cockades do mean I need to decide if they are Jacobite or Loyalist before painting them but given the aggressive dynamic poses I think they go too well with the Flakgs of War Jacobites to sit anywhere else. 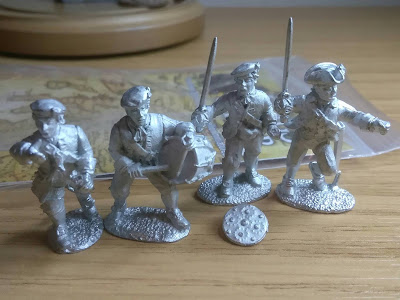 The Highlanders I have not made much of a start with just a couple painted so these will be handy, again dynamic figures which paint up really well, one lost his bayonet as I tried to bend it back in shape as it was bent over in the bag, a bit of this is inevitable with bayonets but these figures do have quite robust bayonets. 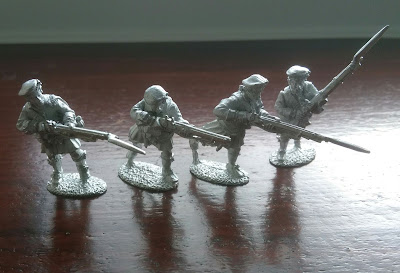 The command pack is again lovely, I particularly like the shouting NCO and the Officer in great coat just like the plate in Like Hungry Wolves. 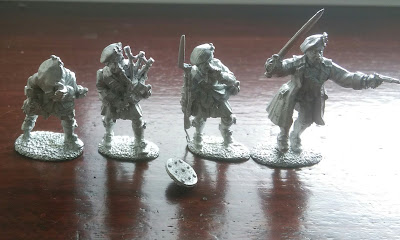 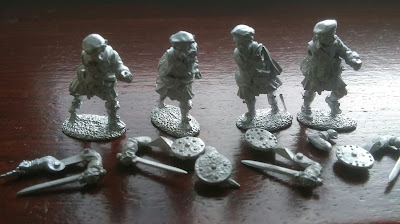 Two sets of highlanders with swords complete the purchase, one in shirts and one in jackets, they come with seperate arms so each figure can be in a variety of poses as well as different colour schemes and maximum variety can be achieved, this is a really good idea for creating varied looking units.  Agin really looking forward to getting stuck into these. 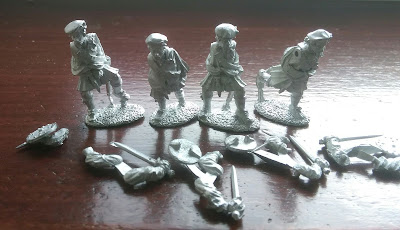 So with so much arriving at once I guess my only dilemma is where to start, watch this space, I will share my progress with you.
Posted by RogerC at 16:05

Email ThisBlogThis!Share to TwitterShare to FacebookShare to Pinterest
Labels: Jacobite