Steve was keen to run another Great Northern War game, he wanted to see if the Allies could stand up to the Swedes without all the field fortifications. To balance things the Allies would have almost double the amount of cavalry and an increased number of guns.

We also fielded a formation of cookies which was quickly overwhelmed. 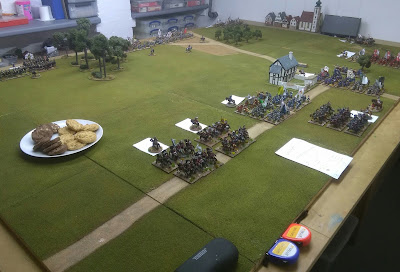 I made a rookie error and left a box of 6 battalions of Swedes at home, we had to substitute 3 of the Swedish battalions with Saxons for the purposes of the game. Doh! 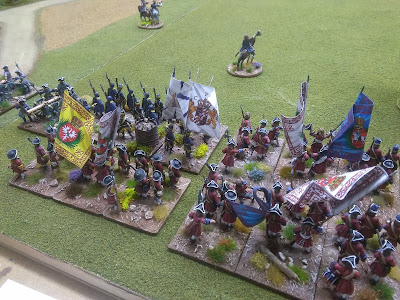 The Swedes had 5 regiments of horses on their right in two brigades, 8 battalions of foot in the centre in 2 brigades each with a gun and a brigade of 4 battalions of Guard on the left giving them a total of:

All Swedish commanders were good. 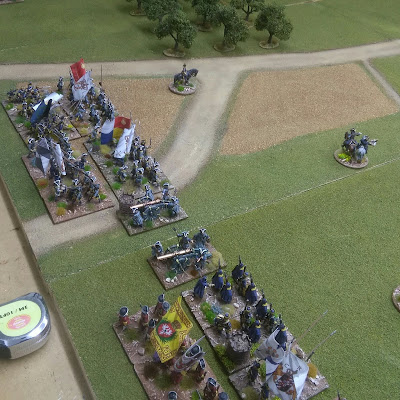 The Dano-Prussian army had a brigade of 2 horse on its extreme right with two brigades of 5 foot and 2 guns in the centre then a further brigade of 5 foot with a gun on the left supported by a battalion in the village and 7 regiments of horse on the extreme left giving a total of :

All commanders were average. Most of the Allies were average troops with a small smattering of superior and inferior troops added. 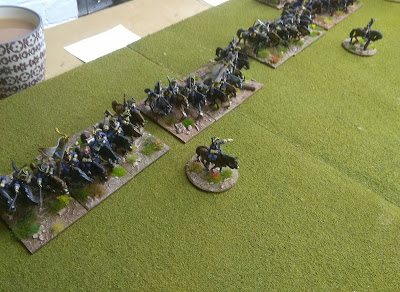 The Swedes opened proceedings and the 5 units of cavalry immediately rolled a 9 and belted forward 36 inches to end within a move of the Allied cavalry. The foot managed a more sedate single move of 8 inches for each brigade.

The Allies responded with an ineffective long range bombardment and marched forward to start forming their defensive line running from the village either side. 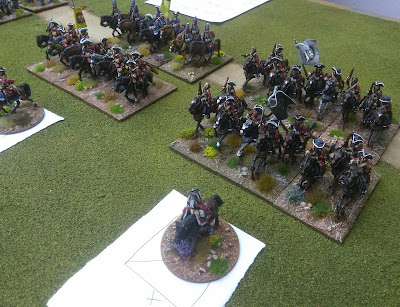 I should also just say that for large parts of the game I got caught up and forgot to take lots of pictures. Sorry! 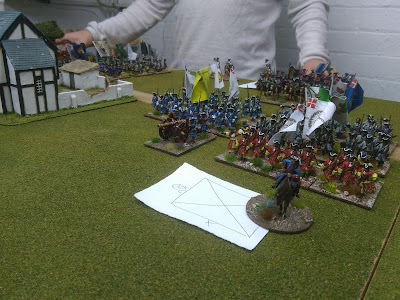 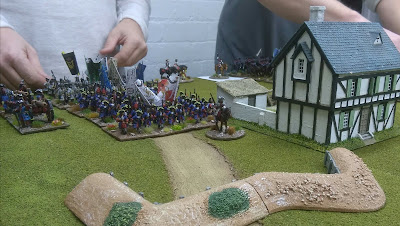 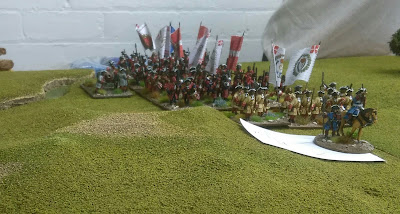 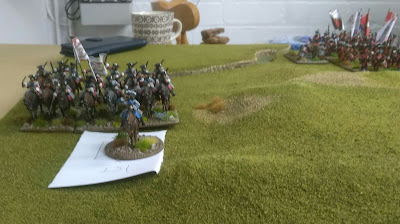 Next move and the Danish Horse under Steve charged my Swedes who counter charged, The Swedes with their ferocious charge re-rolls quickly destroyed the Danes and followed up with a sweeping charge into the next Danish Cavalry unit who, unable to counter charge were also immediately broken. great news except that now the three casualties inflicted on the Swedes meant they were stuck in the midst of the Danish cavalry and shaken leaving them unable to counter charge next move. The second melee was almost a carbon copy of the first with the first Danish horse destroyed and the second forced to retreat disordered but the Swedes were again shaken. 4-0 to the Swedes. 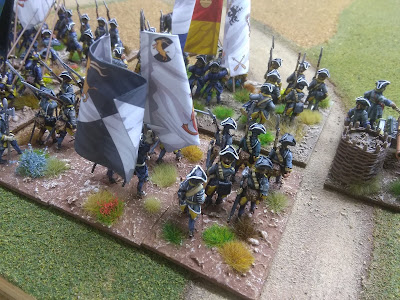 Seeing how things were going Mark started moving his 2 units of cavalry across the rear to support the Allied left. Meanwhile the Allied foot continued to deploy and more ineffective long range gunnery crossed over no mans land. 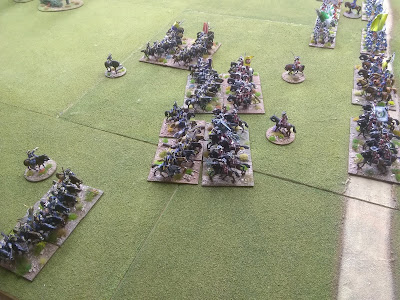 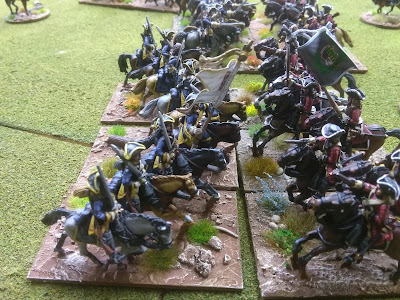 On the right the next lot of Saxon horse charged the Swedes, I had manoeuvred one unit to cover the damaged ones so Steve couldn't charge the shaken unit, with no other obvious targets the remaining Swedish horse found itself lined up against a battalion of Saxon foot, so in the spirit of play testing I thought I would have a go at charging it. 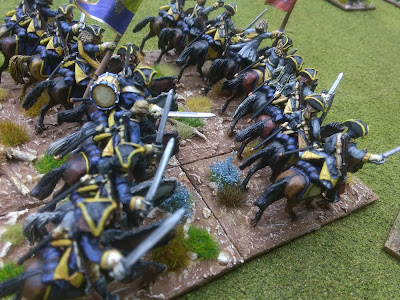 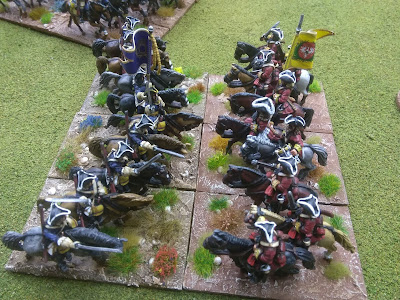 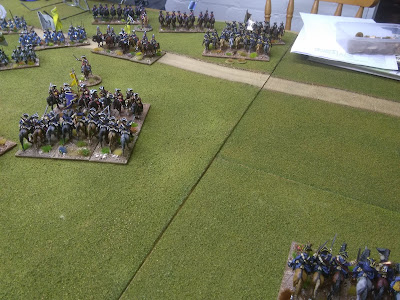 My foot started to get moving at last, as did Marks and we closed on each other with the centre brigade marching through an orchard to deny the big Allied guns a target and forcing the artillery for both sides to engage in a futile long range anti battery duel. Please ignore that three of these are actually Saxons in reality! 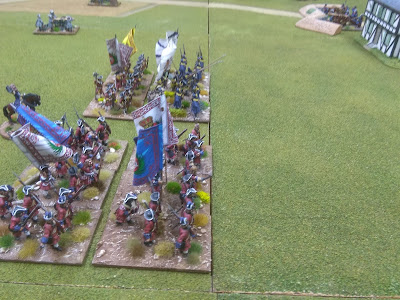 A fierce melle ensued on the right with more of the Allies being forced back eventually. 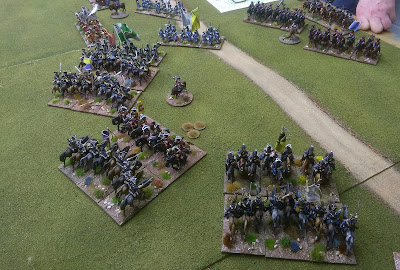 But the Allied foot saw off the first unit of Swedish cavalry and the Swedes now had something to worry about. 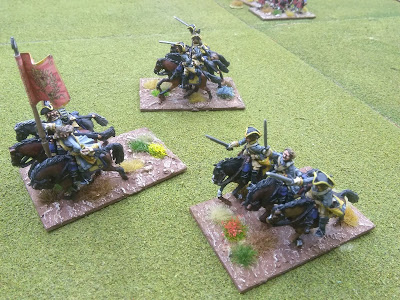 The mellee finally went the way of the Swedes, however three out of four remaining cavalry units were now shaken and useless in terms of go forward, 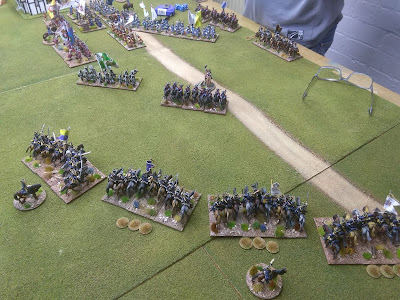 Steve now marched his heroic Allied foot unit forward to fire into the paralysed horse and I charged my remaining un-shaken unit at him. I forced him to retreat but the last unit of Swedes was now shaken and unable to move forward. I was forced to pull the whole lot back out of charge range of the Allies to try and re-order them. 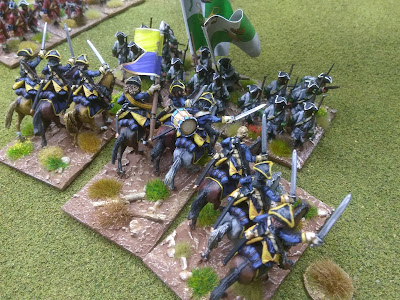 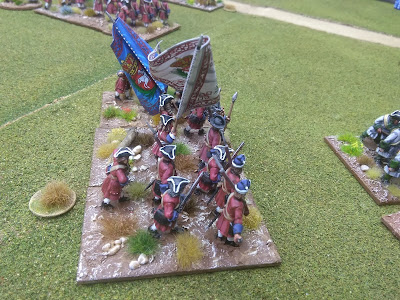 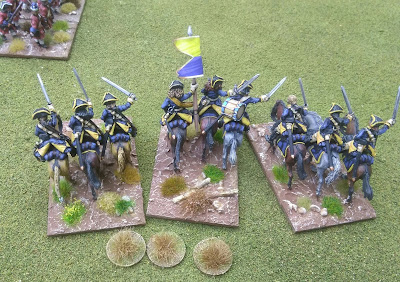 On the left the Guard were now in a position to charge, Mark managed to dis-order them but the guards ability to roll dis-order off on a 4,5 or 6 saw them charge home and destroy the first two units of Allied foot, two more dis-orders saw the Swedes forced to stand off and trade unequal volleys, only having 2 dice due to one third pike vs the Allies 3. 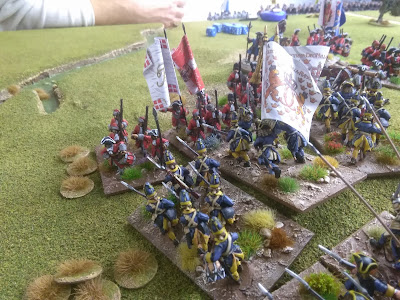 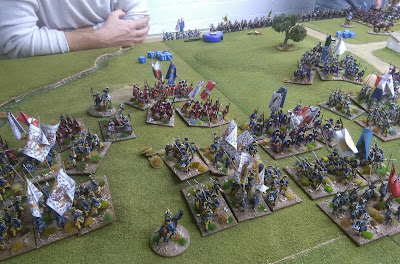 In the centre the Swedes had finally come into charge range and seen off two battalions of Allies, however 3 out of 4 foot units were now badly mauled and being shaken were again forced into fire fights with the second line of Allies. The whole of the centre and right of the Swedish line was in trouble. 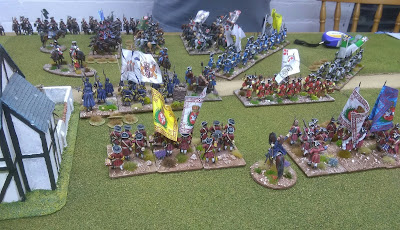 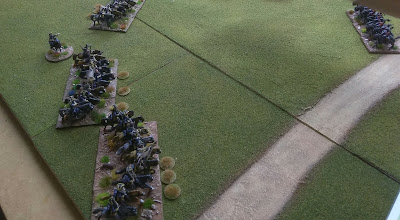 However on the right the quality of the guards looked set to snatch victory from the jaws of defeat, charging the second line of Allies another battalion broke and the fourth was pushed back, a brigade break test sees the whole brigade break

The rest of the Swedes push forward despite galling fire from the Prussians and the heavy guns. They take heavy casualties but destroy another unit of Allied foot and with nothing to stop them the Guards now start to turn in and prepare to roll  the allied flank. 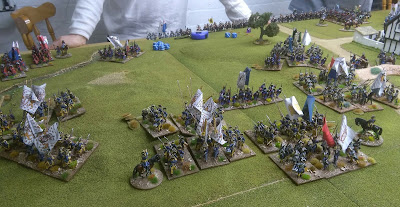 8 battalions of Swedes now start to grind remorselessly forward and the Allied left is pretty much doomed. 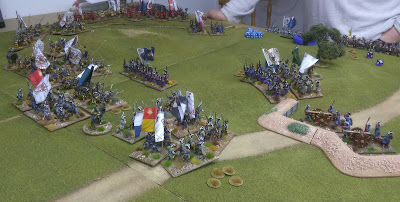 The Swedish horse and right hand brigade have been stopped but the Allies facing them must remain in place to stop them recovering. The Allied left might manage to inflict enough damage to stop the central brigade of Swedish foot, but the guards have nothing to stop them pushing through the remaining Allies and taking the day. The Allies accept defeat at this point. 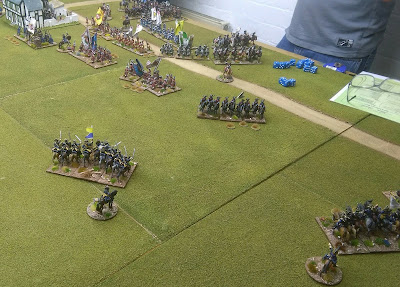 Mark in particular found the challenge of being unable to stop the Swedes with all their multiple advantages in attack demoralising, the numbers and artillery do address the imbalance to a point but its still less fun to game the Allies unless you have got your head around losing your first line to sap their strength.

A couple of tweaks suggest themselves, such as a dis-order from closing fire stopping the cavalry closing on foot. The alternative is to ensure the Swedes don't always have their best troops available. The Guard only really fought with the King in the main field army and although their commanders were usually a lot better there were occasions where a less able Swedish commander was out generaled by an Allied opponent. so removing the Guard and downgrading some generals to average may address some of the imbalance.

A good game non  the less, thank you Steve for the hospitality.
Posted by RogerC at 11:48