I was invited by Colin Ashton to play in his re-fight of the battle of Ferozeshah from the first Anglo-Sikh War at the Stockton Battleground show. As I was double booked with bag packing for my under 8's I didnt get there till twelve, gutted as this was a truly awesome spectacle. 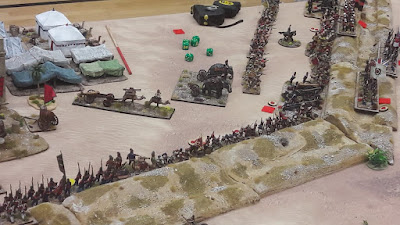 Colin had two pop up Banners for the game along with bespoke flyer handouts, he had really gone to town organising this game. I was really impressed. More detail on Colins blog http://www.carryingsonupthedale.com/ 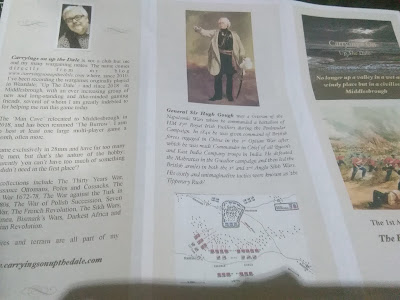 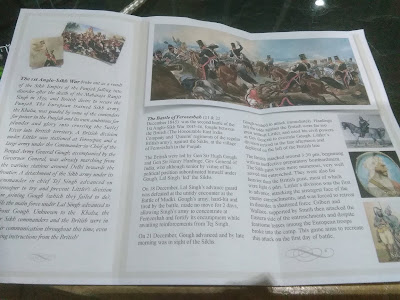 Ferozeshah was the second battle of the First Anglo-Sikh War and a very bloody affair, the Sikhs were well entrenched with numerous big guns and ready for the British and Sepoys. Gough commanding the British army favoured frontal bayonet attacks and if this wasnt bad enough the various brigades became disjointed and went in piecemeal. Fortunately for Gough and his troops the Sikh high command had no intention of winning otherwise this would almost certainly have been a very bloody repulse. As it turned out the British snatched an unlikely victory from the jaws of defeat. 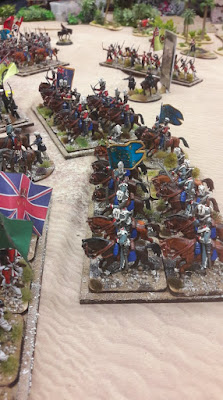 Colins game included all the original forces for this battle and started them from their historical start points. We were using Black Powder 2 and Colin had made a number of tweaks to the rules to reflect the historical make up of the forces, He had also changed them firing before movement, an alteration we have used in our own amendments.

As I arrived the British were poised just in musketry range of the works to pour in a volley and charge through the smoke. Colin asked me to take the central Brigade and the Brigade of artillery and crack on. 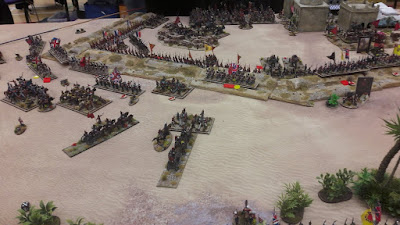 With a volley and a huzzah we were quickly over the ditch and hand to hand in the defences. 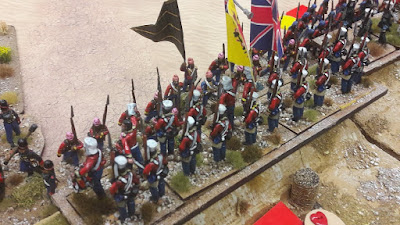 I had to wonder if I really wanted to break through though with a further battery behind the foot and a horde of irregular cavalry next to them. Still a problem for later, first to try and break in. 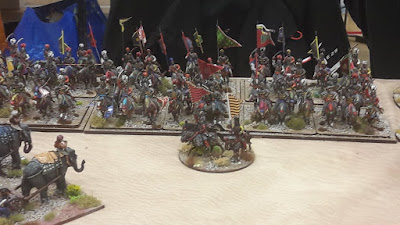 The earthwork around the village was fully manned at every point and the majority of the defenders were Sikh regulars. Historically these were European trained and probably the sternest test the British faced during their colonial wars in India. Ex Napoleonic officers commanded brigades in the years before the war, some troops even sporting tricolours. 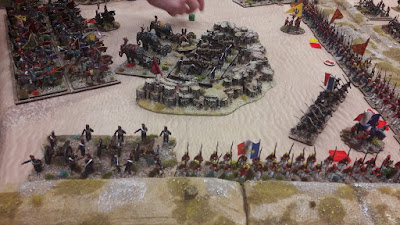 John to my left commanded two brigades of foot and one of our cavalry brigades, Colins Skinners horse were particularly nice but never actually got into action. 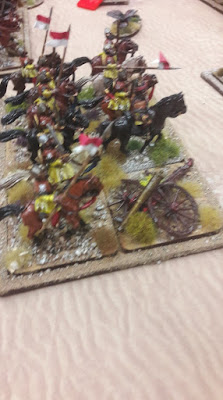 Whilst the British guns were in batteries of two, the monster Sikh guns were in threes to represent their historical superiority in metal. These guns were a lovely addition to the forces of the Sikhs and in retrospect it was not the cleverest idea to charge them frontally! 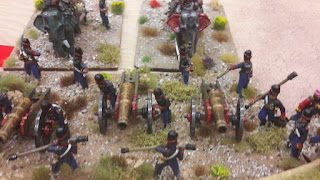 The equally beautiful Bengal Hose artillery were probably not quite as deadly on the day with their 6 pounder horse guns. 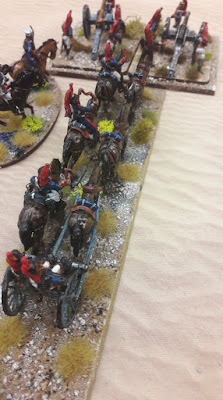 The first of my brigade bounces off the Sikhs, being in earthworks they are saving on anything but a one. 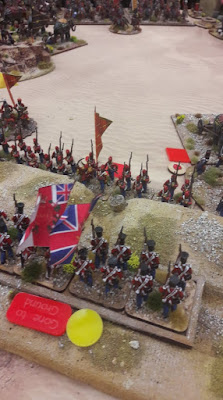 Those Gorchurra Feudal cavalry and milling about itching for a target to charge. 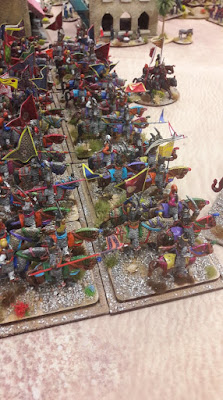 My horse artillery move up on both sides of my foot brigade and begin to bombard the Sikh foot, hoping to create a gap to charge through. On my left John is doing exactly the same hoping our combined firepower will crack the Sikhs. 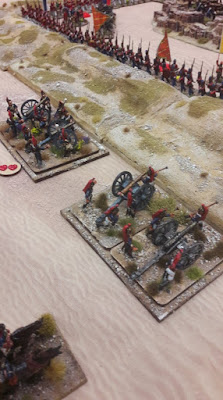 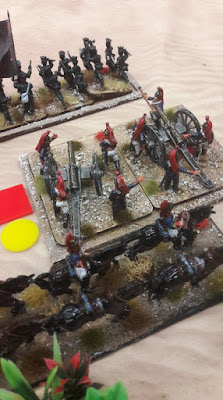 The return fire from these beautiful guns is a tad heavier and more casualties are inflicted on the British crews. 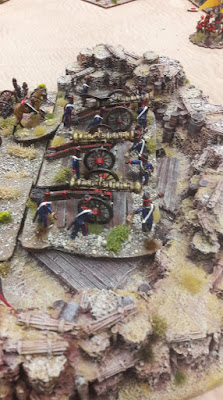 My unit facing the guns has been unsurprisingly broken by them, My British are locked in hand to hand combat for a good three rounds however the Sepoys on my right force the Sikhs to retire, which would be great if I didnt have to retire myself as the Brigade has taken too many casualties. Still we have a gap if only we can exploit it. 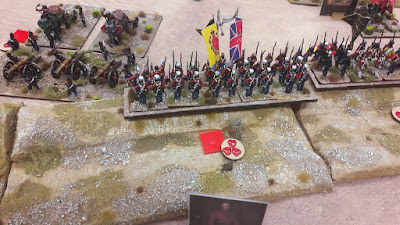 Skinners horse try to press forward but fail to get moving. 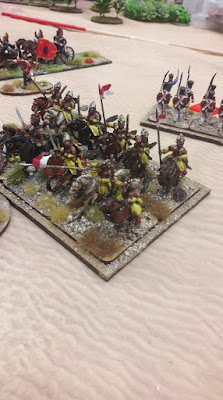 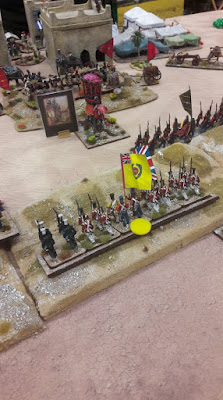 If things were not grim enough after 3 drawn rounds of melee the British battalion finally breaks and retires. On the up side our reserve brigade is moving up to try and take advantage of the mess we have just made in the centre of the Sikh line.

On our right Tim has broken into the extreme right flank of the earthworks with his cavalry and is moving forward against the rear of Pauls position and our massed artillery has put two more units of Sikhs to flight. Barry on my immediate right has broken into the Sikh camp with one battalion but lost another leaving him a little exposed. On my left John is slugging it out with Douglas's Sikhs but his Governor generals bodyguard have charged in and failed to clamber over the earthworks. 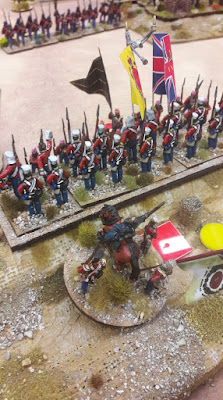 With everything to play for by both sides we need to start packing up as its 3pm and everyone else is leaving. 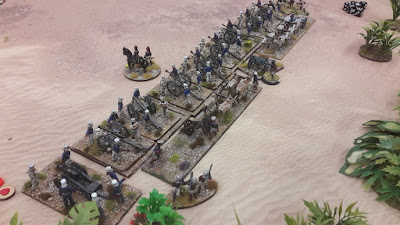 An absolute feast for the eyes and inspiring me to get cracked on with my own small collection. Colin had also organised for each of the players to receive a mug and calendar which were a brilliant thought, thank you so much Colin. 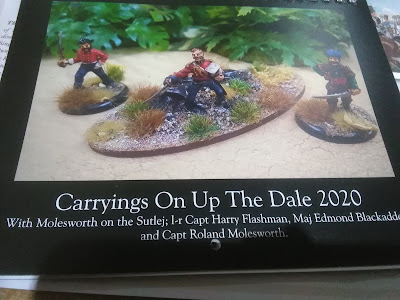 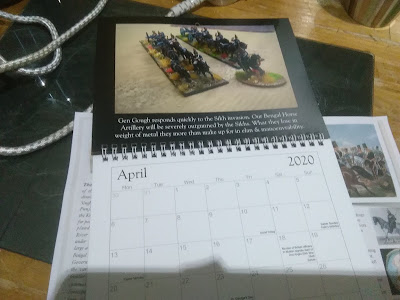 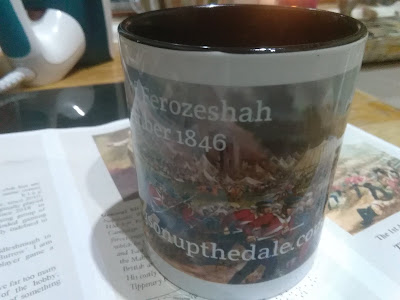 I am back at it now and working hard to get some Sepoys finished and give me enough for a respectable little game.  hope to have that on here in the not too distant future.
Posted by RogerC at 11:50