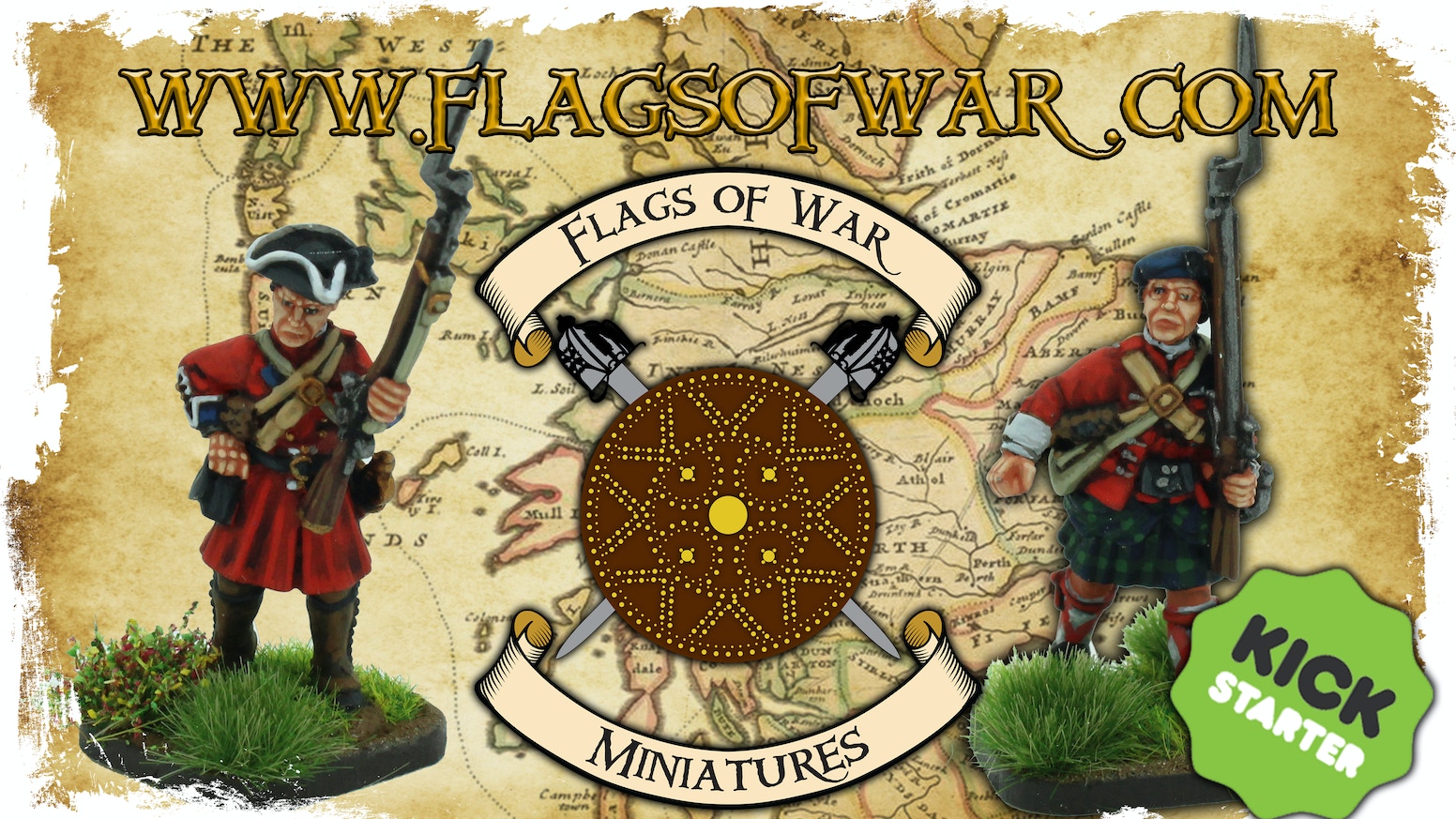 I have always had a fascination with "The 45" the romance and tragedy, the wild highlanders, the tartan!

We have been playing a lot of Sharp Practice lately and I felt that a lot of the smaller actions of the 45 lent themselves to these rules really well. As a bonus the British in their campaign dress will look perfect for French and Indian War British regulars which some of the guys by a happy coincidence are just starting to get into. So at least some of my troops will work for two different gaming periods.

Clearly for now the Govornment regulars will have to wait but I wanted to keep my interest, pick upa  few books, re-read soem others and make a very small start on the Jacobites which Flags of War have had available for a while.

I needed a flag for a unit I am building for the boyne campaign anyway so picked up 2 packs of the Jacobites along with a pack of spare heads for some ideas I had for some coversions.

Fantastic clean and dynamic figures with no flash at all, very impressed with them 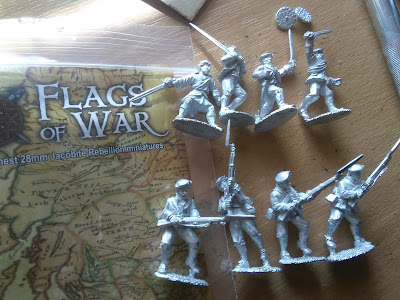 I went for one pack of Lowlanders and one pack of Characters. I will of course have Highlanders in tartan plaid but the Lowland troops offer much more versatility, I can use them for Loyalist militias and possibly even for Militia in the French and Indian War for future projects. 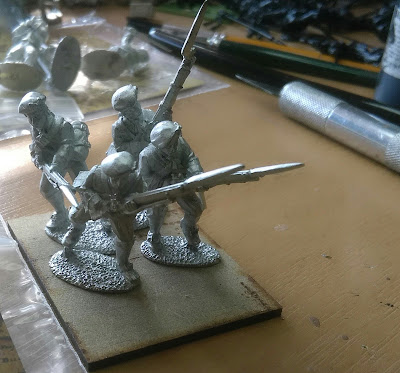 I am weighing up how best to base them. I usually multi base but single bases and movement trays will allow me to add or detract individuals to make different tyes of units from the same bunch of figures. A chap in civilian clothes but no cockade could be a Jacobite, a loyalist or an American Militiaman. Plenty of food for thought, the bases may need to be fairly big to accomadate the charging bayonets. 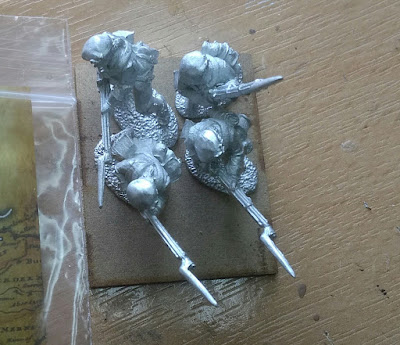 I may mix and match with some multi based and others not for maximum flaxibility. 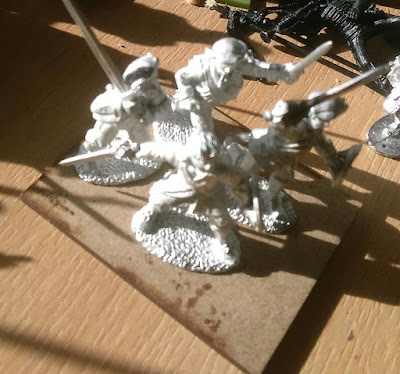 With the above in mind I also bought two packs of Galloping Major French and Indian Wars figures. The British Uniform will pass for the 45 and the American Militia can be used too. No reason not to mix in the odd tricorne. The penicuik drawings show Edinburgh regiment volunteers in tricorne as well as bonnet. 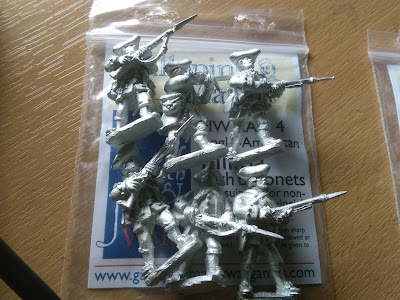 The militia are above and the British regulars below. Very nice characterful figures which will paint up really well. I had meant to get the Militia command but clearly pressed the wrong button! 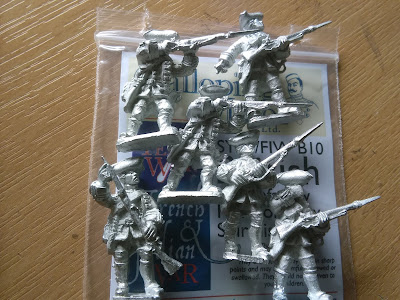 A size comparison below gives me some concerns, an Ebor WSS figure I plan to convert is left, the middle figure is a Flags of War highlander and the right hand figure is Galloping Major, much bigger. I can use these as seperate leader figures but wont be able to mix them in units. 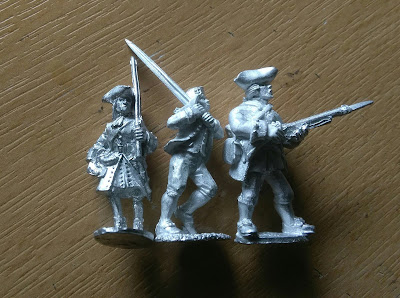 Being unable to contain myself here are the first four Jacobite Lowlanders. I like how they have come out. The bonnet is deliberately less bright blue than others I have seen, this shade feels more realistic. 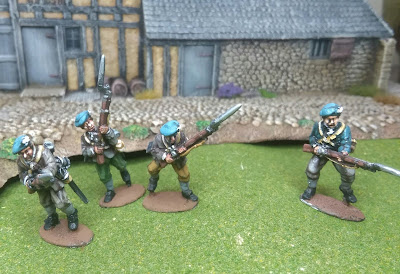 Below is the Ebor WSS figure, the original in the middle and two head swaps either side. I think these will look great as lowlanders and American militia. As a sidenote chum Chris Flowers is embarking on a  French and Indian War project so having a few figures I can throw in the mix will be useful. 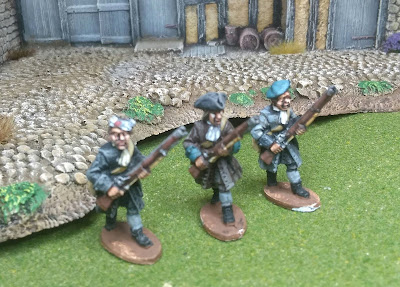 And then a pack of Highlanders, this is the character pack from Flags of War, now before you judge its been a while since I did tartan and I am still getting my eye in. I understand the recipe but need to get some trial figures done before cracking on, these have sort of come out OK the next batch should look a bit more like it. 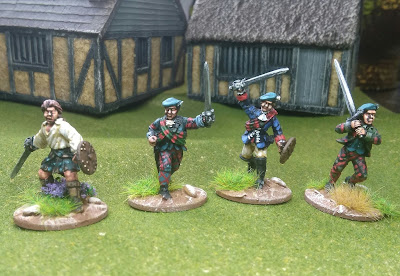 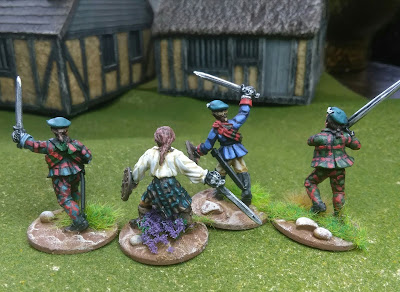 So there you have it, next years project, more updates as progress is made.
Posted by RogerC at 02:32