Yet Another AWI sharp Practice

So another Sharp Practice.We were keen to have a little larger game but also to see how playing with more skirmishers worked and how cavalry effected the game. 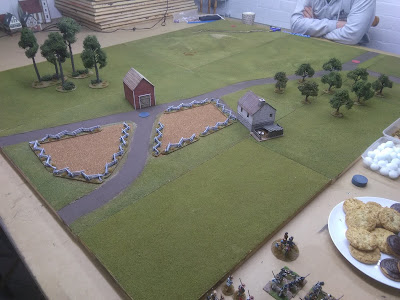 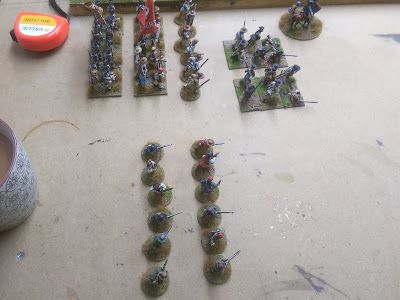 The Jaffa cakes did not last very long and cookies went even quicker. 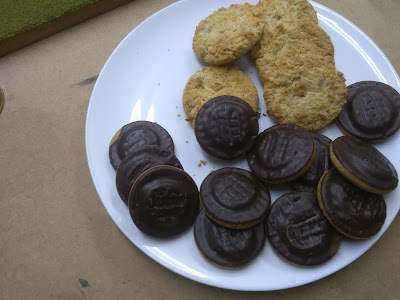 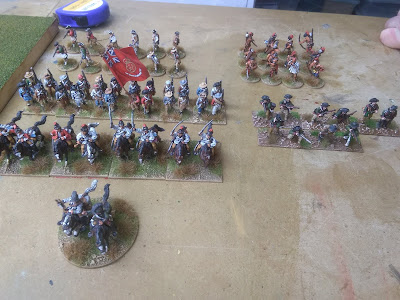 Marks forces would be: 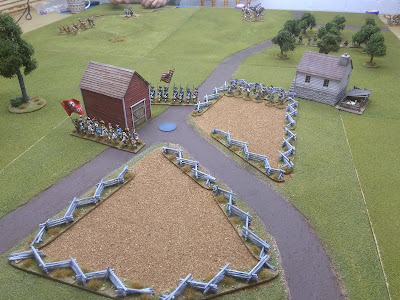 Deployment points were fairly close together and so we were likely to get to grips fairly quickly. The Tories had a movable deployment point to add some flexibility. 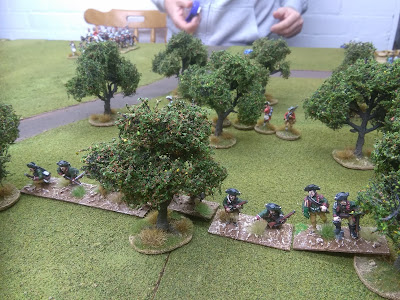 The Jaegers got forward very quickly indeed and were straight away at the edge of the wood in effective range. I tried to counter this by throwing my own skirmishers forward to the fence lines and the cottage, unfortunately I wasn't quite quick enough getting to the cabin. My Continentals pressed forward and the militia units covered their flank whilst more rifles pushed out onto the extreme flanks. 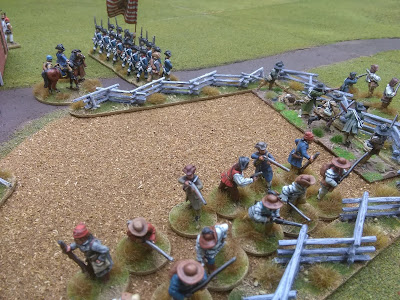 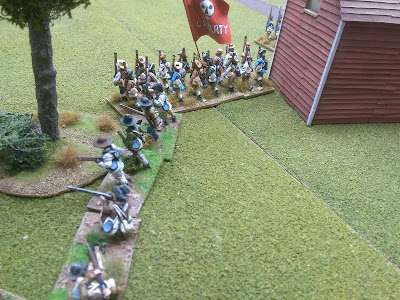 Mark used the move able deployment point to push his Indian Allies onto my left flank from behind a hill and soon followed these with cavalry before the Tiffin card came out. 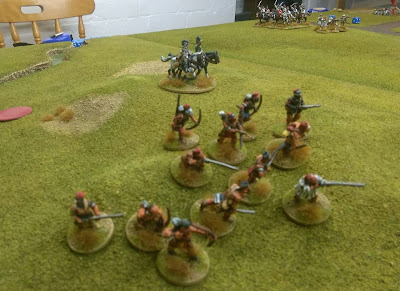 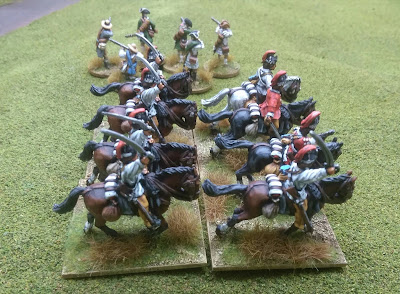 My rush to get the skirmishers into cover back fired though, caught in the open the Jaegers card came out first and they fired a withering volley into the militia skirmishers. 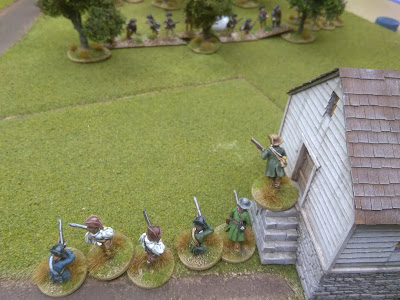 The Tory militia now arrived behind their Native American allies and I needed to start thinking about my left flank a bit differently. 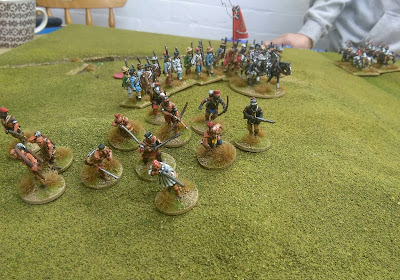 I finally got my skirmishers into the Cabin but not for long. 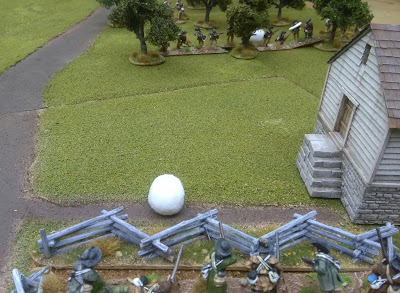 A second volley from the Jaegers decimated them and saw what was left of them running back out of the door. 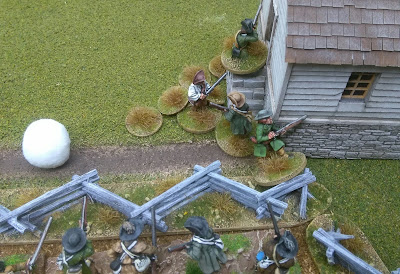 The militia skirmishers card now came out and the survivors legged it even further. 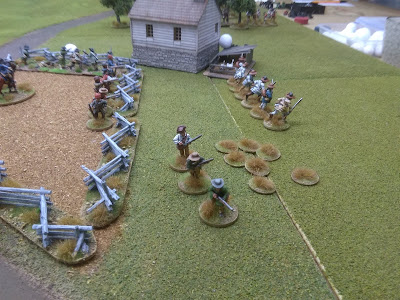 My own rifles returned fire and put a small number of casualties on the Jaegers, whilst my continentals vollied the Tory militia skirmishers and cut them in half. 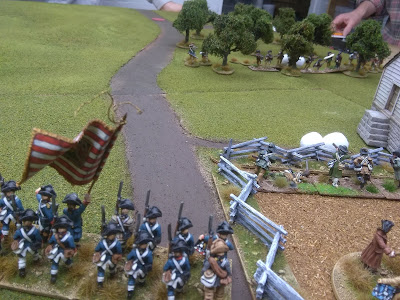 On my left a unit of rifles had got into the woods and driven the Inidans off with a well aimed volley. 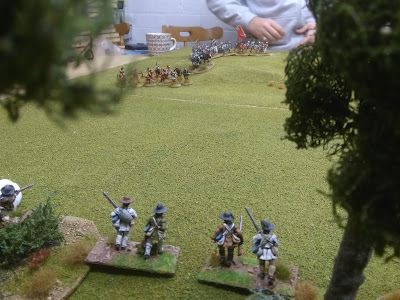 The rifles on my right also came into action against another militia skirmisher unit inflicting some damage. 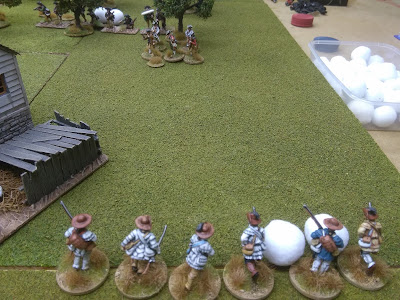 However the Tory militia coming off the hill gave me a dilemma, they were the great threat but if I turned my continentals to face them my flank would be to the Jaegers who would get double dice firing into my flank. 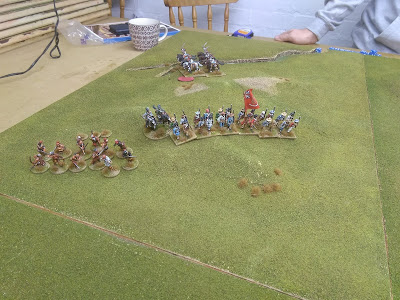 The gamble to stay facing the Jaegers did not pay off and the first volley caused a lot of damage. 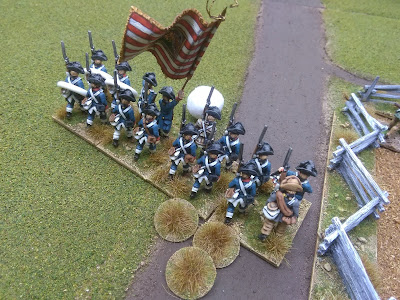 Things were still looking OK, my own militia was untouched and my rifles were good troops, if I could see off the Jeagers I could turn the continentals to face the new threat. 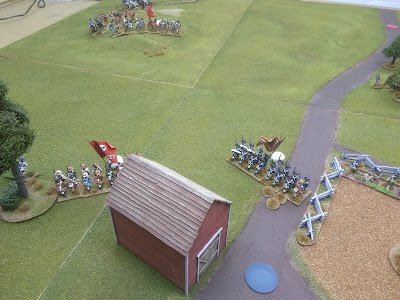 Unfortunately Marks militia card came out again and a second volley supported by Jaegers smashed my continentals and they were forced to retire. 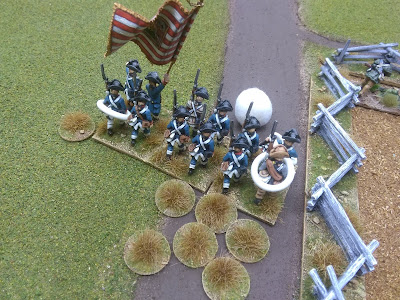 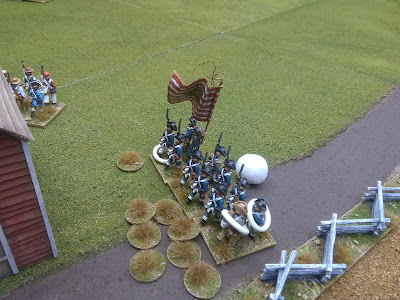 Things now went from bad to worse as the Cavalry hove into view, my rifle volley did no damage at all and the Militia were out of range. 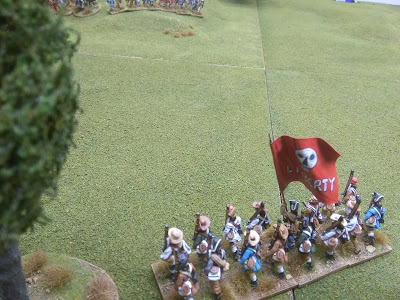 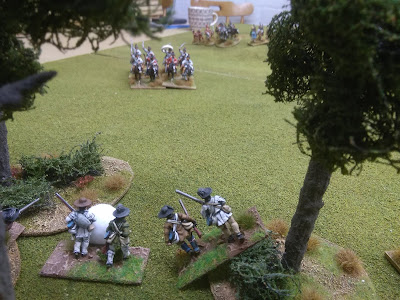 A special event saw the Tory militia skirmishers covered by smoke, obscuring both their view and mine and reducing the impact of both our firing. 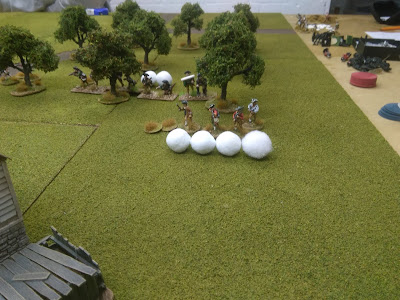 At this point the Cavalry card came out again and they got the movement dice they needed to charge home on the hapless militia. Unsurprisingly the Militia broke and fled leaving the cavalry poised on the flank of my badly damaged continentals and my few remaining skirmishers at the mercy of Marks now superior firepower. There was no coming back from this debacle now and I admitted defeat. 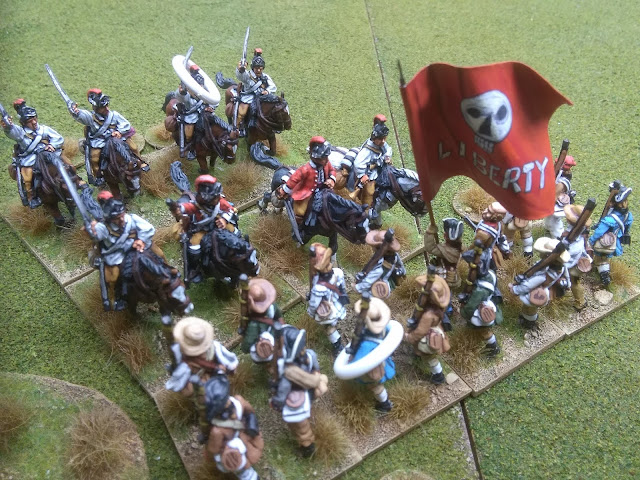