Back at Steves after a couple of weeks off and Steve got his AWI collection out for the first time for a  small Sharp Practice game.

The British had no British at all, a Loyalist militia of 3 groups of 8 in a formation, a militia skirmish group and a group of 8 Jaegers.

The Americans (surely both sides were mainly American?) Had also 3 groups of 8 militia a unit of 6 rifle skirmishers and another of militia skirmishers plus two groups 8 of state infantry in a formation. 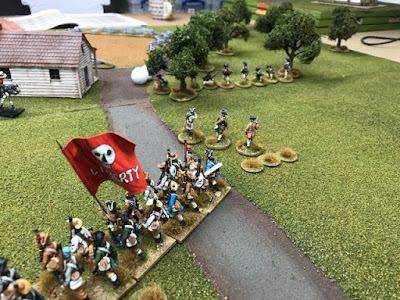 I forgot my ipad again so these are Marks pictures, as it happens they are great quality so that works anyway. 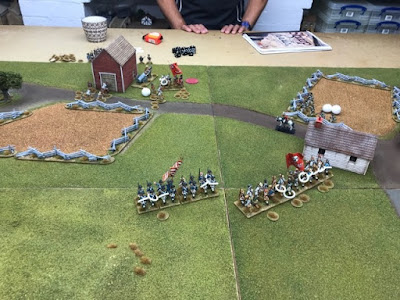 The Patriots/Rebels (delete as appropriate) having an extra 2 units of troops but the Loyalists having the quality of the Jaegers. 38 Loyalists against 52 Patriots.

The objective (revealed slightly late!) was a barn full of stores the Rebels needed to get their hands on. 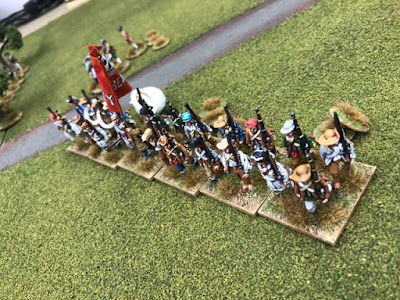 The action opened with units deploying from their markers near the centre of their respective sides of the table. Unfortunately for me the only unit not to get on before tiffin was my best troops, the Jaegers.

Move two and the Rebels go first bringing them into long range for my Militias muskets, a controlled volley and the State troops have their first shock markers. My skirmishers try to get around the flank of the Militia formation and in response Marks riflemen set off towards his left flank behind a hill, slightly bemused by that I opt to ignore them for the moment.

At last my Jaegers are drawn and I push them through a field towrads the wood on my left flank where they will eventiually be able to enfillade the Patriot lines.

The next round sees a series of long range volleys with minimal casualties for both sides, Marks riflemen continue to move right out onto my extreme flank and I move my skirmishers behindthe militia line to shadow the rifles, my Jeagers are now almost at the edge of the wood but Mark has thrown his own skirmish line across the ends of his formations to screen them from my fire. 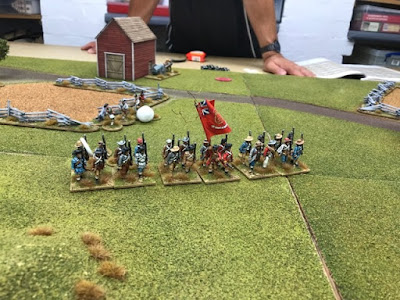 As we press on the Patriot militia advance to fire at effective range, followed by the State line and then with 4 flag cars in a row Marks 24 militia get to fire again, 40 shots at effective rnage in the spcae a few minutes!

My militia stand the punishment remarkably well but the tide begins to turn as I have a lot less to fire back now. My Jeagers open up on the skirmish line, two consectutive shots inflicting heavy casualties and focing them back but now the achilles heel of the rifle comes in as it takes a full turn to re-load and I am unable to support the beleagured militia. Marks commander focuses his command points and  is able to remove the majority of the  shock from the State troops who continue to poor fire onto my now dis-integrating milita.

My skirmishers start a one side firefight with the rifles who are now heading down a lane leading to the rear of my forces and, yes you guessed it, the supply dump in the barn. 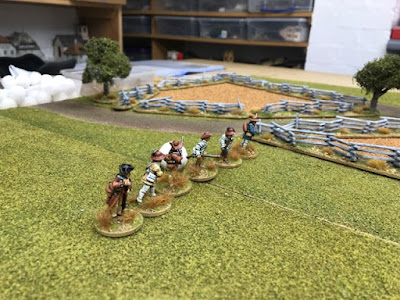 My Jaegers are now re-loaded but dont hav a target as the Rebels have moved on and are masked by a farm building. My militia must retire as they have more shock than figures remaining and the three groups have all become seperated. The Rifles have almost reached the barn but so have my militia skirmishers. 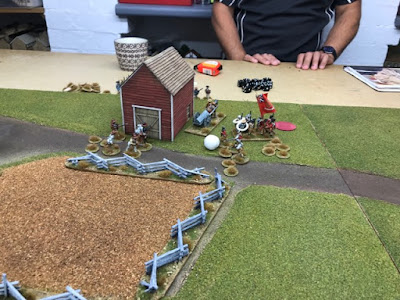 A good volley are the rifles are foced back from the barn door, my Jaegers have now pulled back to line the fences between my militia and Marks Militia, however my militia are almost annhialated and in a race towards the base line. My five remaining militia skirmishers wont be able to beat Marks 5 remaining rifles in a protracted fire fight and my one group of Jaegers has little chance against 5 groups of Rebels no matter how good they are. 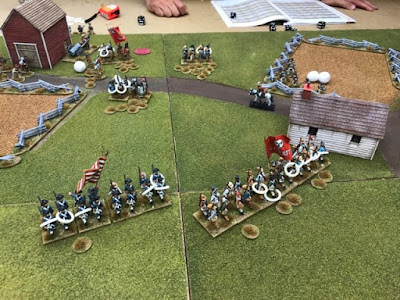 I admit defeat at this stage, the rules have worked really well and handled the different troops types well too. Interesting to see the tactical issues of the day manifested in our game. My one chance as Steve later pointed out was to charge his milita skirmishers with my Jeagers and then fire into the rear of the formations with double shock. To be honest that felt like asking a bit much of skirmishing troops at the time but in hindsight was probably a missed opportunity.

Great fun game looking forward to another very soon.
Posted by RogerC at 14:04