I had a day off today and went over to Chris Flowers for a game of El Cid using the Hail Caesar rules. Jerry Miller kindly organised and umpired the game so I got to play with the collection for the first time!

The game would be heavily influenced by the film and about half of the players were either El Cid first timers or Hail Caesar first timers.

I was given command of the Moors with Malcolm and Mike on my flanks whilst opposite me Richard, Chris and Brian would command the Spanish Christian forces.

At one end of the table were the walls of Valencia and at the other a monastery, clearly the Cids first task would be to rescue Sofia Lauren from the Monastery and then it was just a question in my mind of when the Christian Knights would debauch from the City and if Alphonso would arrive with further reinforcements. I wasn't a million miles away from the truth as it goes.

A level of minor confusion was added by the presence of at least 8 El Cid model figures on the table, only one of them of course being used as the man himself. 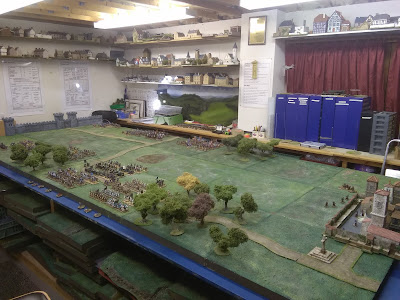 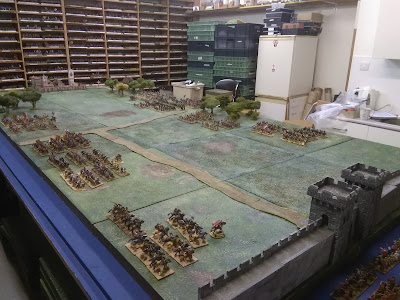 It was to  be a large game, I have a fair number of troops, but Jerry's megalomania has really kicked in with this collection and the volume of quality troops he has got to the table in only a few months is quite astonishing.

As it happens we only used about 3 quarters of our combined forces for the game.

The Christian Forces were as follows.

Alphonso's Royal Knights x 4 may or may not turn up (Of course they did!)

Each section of the army had its own commander with a rating of 8. 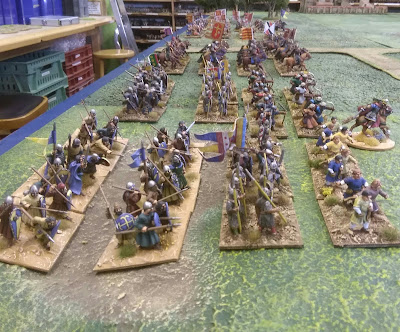 The Moorish Forces were:

Three commands all rated at 8. 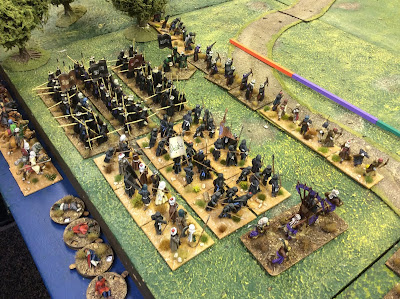 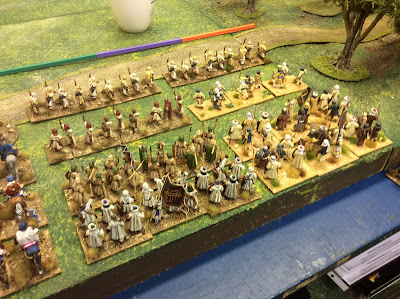 All of the skirmishers for both sides had the MARAUDERS rule allowing no deductions for being outside command radius.

The Knights had the LANCE special rule, reducing saving throws of the enemy by one, the horse archers had PARTHIAN SHOT allowing a closing shot before they evade. Berber and Black Guard foot had LONG SPEARS negating enemies charge bonus and making them a little tougher. Odd units also had STUBBORN or TOUGH FIGHTERS, but as predicted before we started we all forgot to use these last ones.

Overall the forces were balanced. The Moors had one extra unit and slightly more missile troops, this was more than balanced by the quality of the Christian forces, particularly the Knights.

The first moves did not bode well for the Moors, we had decided to engage the Christians as quickly as we could suspecting that reinforcements were pending. Unfortunately the foot had other ideas, both Malcolm and  Mike's foot divisions failed to move at all and my Black Guard only managed a single march. This was made slightly less frustrating as the Christians had their own issues getting their foot moving forward. 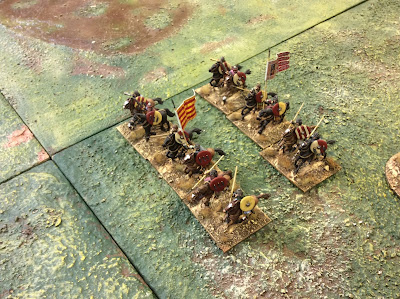 The next two moves Malcolm blundered with the same unit and in both cases got a headlong advance meaning he had 2 units of foot charging off ahead of his cavalry, the rest bumbled along sedately whilst Mikes Berbers refused to move at all for a further two moves. My Black guard continued a steady advance in the middle with the horse archers scoring first blood in the game with some long range archery at Brians leading Knights. 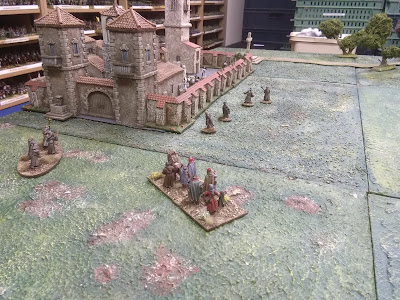 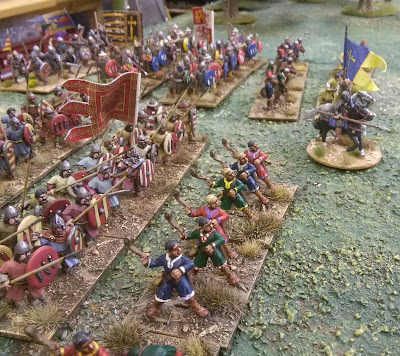 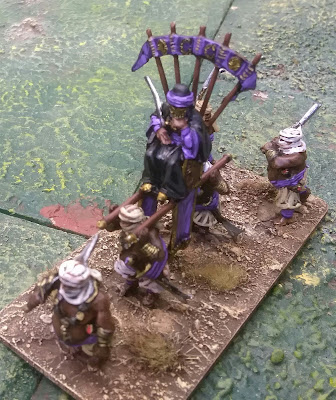 I must just mention the above model, the photo does not do it justice, this is a conversion of a Warhammer unit that Jerry put together as Ben Yusuf himself with his slave guards. Very nice! 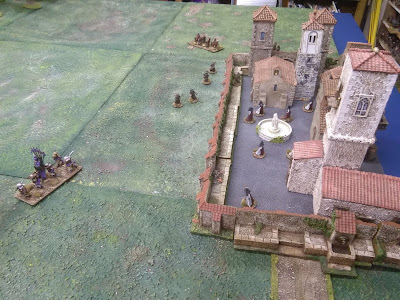 As the forces closed on each other El Cid had ridden to the Monastery, rescued Sofia Lauren and belted back to take command of his forces. No issues with command roles there!
The first melee of the game came as El Cids bodyguard were released by his return to the army and charged Mikes light cavalry. A balanced fight with each commander winning one melee and losing the other. Unfortunately for Brian, Mike had three more units in support and was able to feed them in once the moved passed to the Muslim turn and see the Christians off. One unit broken each and one unit of Christian light horse retiring at full speed behind the heavy Knights. 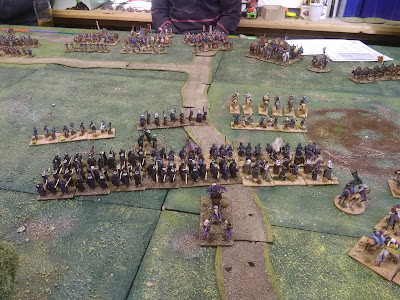 The Black Guard now occupied the centre of the table with their right flank anchored on an impassable marsh and skirmishers thrown out and causing some pain and frustration to Brians Christian Cavalry.

However at the same time King Alphonso turned p as predicted with a further force of 4 units of armoured Knights.

Mikes great block of Berber foot was still sat on the base line practically but his cavalry had now driven back Brians light cavalry and was harassing the supporting Knights.

I had pulled by my light cavalry back to fill the gap that was starting to open up on my left as Malcolms foot charged forward after their blunders and his cavalry engaged with the Christian hordes now pouring out of Valencia. 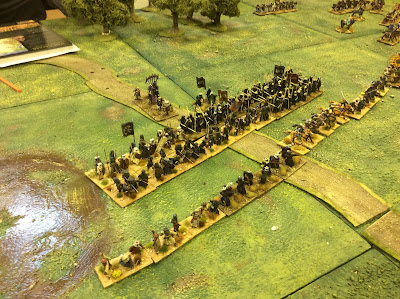 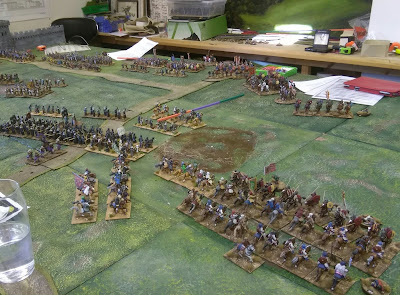 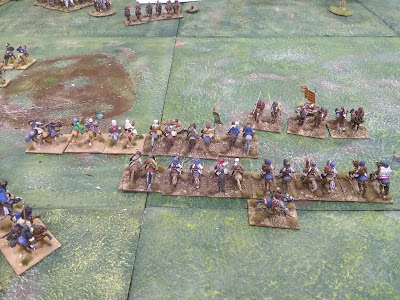 Alphonsos newly arrived Knights charged Malcolms exposed Andalusian foot and forced them back whilst Brians Knights charged the Black guard with slightly less positive results. Brians Knights retired after losing and inflicting about equal numbers of casualties. In my go my archers went back forward to harass Brians men only to have him charge me again and force half of the Black Guard back one move. 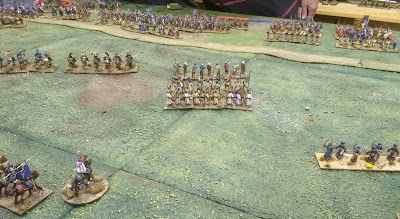 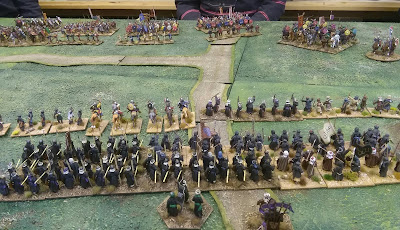 Mikes Berbers finally got going and made tree moves all at once followed by another 3 from memory whilst the cavalry melee under the Walls of Valencia started to drag units from both sides in as reinforcements and Malcolms forces were gradually pushed back. 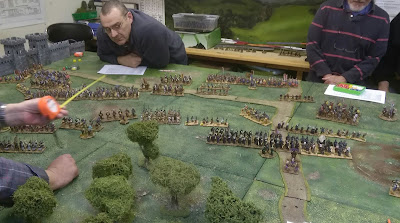 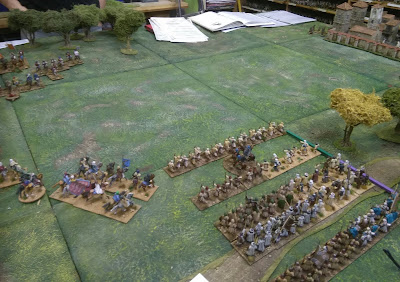 As we called a halt to proceedings it was again clear that the game had a long way to go. The Christian right under Richard and Chris was pushing Malcolm back giving his Andalusians a mauling, meanwhile on the other flank two great blocks of untouched Berber foot faced Brians also untouched infantry and were gradually turning the Christian flanks so eventually a battle set up to play across the length of the table would entirely swing into a game across the width with the Christians under the walls of Valencia.

The Christians were doing marginally better but there was a huge amount left to play for. The Christians claimed victory but we were not so sure.

A cracking game with the three who had not played before being converted I think.

Thanks for reading and please return for our next thrilling instalment.
Posted by RogerC at 07:53