More cake and Another BLB3 Playtest

Back to Steves tonight for another bash at Great Northern War using BLB3 The War of The Three Kings. This time we had more troops, more players, deeper table and had decided to double all distances to speed things up. Oh and more cake of course!

Chris had kindly printed off the quick reference sheets and a stack of order markers, cheers Chris. 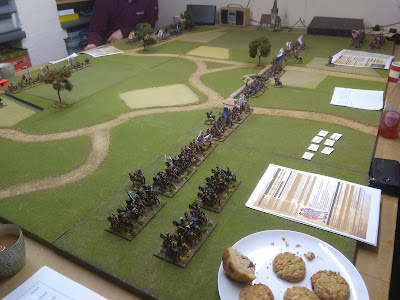 A fairly similar scenario to last time, I did however mess with the stats a bit to see how big a difference some things might make to the robustness of certain units, or not.

As it turns out this all may have been a bit too ambitious, none of us are familiar with the rules, last week with two players it was easy enough for me to check things in the rules whilst Chris and Steve played, with 4 players I simply couldnt keep up with the list of questions and queries.

Ah well you live and learn. 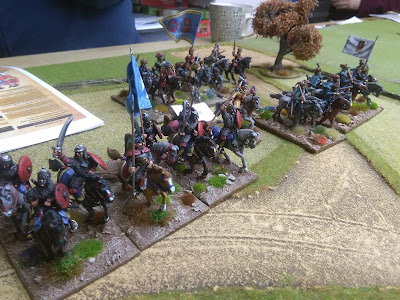 In terms of forces and stats they were as follows. 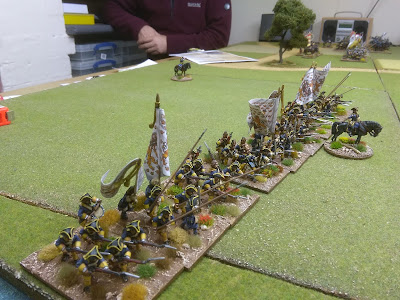 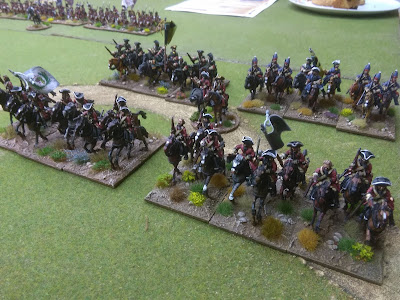 I gave the Saxons a brigade of drilled Elite to represent their Guard being a bit tougher to break. We also gave them an extra two foot and two horse units from last time and upped the gun from light to field.

The Swedes had one extra unit of Horse, the Guards Brigade were given the bonus of Elite to also make them more robust. 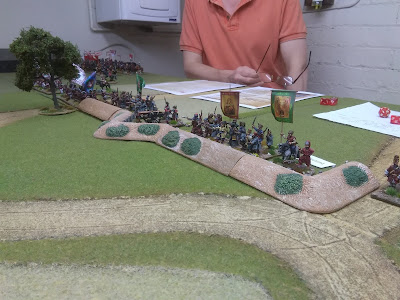 We added in blanks for every unit that would not get an order, we must have missed this in the rules, No surprise I have probably missed loads.

So with a little more Parity between armies we were ready to begin. 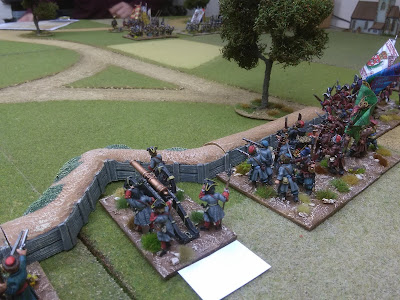 The Swedes advanced steadily although the Poles on both sides held back hoping to avoid a drubbing from the opposing regular cavalry. Andys Saxo-Russian Horse moved briskly forward to try and engage the Swedish Poles. A shot from the Cannon missed and we were onto move 2. 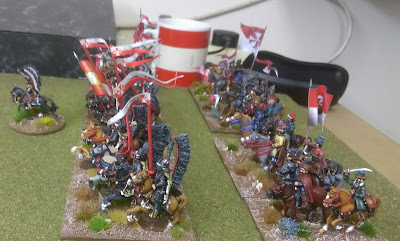 The Saxon Poles above had two units of Winged hussars which I gave drilled to reflect their better quality, the Swedish Guard cavalry below also got Elite to their Veteran status whilst the foot brigade pictured here included 2 units of drilled to reflect the use of Tremanning regiments, although Idid give them elite to stop them breakign too quickly.

The cake and biscuits didnt last long enough for me to get a decent picture, one move in this was all that was left! 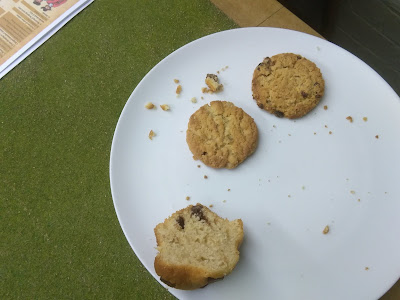 Being obvious that the Saxons would charge his Poles Chris gave his orders to charge at the same time as Andy so our first clash was on. Although Andys Drilled troops had a higher dice type, as Bullet they only hit with a 6 where Chris's raw blade hit with a 5. One Melee was won by the Poles who broke the Saxons opposite and then followed through onot te stationary Russians behind, on the other side the Saxons drew with the Poles and were reinforced upon which the Poles were routed. One all! 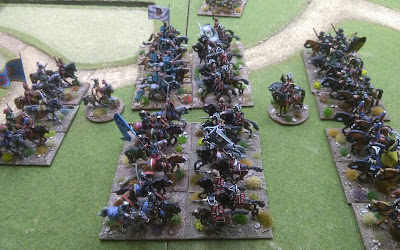 Elsewhere everyone continued to steadily close. 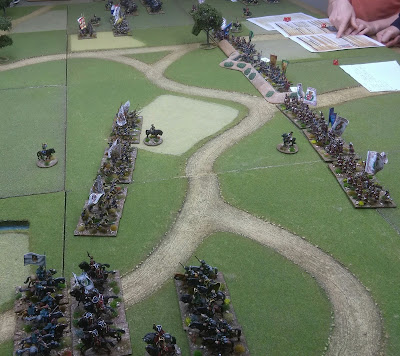 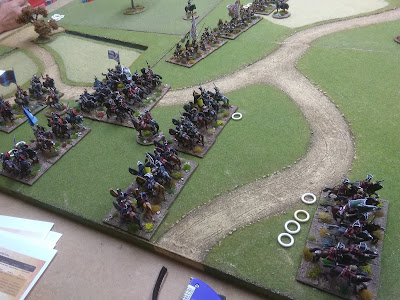 Musketry and artillery began to take its toll on the advancing Swedes, however the morale rules are veyr robust and the Swedes ploughed on. 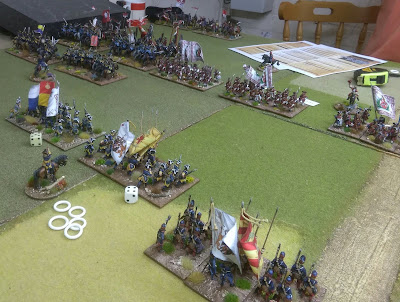 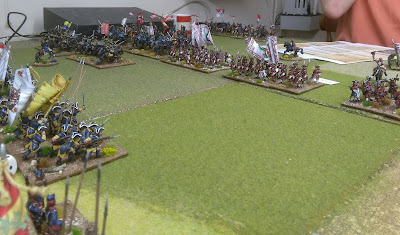 The raw Cossack foot were firing to little effect as hits had to be re-rolled due to them being raw. 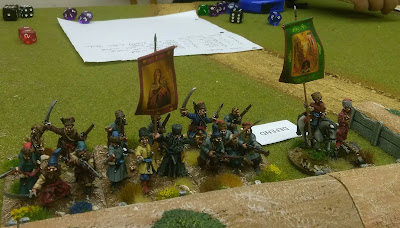 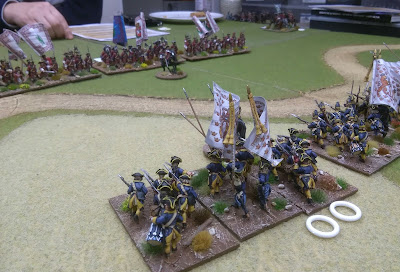 The reserve Polish cavalry now charged what remained of Saxon Cavalry with unsurprisng results before bouncing onto the Russians in support. 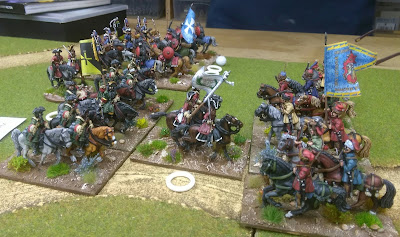 On the other side the Swedish horse were now in contact with the Saxon Poles. A dwiring multi round melee followednwith honours about even. 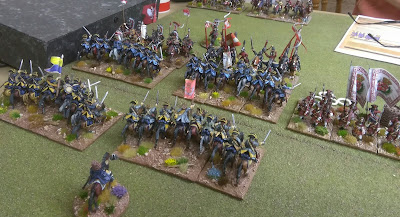 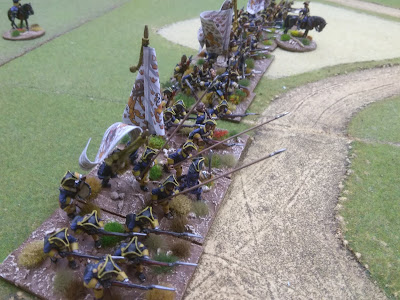 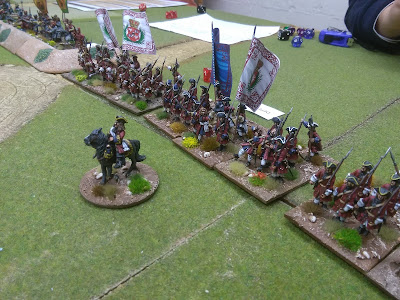 The guards brigade now charged the Saxons, with double the range this meant 14 inches of charge. The Saxons blasted away causing multiple casualties but the Swedes closed non the less. Another fierce multi unit melee ensued. 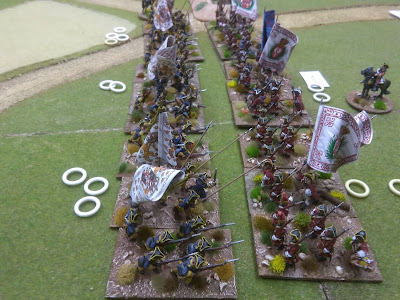 It took three rounds of melee for us to be left with one Saxon battalion beating the Guard Grenadiers but left with less than half stregnth and the remaining two Swedish units triumphant but again down to half stregnth.

On the opposite flank both sides reinforced the melees and the Polish casualty figures int he back ground perhaps tell their own story. 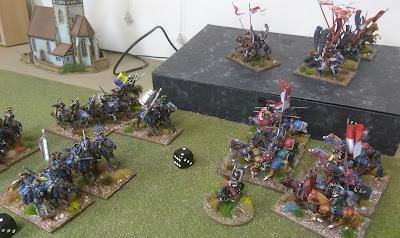 There was plenty left to play for, each side had a full brigade of regulars un-commted, but it was geting late and I was struggling to keep up.

So thoughts from tonights game:

1. I still like the rules and want to introduce more Great Northern War specific stuff which I am talking to Barry Hilton about. sorry no spoilers though.
2. Doubling movement before we had throughly play tested was a really bad idea. I think we will need to increase movement eventually but not by double.
3. I need to digest more of the rules and have a couple of the other guys read and play them before tackling multi player games.
4, The morale seemed a little too robust but I have learned my lesson about snap decisions and will stick with them for a few more games.
5, Most players remain convinced that we can use these rules for the period and enjoy them.
6. I need to play the game not just umpire or I wont learn the rules, I learn by doing not reading.
7. We need to stick to smaller games until the rules are second nature.
8. The more I play this period the more I love it.

Next week might be a week off Great Northern War as a bolt action game is planned at the local East Leeds club. I do intend more games and will keep you posted on how these develop.

Thanks for bearing with my ramblings. More to follow.
Posted by RogerC at 12:13