So full disclosure, having spent about 3 hours putting the first version of this post together with about 30 or so nice photos I somehow managed to delete the lot and cant get them back. Aaaagggghhh!!!

Thanks to chum Chris Charlton I do have a few of his pictures to share for what was a great fun game.

When looking at the scenario I wanted to try something that captured the flavour of the period. There were some key characteristics of the Civil War in Russia. The vast distances involved meant that railways were the best way to move troops around, rivers were natural barriers and used for defences and wide flanking moves by cavalry were a common tactic.

With all this in mind our game was to involve a White regiment defending a railway bridge over a river. 3 regiments of Bolsheviks were arrayed against it supported by a large regiment of cavalry and supporting arms.

Meanwhile another regiment of white foot and a large force of Cossacks had crossed the river up stream and outflanked the reds hoping to to trap and destroy them against the river. 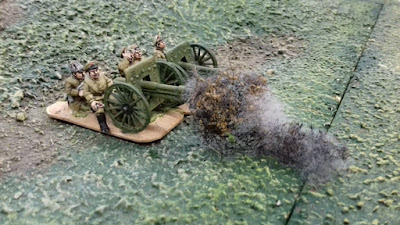 The forces involved were as folows. 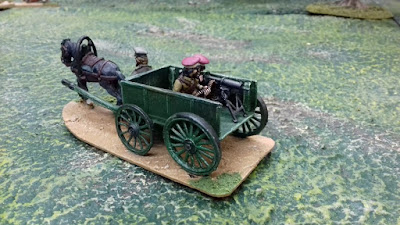 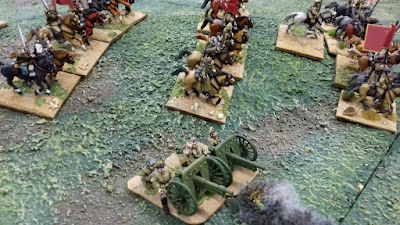 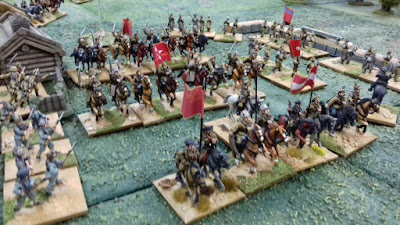 I had envisaged that the Assault regiment, supported by the first Militia regiment would storm the bridge and stand a reasonable chance of taking it. The second regiment of Militia would hold their flank against the advancing regular white foot whilst the Red cavalry would take on the White cavalry and we would have 3 balanced fights.

Needless to say what actually happened was nothing at all like that. I really miust be clearer with objectives. 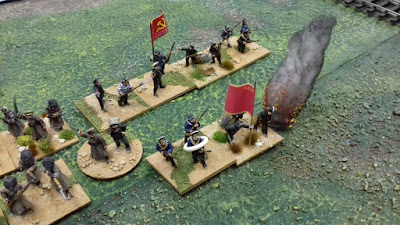 The assault regiemnt started well advancing towards the bridge to take on the garisson and takign the odd casualty from the artillery. The red artillery supporting their advance with suppresing fire on the white MG.

The Militia however decide that discretion is the bettwe part of valour and dig in around the village, whilst the red cavalry peel 2 sotnias off supported by the armoured car to face the 6 Cossack sotnias and send the other 4 forward to support the assault on the bridge. 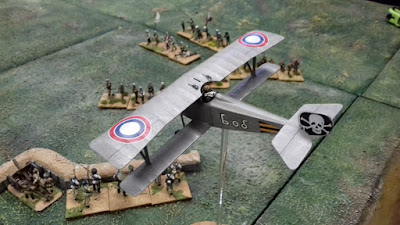 The white response is for the flanking foot to start to march towards the bridge to reinforce the defenders whilts the Cossacks line up for a one sided battle with the red cavalry. 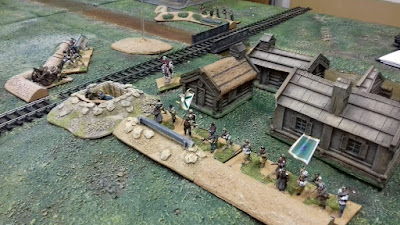 As the assault regiment closes on the bridge John throws his first Sotnia of red cavalry at the Cossack regiment, at this stage he gets a lucky break and roles a six for airsupport. The Sopwith Camel dives onto a Sotnia of Kuban cossacks and inflicts 4 casualties which also supresses the unit for a full turn. However with the bonus of aggressive and supported by other units the white cossacks drive off the badly mauled reds.

A second move sees the the red followed up and destroyed, John throws his last unit of cavalry in and this also is driven off. His armoured car inflicts some casualties but is ultimately swamped by two Sotnias of Asiatic cossacks. 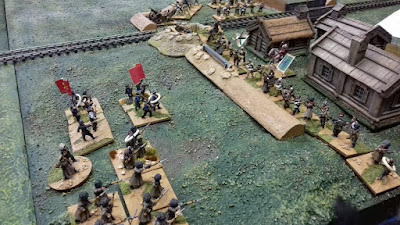 The red assault regiments have now however closed with the bridge defenders. The naval infantry at the front inflicts heavy casualties on the defenders but is driven back in disarray,the following move and the remaining assault troops close ont eh defenders. The front three units of whites are defeated but there are virtually no reds left and certainly no fresh troops to exploit this sucess. Richard has brought a unit from the other side of the bridge which is ensconced in the village and 4 more units of whites are closing on whats left of the assault troops. 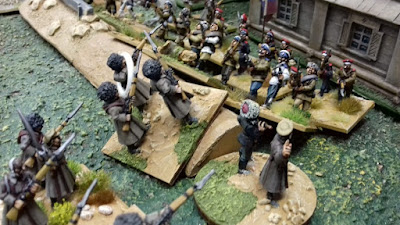 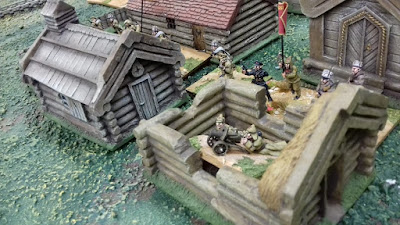 The red cavalry in the mean time have crossed onto the flood plain next to the river ready to support the badly battered assault regiment. At this stage the White airplane arrives and creates havoc with the first Sotnia of reds, as they advance across the plain the second unit is decimated by machine gun and artillery fire and John decides to save what troops he can from the attack.

As the cavalry ride back through the militia in the village I reminded of the scene in the fiilm Zulu. You know the one where the British defenders cheer the arrival of colonial cavalry which then rides straight past them. The poor old militia sit in their trenches and watch the red cavalry retreat off table leaving them to their fate. 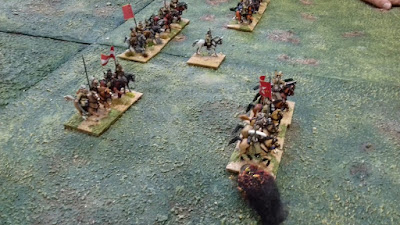 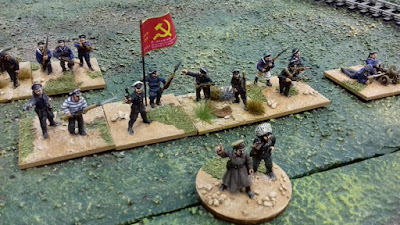 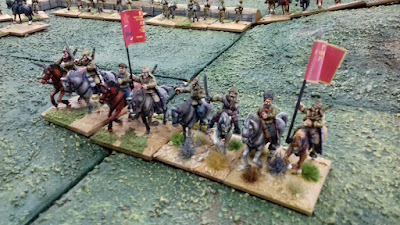 The Cossacks meanwhile have cleared all in front of them but have 2 Sotnias hors de combat. They now charge a stray Militia unit outside the Village which should be a simple victory to them, lots of poor dice later the slightly damaged militia retreat leaving the Cossack Sotnia under the guns of the rest of the regiment in the village. Oh dear! 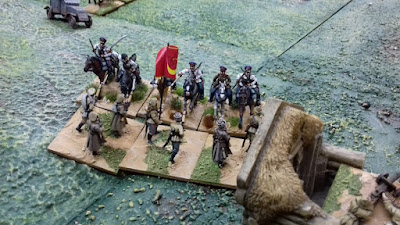 But this is a phyric victory, the Militia company is finished off and the Cossacks close the trap around the two Militia units. Reinforcements in the shape of Caucasian cossacks and an FT17 arrive and clatter over the railway bridge and the the two regiments of white infantry prepare to march forward out of their trenches. The militia re lookign at each other wondering when the next train will be along to pull them out. Fat chance comrade! 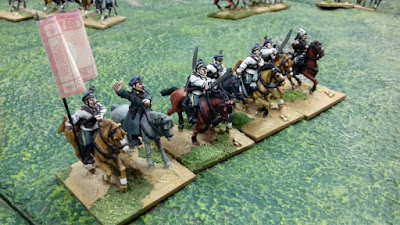 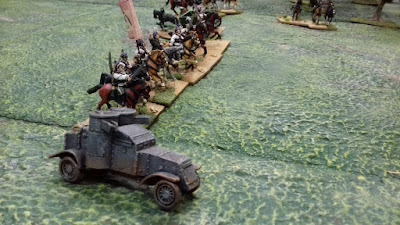 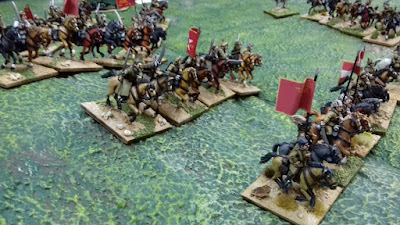 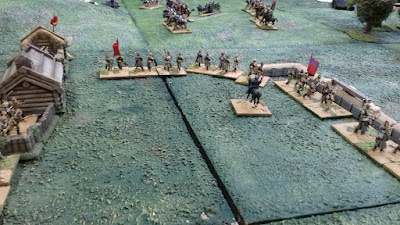 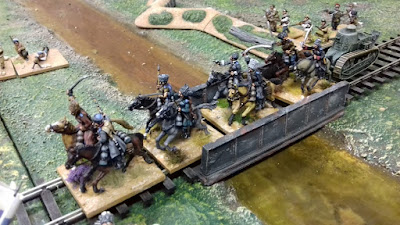 So despite doing entirely differently to expected a fun game for all players. It cemented the rules a bit more in my head and I do like them. Keen for another go in the near future.

The Caucasian Cossacks and the FT17 are newly painted so more of those in another post.

Apologies again for lossing all of my wonderful phtos of this game but Chris's pictures are still nice, cheers Chris.