OK so I have made a little progress for Tyrone's Rebellion.

First of all I have received the first batch of the Claymore Castings Irish and Islemen figures.Ordered and delivered within 24 hours, almost as impressed with the service as I am with the quality of the figures.Whilst pitched at a much earlier period, as much as 200 years. Many of the troops are ideal despite having earlier helmets, the rest of the gear was practically unchanged. 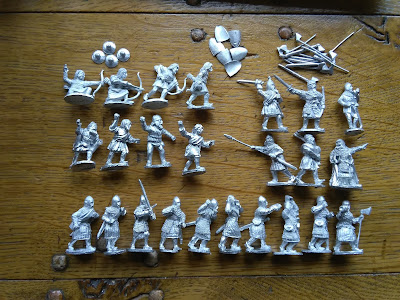 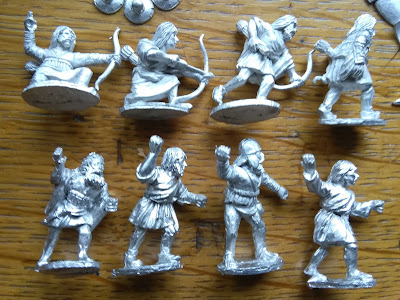 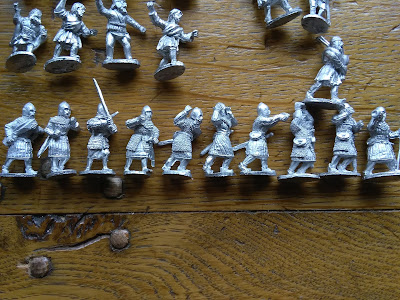 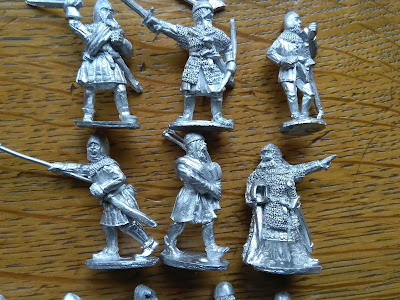 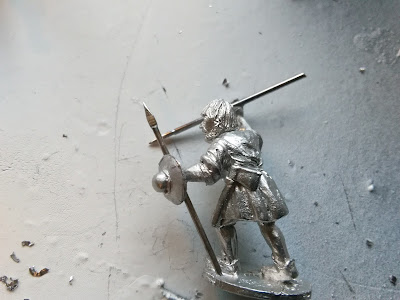 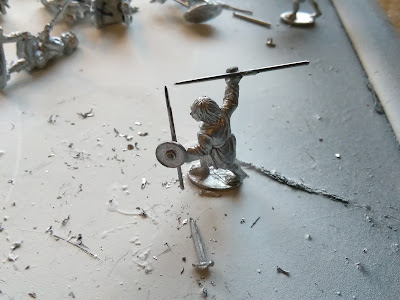 One or two figures I decided to tweak the weapons to ensure they had double handed axes. Reasonably happy with how these came out. 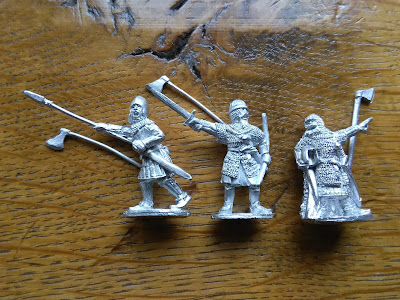 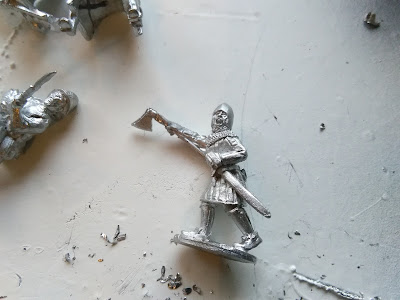 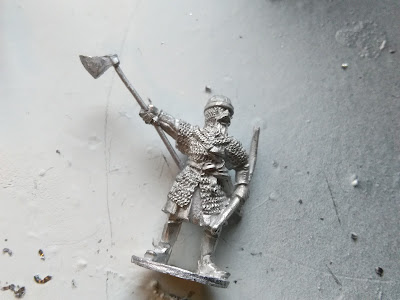 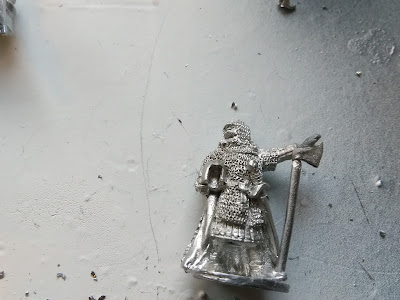 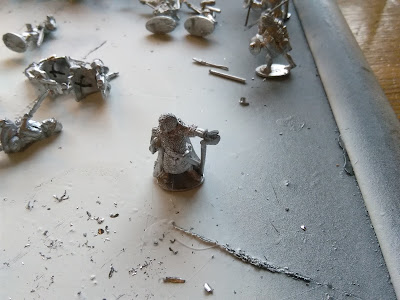 I was also at the Leeds Wargames show Fiasco and picked up a number of the now Hoka Hey figures ex Graven Images by Jim Bowen. The Garrison Troops are ideal for the British regulars and most of the Irish also have loads of character. I picked up a pack each of Garrison Caliver men, Garrison armoured Pike, Kern with arquebus and Gallowglass attacking. 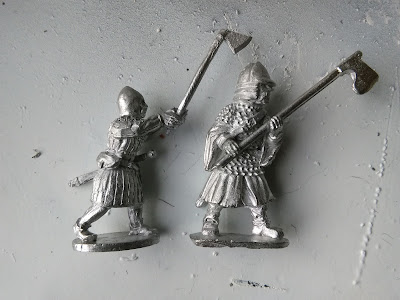 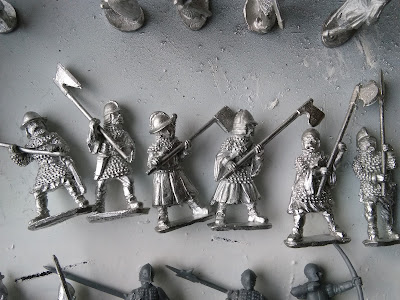 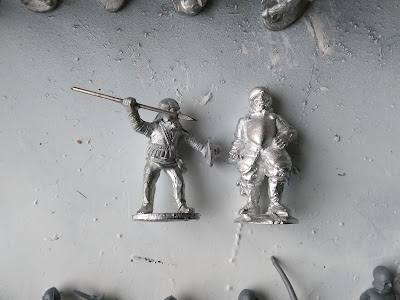 But that does give me about 50 figures to get stuck into.

Two flag sheets arrived today as well, one each for Irish and English. These do look quite nice.

Meanwhile I have got stuck into the two remaining Border Reivers, both mounted and dismounted figures. 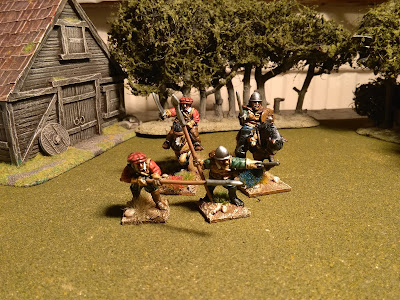 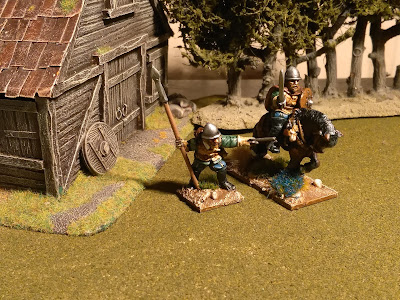 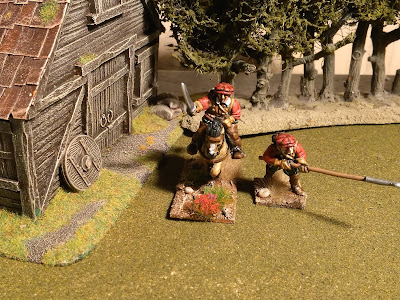 Both figures have come out OK. These are lovely figures, unfortunately there is not much variety in the horses so I usually add some from other ranges mainly the Redoubt Enterprises figures, the size is pretty compatible.

Apologies the pictures are not great, putting the clocks back means no natural daylight until the weekend! 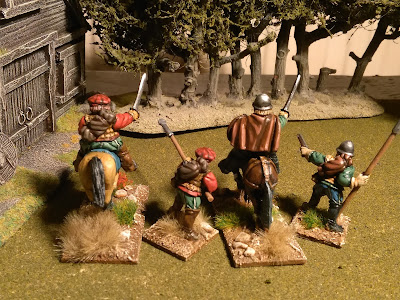 I do still have a few Redoubt Enterprises Irish and the Hundred Years War Irish skirmisher pack from Crusader also on the way. So that should take me to 65 or so figures to paint up and add in. I will be adding in Kern javelin men and arquibusier and some more Garrison troops, both Caliver and Pikemen plus longbow men. 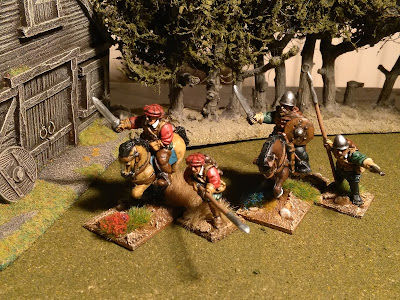 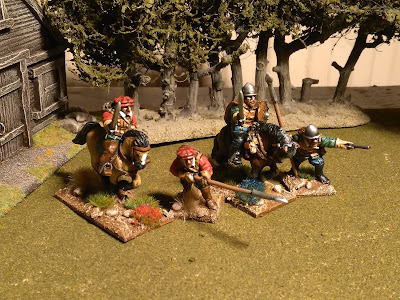 I have also joined the Pikemans Lament facebook site, this rule set currently seems a good match for the Elizabethan war against the Irish Rebels of the Earl of Tyrone. I had quite a few well natured responses to my first post on there and found two members gaming Elizabethan. The first Colin is focused on English fighting alongside Dutch against the Spanish but might help me build my English force, his blog is here http://theleadpile.blogspot.co.uk/2017/10/dutch-revolting.html . The second is David who is actually doing the same Irish project for Pikemans Lament and is slightly ahead of me with progress. He has a great post on the subject here https://ilivewithcats.blogspot.co.uk/2017/08/the-irish-project-tionscadal-na-heireann.html we may be comparing notes but a trip over the the states is not really on the cards for a joint game!

Hopefully a few Irish for you next.

Thanks for Reading.
Posted by RogerC at 14:06