With my daughters graduation I had an extra day off today so two games in three days booked at the home of Chris Flowers Both games involving a French force defending the same terrain. The first is a 1940 game, the second on Sunday will be a cold war gone hot game with the French defending against a Russian break through.In both cases I am the French commander and John is my opposing number. The game was played on a 15 x 7 foot table. 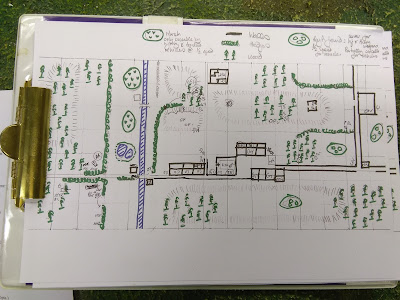 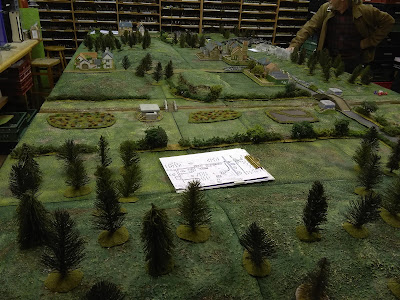 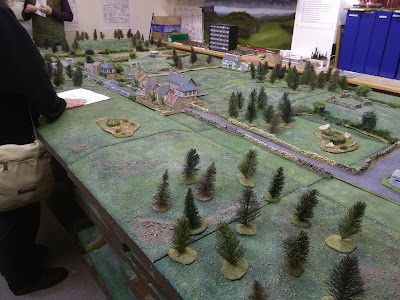 I will report the second game separately, for this first Mike, Richard and I had to defend 15 feet of table against the worst the third Reich could throw at us. 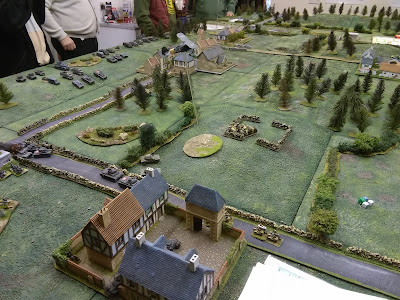 Then French forces had an Infantry Brigade and Armoured Regiment with some additional bits as follows.

The main objective for the French is to hold the two main roads that run through the village.

We chose to defend these two roads in strength and use the recce to slow the Germans down on the French left. So from left to right a company of cavalry in one building in the farm. Two supporting Panhard's in the field next door and a pair of Somua;s in the stone sheep pen. Towards the front an MG in the pillbox and the second company cavalry dug in behind the wall across the road. A Char B and a 25mm Portee occupy the wood and covering the 2 feet gap between the recce and the village. 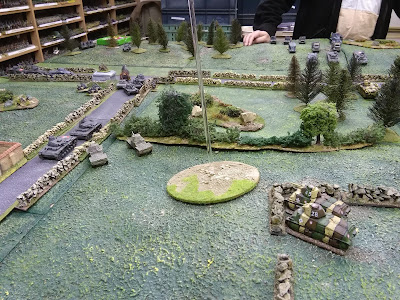 In the village we had a battalion each side of the road occupying the buildings. The hills behind the village holding 2 companies of tanks and the artillery.

Finally across the river and behind a march and covering the bridge crossing is the last battalion with a Char B a Portee and an AA Gun under the command of Mike. 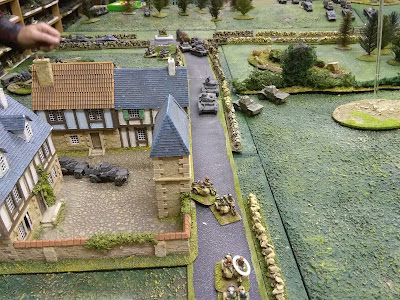 Our final reserve holding the farm at the table edge the Germans need to exit is the 10 man Brigade HQ,

The might of the the Reich were led by CinC John, Malcolm, Brian and Derek.

From the German right to left this was:

So in very broad terms 3 1/2 French battalions vs 5 battalions of Germans and 13 French armoured vehicles vs 26 German AFV's, Also as we were playing Rapid Fire the French armour cannot move and fire but the Germans can. 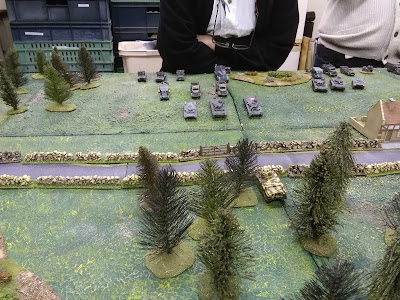 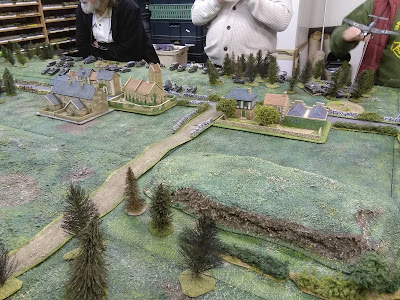 Brian took the German Recce with a company of 38ts on the extreme right flank of their German advance whilst I took the French cavalry facing him and a battalion opposite John who took a battalion of foot and 2 companies of tanks. In the centre Richard commanded the next unit of French foot, this time elite with 2 companies of Somuas, Derek facing him with a similar command to Johns whilst to the extreme German left Malcolm advanced with the armoured infantry and armoured against Mike's battalion of foot and Char B.

The Germans opened up with Brian pushing the Recce in from the short edge on the German right wing, driving straight up to the pillbox and the farmhouse, whilst the rest of the German forces came on a 6 foot frontage with each player roughly deploying over 2 feet and moving the armour twelve inches in to go hull down on the crest of the hill with the infantry and artillery just behind the crest where it cant be seen. A firefight between the German recce and French Cavalry saw small numbers of casualties on both sides. 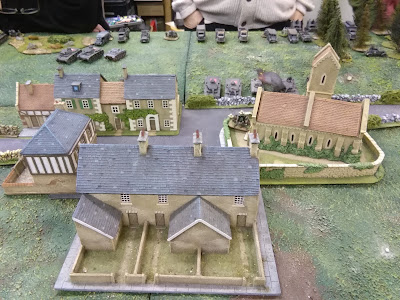 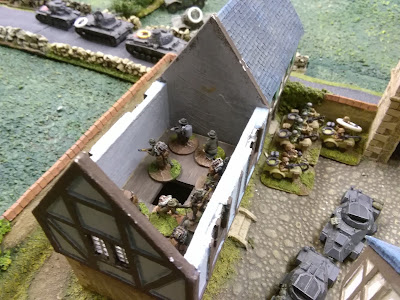 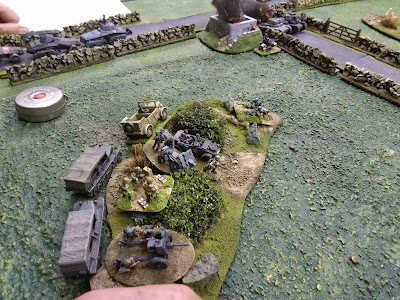 Move two sees the Recce's armour support their advance and the first vehicle burning as the recce's PZII catches a shot from a Panhard. The German main thrust trundles down the hill towards the town and loses a a truck and 6 men to mortar fire.

Move three and the German recce have pushed past the cavalry, leaving elements to subdue them but now have a further burning tank as the Somua's join the firing. Stukas and artillery fail to cause any casualties on the French armour who promptly withdraw over the crest of the hill.  The main thrust reaches the road at the edge of the village and the defenders open fire taking out another PZII and damaging a PZIII whilst the 105's destroy a Stug and the German armour starts to probe the defences over the river. 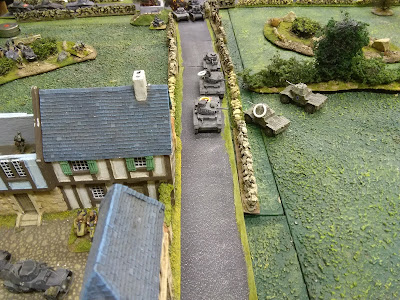 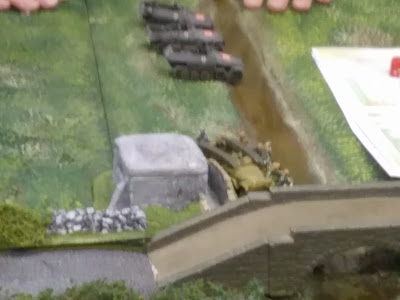 Move 4, the German recce have become bogged down in a firefight with the pockets of defence on the German right, the Char B's have both fired and inflicted casualties but Brian's takes a heavy  damage. The French battalion HQ in the church is wiped out by artillery, mortar and infantry fire and no less than 7 tanks, whilst the Cavalry recce  are shot from behind by John's tanks who cant penetrate the Char B in front of them. Another well aimed shot from the 105 takes a second tank out and as the panzer grenadiers in their half tracks cross the river the first is destroyed with heavy casualties to the occupants. 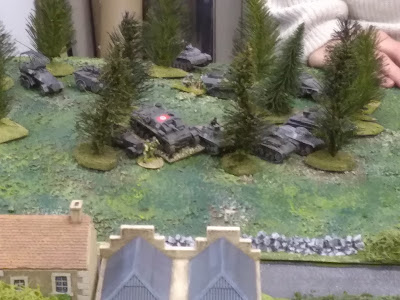 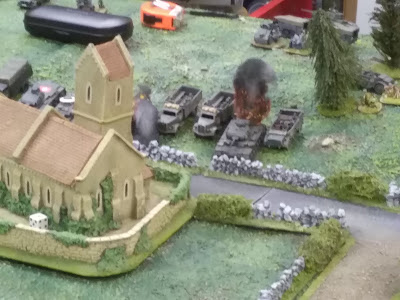 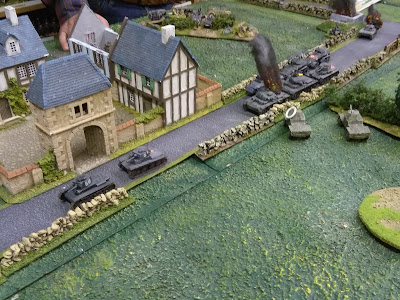 Move 5 and the recce motorcyclists are down to 8 men from three units of 8, four of their tanks are burning and the first of their armoured cars is damaged. in return they have reduced the first Recce Cavalry unit to just one man and blown up the bunker with the MG and forced the second company out of hits building and further into the farm complex. 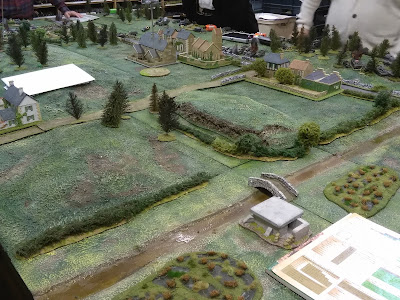 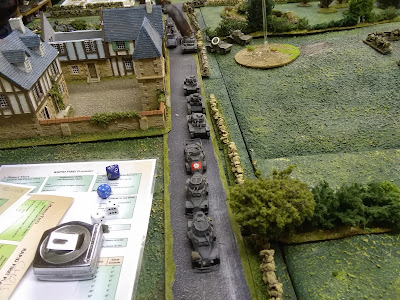 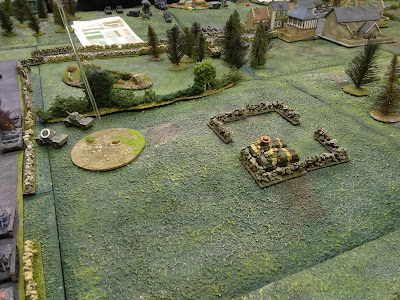 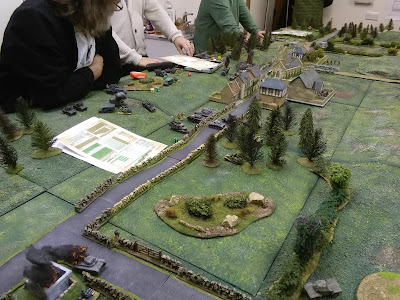 Derek tries to close assault the first of the houses in the village but is driven off with heavy casualties, a PZIII creeping around the wood between the recce and the village is destroyed by the Char B and a second half track is destroyed with heavy casualties crossing the marsh. The second unit of Somuas on the hill behind the village open up with no effect and are forced to withdraw when the 88 heavily damages one of them. 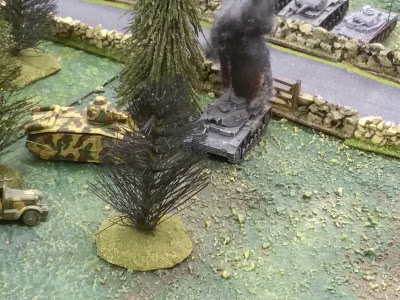 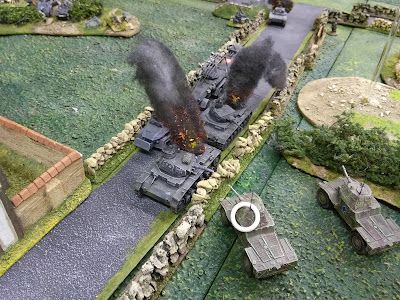 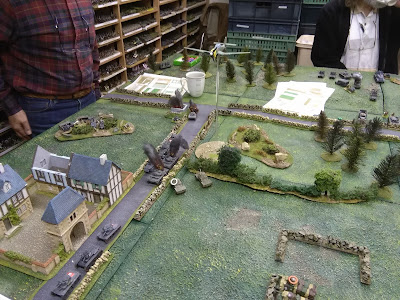 Move 6 and both Panhards are heavily damaged but not taken out, the French recce destroy the crew of the German recce mortar and a PZ38T is taken out, the troops in the village open fire on Johns infantry taking out his mortar crew and the German panzer grenadiers take more casualties as the slog across the marsh. The single French survivor of the French recce cavalry company continues a one sides and amusing struggle with the 2 survivors of a motorcycles recce company, neither able to hit the other as both require a 6 on a D6. The bunker holding the bridge is destroyed by the Germans but too little head way has been made and two many casualties taken for the Germans to be able to take any of their objectives. It is 4.30 we have been gaming about 4 or 5 hours. Whilst the Germans have not really had time to take any of their objectives it seems unlikely that they have the strength left to take both roads even with another days game. 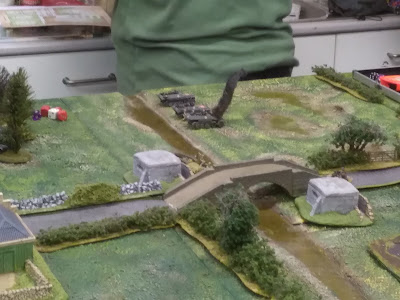 The Recce, Panzer Grenadiers and at least one other German battalion  are nearing morale from casualties and well over a third of the armour has been destroyed. In comparison the French have not lost a tank yet (although there are quite a lot of heavy damages scattered about) and whilst their Recce Cavalry have almost been over run the three infantry battalion are still in very good shape.

In the time available the Germans might have managed another foot or two of advancing, especially if Brian's recce had pressed on rather than stop to fight the pockets of resistance they encountered, that said if he had dashed over the fields at my armour he would have sustained more casualties and the recce would have probably have ceased to exist as a fighting force. The Germans might have attempted to charge down the roads ignoring the forces blocking them, possibly the only way they could have achieved their objectives, however we still had a company of tanks and a portee anti tank gun further up the central road so even this would have been a big ask.

Overall a fun game, I love early WWII and the game looked spectacular. Played in a great spirit with a lot of laughs (and a few groans) the usual fiery political debate at lunch time again done is the best of spirits and entertaining to sit back and watch.

Thanks for the game gents and I look forward to another go with a different force of French on Sunday.