So again I decided to base a unit myself the basing department is far too busy enjoying herself and receiving Theatrical Plaudits for her performance in "Not a Game for Girls" this weekend.

I should also apologise as I meant to load a battle report for our recent play test of "British Grenadier" AWI rules, but had a lot of technical issues with the computer and struggled to upload all the photos, hopefully have this for you soon.

This unit represents any of a number of Femanning Regiments, although the flag is I believe Upplands. There were at least two units in this colour scheme at Kliszow in 1702.

We explained that the recruiting process in Sweden required each large farm or village to provide 2 soldiers in return for a degree of tax relief, in times of war a third man might be raised and a new third man regiment raised or Tremanning. Femanning was a fourth regiment raised on the same principal. There were many of these raised to counter the Danish invasion of Scania.

This regiment is made entirely of Ebor Miniatures http://www.eborminiatures.com/ , I do like these marching figures, that and the Grey faced yellow add a contracts to my charging boys in blue. The flags are from the excellent Warfare Miniatures http://www.leagueofaugsburg.com/shop/products-cat-16.html. 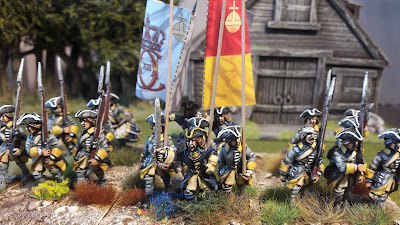 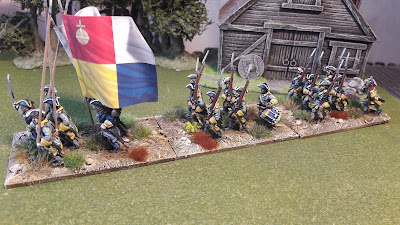 These two shots give you an idea of how I use the space on the deep bases, in particular the outer bases with their virtual third rank. 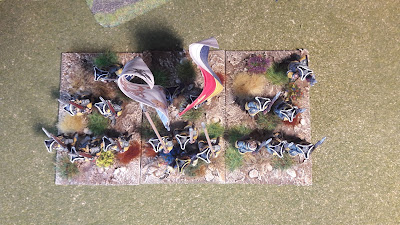 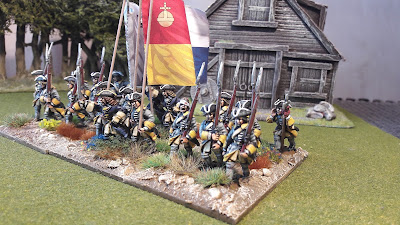 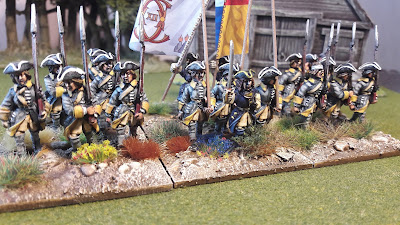 This takes me to twelve battalions of foot, which was my original target, so really pleased with that. Six units of horse so a way to go to reach my target of ten. All that said already have a couple of units of foot to paint so my target may just have increased slightly!

I hope to have the battle report for British Grenadier in the next few days but until then, thanks for reading.
Posted by RogerC at 00:25