So I had a great game at wargaming chum Dave's just over a week ago. Apologies for the delay in my report, laptop issues!

For the most part we have used Black Powder fro the American War of Independence, I like the flexibility and speed of the games and they do feel like they suit AWI. However we have used them for a number of periods and Dave was keen to try British Grenadier which he had played before with varying degrees of success.

So Dave invited Howard and I to try a game using his fantastic collection. Howard and I would command a British Brigade each trying to catch a retreating Patriot/Rebel army. Dave would play the American forces who had turned to fight a delaying action. 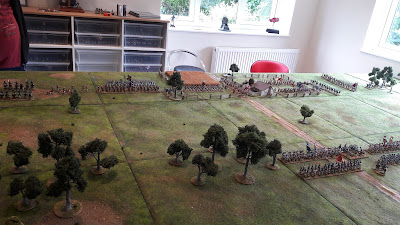 Hiding in the woods to the left:
Brigade of 4 Militia regiments
Light gun
Company of Rifle skirmishers 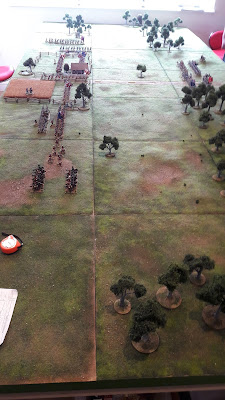 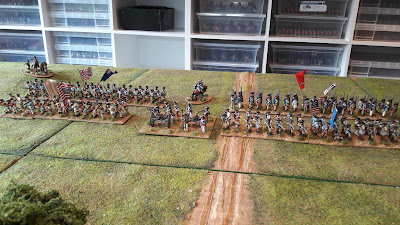 The British were designated in loose order and moved on the roll of 2 average dice. Picking up a disruption point on the roll of a 2. Hessians moved on 2 d6 as close order troops picking up disruptions on a 1 or a 2. So average movement of about 8 inches a turn. Musketry range is 12 inches.

The first thing I found was that moving in column did not seem to have any benefits at all So I quickly stopped. 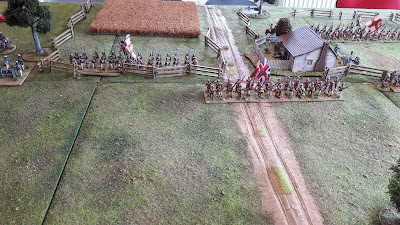 Units can take up to 3 disruption points. In terms of casualties the first three can be taken as disruption points before figures are essentially removed. This means keeping DP's down is really important. You can remove a DP by doing nothing for a move. You can remove two if you do nothing and attach a General. This all feels very realistic, dressing ranks and filling gaps. It does however also have the effect of slowing down an already quite slow game as players try to keep DP's to a minimum before they get into musketry range. 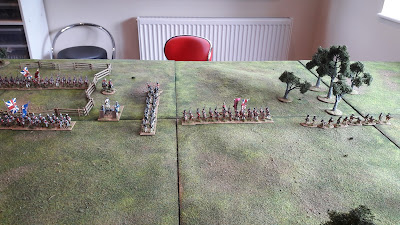 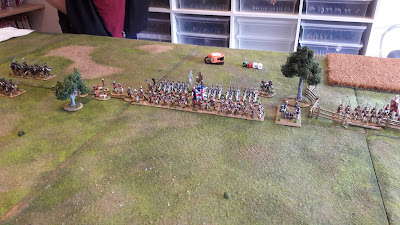 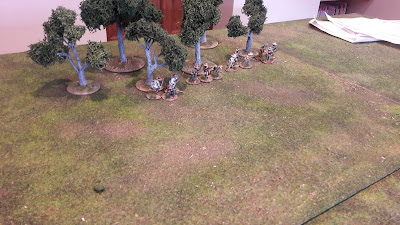 The British spent about 45 minutes advancing steadily and taking small amounts of DP's from movement and the American artillery before the American ambush revealed itself and advanced from the woods. From my brigade the fusiliers got a good roll and advanced to musketry range. Unfortunately DP's from firing and movement meant they failed to go in on their charge and the closing volley from the continentals in front of them forced a retirement blocking the Hessians behind them from any movement.

The skirmishers on both sides moved into a long musketry duel which lasted the whole game as both sides forces were whittled down. The rest of the foot and the cavalry manoeuvred to get into strike range where cold steel could potentially carry the day. 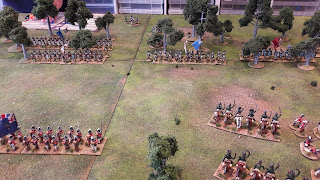 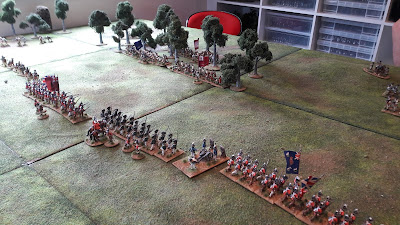 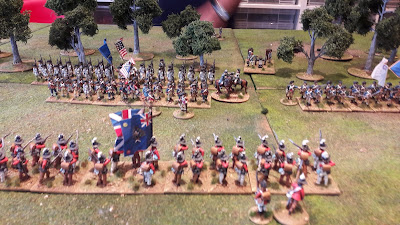 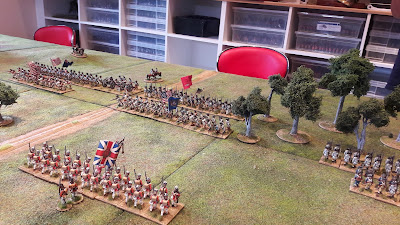 The British foot were taking heavy casualties on the left from Dave's militia , with the guards being forced to retreat due to mounting casualties and a morale test, heavy casualties also in the centre from his guns. On the right the first troop of cavalry managed to charge the flank of a continental regiment and our first melee ensued. We were now about 2 hours in. 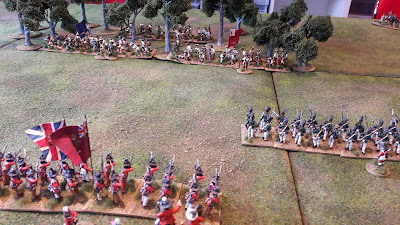 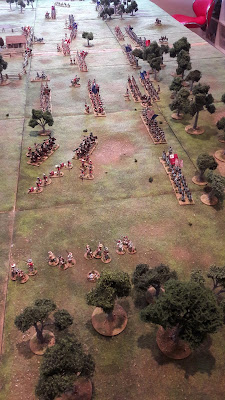 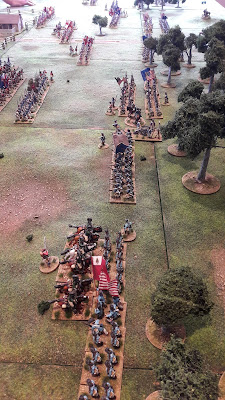 The continentals were able to perform an emergency manoeuvre to turn and face the cavalry charge but could not get a volley off in time. The melee resulted in a  retreat for the continentals and the cavalry pursued, however with three DP's they would not be allowed to charge again and finished their compulsory pursuit 3 inches in front of the continentals who would be able to fire at them next turn. Oh dear.

Mean while int he centre a musketry duel saw both sides start to take heavy casualties. The British Highlanders charged a continental battalion and forced it to retreat, whilst the second battalion of highlanders charged the guns with predictably bloody results. I wont do that again! 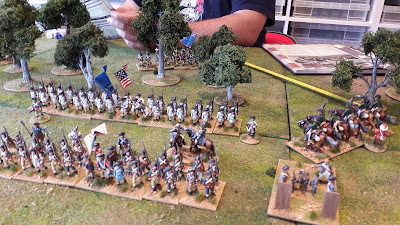 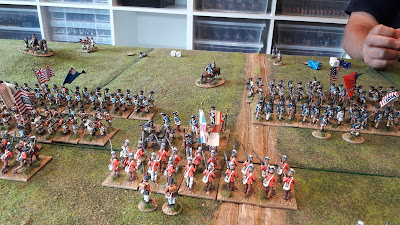 The second troop of cavalry charged the flank of a second regiment of continentals with almost exactly the same result except the cavalry were able to avoid a disastrous pursuit. We were in amongst the rebels but making heavy weather of doing anything meaningful to them. 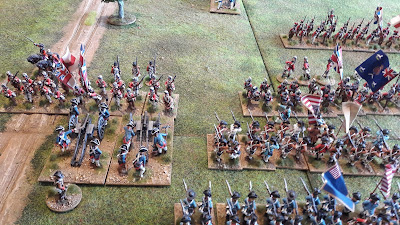 At this point after about 4 1/2 hours of gaming we called a halt and took stock.

It had taken a long time to come to grips and despite 4 melees and numerous bloody firefights every single unit was still on table. The Americans had 3 units retire and the British 2, but all were still on the edge of the fighting and available to be rallied and rejoin.

This left us in a quandary. The game had played well, felt fun and realistic, but took far too long to get to grips and simply did not give us a result. All Dave's previous games had the same outcome. Our experience of Black Powder had been pretty much the opposite, less period flavour but quick movement and a result in 2-3 hours for big games, so what to do?

We have decided that another game is in order and we want to consider some alterations. Start closer, increase movement, increase firing ranges. Nothing dramatic, just 2-3 inches on each and maybe starting a foot closer. This perhaps being the best way to see if we can bring the British Grenadier system to a point where we can achieve a result in an evenings gaming.

We intend another game soon and I will share the results, In the meantime the basing department has been for a visit and I have some goodies to share so watch this space.
Posted by RogerC at 13:51