The Kikuyu are Revolting AAR

After a couple of weeks away Chris Charlton was back for our Monday night game at Steve's, this time he brought his beautiful Kukuyu Revolt collection for a game of Sharpe Practice. 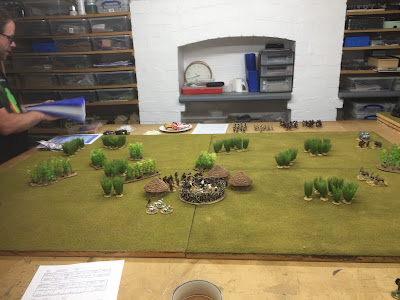 This is 1910 so the Imperial forces are mainly armed with Martini Henrys, in Sharpe Practice thats firing twice each turn. 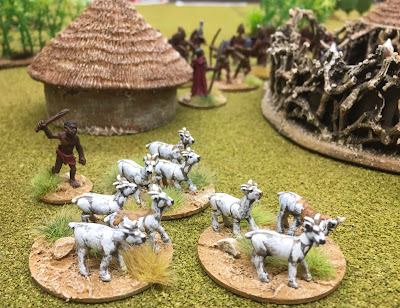 The Kikuyu and the Masai Auxiliaries have spears with the Kikuyu also having some bows with a 6 inch range so they need to get close. 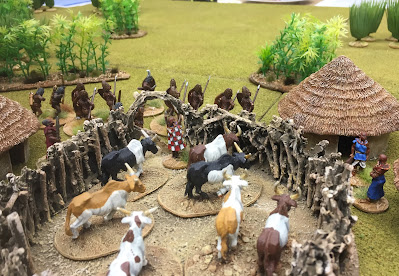 I rather rashly volunteered to be Kikuyu, Steve was the Colonial oppressor. 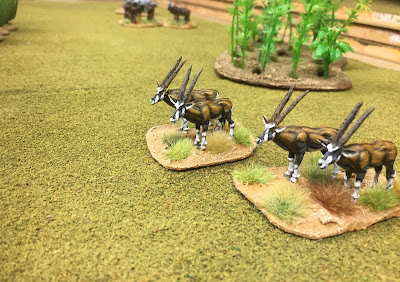 The Kikuyu has 7 groups of 12 Tribal Warriors with 4 level 2 leaders. 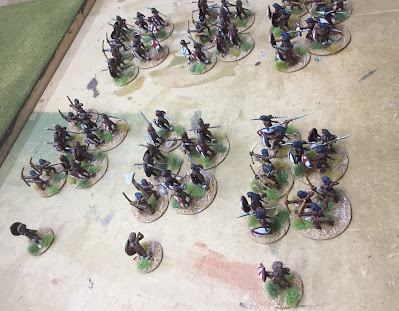 The Colonial forces had 2 units of 8 Kings African Riffles and one of Police supported by two units of 12 Masai. A level 3 leader and 3 level 2. 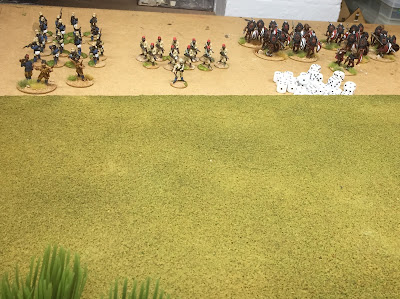 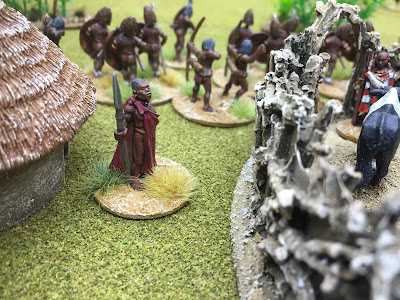 The Kikuyu looked imposing in the large units, unfortunately we had not put enough cover down for the large units to remain hidden and there was virtually no where on table where a unit was in full cover from the Breech loaders. Coupled with some amazing dice from Steve and the worst dice I have had for a very long time this turned into an embaressingly one sided game. 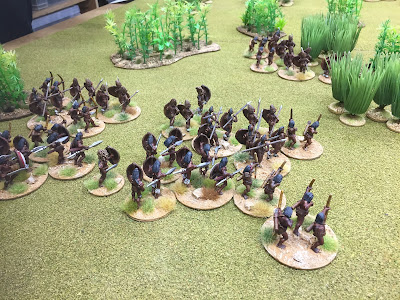 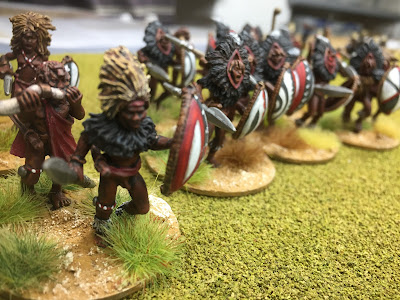 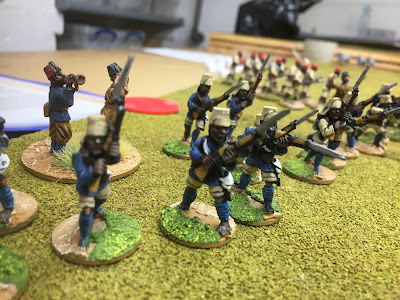 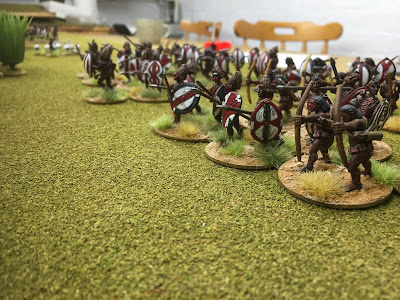 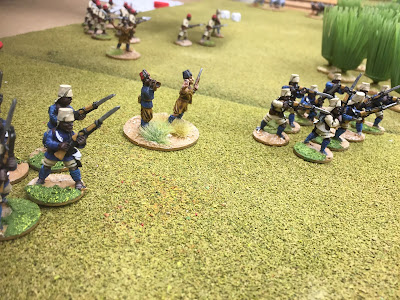 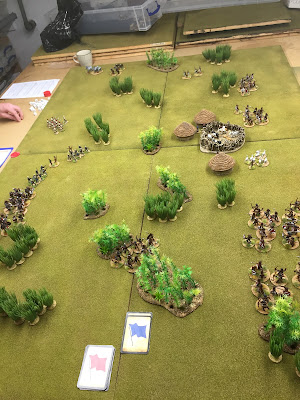 I am going to leave you with lots of pictures of the beautiful collection and not much narrative.
Suffice to say that within 2 moves the Colonial troops had fired 6 volleys and most of the Kikuyu had so much shock they could no longer move forward,
My bad luck included two of my leaders being hit by Steve's fire, one of them twice and another falling in a pile of elephant dung and losing a leader status. The Kikuyu spent most of the game finding out how many men can hide behind one bush (Not enough was the answer)
So in Leiu of an interesting game report heres some pictures. 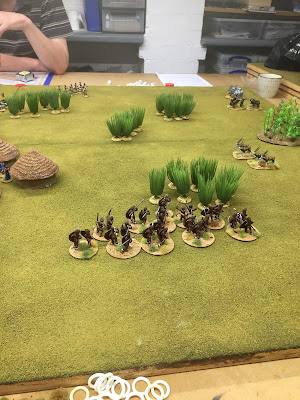 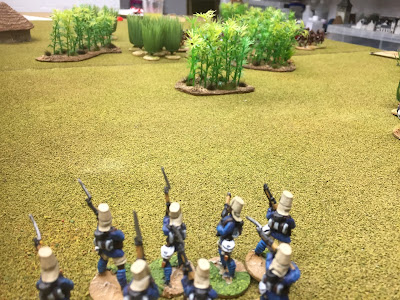 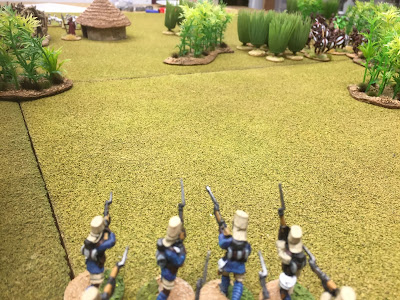 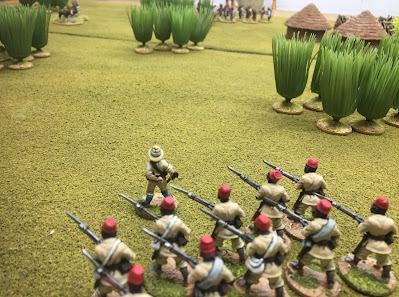 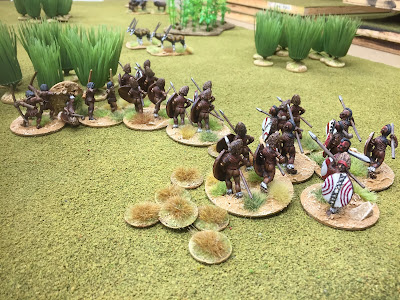 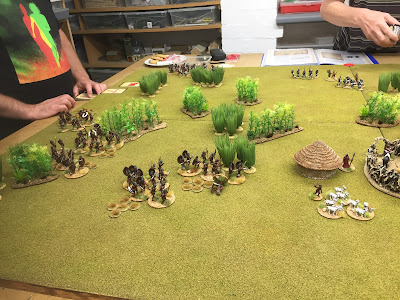 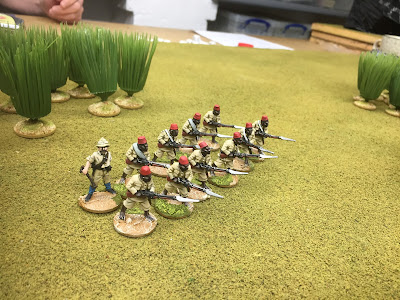 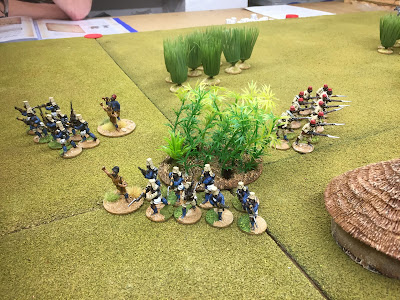 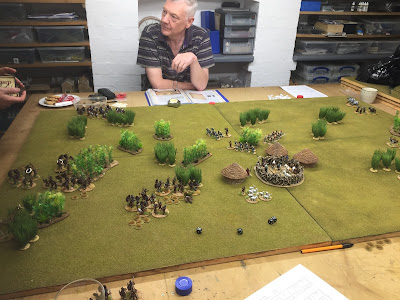 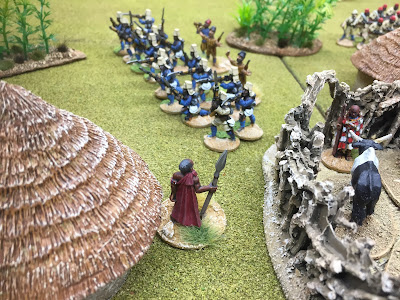 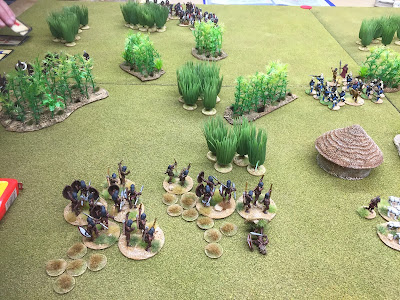 Suffice to say the Kings African Rifles captured the Kikuyu leader and meandered off table with him. Every unit of Kikuyu had suffered horrendous casualties and my force morale was almost gone, Steve hadnt even suffered one point of shock at any point in the game, my Kikuyu never got with 2 feet of him. Still I'm not bitter!
To be fair the last time we played it the outcome was much more even and the cover looked fine until we got the figures on. Well lessons learned for next time.
Posted by RogerC at 10:45