I continue to be enthused by the 40mm Figures and make a little steady progress. I managed to kick off this weeks work with some more French Grenadiers and my first British line, an Officer of the Connaught Rangers. 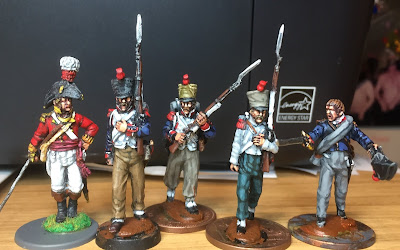 I plan a small formation of Grenadiers, two groups of 8 with a leader, this takes me to 9 figures and the Leader so I will probably focus on a few more of these over the weekend, see if I can get a formation complete.
The British officer is the first of my redcoats, I have a lot of these some what by accident. I picked up a bunch that were part painted from ebay, the previous owner had done a nice job but I needed to make them match mine so used his painting as a base coat and changed the facing colours so I could have the Connaught Rangers. I will try get a few more of these started once I complete the Grenadiers. 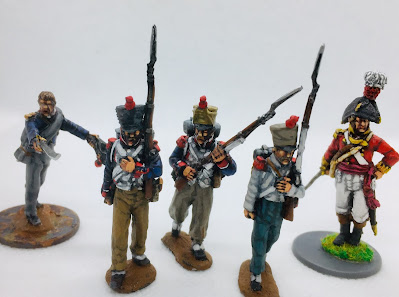 They are all Perry's 40mm and the seperate heads allow me to create a bit of variety in the unit along with different coloured trousers and shako covers, the odd figure in a different pose such as the middle figure at porte and the odd fiure in sleeved waistcoat like the right hand Grenadier will add to that variety so it hopefully doesnt look like a bunch of the same figure. 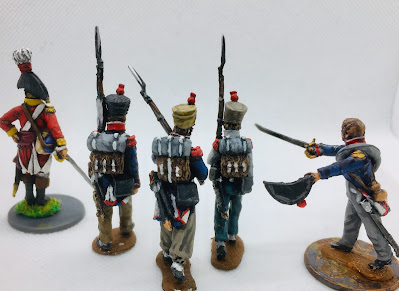 So with a head start and the wind behind me I have managed to get a fair bit completed, these French Grenadiers now mean I actually have 16 complete, this reaches my goal of two groups of 8 Grenadiers for the French.
The guy with the bayonet at charge seems to be looking at everyone else wondering why he is the odd one out. The different shako and trouser colours seem to have done the trick in making these all look like individuals I feel. 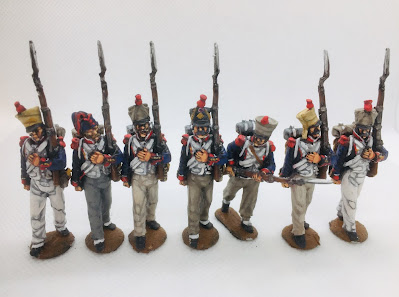 Alos managed to finish the last four 60th rifles. That gives me four units and enough left over for a unit of 95th as well. 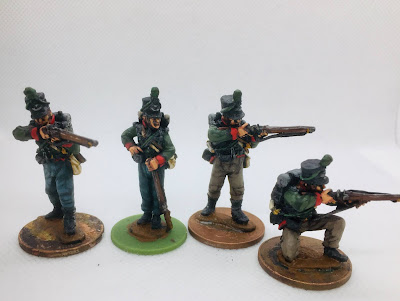 This officer is really quite nice, done as 95th partially as I already have one for the 60th and partially as the company of 6oth and the small group of 95th along with the yellow faced British have a strong resemblance to the Sharp forces, the six 95th being the chosen men, the South Essex had yellow facings even though mine will be the 88th Connaught Rangers and in two of the stories Sharpe is supported by Sweet Wiliam and a company of 6oth. Just a bit of fun but nice all the same. 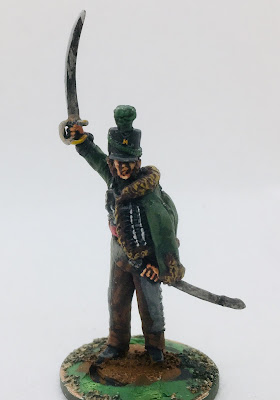 I have also painted the first three British line. The middle figure is Perry and the other two Sash and Sabre. I had my doubts about Sash and Sabre but they are easy to paint, lots of character and came out quite well. I am not convinced they scale well with Perrys mind you which are much slimmer. The British marching centre company figure is much of a muchness with the various heads not actually giving much variety at all. No idea if I can or will mix these in the units, decision for when I have a load more painted I think. Most will be in white trousers with some other colours mixed in. 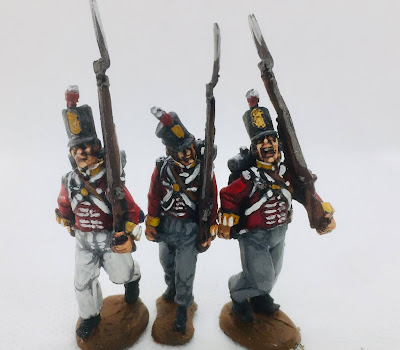 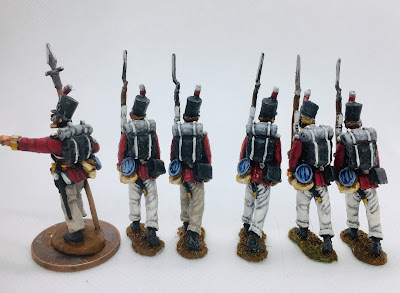 Before posting I managed to finish a bunch more British Centre Comany troops, a Sash and Sabre Seargent who I really like and 5 Perry Privates who also came out really nice, the slightly off white of the Seargent and one of the privates adds a little mix, more browns and greys mixed in as we go but white will be the pominant colour. 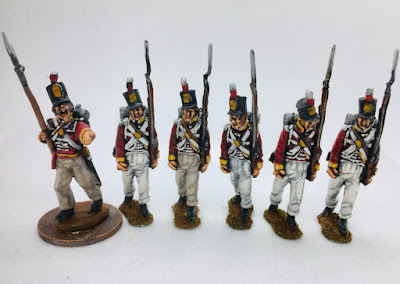 Finally a picture of all 16 French grenadiers stuck to bases ready for basing media to be added. I may get some more painted before having a go at the basing. A few more British then get stuck into the Spanish next. 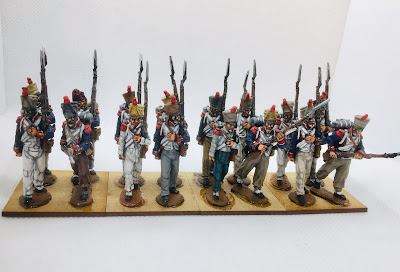 Nice to see pretty much completed units starting to come out, not a million miles away from enough for a small game.