Our game at Steve Shann's tonight was a second playtest for Bloody Backs, with Chris Charlton isolating Chris Flowers was my opponent with Steve holding our hands as umpire.

I would be rebels again, sorry Patriots! But this time I was attacking. 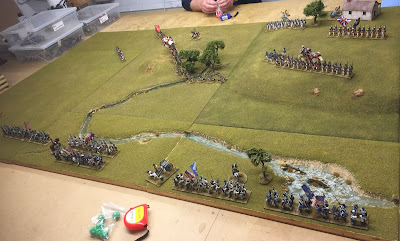 I had three Brigades, two of Continentals one with Two battalions and a gun the other with 3 slightly larger battalions with my left flank covered by a brigade of three battalions of Militia and a company of rifles.

Facing me would be two Brigades of Crown forces. Dastardly Tories! 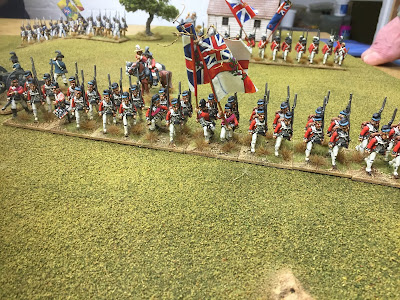 The left flank would be a large Highland and another large British Battallion with a gun supported by a Hessian battalion and a company of jagers, the right flank would be a further large unit of British regulars with a light infantry company and a small loyalist militia battalion.

So I had a larger force but the British quality was definately in their favour, the British regulars in particular also being very large units with a lot of firepower. 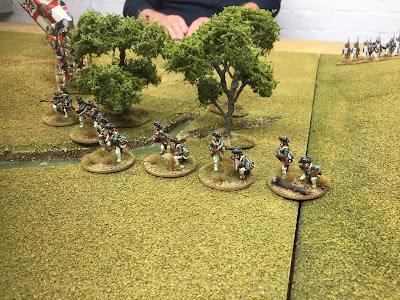 The game opened with the Patriot forces advancng steadily and the first casualty beign inflicted on the Highlanders by the gun. The British managed a couple of casualties in return from the Jagers on my continentals. As musketry is 12 inches we still had a little way to move to get into range. 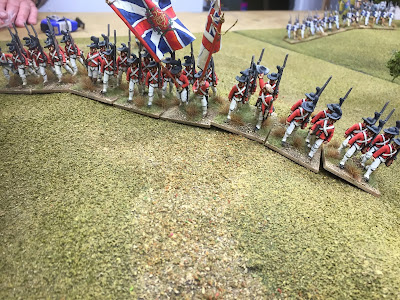 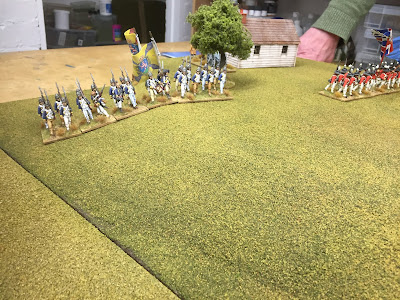 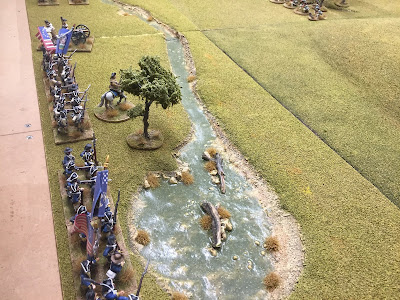 With six acivtion dice and decent generals we got moving forward pretty quickly. With the Jaegers taking ineffective pot shots.
Unfortunately for Chris though his Militia through really bad activation dice and failed to get any activations, a morale test before they could even join the fight. Another poor roll of dice and they flee to the table edge to be rallied. 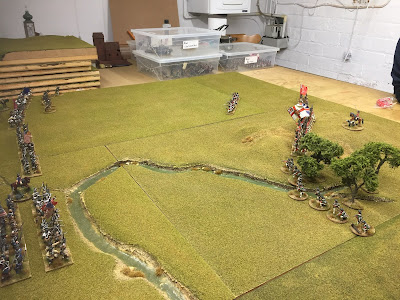 My return artillery fire was just as ineffective. 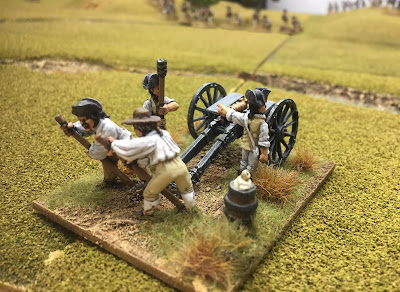 My rifles scored a couple of early hits on the British lights and Chris rallies the Milita on the able edge. 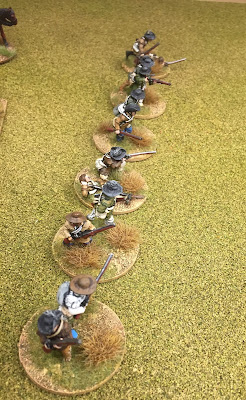 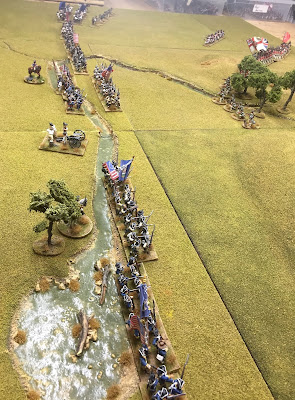 The British were happy to wait for me on their right flank as they had already lost one battalion, but Chris pushed the Hessians and reserve regulars forward on the left flanks to support the Highlanders. 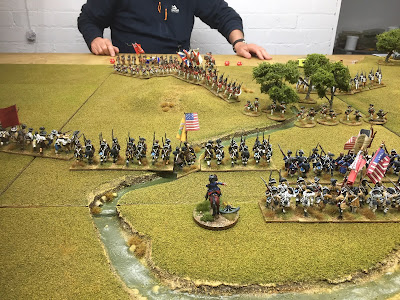 Pretty soon I was in musketry range and trading volleys supported by my gun and starting to inflict casualties on the highlanders. 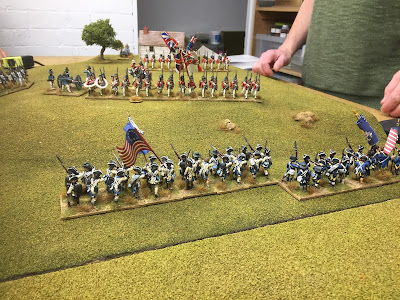 However the shock on my other Brigade of Continentals was mounting with rifle fire from the Jaegers supported by the British gun. 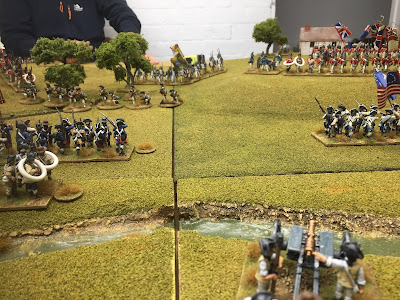 I got to short range against the Highlanders but this also meant they were in short range of me and had the support of the reserve regiment too. 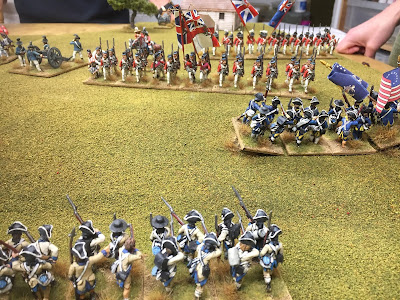 Typically the Hessians were very slow to get moving and difficult to manouvre but it hardly mattered as the shock mounted on my Continentals and I struggled to get them to do anything. 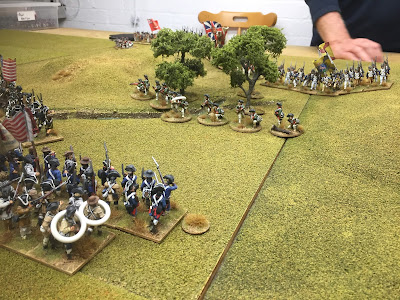 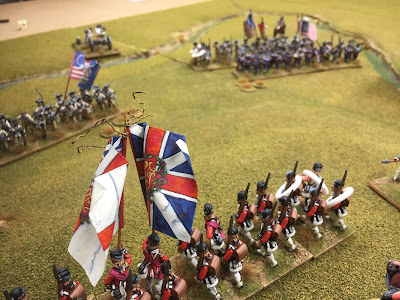 On my left the last regiment of Continentals was in position to trade volleys with the right hand unit of British regulars and the Militia were moving up to support. 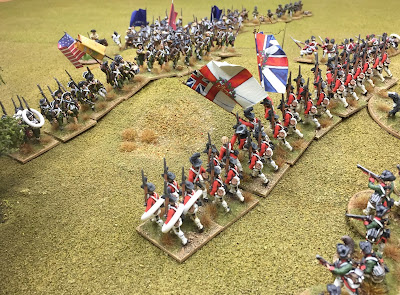 My Brigade of Milita were now all able to concentrate their fire on the British lights but I was already loosing the exchange of fire with the British line to their right. 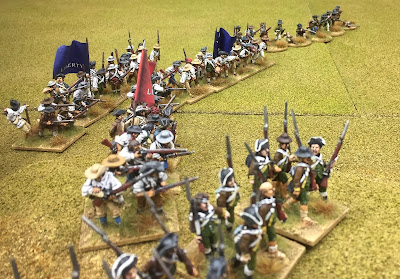 My continentals had now ground to a halt all along the line and were unable to reposition themselves so my barley touched reserve unit could come into action. My advance was stalled and the exchange of musketry was not going quite a swell as I might hope. 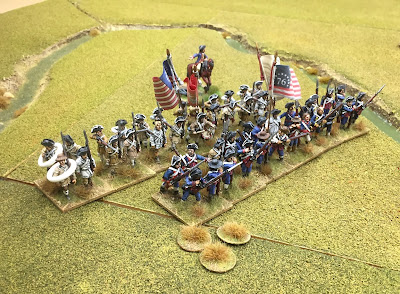 With my right flank starting to take too many casualties, my centre halted and things in the balance on the left we decided the British had held the field for today. 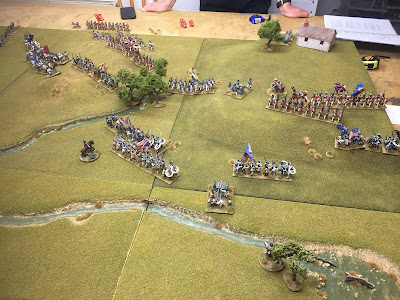 Another good play test for the rules and soem food for thought, I do feel it reflects the period rather well, I will need to learn the best way to use my Pariots to best effect.
Thanks for reading, stay safe folks.