I have made good progress with the Skirmish formations for this project, so my focus is shifting to the Line Groups and formations.

I am particularly focused on the Spanish and really enjoying painting these guys. Again you can see  a little of the variety in the figures from behind the chaps in breeches have no cooking pan on the first of this figure I painted. 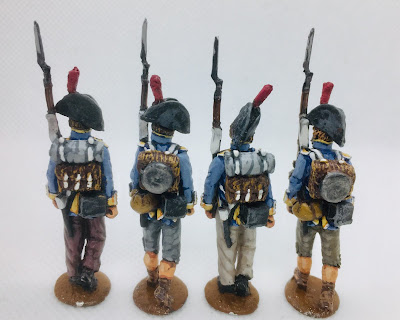 Trouser colours are going to be very varied but with quite a bias to lighter colours, these figures in overalls have waistcoats peeping from under the coatee that isnt on the first figure. I wont be basing any of these just yet, I hope to get a bunch extra done before I start deciding which figures will go together on bases. I have also made the hair on these guys lighter, the first lot all had black hair and moustache, now I know not all spaniards are dark haired but with these being Irish I felt I really needed to throw in some lighter hair anyway. 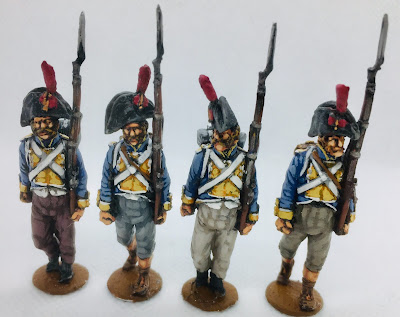 So with a Group of Spanish complete I thought I had better start on some French. I decided to start with Grenadiers. 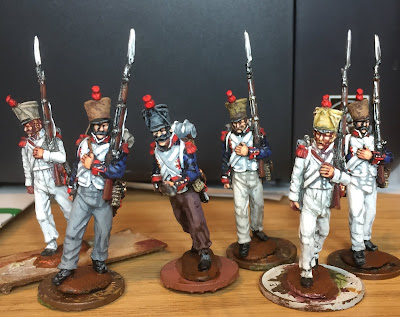 I did manage to finish off a couple of other skirmishers alongside these as well. 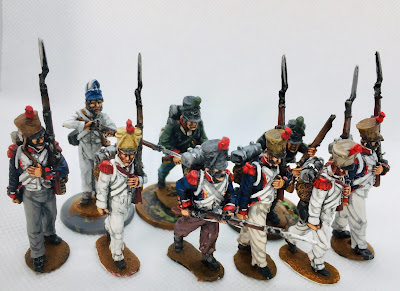 I intend to have two groups of 8 line grenadiers, the majority will be the marching figure in habit of which three are below. The advancing figure actually comes with a bearskin which I have swapped for a Shako, the bearskins may get used at a later date. The two marching figures in sleeved waistcoat then add some variety to the whole.  A good mix of shako cover and trouser colours will mix these chaps up a bit. 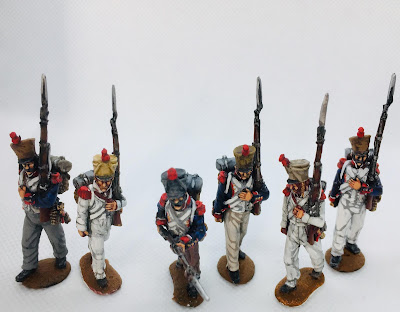 A couple more 60th Rifles, still quite a few of these to do, I may do the last 6 as the 95th with a leader to match, lets see. That will give me 5 units of rifles eventally each with a leader. 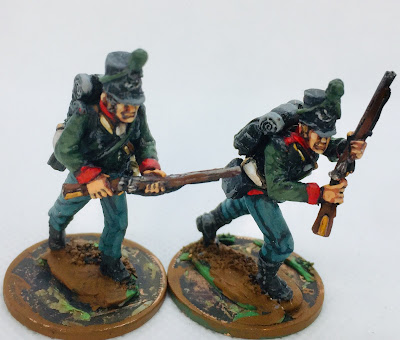 Lastly this Spanish regular will mix in with my Guerilla's bringing them to 7 so a skirmish group with a leader. This is a slight conversion as the riginal had a cast on bell top shako which I had to saw off to add this Bonnet de Police. I cant help thinking he looks a bit like Guy Martin! 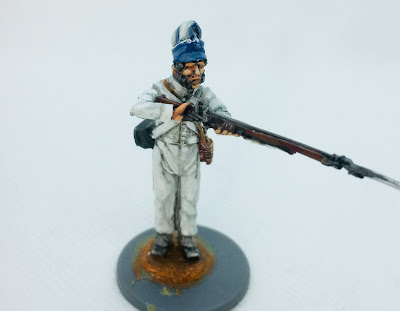 I am going to try get a few more French complete and some British line of which I have far too many. I picked up a bunch of British off Ebay some of whom were painted, reasonably nicely too, so whilst I will feel the need to make them match mine these will give me a little headstart.
Steady progress I am pretty happy with how its all going.