For quite a few years I have had this bunch of toy trains in a drawer with a view to having a pop at turning them into an armoured train or two. About 6 years ago I made a start which was so horrible I ripped all the card off the train and dumped them in a drawer.  Cant remember where I got them but have a feeling Mr Charlton was involved. 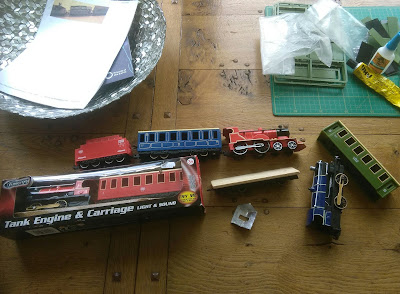 I decided to have a break from Poles, Cossack's and Sikhs for the bank holiday weekend and try get some Russian Civil War figures completed, scanning through the Lead Adventure forum for some inspiration I came across a fantastic home made armoured train pieced together from similar toy train parts and decided to resurrect the idea. 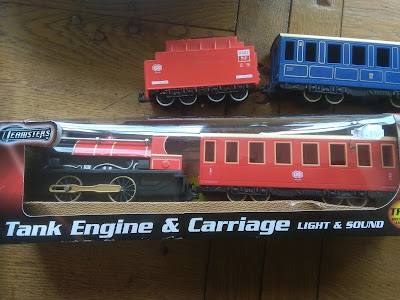 As will become obvious I am not a gifted modeller, I can do OK with the painting but building models is really not my thing, and scratch building even less so. Still I was willing and as a starting point I already had a flat car made from the chassis of one of the carriages and some balsa wood. I also had a naval gun bought from the Virtual armchair General some years ago. 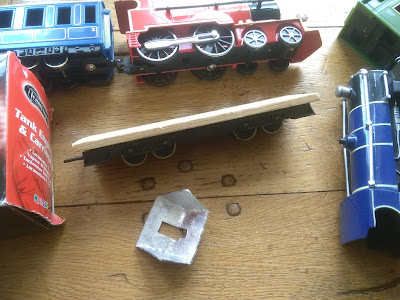 I decided to give myself a fighting chance, so instead of a an all singing and dancing fancy armoured train my was to be a hastily converted goods train with some boiler plate slapped on and painted battle ship grey. Improvised armoured train being the correct terminology I think. There were  lots of these home made armoured trains cruising the rails of post WW1 Russia so all good. My first task would be to start on a gun carriage and the steel coal car looked favourite for converting. 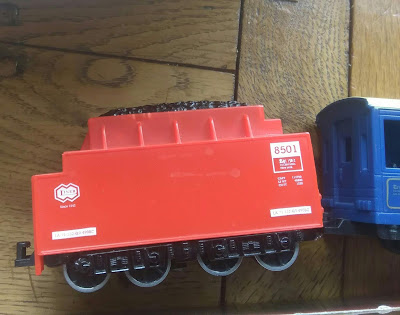 The significant number of parts for the gun was rather off putting mind you. 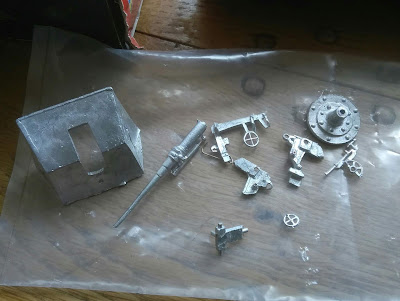 Hack saw in hand first job was to chop off a third of the coal car as this is where the gun would go. I had an image of the Gun shield sitting across the front so the whole was quite enclosed. It didn't quite work out though. 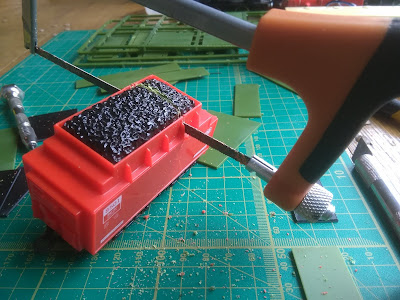 With the front chopped off I put a new floor in and a roof where the coal had been. 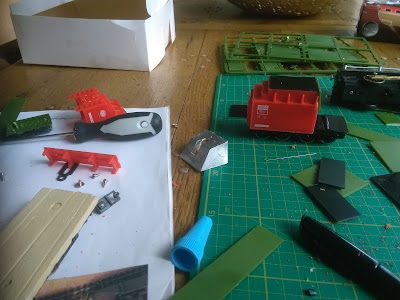 I then took the carriage and glued on some plastic sheets and drilled holes in the corners and edges to give the impression of bolts. Now ideally these should be raised but my talents don't stretch to making tiny rivets in 28mm so holes would need to do. Checking the gun and it does at least fit on the space created for it. 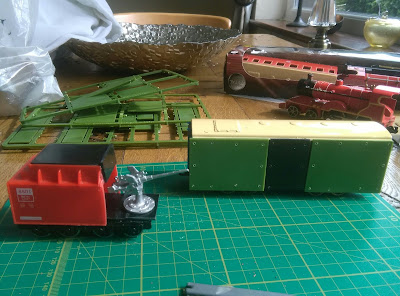 The Engine then gets the same treatment, MDF though as I have run out of plastic bases, starting to wonder at this point if it was a good idea. Still keeping it simple is helping. 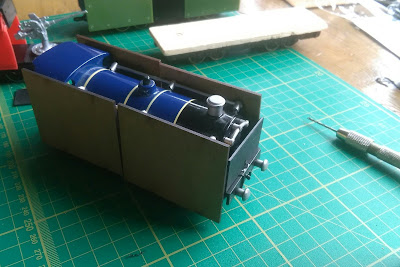 I bang some smaller pieces on as steel covered windows for the carriage and then prime the whole lot up in black. Already it looks slightly less awful and I am inspired to carry on. 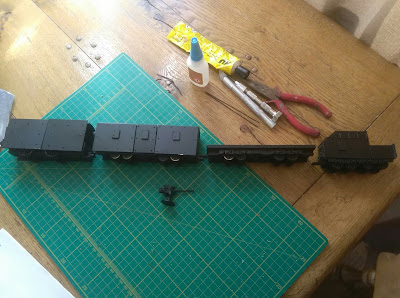 Instead of the shield for the gun which looked rubbish I have added skirts to the cab to give protection to the gun crew. It doesn't look quite as bad as I feared. 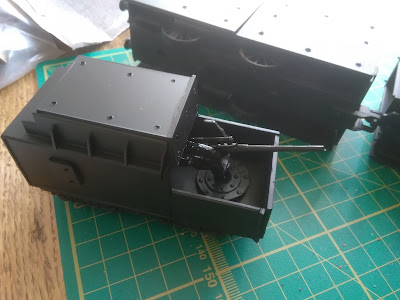 All four are now ready for painting. As mentioned battle ship grey is my colour of choice in this case, most trains were either green or grey from what I can see. 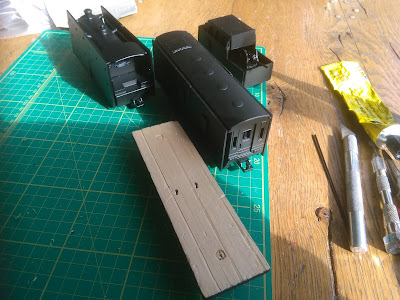 A dry brush over the exposed parts of the engine leaves it a dusty black and then dark grey slapped over everything else. 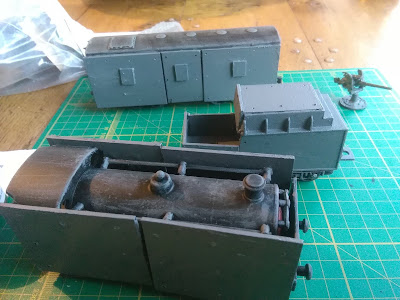 A mid grey dry brush and a further one with light grey and we are looking something like, I slapped some brown on the flat car and then dry brushed it ivory which also looks OK. 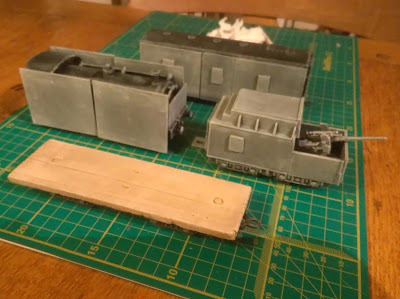 A coat of satin varnish leaves it looking suitably metallic and we are almost done. 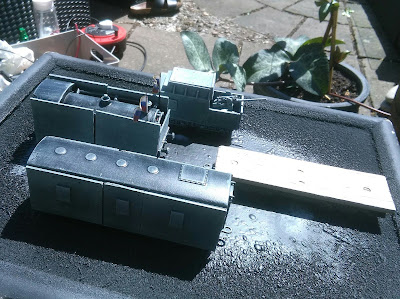 T o add a slight dash of colour I have added two 20mm Russian flags to the engine, clearly this is a White Guard, counter revolutionary Gangster train. I have two engines left and plan to leave one as un-armoured and the other as an armoured Bolshevik train. The last carriage will also be unarmoured I think. Ideal really would be to have a heavily armoured train and a carriage with machine turrets etc but I find that all a bit daunting to be honest. 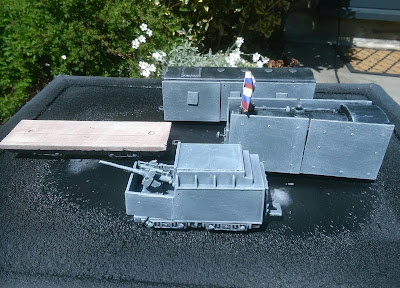 And here it is dropped onto some HO/OO train track which kind of fits and a gun and MG on the flat car coverign the rear of the train, sand bags might be a decent addition on this peice. 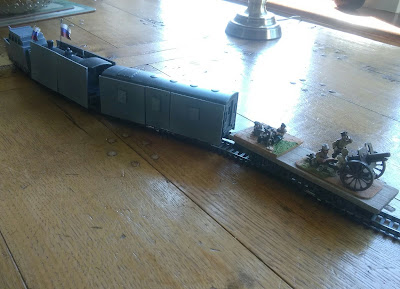 I only have corner track at the moment so the train is meandering its way forward in the general direction of the front. I actually think it looks OK. I was tempted to slap a political slogan on the engines plate armour to brighten it up and still might, but that's for another day. No doubt something suitably heroic and historically accurate will present itself. 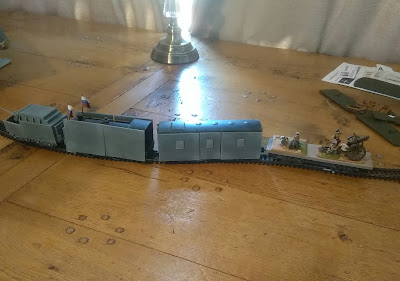 Amusingly the button in the middle of the engine still starts the train with sounds straight out of Ivor the engine, childishly I keep pressing this to annoy the missis as she is cleaning around me on the table. Well that's it train completed by Monday morning and the bank holiday weekend put to good use. I still need to go back to the Russian Civil War Cossack's and White infantry I intended to paint originally though, which lie part painted on my painting desk. 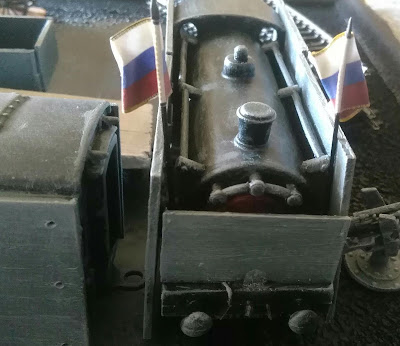 Interestingly as I was digging through a box to find the railway track I came across this old toy Sopwith camel, Its seen better days and is meant to be built using screws which have mainly been lost but I reckon I could do pull this together fairly simply for another Russian Civil War project (The crusader flags were just some other stuff I found in the box, I dont intend Hospitaller Biplanes) 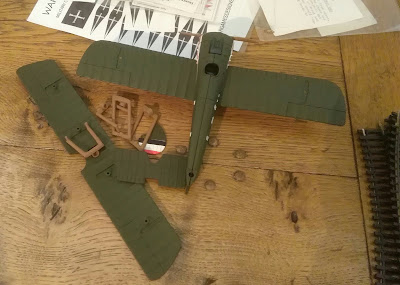 Maybe the plane is one for next bank holiday? I am sure I have a Pilots torso around here somewhere .........

UPDATE! After pickign up a tip from Trev on the Lead Adventure Forum I added rivets using 2mm rhinestones (nail art from ebay less than £2 for 2,000) painstaking but simple and the end result really li. 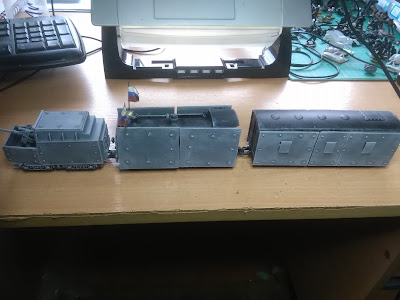 A dab of PVA dap te rhinestone p with the brush and dab it back on and then once its dry a splash of dark grey then a very light frey dry brush. All told less than 2 hours work to update it. I thought it worth sharing the update. 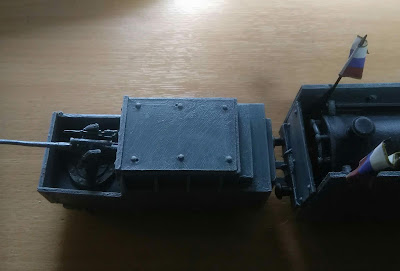