I mentioned in my last post that I was working on finishing up some units for a Bronze Age SAGA game at York Wargames show. I am making pretty fair progress so thought I would share this with you.


Before I do here are a couple of shots of my Warlords to give you an idea. I will do a full write up of the game with pictures of the full collection in February. 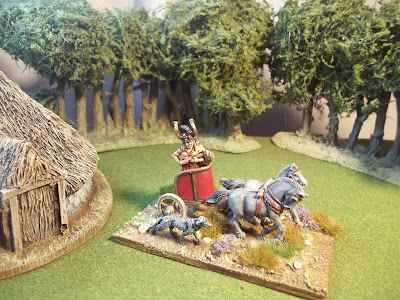 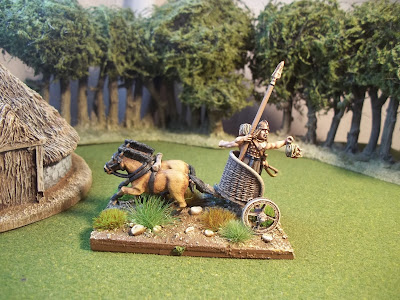 There is lots of evidence for chariots of this style in pre-celtic Northern Europe, with rock art and lots of artifacts in Scandinavia in particular. That said I imagine my Bronze age forces being in the British isles. There is much less evidence for chariots but we have found everything else in terms of weapons and clothing so I think it unlikely that Chariots were not here too. Recent discoveries around Peterborough of  a Bronze Age wheel perhaps bring us a bit closer.


The actual Saga forces are built around the various waves of Bronze Age invaders remembered in Irish Mythology. Very little remains of this oral history outside of Ireland so its a good place to start with the Fir Bolg and Mylesians amongst others battling for supremacy.


I have tried to keep weapons, clothing and armour as near to Archeaology as possible but to give me distinc sides I have a colour pallet to separate them. One side havings lots of reds and browns and mostly having a red sash/cloth belt, the other being blues and greys with a blue belt. The above Warlords being the leaders of the red and blue factions.


The Wargames Foundry range by the Perry Twins is still one of my favourites, it is quite small though so I have needed to add both extra figures and a number of simple and small conversions.


Units in SAGA are fixed sizes, with Hearthguard in 4's, Warriors in 8's and Levy in 12's for a point each. We can add characters and heros to this at a cost too. So the initial job was to finish off a couple of units to give us more points to play with. I am also going to need some eye candy for the table. 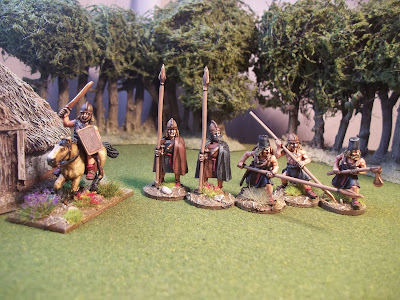 So the first lot of reinforcements have 5 foot figures, a horseman and a round hut my first building. 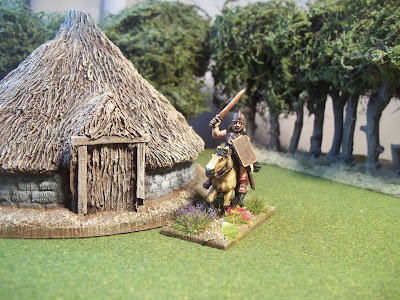 So our rock art images of horse warriors have oblong shields rather than the round ones of the foot. I have made this guys helmet Leather, whilst we have little in the way of evidence for helmet's of leather its far more likely than everyone running around in the Bronze helmets which were available, the formers for the helmets both leather and bronze would probably have been the same. I have gone with the a dunn colour for ponies along the line of the Dartmoor Ponies which we think roamed Britain 5,000 years ago. This figure finished off my third unit of mounted hearthguard, although I am sure they had a different name for it in the bronze age. The hut is I think from Grand Manner. 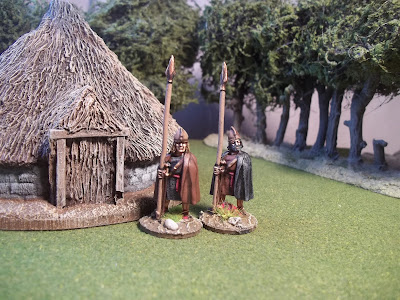 The next three pictures are 4 spearmen, added to four I already have that's a third unit of warriors complete. Typically we think that Bronze Age warriors fought using two handed spears with shields on their backs. The figure on the left is a base figure the one to the right has a head swap for variaety, the head is from the axe man further down who has swapped with this chap. 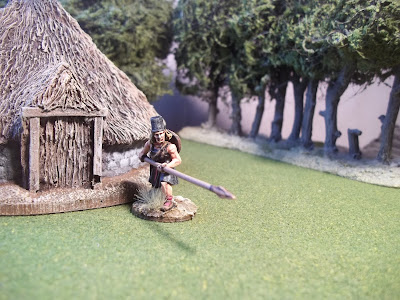 The next two are both also minor conversions. The one above has a head swap, the second is an axe man with both ends of the two handed axe removed and replaced with parts for a long spear. I particularly like the one below. 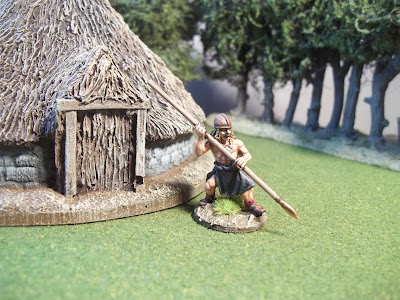 The axeman is slightly blury. I am using units of 4 two handed axemen or 4 swordsmen as hearthguard. This chap finished a unit of these guys. 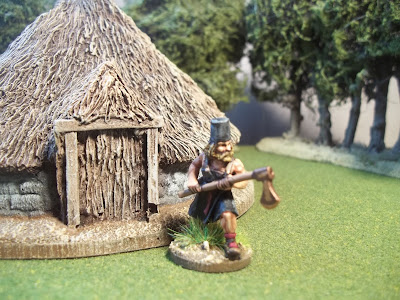 So having completed 3 units and my first building next up I think we will need some farm animals, outbuildings and monuments to their gods.