It is with a great sigh of relief and a big smile I share with you our first Sharp Practice game back at Steves after well over a year. 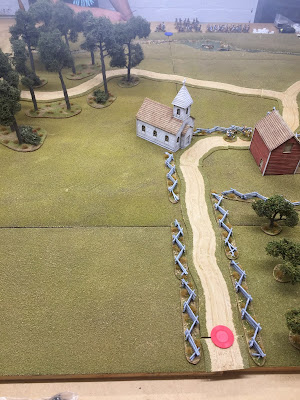 We kept it simple and fun, as always and was great to be back. 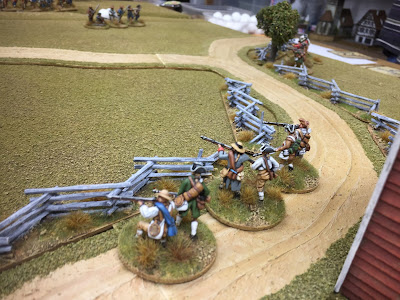 Our scenario has a barn full of ammunition next to a church with some local Tory Milita skirmishers guarding it. A force of Rebels (Patriots) are marching to steal the crowns munitions whilst another force of Crown troops and Natives march to stop them.
All good clean fun.
Chris Charlton Commands the "American" Forces:
3 x 6 units of Rifle Skirmishers with level 2 commanders
2 x 8 Continentals with level 2 officer
3 x 8 veteran Milita with level 2 officer
Level 3 Force Commander
58 men. 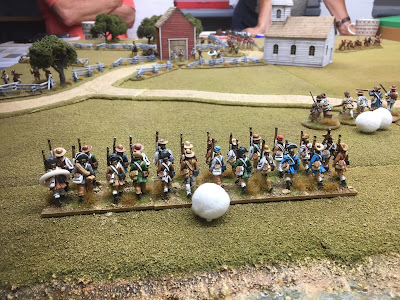 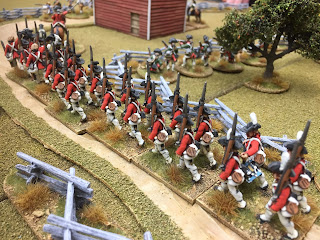 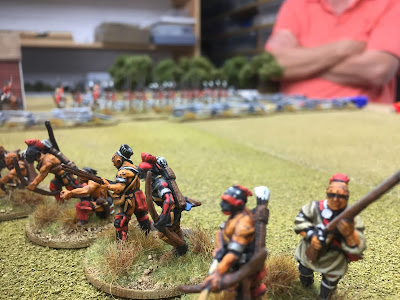 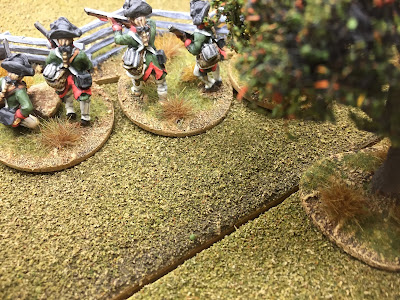 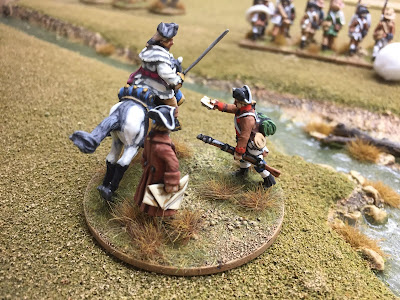 We all got moving fairly quickly with Chris Charlton getting one unit of Rifles in the woods flanking the church, our two Militia skirmisher units lined the fence at the edge of the village whilst the regulars and Jaegers pressed towards the buildings and the Dastardly rebels did the same, Chris Flowers took his sneaky Native unit left to push through the woods. 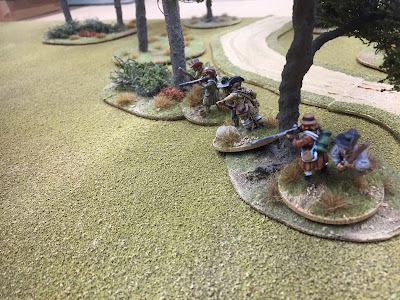 Three moves in and my British are nearly in postion lining the fence and protecting the barn, Chris F has got his Jaegers into the church and started to inflict casualties. His Indians are moving at a snails pace, perhaps too focused on being sneaky or just bad dice! My milita skirmishers are adding the odd casualty onto Chris's formations, meanwhile Chris has opened a huge 26 dice volley onto one unit of skirmishers at long range and inflicted just the one casualty, he is now pretty stuck at long range having to reload and fire rather than close. 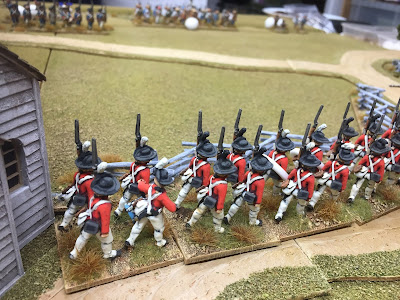 The Indians are finally in the woods as our skirmishers continue to trade fire, my British have turned to face and presented but unable to fire so far. a second volley from Chris is much more effecive inflicting 3 casualties on my regulars. The Jaegers snipe off one of Chris's rifles as do my skirmishers, losing one each in return. 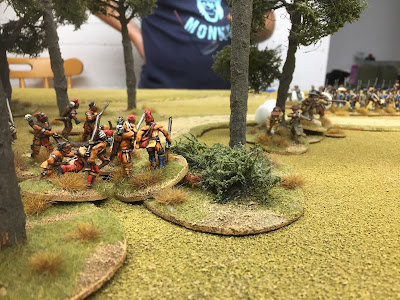 Chris's rifles focus on the Jaegers in the church with no effect given the good cover. 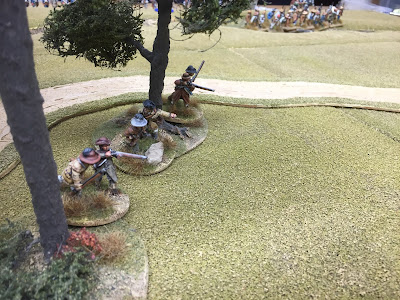 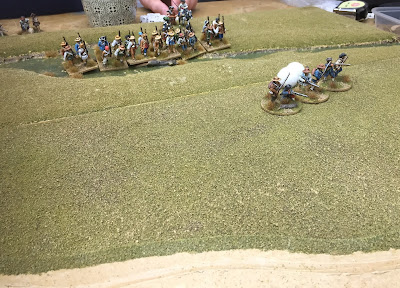 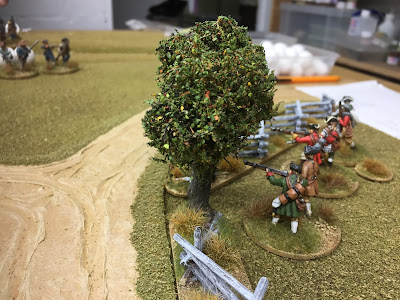 Chris C's skirmishers are blocking his continentals from firing but as they are so close the casualties on the rifles are being spread over the Continentals too. My first British volley is less than devastating despite controlled volley and first fire. 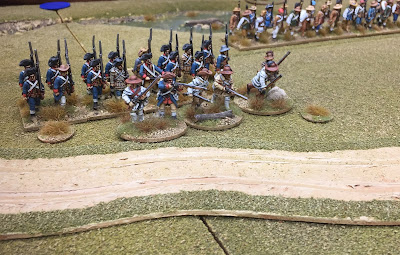 Finally the Natives are in range and charge into the flank of the rifles in the wood,  The rifles are quickley dispatched being both flanked and un-loaded. 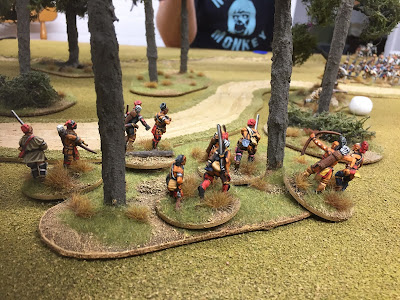 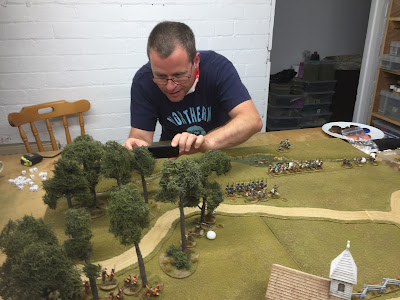 The Natives are now in a good postion to line the edge of the wood and cause some havoc amongst the continentals. Note the obligatory tray of biscuits in the background, out of the authors reach so they last longer. 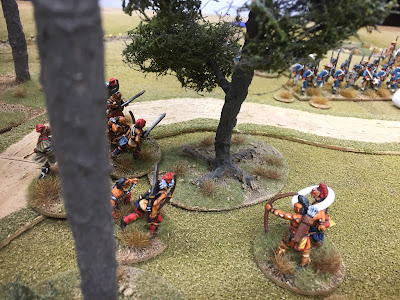 Chris C pulls his rifle unit behind the Continentals who pour a volley into the British, the return fire from the regulars and Jaegers however starts to punish the continentals. 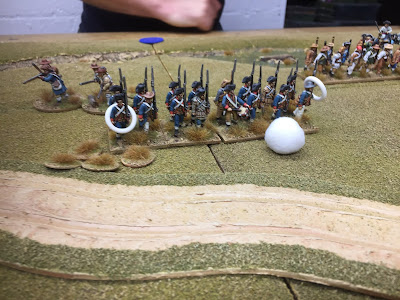 The Indians line the edge of the wood and begin to add their fire on the poor old continentals to. 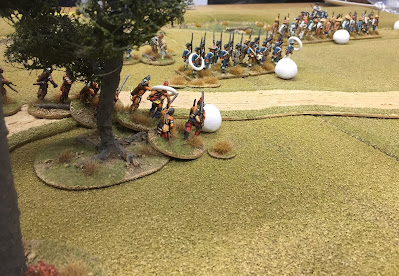 The British regulars are also taking a pounding and the Milita skirmishers next to them are gradually being whittled down too. 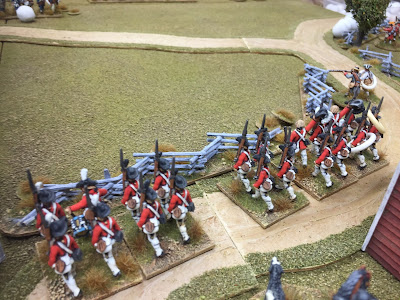 Chris F holds his Indians back for one more turn to have a volley from all 9 plus 10 Jaegers, 2 skirmishers and 17 British regulars. 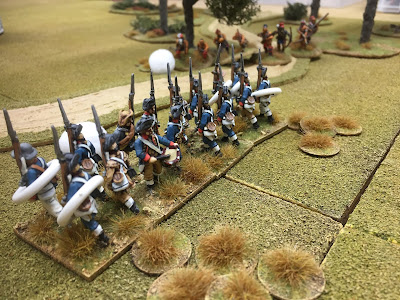 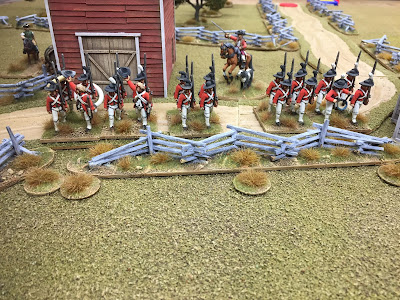 The effect is devastating the continentals start to fall back, a lucky shot also puts their commander out of action preventing any removal of shock. 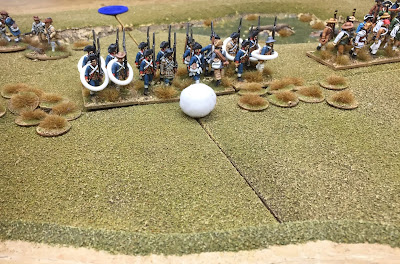 The British havent got it all their own way however, the Veteran Patriot militia are whittling away at both the regulars and skirmishers and an event card sees the barn with the munitions catch fire from the last volley of the regulars. 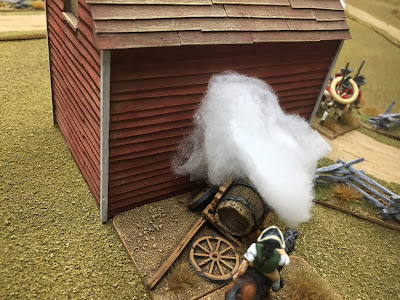 The Coninentals are pushed back fiurther and their formation broken. 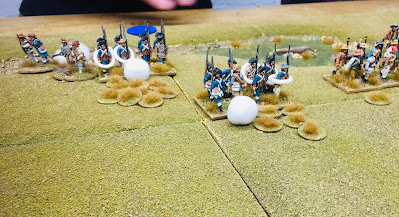 Chris Flowers decides to finish things with the tomahawk, the nearest unit is 9 inchees away so he uses a card to give himself 3 dice of movement which should be plenty, he rolls three 2's. Oh dear. 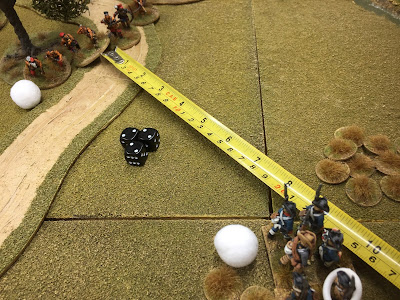 The British switch targets to the milita and start to inflict casualties, however a further event card sees them get excited and charge forward, perhaps just trying to escape the burning barn at their backs! 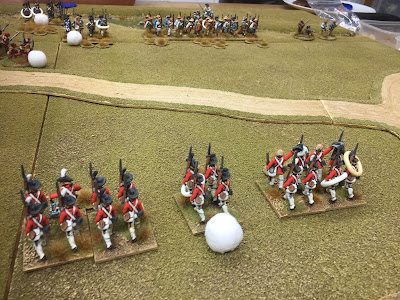 Chris/s Natives finally make contact with Chris C's continentals and wipe them out leaving the remaining Inidans on the flank of the militta. 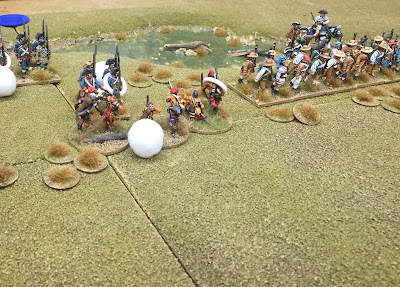 At this point we call it a night, the Continentals and one unit of rifles have been destroyed and the Veteran Militia are not in a great position. The British regulars are also taking a pounding and now in the open but the Patriots are not in a position to win. 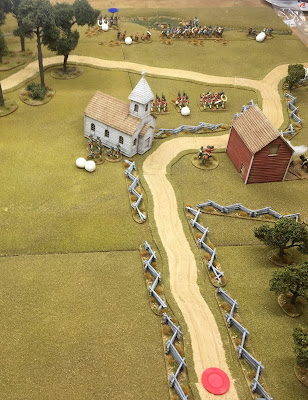 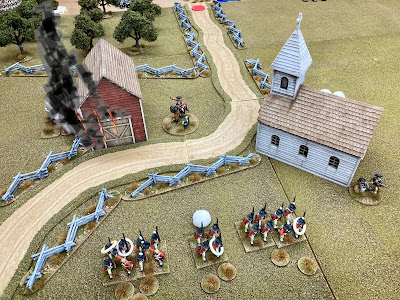 A thoroughly fun game and so pleased to be back, thanks Chris C for this last picture with the pyrotechniks added on to the barn. very evocotive.
I hope you enjoyed our little game I know I did. Until next time stay safe.
Posted by RogerC at 15:21