Steve asked me to put ona  quick one nighter for the El Cid collection and I thought it might be fun to have soemthing more to play for than just beating up your enemy. A lot of the Dark Age Iberian conflicts were large raids and so I thought why not build this into a game

So our table has three small villages and several hers of various livestock scattered about it.

Small garrisons defend the beasts from roving Moors and are in various undesclosed (but pretty obvious) locations, 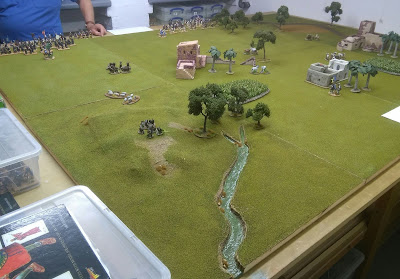 To achieve this they have 2 main forces:

This last force had been hidden at the edge of Wood to ambush any Christian forces pursuing the raiders and would be activated by the Umpire at the appropriate time. 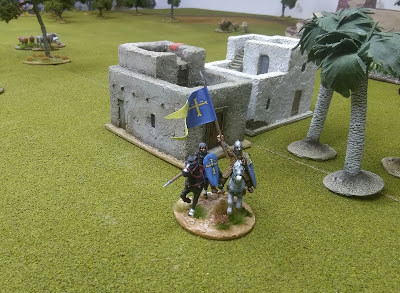 The Christians under Mark Stimpson had the following available:

4 divisions were off table moving to drive off the raiders and would arrive on random moves and on random locations on the Christian table edge.

The christians scored two points for each herd recaptured and each Moorish unit destroyed.

If the Christians could co-ordinate forces and get them on early they could overwhelm the Moors with both superior numbers and troops quuality, the Moors on the other hand needed to hit and run with their lighter faster moving focres making sure they scored a few oints then left before the Christians could return the favour.. 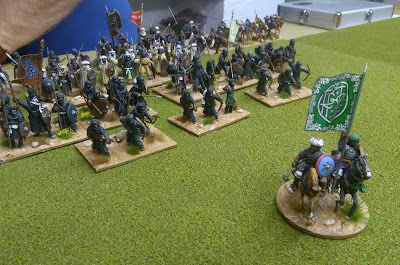 The Moors move first and things start well for them with their units belting forward three moves  and converging on the first cattle herds to start driving them off. 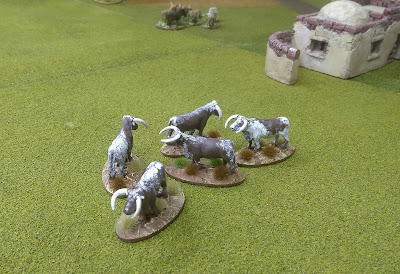 Chris finds himself immediatly in range of the first village and lets loose a well aimed volley, unfortunately its volley of ones! Little did we know but this was to be the shape of things to come later in the game. 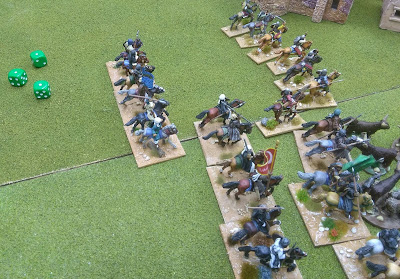 Next move and Msrk opens up with his archers from the front two villages causing a casualty each on Steve and Chris. The Moors shrug this off and bounce onto the second hers of beasts whilst firing volleys back at each of the units of archers. Unfortunately in both cases a six is roilled forcing a break test both of which are woefully failed by Mark and his two units down already. I begin to tink I may have got this badly wrong and the Moors would be off table with herds of beasts and burning villages in their wake before the Christians can respond.

However both of the units herding cattle roll their commands and fail to move at all. It seems that the cattle had a stubborn streak and did not want to be herded anywhere. Mark also rolls for his reinforcements and the first two units will arrive next move followed by the next two units the move after and they will arrive two divisions each on the same squares giving him overwhelming lovcal superiority once they get on.

Deciding to slow the Moors down whislt his reinforcements arrive he leaves the safety of the villages and blocks the path to the rest of his livestock whilst charging the nearest Moors with hsi light cavalry, whilst this doesnt go well and the light cavalry are destroyed it would turn out to be a pivotal point in the game. 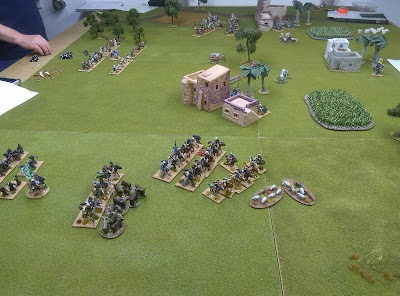 The Moors roll again to move the cattle and again they refuse to move at all, In both cases they skirt around the foot coming out of the villages to try and pounce on the next herds before the reinforcements can reach them. At this stage the Moors have 6 points having destroyed 3 Christian Units and can also get 4 more if only the cattle will shift, the Christians have no points at all but with the arrival of the first of the Knights thats all about to change.

Mark now also has too much to move and asks me to take over command of his left flank where a horde of armoured Knights are about to launch into the Moors. 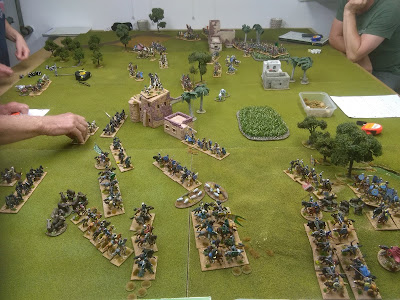 The first Knights advance along each flank and on the left Chris throws his first unit of Berbers at the first Knights to move forward, this does not go well with the Knights countercharging and sending the Berbers realing in dis-order. The Knights then charge the next unit of Berbers and destroy them following up wth a sweeping advance to destroy the already shaken unit behind. The Christian Light cavalry take on the third unit of Berbers and destroy them too, meanwhile the horse archers have taken over trying to herd the cattle which still absolutely refuse to move.

His foot have also stubbornly refused to move for two moves whilst on the other flank Steve has finally managed to get one herd of cattle moving and his foot who had bounded forward are now starting to pull back as the Christian reinforcements flood onto the table. 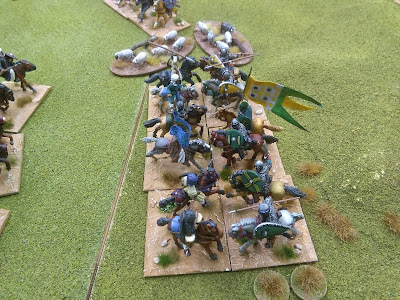 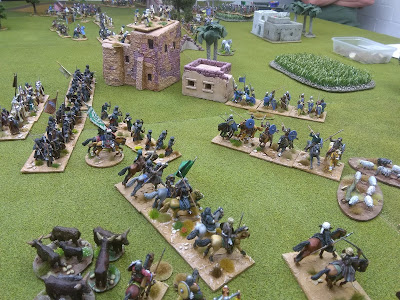 The rest of the Christians now enter the table with four more units of Knights riding on behind me and 4 units of armoured foot behind Mark.

The Mercenaries in reserve for the Moors are now released but dont really have anywhere to go in order to support the retreating Moors. 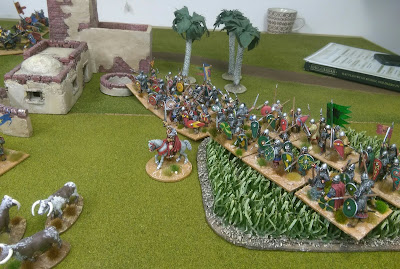 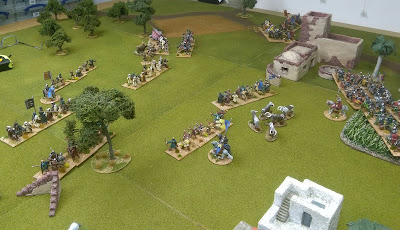 Steve launches a unit of Light cavalry at Marks advancing Knights checking them for one move before they are broken by the heavier armoured christians. 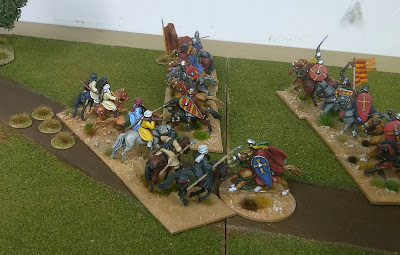 My knights now sweep around the re-captured cattle who have pretty much stood where they are much where they are munching grass all night and start to form up opposite Chris's infantry, his archers are forward of the line peppering my horsemen, a charge from the light cavalry drives these behind the sheilds of the Berber spearmen who are now in danger of being outflanked by superior numbers of Christian Knights. 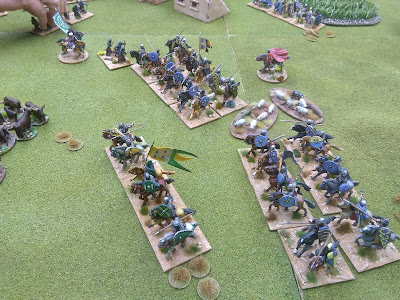 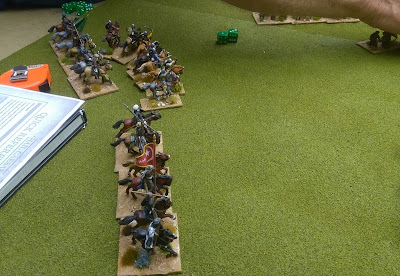 The scores now stand at Moors 10 Christians 14 points. We have plenty of time left to play but at this stage the Moors are in no position to score more and accept defeat, retreating with the just the one herd of cattle. 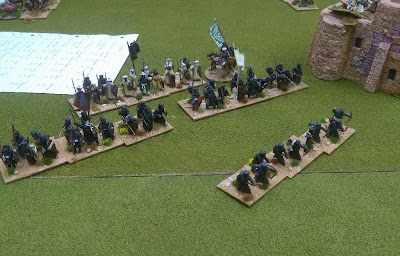 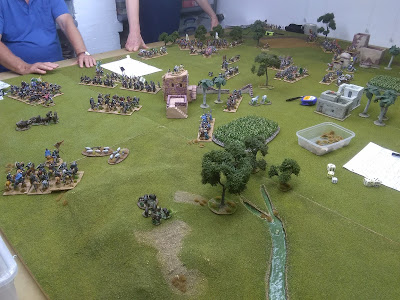 A fun quick one night game that played out entirely differently to how I expected. Early doors it looked like a milk run for the Moors but within 4 moves it turned on its ehad and the Moors were simply unable to extract themselves with their loot quickly enough.

Fun alround, thanks gents for cheering me up after a frustrating day in the real world.
Posted by RogerC at 16:02