Having been gifted a beautiful Irish Bronze Age Cheiftain by chum Chris Charlton and a long weekend in Arran, with loads of stone circles and ancient grave sites,I decided to have a go at painting him and thought "Why not paint up a few other Bronze Age figures as the same time?". I actually ended up dong more than I thought and really happy with most of these. 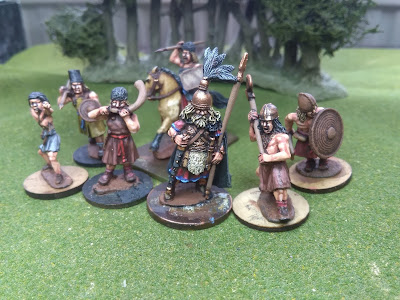 The Chieftain was a giveaway at Partizan, loads of detail and a lovely sculpt, I cant help thinking the long sword actually makes him early iron age but so what, too nice not to aint and use. The feathers in the helmet are straight up on the original sculpt just giving them a twist so its slightly off makes it look less 2D.

Really pleased with how this figure has come out. 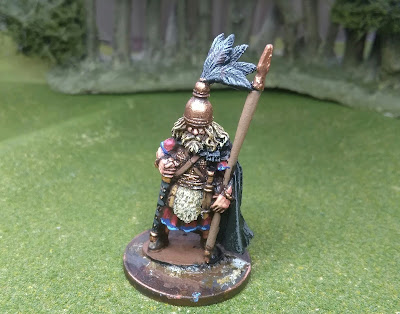 This cavalry figure is the last mounted figures, like most of the rest of these guys it is from the Foundry range, a tight fit on the horse, but again happy with how this has come out. 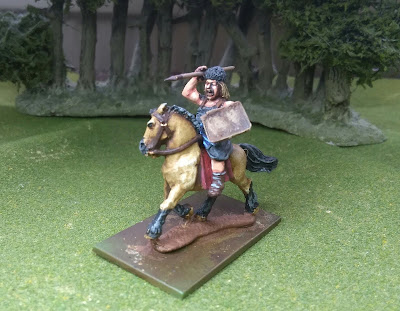 These two warriors are lovely, the first is as he comes, I chose to give him a bronze helmet rater than the leather ones most of the rest of the collection have. The second figure has a head swap and a leather helmet, I like how he is pearing over the rim of his shield. The Foundry range is reatively limited so I have done quite a lot of minor conversions to create some mix of figures. 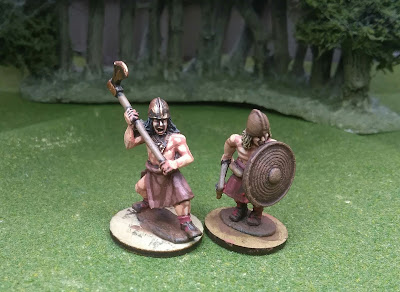 The horn blower just as he comes from Foundry, happy with this one. 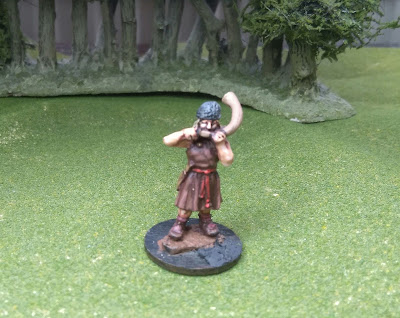 The skirmishers probably my least favourite, the slinger is a Warlord bronze age figure, now Foundry just have one figure so I have added a pack from Warlord, unfortunately most of the Warlord ones have beards so I have done a head swap, te head looks a little big but the body does look like a youbg boy which is what I wanted from the slingers. The Javelin figure is probably my least favourite of the range, the body is fine I just dont like the head, I have a couple more of these which look much better for a head swap. 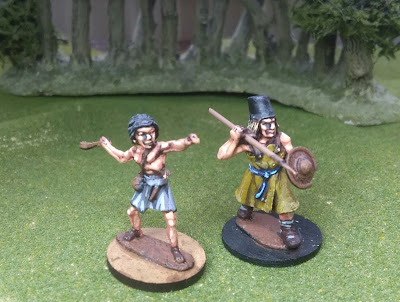 I have used amended Lion Rampant and amended SAGAto play with these but not quite happy with the games, also I still have 30 or so more figures and another chariot to paint and would like to get them all on table, although individually based I might give our go to ancients rules "Hail Caesar" a go with some appropriate amends. Lets see how that goes, I could always try something more old school with Pig Wars. One of my favourite ever collections a shame we so rarely play with them.

Arran is rich in pre-historic sites, much like Orkney. In a single one half mile stretch of moor we saw 7 "Stone circles" literally within yards of each, a blustery day added to the atmosphere.

The first ones a burial circle with a nice baord telling you whats goign on. 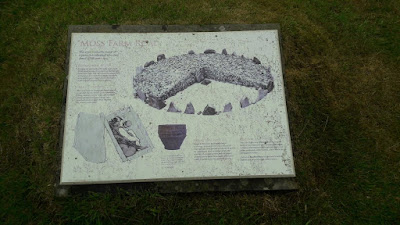 The second another chambered grave, these are the entrance stones. 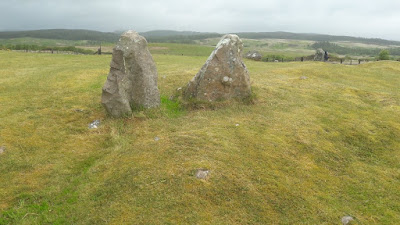 The third is a more traditional small stone crcle. 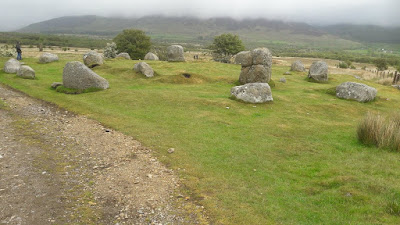 The ruined small holding perhaps of interest to anyone gamign the 45? Slap between two stone circles, an interesting place to live. 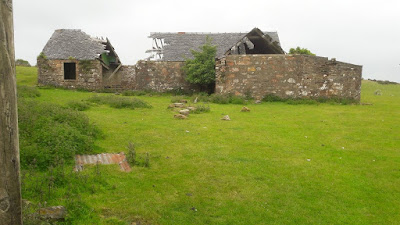 The next another small tradtional stone circle. 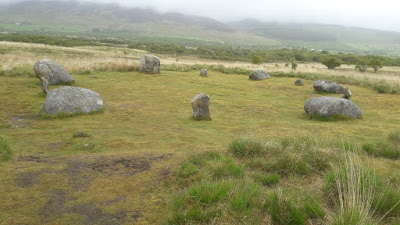 Another grave with stone pillars at the entrance 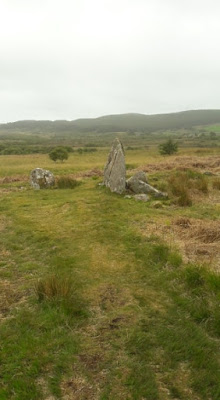 This stone circle is really impressive, you can just see a tourist moving away to the right giving some scale to these stones which are at least 12 feet high. These are exceptionally atmospheric on the bleak moor. 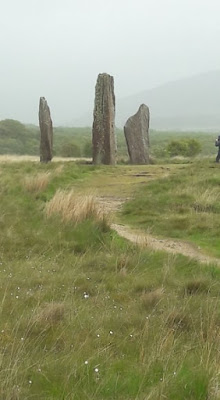 This single stone again 12 feet or so is by itself about 100 yds from the group of three, as we approached a pair of curlew landed next to it which was a special moment for me, never seen these birds before. 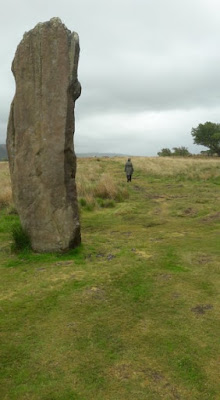 A quick drive up the coast brings us to Lochranza castle, the remains are a later version of the medieval keep and are 16th century, a beautiful little tower with grey seals basking in the bay. 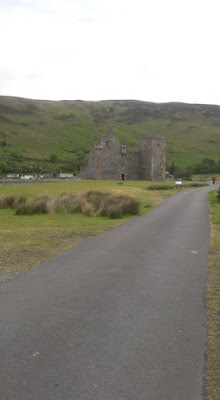 Brodick castle has a mock up of a bronze age round house which is interesting, again you can go in and it has all the utensils of  a bronze age house and oustside is a totem pole. 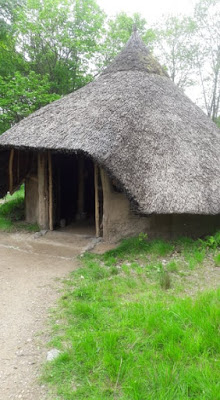 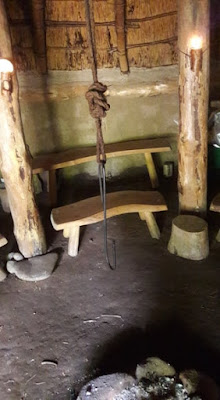 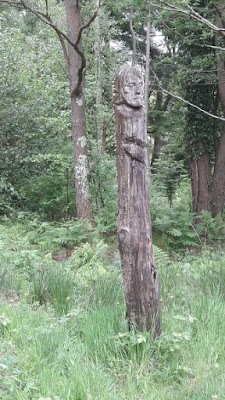 Lastly the giants graves down the coast is another very large chambered burial, fascinating and not far from an Iron age fort, well to me anyway! Arran is highly reomended. 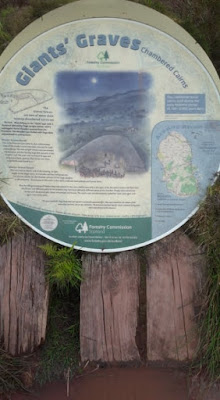 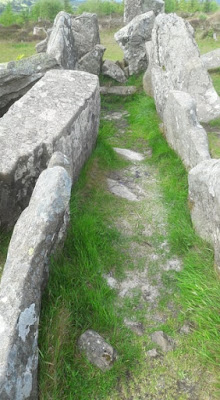 Just enough time to add three skirmishers to the painted forces winging their way to the basing department, apologies the lighting is not great, I will get some better shots when they are all based up. A Foundry javelinman with head swap, a casualty with a sore neck and a Warlord slinger, again with a head swap. 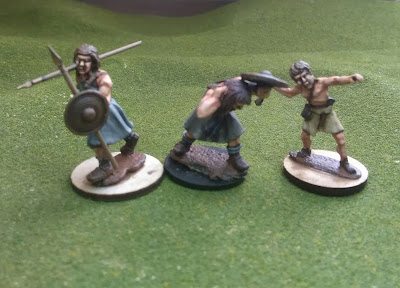 I hope you enjoyed our little trip into pre-history.