With another full day Hail Caesar game due, Chris Flowers asked me to organise the game. I decided a multi faction game where each player had their own objective might be a bit different, with this in mind I thought Post Roman Britain would be the ideal setting. It also meant that 4 of the players could bring their own forces and potentially play with their own figures.

Full disclosure at this point. It’s the third time I have written this report and so far I have managed to delete the whole thing twice by accident losing about a third of the photos in the process, fortunately chum Chris Charlton had half a dozen I have used to bolster what remains of my own. 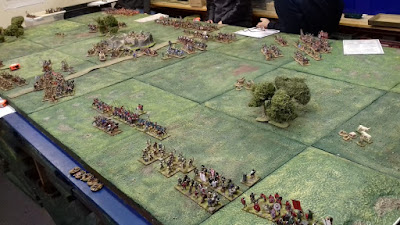 To set the scene then;

As Arthur grows old other forces in Brittania flex their muscles and the new King of Strathclyde decides it is high time he carved some more territory out for himself and stamps some authority on his neighbours. He therefore bullies, bribes and cajoles a Northern Confederacy of Kings with varying degrees of enthusiasm (or not) from beyond the Giants Wall to March on the ailing King Coel Hen and his Kingdom of Eboracum.

Coel Hen (Old King Cole) sends south for help then musters his army and marches without waiting for support.

Our Game finds Coel Hen and his bodyguard falling back from a defeat that has stripped him of the rest of his army. He is falling back to a ruined fort where his baggage was kept under guard during the battle in the hopes of denying this to the Northerners who are quick to follow his remaining troops. Meanwhile the Southern reinforcements are about to arrive on the scene and a fresh battle is in the offing.

The Northern Confederacy consists of:

The army of the Kingdom of Strathclyde under its King Domnal and his Warlord Erbin Long Spear (played by Steve Shann), Strathclyde has engineered this small war and so has the most to gain, a victory will secure their standing, especially if Arthur himself can be drawn north and defeated. The Picts want nothing more than loot so Domnal is keen to get to the baggage and cattle herds first so it is his to share out with his Allies rather than theirs to steal. 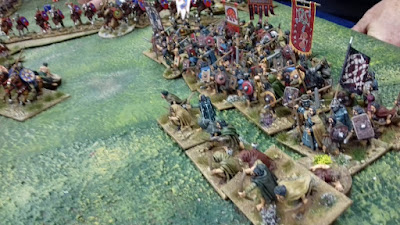 The Southern Picts led by King Drest Erthinmoc, (Rich Croisdale) this is the lightest army on table but very flexible. 5 units of light foot under the Champion Necton fat neck each have an extra short range missile dice but reduced close combat dice, they also have the long spear rule which removes their opponents charge factor. Two units of archers support the foot whilst Drest leads a unit of medium horse and 3 light horse. All of the Picts have the marauder special rule allowing them to move outside command of the King with no penalty, their main aim in this campaign is to garner as much loot as possible without taking casualties. Drest is particularly happy if his erstwhile allies are weakened through battle casualties so he is unlikely to help the other Northern Kings too much if he can help it.

The Kingdom of Gododdin led by King Manaw Lech is a most unenthusiastic force (also Rich C). Allies of Arthur they are surrounded by the other Northern Kingdoms and have no real choice but to join the great raid. Manaw Lech leads 4 units of medium infantry supported by 2 archers whilst his sub commander Cunedda Bright Helm has 3 medium cavalry under orders. Manaw Lech must steer a careful course in the battle, he has no wish for Arthur to be defeated, but cannot be seen to be hanging back too far. 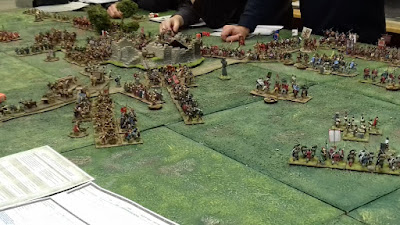 The Bernician Angles of Bebbamburgh, (Andy Lawson with his own figures) I was tempted to call their King Uhtred but instead opted for the more historical King Oesa with his henchman Octa Blood Axe. 4 heavy infantry, 4 medium infantry 1 medium and 2 light infantry with no archer support. The Angles have the most to gain from the defeat of Eboracum so will fight hard to expand their lands, their northern neighbour Gododdin are no friends so they would be happy should they meet with a reverse in the battle to come. Their Heavy infantry get the wild fighters bonus, a re-roll of one failed dice in the first round of melee.

From South of the wall:

The remnants of Coel Hens army of Eboracum consist of three body guard medium cavalry units under his champion , two units of Limitaini medium infantry of dubious quality. 2 scorpions and a unit of archers in the fort and a further unit of archers retreating towards the fort. Coel Hen is primarily concerned with escaping and getting his baggage away with him. If his bodyguard and Allies have to be sacrificed to achieve that, so be it. 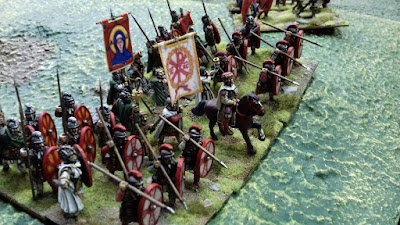 The Kingdom of Leodis under their King Gwallog are again less than enthusiastic, (Chris Flowers enjoyed this role) whilst Coel Hen is a better neighbour than the Northerners would make there is no love lost between the Kings. Gwallog is particularly concerned about the Saxons who have been eyeing his Eastern farm land with envy for some time. He is here to fulfil his oath but won’t be losing too many men in the process. Gwallog has 6 units of medium foot supported by 2 units of archers and his battle leader Urien Death Giver leads 4 units of medium cavalry in the old Roman style. 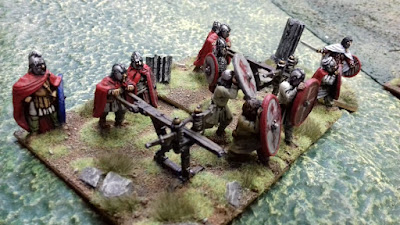 The Saxon Feodorati of Lindsay on the East Coast (Me) under their King Erlich the fair (Type cast?)have been allies to the Romans and their successors for generations and he welcomes the opportunity to wet the blades of his young men. His force is all foot with 4 units of heavy and 8 of medium foot supported by a unit of archers and his champion and Warlord Wiglaf Raven Feeder. It would however be nice to see the weakling from Elmet weakened further, some of his border farmland is ripe for taking next year

And the forces of Arthur Ap Uther Dux Brittanica (Chris Charlton), 3 units of medium horse, 4 units of medium foot, one of archers, a pair of Scorpions and his famed knights in the shape of a unit of Cataphracts.

Cataphracts? Yes I know, it is meant to be fun though! 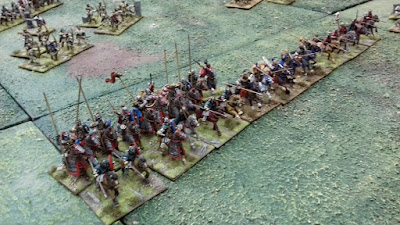 The Northerners diced to see where they would come on. Arthur had the advantage of deciding where is forces arrived, but the disadvantage of not knowing where the enemy would come from.
The remnants of the army of Eboracum and deployed milling around the ruined fort whilst the Saxons are deployed 12 inches on table marching straight up the middle on the old Roman Road (That’s the A1 to you and me). 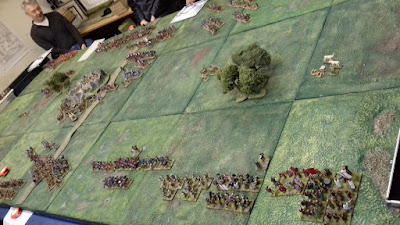 The Picts are deployed 12 inches in table on the left of the Northern battle line, the Bernician Angles have the centre and the army of Strathclyde their right, the men of Gododdin being less enthusiastic will arrive behind the Angles in the centre. 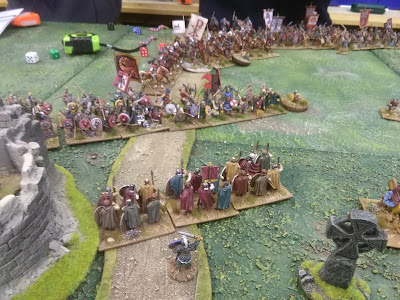 So the scene was set for an epic battle with lots of dirty dealing and people supporting their allies or not as the battle raged. Well that was the plan.

Move one and the Picts are going forward quickly to grab as much cattle as they can, the Angles also punch straight up the old Roman Road, the men of Strathclyde just about manage to move on and those of Gododdin are still thinking about it.

Coel Hens body guard horse immediately turn about and advance on their Northern enemies to buy some time for the baggage to be gathered. The Elmetians have a chat about what to do whilst Arthur’s cavalry plough forward on the right of the line. My Saxons roll a blunder, typical, on the upside the result is advance which was my plan anyway, Phew!

Next go and both sides creep further forward as Coel Hens cavalry charge into the advancing Angles pushing them back but tasking casualties themselves.

As we get further into the game the result of having forces arrive at random points of the table makes itself clear. The Picts are the lightest troops on table but face Arthur with the heaviest, the light cavalry throw themselves at the Knights to try slow the advance with the inevitable result of being cut to bits.

In the centre after being pushed back by the horse the Angles are pushing forward to take the forts supported by the men of Gododdin whilst on the other side Strathclyde fail to get moving and Elmet sat back and watch proceedings. If I had swapped the Strathclyde and Pictish forces the battle on Arthurs wing would be epic and on the other side the Pictish light infantry could filter through the woods flanking the Elmetian army and force them to act. Ah well maybe next time.

My Saxons finally get moving and I leave a gap between my forces and the forces of Elmet, on purpose, I want to encourage Steve to launch his Strathclyde cavalry at Chris’s Elmetians. I know sneaky! 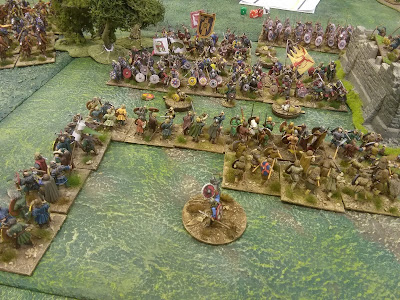 Initially this works and Chris’s cavalry of Elmet are forced to retire after a brisk engagement, unfortunately for me Staves Strathclyde cavalry then turn on me just as both Andy and Rich close in with the Angles and Gododdin men. Oh dear.

I am able to see Andy’s Angles off but both Staves Cavalry and Richards’s foot have more success and I lose a whole division of Saxons, four units gone in a move. 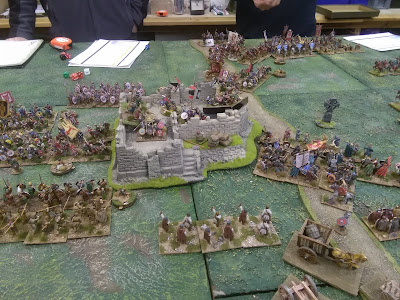 The Angles have now pushed the archers out of the fort and put the scorpion crews to the sword, the Eboracum cavalry have been destroyed and the Northerners are lapping around the outside of the fort. But Arthur’s cavalry have arrived, brushed off the light Pictish cavalry and begun to close on the flank of the Northern infantry. Coel Hen has finally got his baggage train in order and is leaving at the head of it whilst his remaining troops are cut down. No wonder he got to be so old. 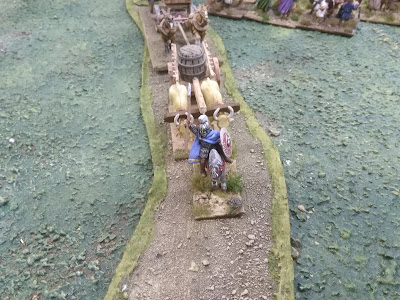 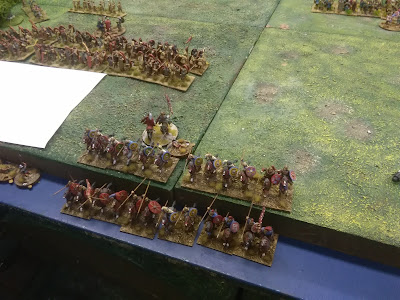 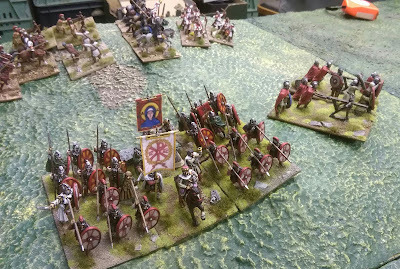 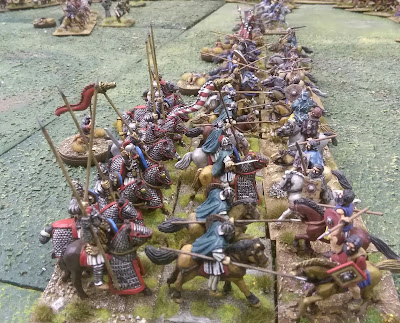 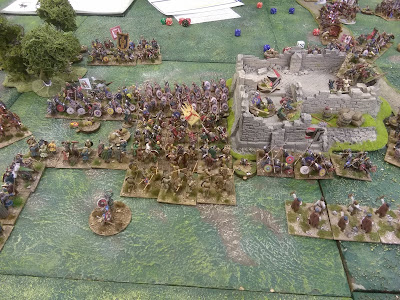 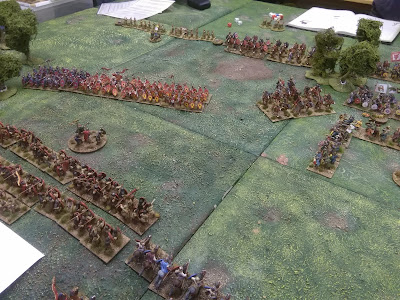 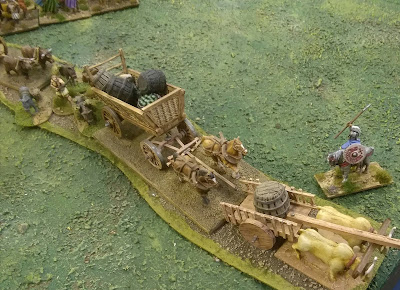 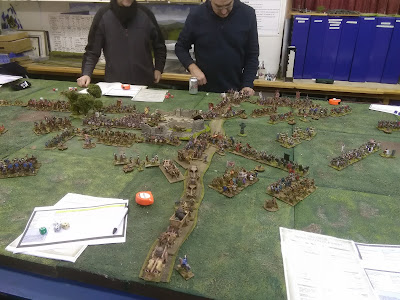 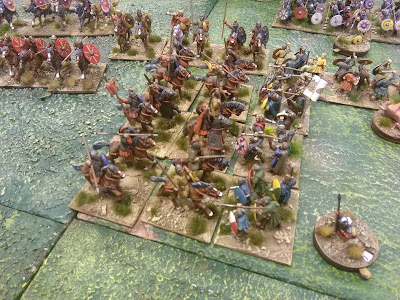 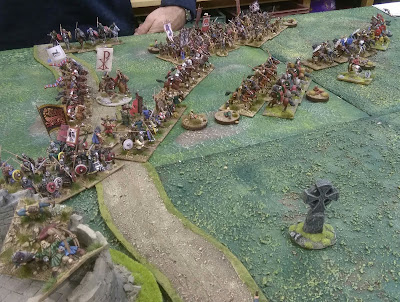 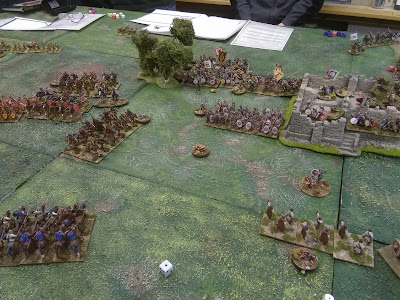 Steve’s Strathclyders finally get moving forward and Chris decides now is the time for Elmet to strike a blow and charges in sending the Strathclyde foot reeling back. The Saxons are now entirely surrounded by the Strathclyde Cavalry and the infantry of Gododdin and the Angles, Arthur has closed with the Pictish foot but is making heavy weather with their long spear ability countering his charges. 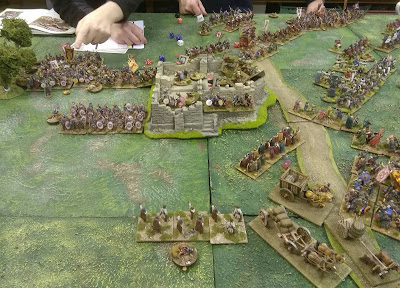 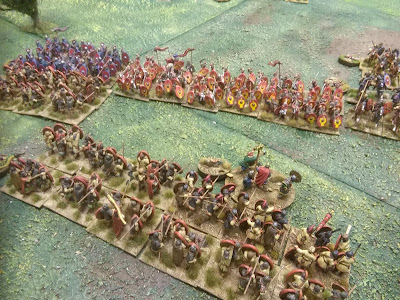 As Coel Hen leaves the table with his baggage we bring the game to a close, the Southern forces are unable to break the Northerners or force them to withdraw, the Northerners have been unable to capture the baggage but have snaffled plenty of cattle, the bloodied forces will now withdraw to lick their wounds and plan their next moves.

A draw! We voted and found that Chris Flowers dilly dallying on the edge of the table had played the nearest to his character and was declared a perfidious winner. Those with their own troops had them bloodied in battle and everyone got a full game.

Next time I will definitely make sure I control the entry points better to get a more balanced game.
The next game looks like being an El Cid with Jerry having expanded his forces significantly the table will be full of colourful troops. Can’t wait.