The long neglected Sikh Wars project had some long awaited attention this week. I decided to crack on with some of the old foundry afghans I have. Although the afghans did take part in the second Sikh war I am thinking of these more as Muslim hill tribes. The sort of irregular troops fighting for the Sikhs who lived in Kashmir and Jammu (although Gulab Singh and Imam Ud Din their rajah's sensibly kept most of these at home with his eye on keeping power when the British and Company troops eventually won, a shrewd move as it turned out for Gulab who became an independant Prince but not Ud Din). The North West Frontier was at this time in between the Punjab and Afghanistan so it was with the Sikhs that the Pathans of this region fought and allied themselves before it became the North West Frontier province of British India.

Apologies for some of the photos I have been messing about with what works best after my large lamp snapped. Still using it on some of these but having to balance it in one hand whilst taking pictures on my tablet with the other! In the later pictures you might notice the green matt is a bit crinckled as my lamp got too close when I wasnt concentrating and slightly melted it!

I have decided with this one to photograph them in the batches I paint them in. A quick technique for painting I use is to use batches with limited colour palets, two main colours usually across 3 -6 figures, eventually I end up with 5 or 6 batches I can then mix together for a very irregular look. This first picture actually represents two batches with blue/grey and beige predominating one and red with a brown/grey that I use foor Russian greatcoats the other batch. 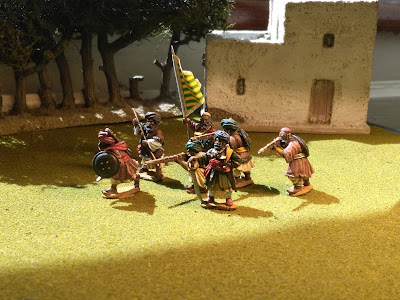 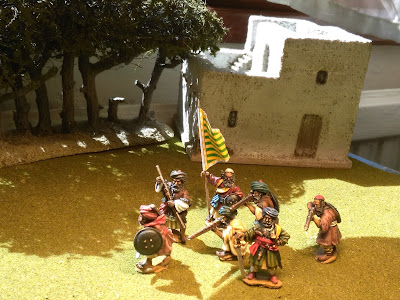 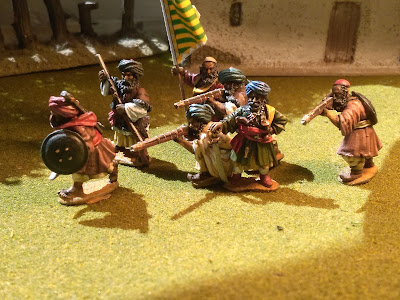 n
I am posting these as I paint them in batches, you will see that each lot has a similar colour palet to make it easier, they will all then be mixed up on the bases once I have enough for a regiment. The red brown with this lot was quite nice. I cant help feeling that the officer is very Sikh looking in Greens and yellows.  I may use him with a Sikh unit and paint another of the same figure in more muted tones for the Muslim troops. I think that the Muslims avoided green generally as except as a holy colour on flags. He does look snazzy though! 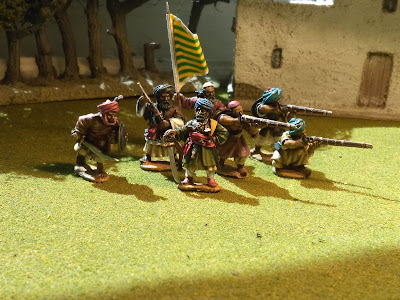 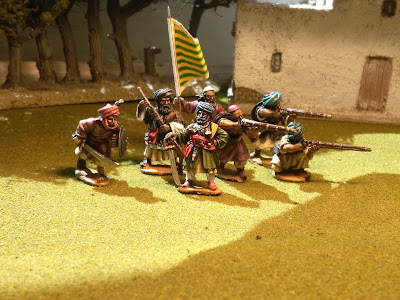 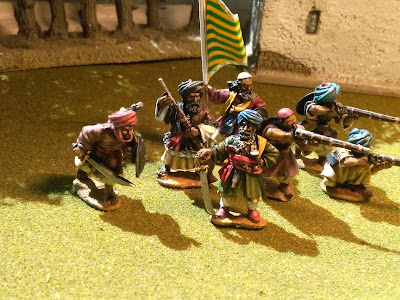 This next lot had mainly grey/blue or ivory as the main colour schemes. The blue/grey is one of my favourite paints from colour party (sold as field blue) 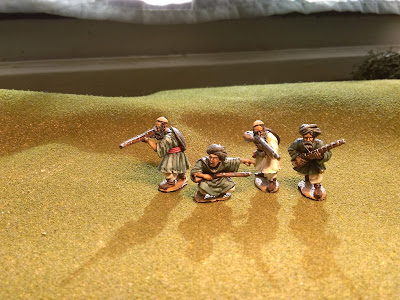 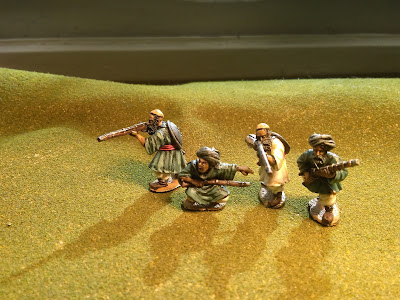 More white and buff with the next lot. Nothing too exciting. 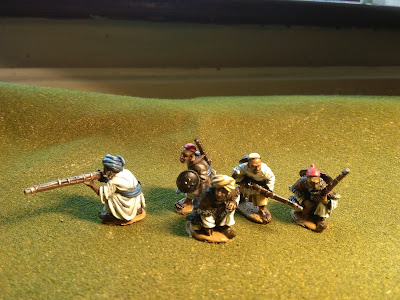 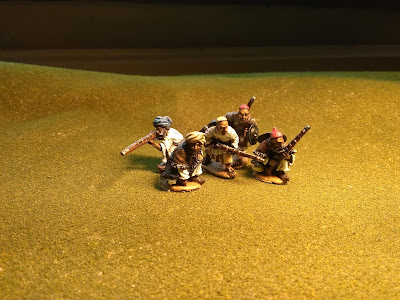 For my company native cavalry I will mainly be using the lovely Iron Duke figures (although I may also have some of the Studio miniatures Bengal Light Cavalry in shakoe's for Governor Generals body guard) These are easy to paint figures and do come out very nice indeed. The horses are particularly nice and different to the usual ones other manufacturers seem to use. Officer and Sowar to start with. 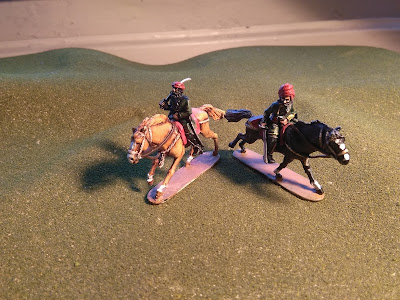 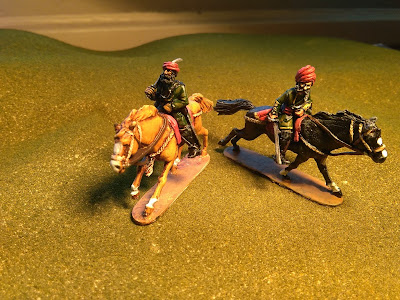 My army will need a lot of irregular cavalry, here's three more to add to the Sikh forces. I have a mix of Foundry Afghans again with Foundry Sikhs and Perry Afghans, I am mixing the different makes riders and horses to add a bit more variety. 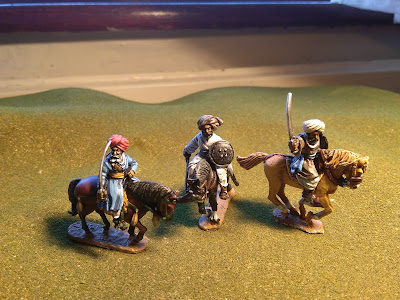 I am using a daylight bulb for lighting the next few, funny how entirely different the grass colour is! I think I prefer this lighting so will try it again. Three more Iron Duke Bengal Irregular cavalry. Lovely figures more on the work bench, dispelling the myth that "red and green should never be seen". These are the 12th Bengal Irregular Cavalry. I had thought to do some of them with lances but bought the figures before Mike released the open handed ones. 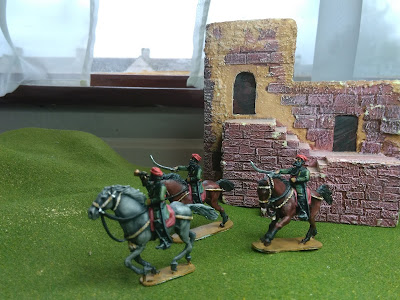 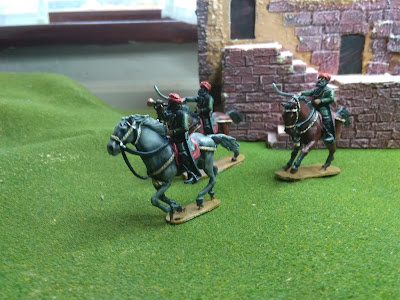 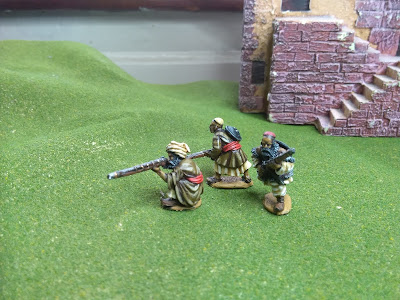 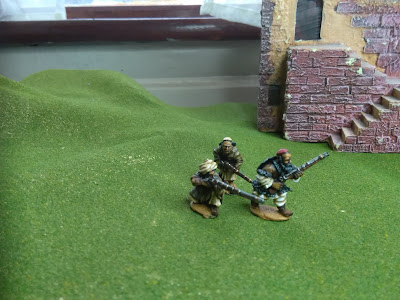 I know I said white but this lot ended up with sky blue and washed out madder red. White next I think. Again I do like the contrast of the red and beige it works really well. The sky blue adds a splash of brightness too. The musketeer might get mixed in with my Sikh troops rather than my hill tribes, slightly short on the Sikh irregulars and pinching a couple of spare Afghans who look slightly Sikh in appearance might help me out a bit. 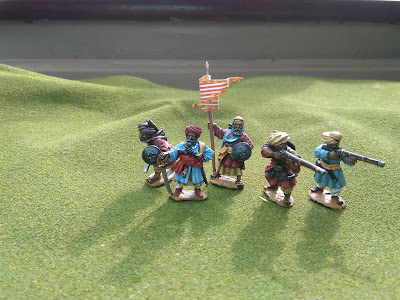 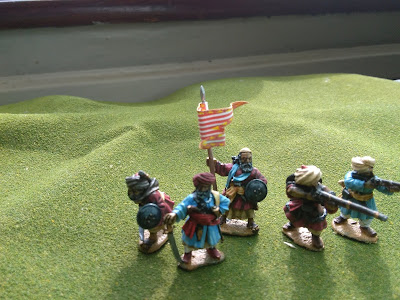 Another Bengal Irregular, rooky error here, I have varnished this but not finished it I have undercoated white for the socks and nose of the horse in light grey but not put a white highlight on, Doh! Never mind resolved the issue after loading the picture. 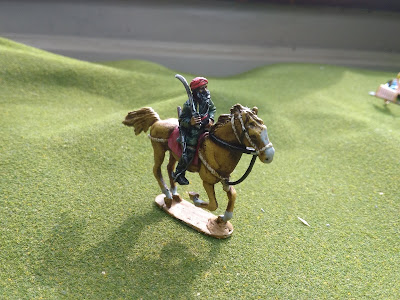 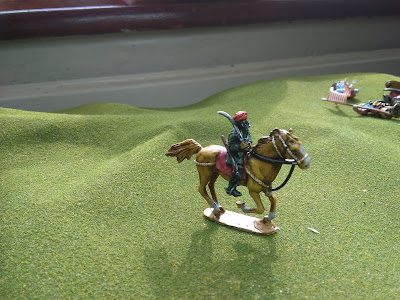 And there they are, a few more Hill Tribes in mainly white or off white. The mix of the two is nicer than just white in isolation I find. 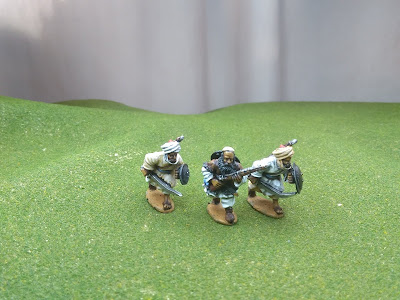 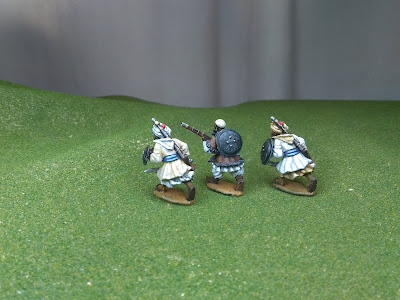 To be honest I have had to give up the painting after gettig these over the line for a few days, my gut is giving me some gip after doing far too much painting over the last couple of weeks. The basing department is home for the weekend so I will put the brushes aside, glue these lot to bases and she can crack on with them whilst I take the El Cid collection to Newark in the morning for the Partizan show. 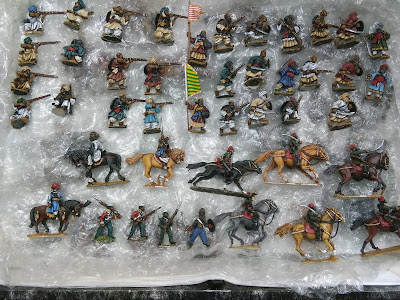 And here is whats done so far that needs basing, not all over the last week or two of course but much of it has been. You see my OCD kicking in lining the same castings together for when I come to do the basing and match them up. Hopefully see these based in the next week or so.

Thanks for reading and if your at Partizan feel free to pop over and say hello..
Posted by RogerC at 16:24