We have toyed with Sharp Practice before and both Steve and I have thought about using it for different projects so we decided to have a small game at his place this evening, just the two of us. Steve is interested in using these for AWI and I like the idea of them for the Retreat from Moscow.

The units we put on I think turned it into a reasonably big game as it goes. Possibly slightly too big for a play test. 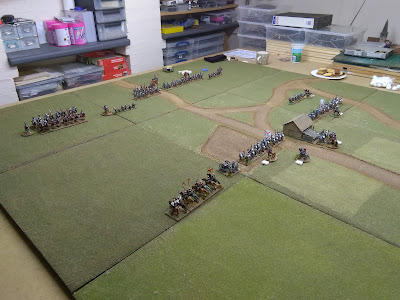 Essentially we had the French Foreign Legion vs a Carlist contingent. Nothing two clever just line them up and walk through the game mechanisms.

The Carlists had just one unit of eight horse but their gun was larger. 2 units of six skirmishers with Sergeants and 2 Captains, one with 3 units of eight the other with 4 units of 8. An overall commander completed the force which was also 80 figures. 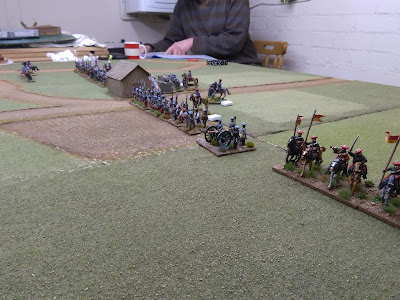 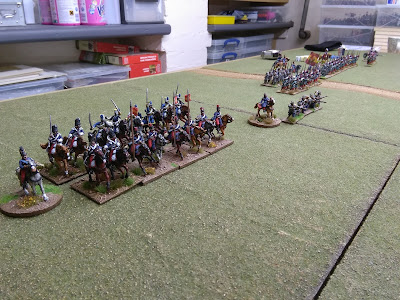 Slightly gun and horse heavy for Carlist War really but we wanted to see what they could do.

My Carlist colection is based in fours for foot and pairs for horse and skirmish so lends itself to Sharp Practice quite well. Although my horse are in squadrons if 6 so we had to pinch a final base from other units and the lack of seperate sergeants left mounted officers commanding skirmish screens, but if you forgive these little things it doesnt look half bad. 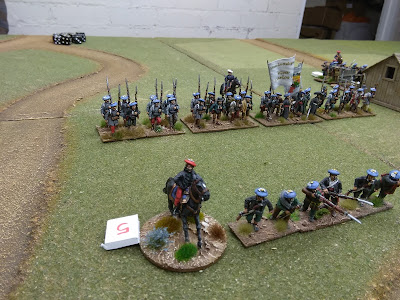 First thing we found was that with so many units on table we had to find a way of remembering which was which, so we stuck numbers next to some of them. We took our time and went through every little thing with the rules rather than assuming we knew the answer (even though we often did) we made sure we double checked everything and most things worked really well. The cavalry proved the thorny bit but more of that later. 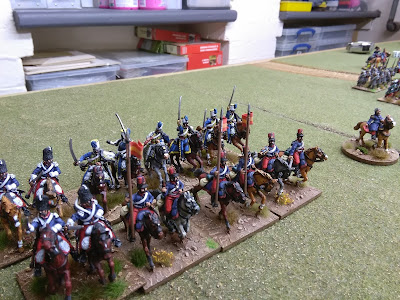 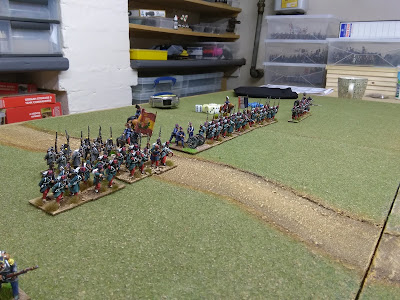 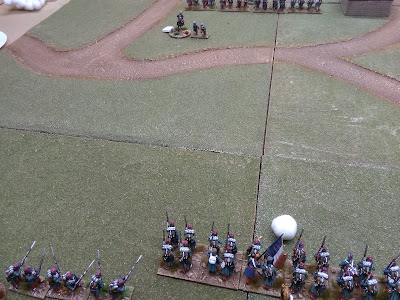 In the opening moves the Legion got itself forward with one company of 3 platoons taking a bit of fire and the other inflicting heavy losses on the Carlist skirmishers.  Having 24 firing dice plus another 2 for your commander and taking a plus one for aiming really made a difference.

Of course good dice helps too! 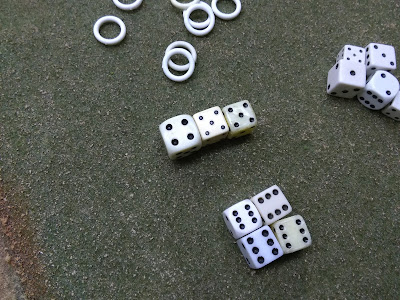 In return Steve wheeled his 4 platoon formation and now had 7 platoons a gun and his skirmishers lined up to punish the lead formation of 3 platoons of Legionaires. Oh dear. This unit very quickly started to mount both shock markers and casualties. 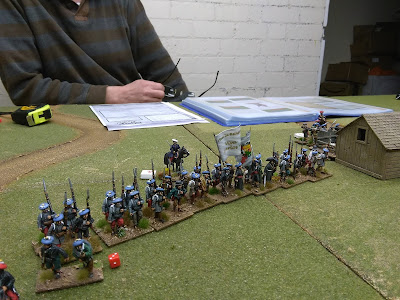 We decided there was no advantage in the cavalry being one troop behind the other and started manouvreing the rear one. This led to a bit of a loss of control and as it turned out was entirely wrong, the second troop could have supported and added dice to the melee that ensued when the lead unit of Legion Lancers charged the Carlists who were caught at the walk. 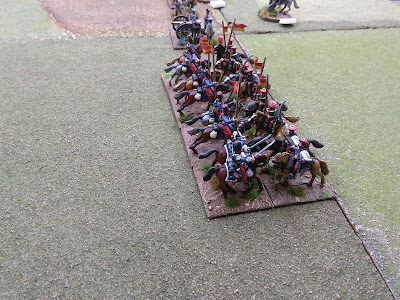 The melee went my way but left the commander stranded between 2 troops of horse. 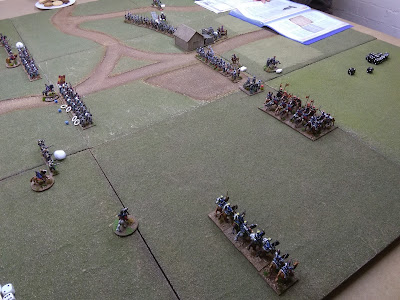 Steves cards came out in quick succession and the casualties and shock ramped up very quickly. This formation being very shakey by the end of the second round of cards. 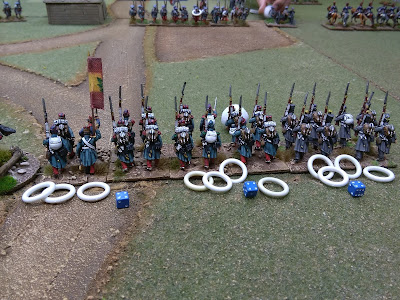 The remaining Carlist lancers charged the Legion and the ensueing second melee saw two rounds of fisticuffs and the Carlists almost wiped out. The Legion lancers were now on the flank of the Carlists but no where near their commander and with 3 casualties and some some shock markers.

By this time we had used up our available time. Steve's first skirmish screen was leaving the table and his lancers almost destroyed but the rest of his force was looking pretty healthy.

My first Legion formation was in a bad way and the Legion lancers were not too happy but again all the rest were ready to fight on. A long way to go but it was all about getting a hang of the mechanics and we managed that quite well.

Questions we had were mainly around the cavalry. If they start in the middle of the table does that mean they are stationary and can only move to a walk? When you beat cavalry and they withdraw do you follow up or stay where you are? If you stay where you are does that mean you are stationary and have to build your speed and momentum back up again?

Apart from that all else seemed to work quite well. 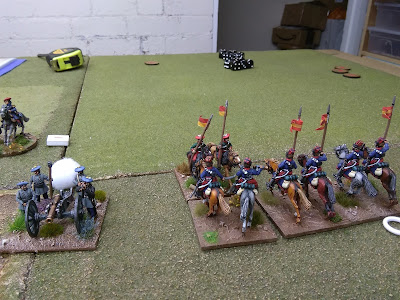 As usual tea and biscuits were provided by Steve and Julie, great hosts as they are. This picture was the end of the night. We seem to have a lot of biscuits left, is it coincidence that Mark wasnt there? 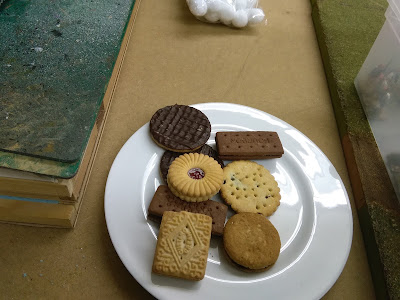 Taken as a whole enjoyable rules, No surprise we play a lot of Lardies rules and usually get on with them. Just need to play a few more to see if they will work as we want, perhaps a little small for the level Steve wants for AWI, not sure you could do the whole of Cowpens for instance. However if I ma to use these for the smaller games in 1812 and Black Powder once I have more figures I think a good 2 - 3 player game is to be had.

I am away for a week now with the finance department in Barcelona. I will see you all in a week or two.