After not playing with Chris Charlton over at the club for a while we decided a game was in order. Chris invited Mark and Chris Flowers over too. We decided to try Black Powder for his Italian's colonial army against the Abysinians.

This is a lovely and unusual collection which I painted for Chris some time ago. Many of the figures were commissioned by Chris specifically for the conflict.

The premise is that after the disaster at Adowa where the Italian army was destroyed by the Abysinians a scratch force is pulled together to try and capture the Holy City of Gondar. Before they can ford the river to advance they are caught in camp by a small Abysinian army. 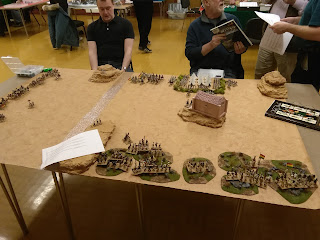 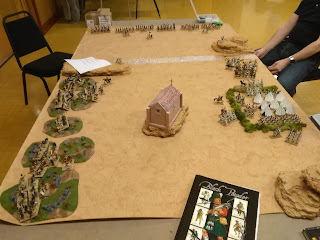 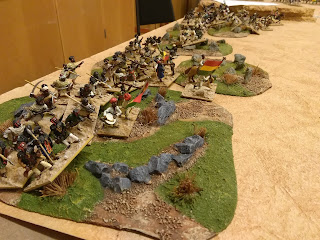 I dont have the exact make up forces but it was roughly as follows with both sides having 4 brigades split evenly between 2 players per side.

Next 2 Brigades led by Chris Flowers

The irregulars were very poor and the Italian foot were not great, the Bersaglieri were very good and the natives above average. 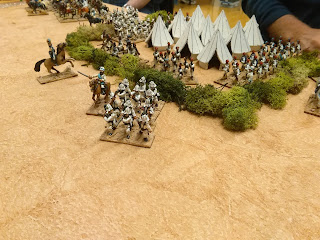 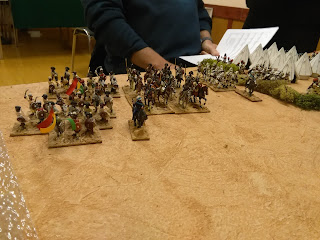 To face this modern force the Abysinian's also had two lots of two brigades.

My forces facing Mark were.

The Abysinisan troops all had large units so a plus one dice in combat and all had ferocious charge giving them re-rolls for melee where they charged into contact.

Very much firepower vs Ferocity. The Abysinians then had 12 units and the Italians the same. The quality of the Italians was not great but their firepower should make up for that. 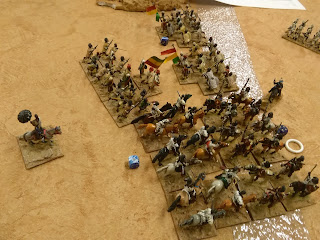 The game started with the Italians trying to get forward to a position when they could use the mountain with the Church to protect their flank. Whilst the Abysinian Warbands threw themselves forward as quickly as possible hoping to find a weakness or gap to exploit before the Italians were fully in position. I was facing Mark who had the weaker two brigades and we hoped that Chris c could pin Chris F and his better troops and machine guns whilst I tried to knock Marks weaker troops out and exploit the gaps. 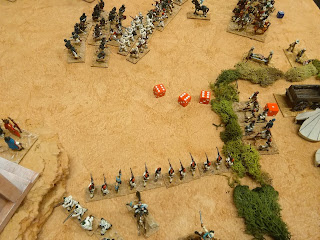 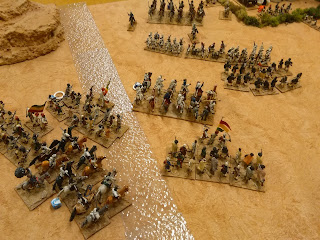 I pressed forward with the majority of my force, although some failed their orders to advance, we got to grips with Marks wavering irregulars and very quickly started to get the upper hand. 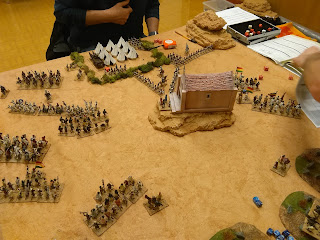 Things did not proceed quite so well on the other flank where the gap to advance was smaller and Chris F's native troops caused severe damage to Chris C's warbands. 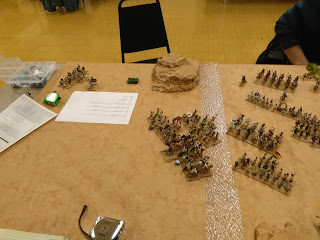 On my flank I was able to destroy the first two units of irregulars and force the cavalry to retire, however as most of my front units were either disordered or shaken by the fighting I had to stop for some time to re-organise. This gave Mark some vital time to organise his Italian conscripts and guns whilst inflicting more casualties on my front units. 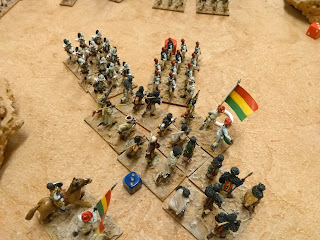 On the other side Chris F charged the Warbands to his front after hitting them with heavy fire. A risky tactic which paid off handsomely driving back Chris C's troops (those he didnt destroy in the process that is) 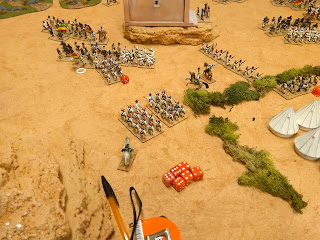 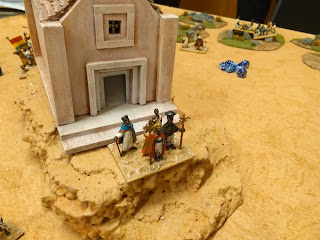 With one flank pretty much secure Chris F was able to filter troops over to support Marks flank. My now reformed troops charged the conscripts and guns and destroyed them, again though taking significant casualties in the process. Chris C had protected my flank from the fire of Mr Flowers troops during this action. At the end of this phase the few remaining battered troops of both Mark and Chris Charlton failed brigade Morale tests, leaving Chris F and I to finish the game. 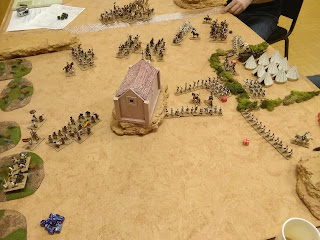 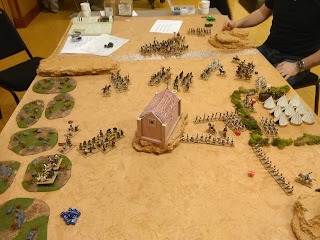 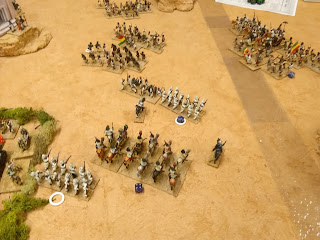 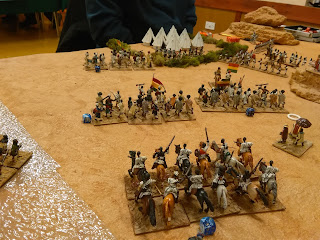 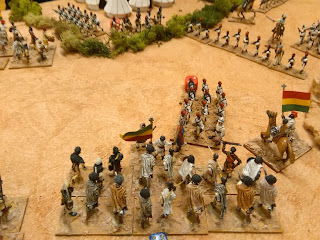 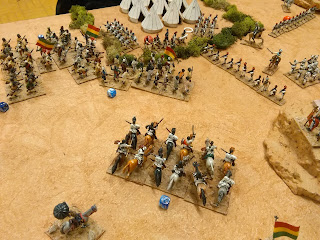 My troops were now in position to storm the camp from the flank, however Chris's native troops poured a devastating fire into the charge. The machine guns in particular mowing my troops down. I was unable to make any traction into the camp and the rest of my forces were being badly mauled. 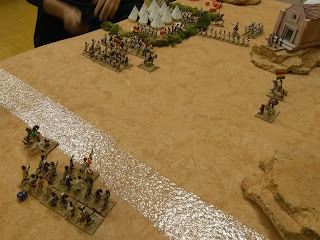 By the end of the final turn I had just one brigade of damaged tribesmen whilst Chris had both brigades and machine guns virtually intact. I was clearly not going to make any progress so conceded the game at this point and withdrew with my remaining troops. 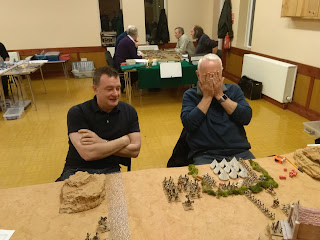 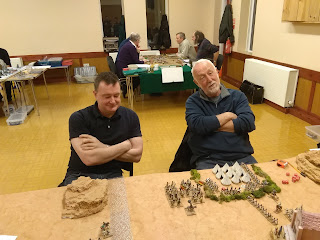 This was a really fun and quite different game both in appearance and how it played to many colonial conflicts. Black Powder worked really well and in just over 2 hours we got a definitive result.

Thank you gentlemen for a very entertaining game. I look forward to our next one.