Review of the Christian forces for El Cid Project

So I recently finished another unit of light cavalry for my El Cid project, this time Christian cavalry, and I thought it an ideal opportunity to share the collection for the first time. Starting with the Christians, I would return to the Moors when I have another unit completed.

When I decided to do El Cid I was particularly taken by how colourful it was, I wanted to reflect that in my armies and have units that were tied together by a colour scheme where I could. Chum Chris was collecting some figures too and had gone for the traditional red and yellow colour scheme favoured by the Spanish royalty as far back as this period, so I looked for something a bit different. Frustrated initially I found that El Cid campaigned under a red and yellow banner and his enemy the Count of Barcelona and his Catalans did as well, that must have been confusing.

So I started to dig a bit more for something different. I decided to look at the County of Asturias. At the peak of the Arab conquest this was the only remaining Christian Kingdom in Spain. Right on the Northern Coast on the edge of the Basque region. By the time of El Cid it was part of Castille-Leon but still a seperate County with its own Count. A little searching on the Tinterweb and a very interesting flag can be found. 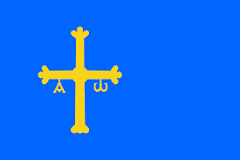 Now this sets the basis for a different and very colourful force, the Asturias flag with units of foot and horse in various blue and yellow shield designs. By coincidence this is in fact a favourite colour scheme of mine so I was never going to pass this up.

According to Wikipedia "According to the tradition, the Victory Cross was carried by Pelagius, first King of Asturias, in the decisive Battle of Covadonga against the Moors in 722. This battle, fought in the mountains of Asturias, was hailed by 19th and 20th century historiography as the start of the Reconquista, the Christian re-conquest of the Iberian peninsula from the Moorish domination. However, there is not any historical evidence about the use of this cross.

In 908 the Asturian King Alfonso III the Great ordered that the original wooden cross, made of oak, be clad in gold and precious stones. Currently, it is kept in the Holy Chamber of the Oviedo Cathedral.
The Greek letters Alpha and Omega hang from its horizontal axis. This is a direct reference to the Book of Revelation(verses 1:8, 21:6, and 22:13)., I am the Alpha and the Omega, the beginning and the end, says the Lord God, who is, and who was, and who is to come, the Almighty."
So all that being said here is the latest unit completed first. Light Cavalry in the colour schemes of Asturias. 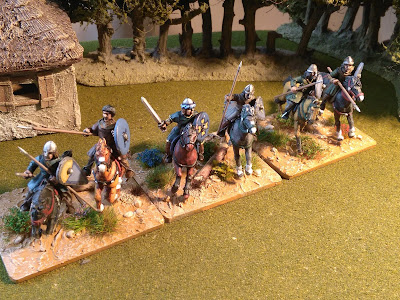 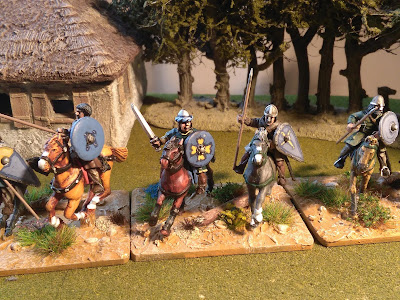 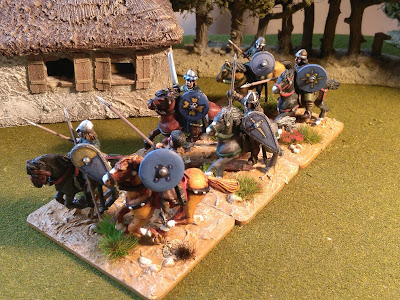 So thats the latest unit what about the rest of the Asturians?

Firstly the rest of the light cavalry. 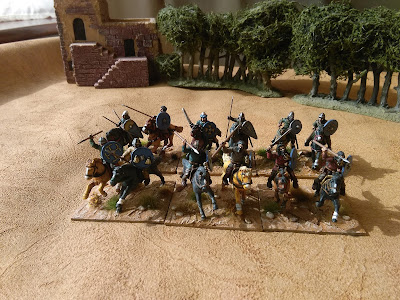 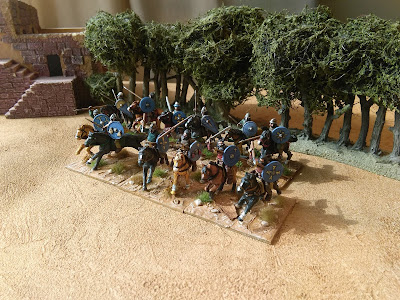 And then the heavy cavalry. Knights or to the Spanish Cabaleros. 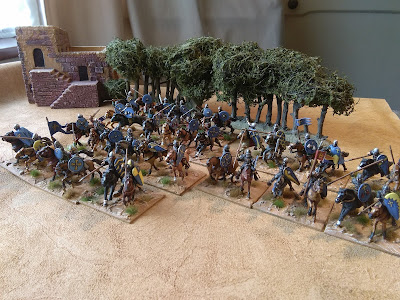 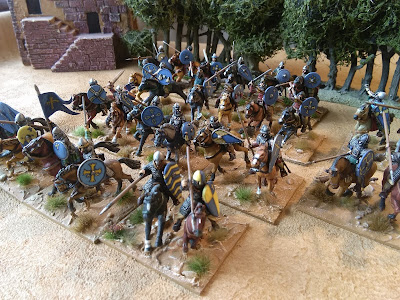 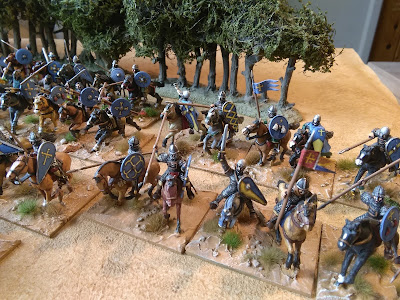 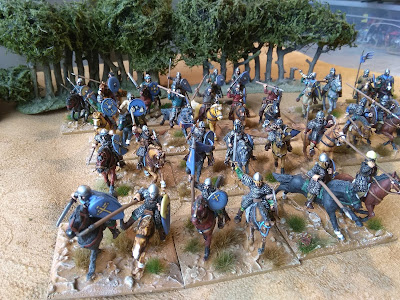 I have then added cavalry in other colour schemes. Mercenaries in mixed shields. A conroi in green and gold and another in traditional spanish red and gold. 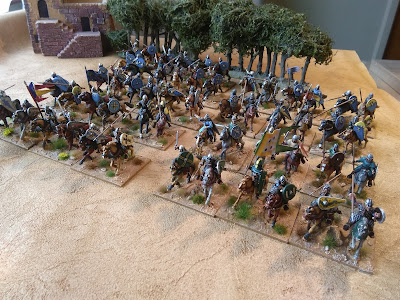 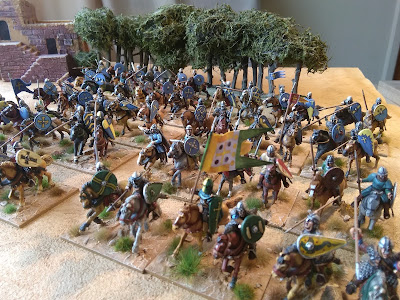 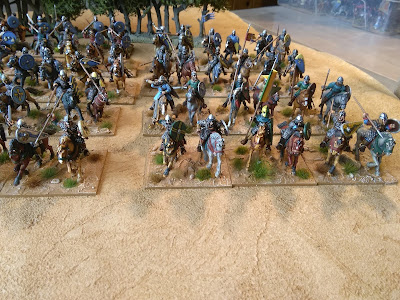 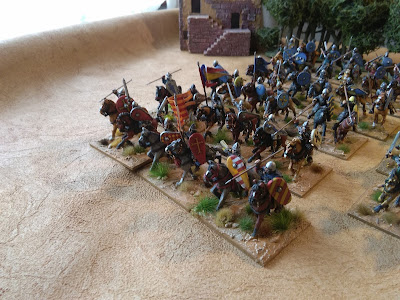 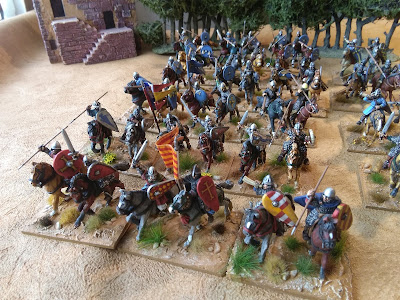 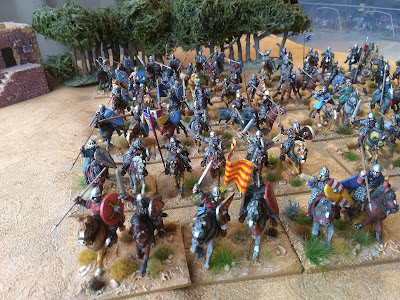 Every army needs its commanders. Here the Cid himself rides up for a chat with the Count of Asturias and another commander. 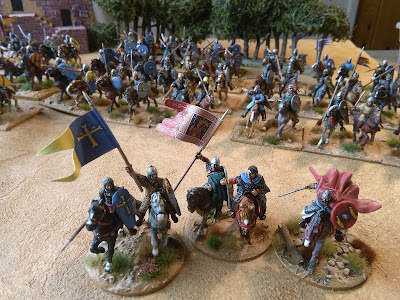 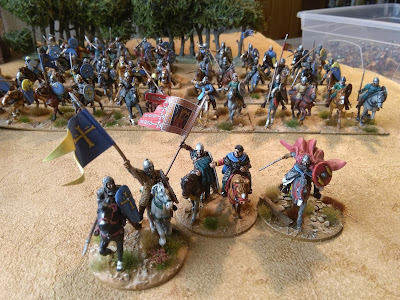 Ok so thats the horse, what about some foot.  I should point out here that my love of painting cavalry got the better of me with this collection. Spanish armies were horse heavy compared to some other nations but I do have work to do on the foot.

Firstly two units of Asturian unarmoured foot with their archers. 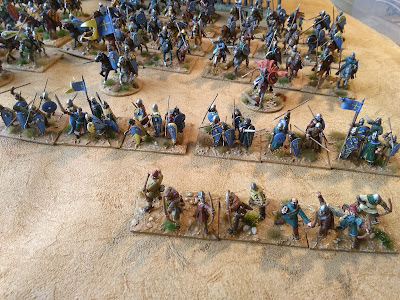 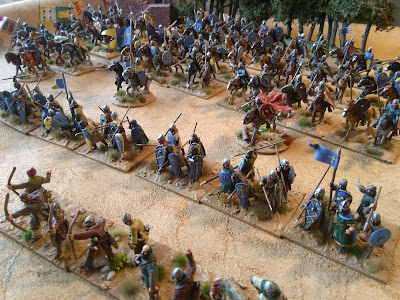 For the rest I have used similar schemes to the cavalry. One gold and green, one red and gold and two mixed colours. I have shamelessly used northern European troops here. There were lots of mercenary bandsin use and fashions from the north made there way to Spain. 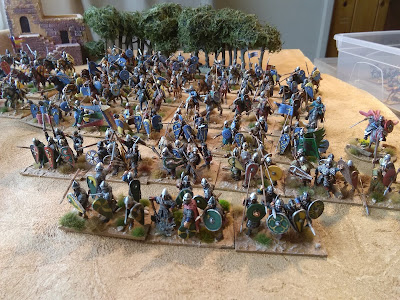 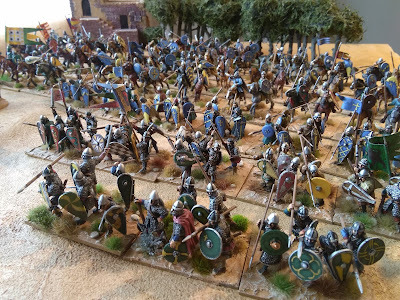 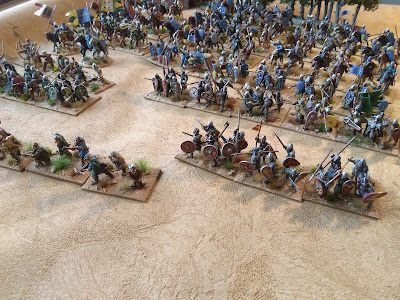 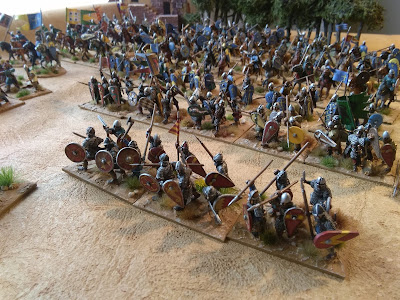 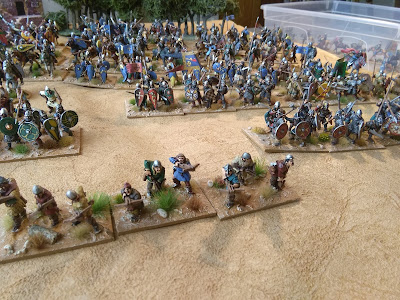 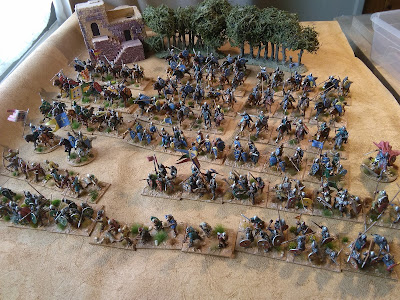 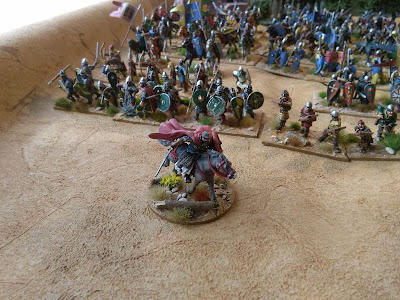 And of Charlton Heston rides to track down Sophia Loren....

So I hope you enjoyed seeing these. Back to Great Northern War soon I promise.
Posted by RogerC at 07:59