So back from sunny and very very hot Spain. On the Sunday before I left I was invited to play with Ken (Yarkshire Gamer) and chums a 1941 western desert game.

The team use Too Fat Lardies amended rules Iron Ivan or a coffin for 7 Brothers. This is my favourite theatre of WW11 so I jumped at the chance.

Ken will no doubt have a full write up on his blog shortly,  http://yarkshiregamer.blogspot.co.uk/  in the meantime  I thought I might share my experience of gaming at Kens and a few images, please note that most of this is from my perspective as I tended to forget what was going on anywhere else on the battlefield.

The game had three Allied commands, each containing a battalion of foot, a unit of tanks and a unit of armoured cars, assaulting an Italian force holding a fortified village and a series of hills. The Eyties had two battalions, two armoured cars, 3 AT guns and three tanks but had reinforcements on the way, including some German troops and armour. 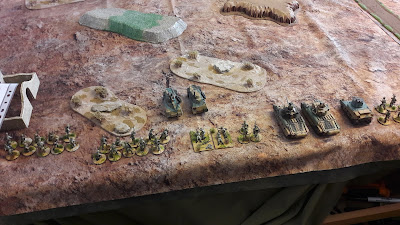 My command, pictured above had a battalion of South Africans, a troop of two Marmon Herrignton armoured cars and a unit of three tanks, two matildas and a Stuart. 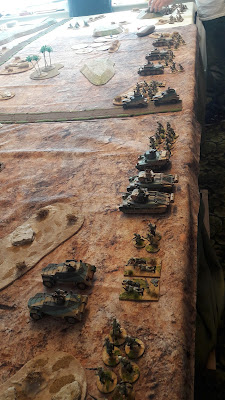 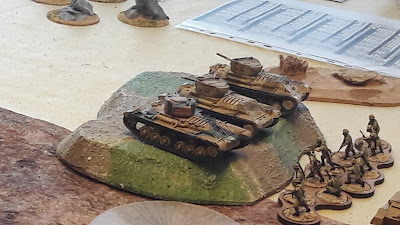 Looking down the table Ian next to me had a similar force but three cruiser tanks rather than matildas and Lonnie further down had valentines. 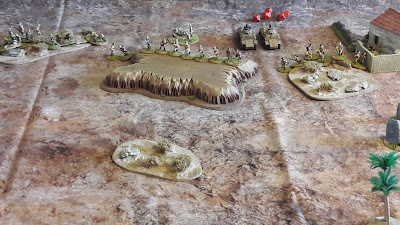 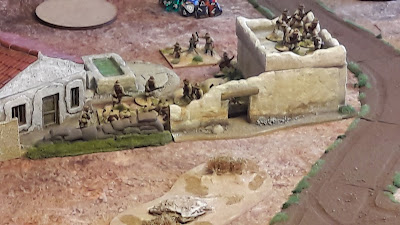 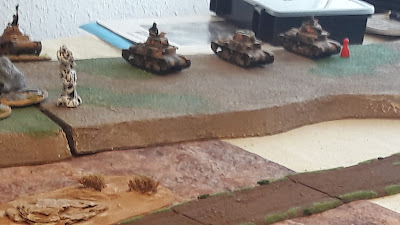 Rob was directly opposite me with two armoured cars a 45mm AT gun and a battalion of Italian foot.

Steve in the centre had a battalion in the fortified village with another 45mm and a 20mm, Ken had the three tanks on the high ground opposite Lonnie.

The game is card driven and a T break means anything that hasn't gone loses its turn other than to move into cover if possible. Frustratingly this meant that the allied foot stood still pretty much for the first two turns.

Our armour manoeuvred forward using the available cover with the exception of one of Ian's Morris armoured cars. This car belted down the road in the open with amusing if predictable results 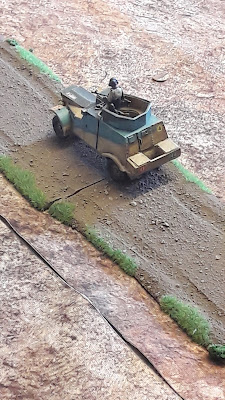 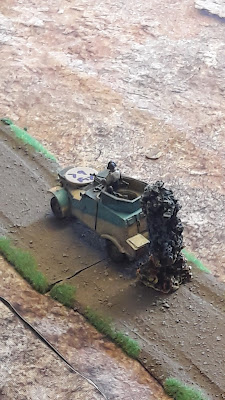 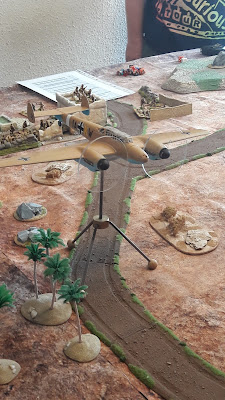 Both sides had their share of fairly ineffective air cover and Ians loss of an armoured car was quickly balanced by one of the Italian cars going boom from a particularly effective Boyes anti tank rifle. 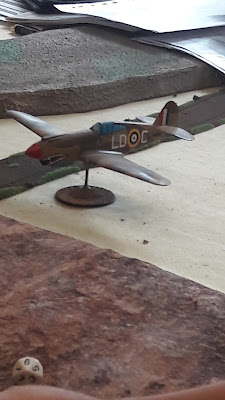 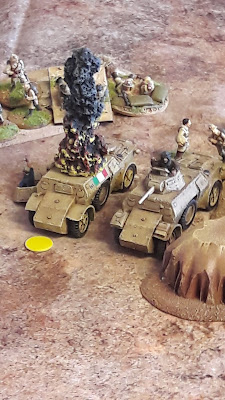 It was about this point as my armour clattered off without infantry support that Ken realised that the Allied infantry cards had not yet been dealt into the pack. Oops, no wonder none of them were moving. 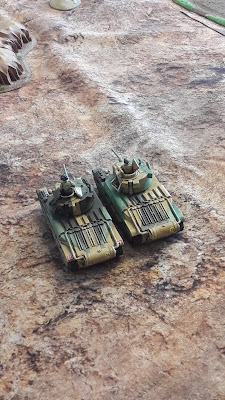 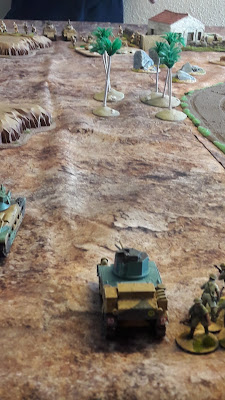 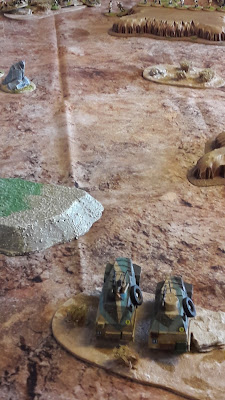 Meanwhile as the foot eventually start to move I get my Stuart to the edge of the wood and start laying down some fire on the Italians. Unfortunately Robs scout car moved into position and quickly knocked the Stuart out with an exceptionally lucky shot. 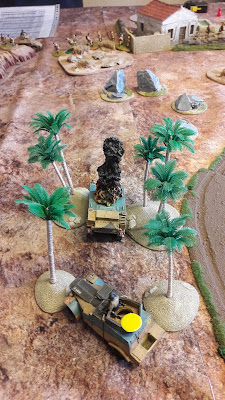 Meanwhile the first Axis reinforcements arrive and the hill is looking a bit busy. Another unit of German scout cars is also moving into position. This seems the ideal time to stop for some Fish and Chips, so we promptly do. 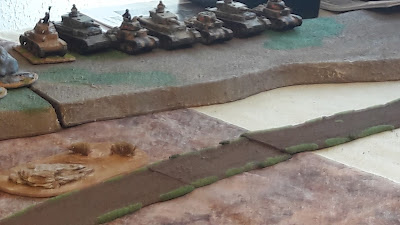 As the allies press forward both sides start to take infantry casualties, the Matildas are almost untouchable but still attract a lot of fire from the 45mm. In quick succession the Matildas take out the second Italian armoured car and the 45mm takes out both Marmon Herringtons and the other Morris before the crew are finally wiped out by the South Africans. 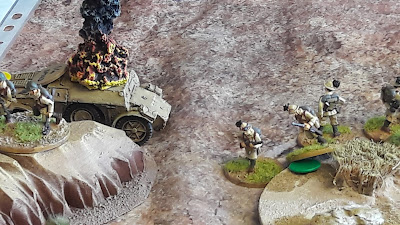 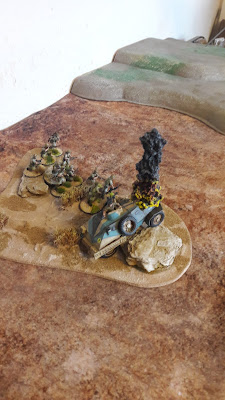 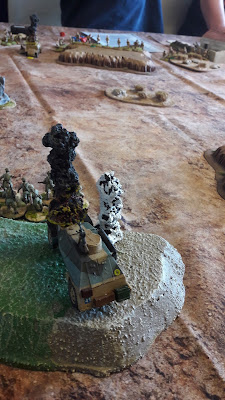 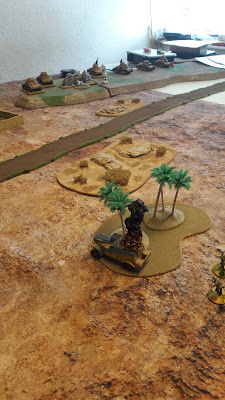 Lonnie has pressed forward with his infantry but its all rubber swords on the right and centre with relatively light casualties for both sides. Its a different story on the left. Five burning allied armoured vehicles and two Axis. The Italian 45mm is out, half the mortar crew are down and both sides have multiple infantry casualties. 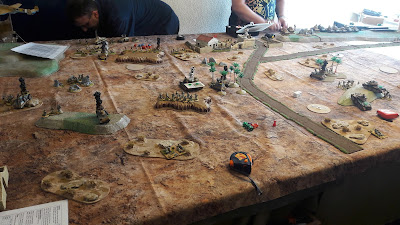 At this point the game is any ones still but its 4.15 so we leave it to pick up and continue another weekend. Great fun, I am sure Kens write up will bear no resemblance to my biased view of events, I look forward to the next instalment.

I will try and keep a better track of everyone elses game next time I promise!

Next to share back to the Great Northern War. Honest!
Posted by RogerC at 12:56