We haven't played Steve's home grown rules for a while so decided to have another play as he has made a number of amends.

Steve would command a mixed force of Germans defending an East German village, Chris and I would split an attacking Russian force.

The Russians had two companies of infantry a company of SU's and some support weapons. The Germans we would find out as we went along.

I had to get in quick before Chris nabbed the battenburg. 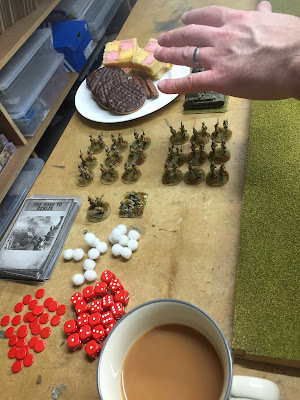 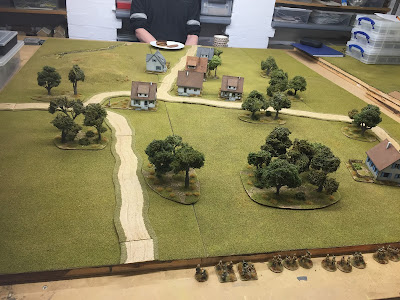 The rules are card driven and not disimilar to the Picquet in terms of activations. As we deploy on table the only Germans we are aware of is the mortar dropping harrassing fire on us, clearly directed by a HQ in one of the buildings but which one? 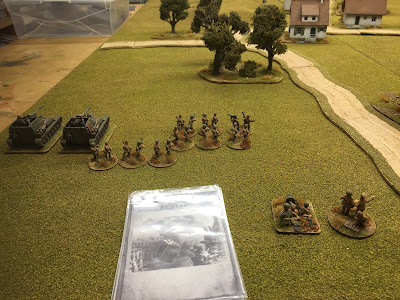 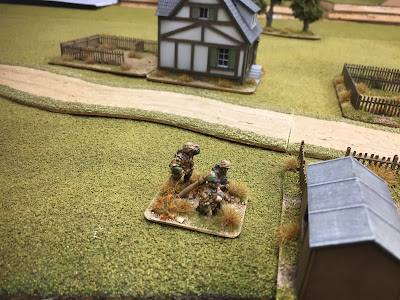 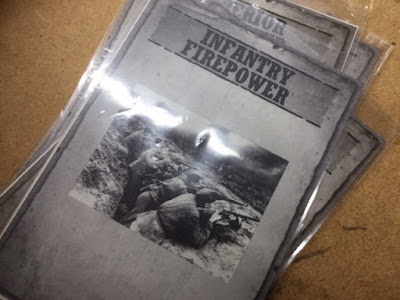 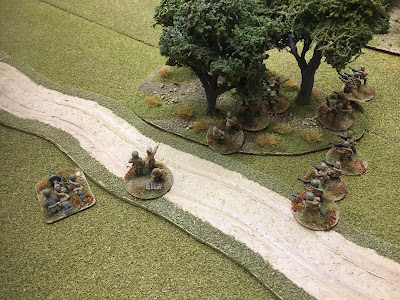 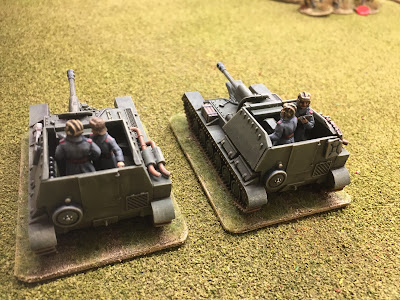 We push forward and my SU's are nearly half way up the table before they bump into a platoon of Police with Panzerfausts and back off out of range with two points of damage on one of the vehicles. 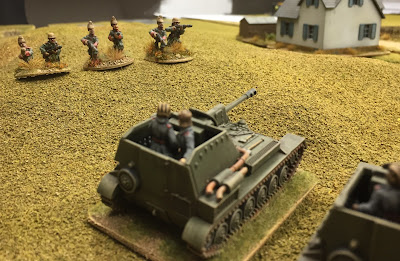 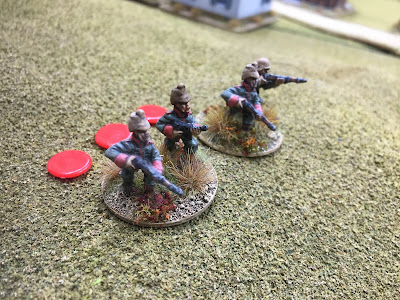 My return fire from a safe distance puts the platoon almost out of action with three suppression points and taking a base of as casualties. Across the rest of the table the infantry on foot are trying to keep up. 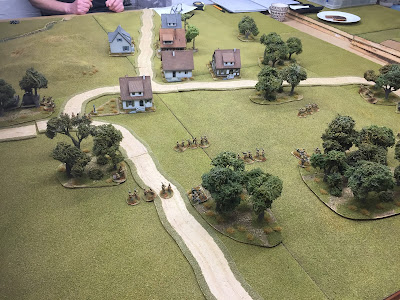 As soon as we are in effective range Steve opens up with a platoon of Panzer Grenadiers from one House and a platoon of Police from another. Chris and I return fire from multiple weapons then get forward to close assault them. 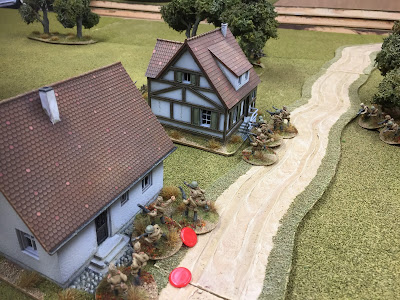 The Police unit surrender and my SU's go back up the hill only to discover  Panzer Grenadier MG and a HQ spotting team. 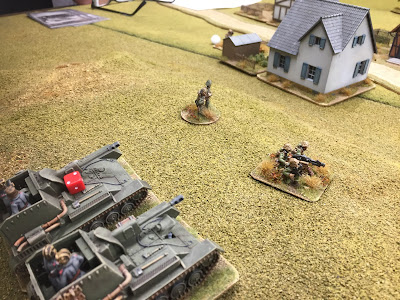 We are outside the houses but without a close Assault card the best we can do is keep firing in and reducing the numbers of defenders. 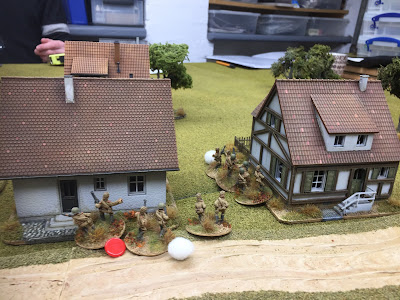 My SU's inflict some damage on the MG but then a Hetzer hoves into view and blows both up with one round of firing. Oh dear, things had been going so well! 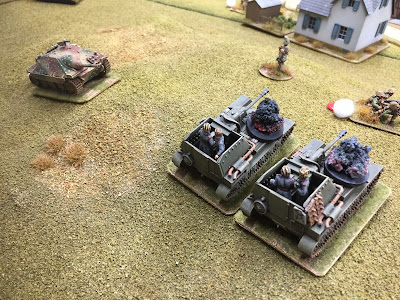 I missed a couple of card turns with the camera, Chris flushed some Panzer Grenadiers out who beat a hasty retreat in front of his SU's, he then turns the German flank only to find an AT gun waiting and inflicting serious damage on both remaining SU's.
Discretion being the better part of valour he pulls them into the village which we have just occupied having close assaulted both front houses and captured the remaining defenders.
Unfortunately the Hetzer is re-positioned and hits a further SU as it pulls into town. 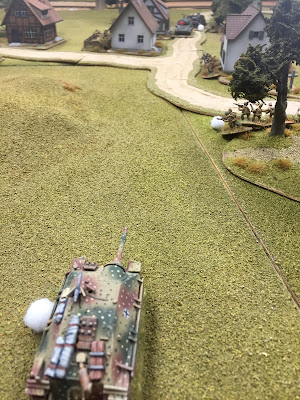 I push on, close assaulting the next block of houses with a platoon, unfortunately they fire on me, combined with the Panzer Grenadiers in an adjacant block and push my chaps back. 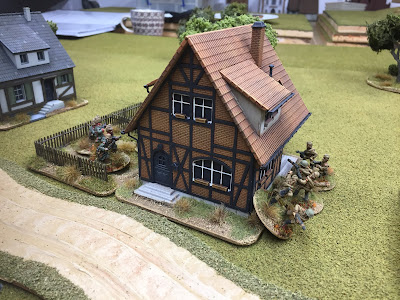 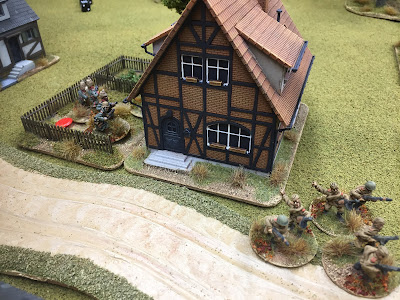 Having advanced one MG and my HQ I am however starting to cause casualties on the Panzer Grenadiers entrenched on the hill. 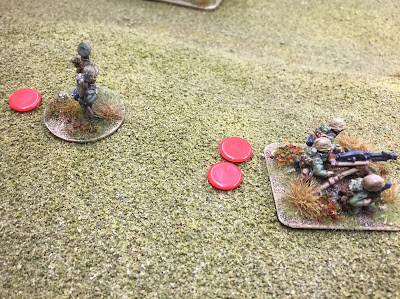 We are now also starting to concentrate fire on the Police occupying the next house. 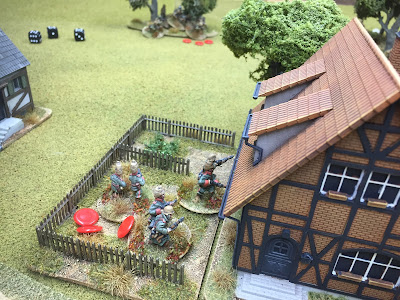 A further close assault from two platoons and the remaining Police are overwhelmed and surrender giving us control of 4 out of 6 buildings. 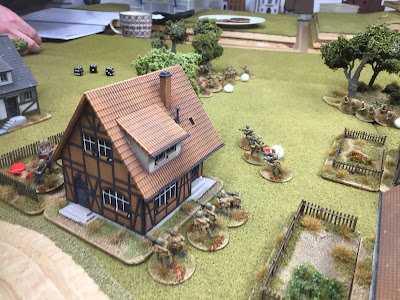 Meanwhile Chris close assaults the woods on our right flanks and destroys both the company sheltering there and the anti gun dug in on the edge. 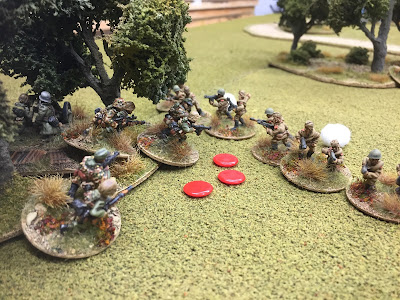 With the Germans having only two companies remaining and holding the last two houses and Russian victory is declared. Steve however made us work hard for it. 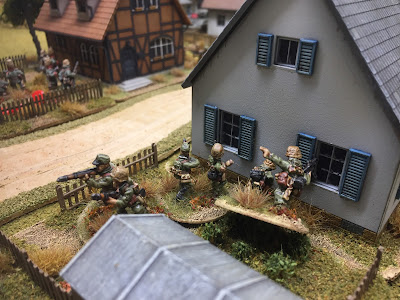 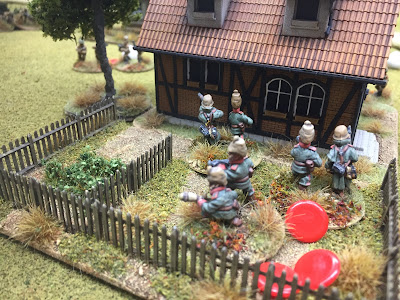 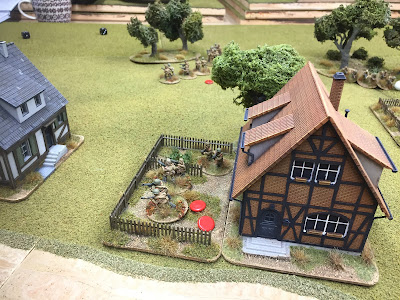 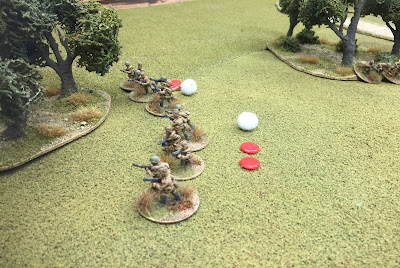 A fun game thanks Steve, I look forward to our next encounter.