Steve has made good progress with Chris"s French and Indians so we opted for a Sharp Practice as the last game before Christmas to try them out.

We had a bigger table this time and a different mix of troops, the objective being to hold the buildings at the end of the game. 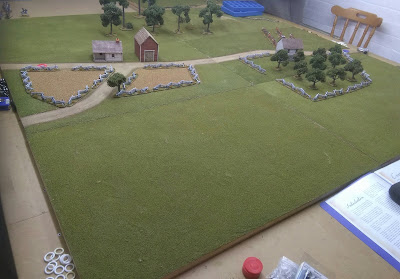 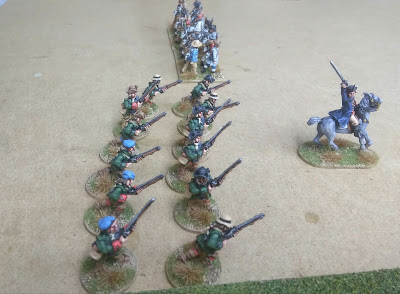 I had the British forces; 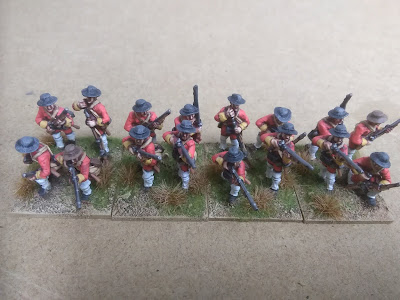 Chris had the French and Indians:

So the edge in terms of numbers definitely with the British but the flexibility all in favour of the French. 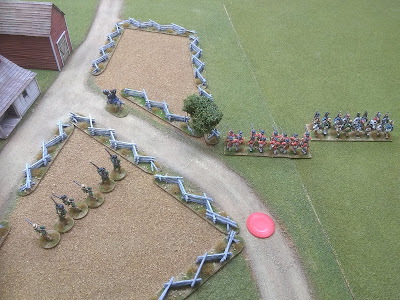 The biggest threat I can see is from the Indians using their mobile deployment point to get around my flank and swamp me at one point, as the deployment point can only be moved if out of line of site I throw a unit of Settlers out of their cabin and into the woods to force Chris to deploy further away. I know I am a cruel and ruthless commander. 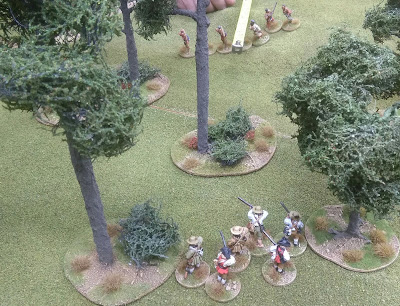 I decide that the further cabin is too exposed to defend, as you can only fire two muskets from a window only four of the 6 defenders could fire so I start to pull them back as the Courer du bois deploy in the woods at the end of the table. 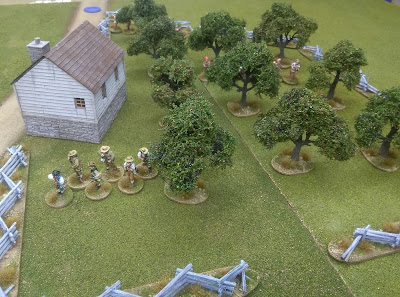 I decide my rangers can push out to the left and support the settlers. The formed units will advance to the woods to my front. 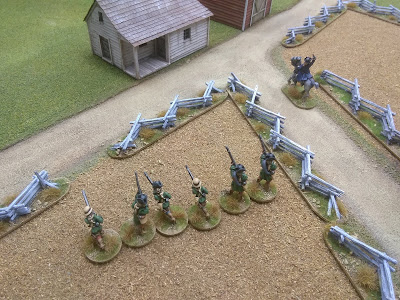 My first Settlers get to the edge of the woods forcing the Indians to deploy, not sure how happy they are about it mind you. They fire a volley that adds a little shock but nothing else. 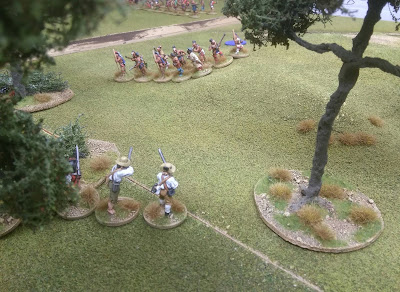 Wasting no time Chris's Indians pounce on the settlers and with some great dice wipe them out to  a man. Time will tell if their sacrifice was worth while. 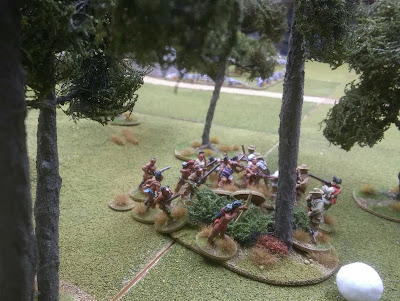 The first unit of Rangers gets to the other side of the woods too late to support the settlers, it is now also becoming apparent that Chris's main attacked will by his 36 Indians through the Woods and I have allocated only 18 skirmishers to stop them and 6 of those are dead. Oh dear. 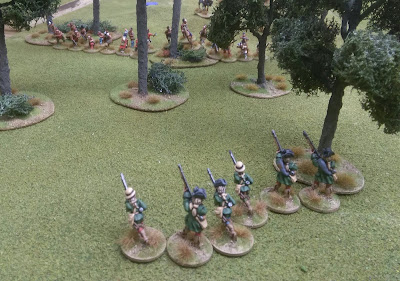 Chris takes his time pushing his three units of 12 redskins out in an ark to take advantage of the wood line. I need to re=think my plan. 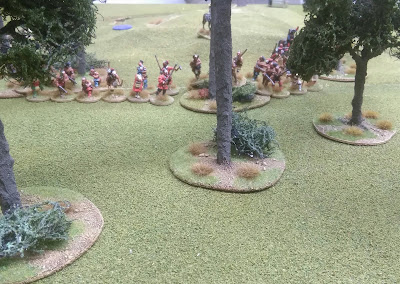 As the second unit of rangers reaches the edge of the woods Chris opens fire with three hits, I get lucky with my casualty dice, three ones is no damage. Still it serves as a warning. 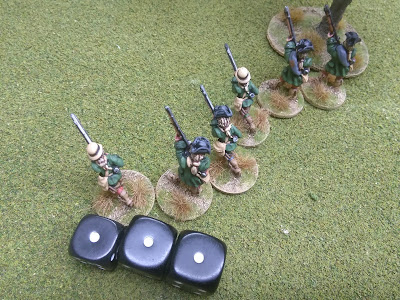 Back at the other end of the table the formed foot have not got far at all but my settlers are doing OK against the Courer du Bois. 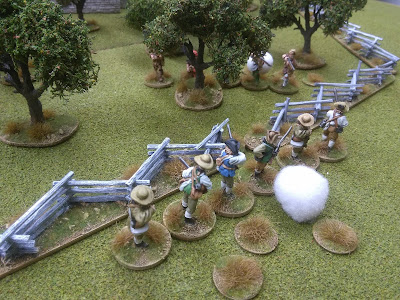 I decide to change tactics before its too late, I can now see the Indian or all committed to my left flank and only two units of skirmishers are coming from my front and right, I start to pull the regulars and militia back to the settlement with a view to forming up behind the fences. I will keep one unit of rangers with them and send the other to help the settlers keep the Courer du bois busy.

Any plan is better than no plan! 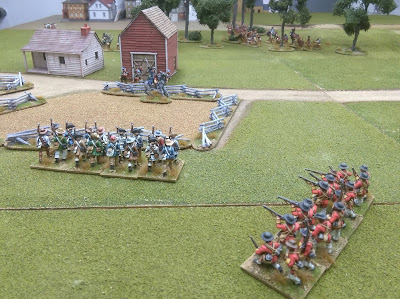 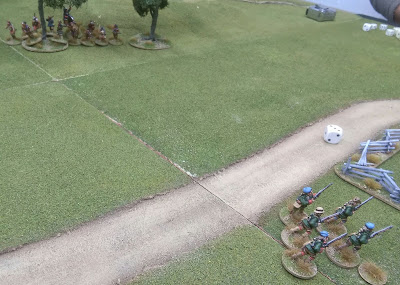 The Indians volley my retreating rangers but again I am lucky with the saving dice, however the unit heading forward to support the settlers is not so lucky and starts to take casualties in the open. 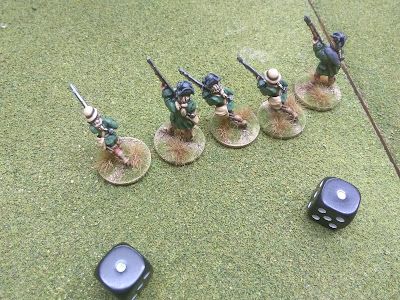 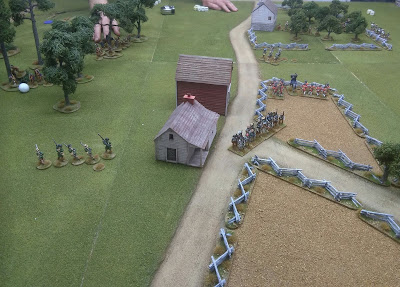 The cars now fall well for my formed units and I quickly get the British regulars behind the fences and the militia lines out to the rear of the settlement to stop us being flanked, the rangers are in the cabin and the Indians are very reluctant to leave the safety of the woods, who can blame them. 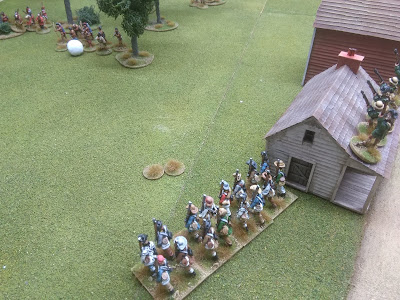 Chris pushed one unit out to try and get around behind us but the Militias first volley of the day is devastating and Chris decides the woods are where he needs to stay and pulls the badly mauled Indians back. 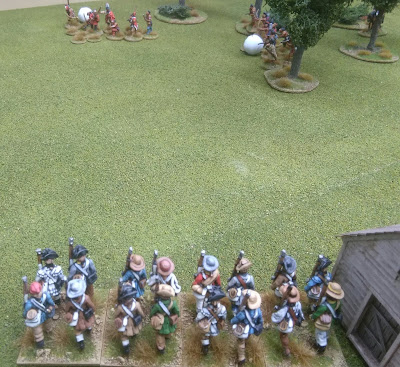 My rangers have taken two more volleys from the both sides and start to be pushed back leaving the Settlers on their own, but to be fair they have doe  really well and forced one unit of the French back and damaged the other. 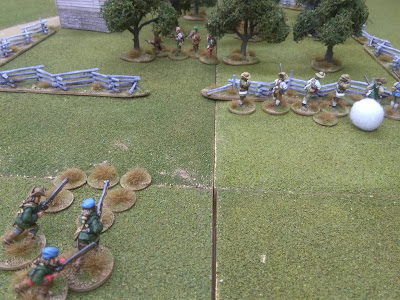 Chris now concedes that he is not going to be able to get anywhere near the settlement now and the British take a win.A fun game and a lesson in what does and does not work for the Indians, we agree that more cover will probably be needed for them to be successful in future games.

Thanks for putting the game on Steve, as usual great fun.
Posted by RogerC at 15:34