This is the Second unit of Lifeguard back from the basing department.

As with the last these are Warfare miniatures and a mix of old and new sculpts utilising the old style horses. Whilst the old style figures are very nice, the new ones are a bit special, very nice indeed, dynamic and characterful.

The Lifeguard of Horse, or Livgard Til Hast, were a guard unit that saw a lot of action just like the foot guards. They were also a very large unit with 10 squadrons fighting at Kliszow so I have done two units of these. As they split the regiment into two and deployed them on opposite wings having two of these seems right. The light blue uniform also is a contrast to the dark blue and grey of the rest of the Cavalry. 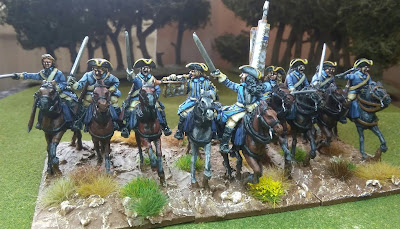 Viewed from above you can see I have based these in the usual wedge formation of the Swedes. The trooper on the extreme right has got a bit carried away and is slightly out of formation "Back in line damn your eyes!" OK so I couldnt fit him on comfortably in the usual way so had to put him slightly forward. Never mind.

Four of these figures are from Warfares earlier ranges, on the left hand base we can see the first and third figures from earlier ranges. The first figure is a generic 17th century cavalryman with no hat, the third from the left is the old test figure for the Swedish cavalry. The on in the middle is one of the dynamic new Swedes. 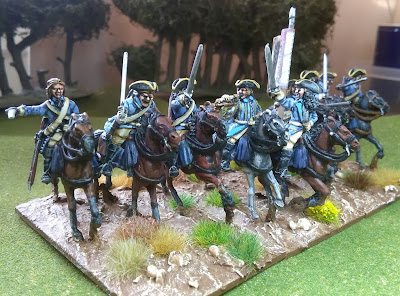 The command base is all new figures, I love the officer in particular waving his men on. The right hand base again has two of the older Swedish test figure with one of the new charging figures in the middle. They mix quite nicely I feel. As mentioned in other posts and also by Barry on his League of Augsburg blog the new and old figures are not exact fits if you mix the horses, but they can be made to fit if you are careful. 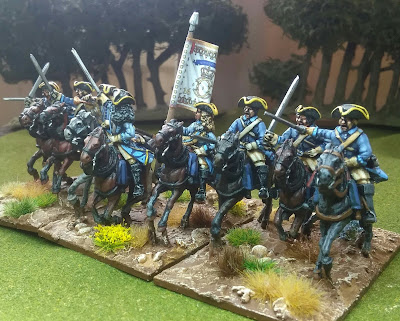 This last shot of the rear is quite nice and again shows off the formation, the extreme right figure has a blanket roll where the others do not but again I dont think it detracts from the look of the unit. 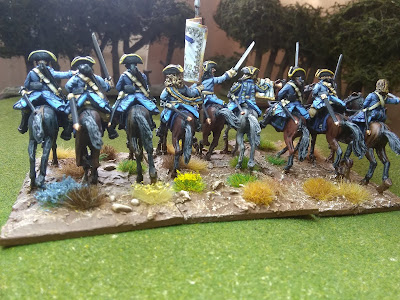 I have two more units of Cavalry after these are done, one of Dragoons and one of Horse, not finalised which units they will be yet. I may go for Sodra Skanska as they also had pale blue but with white hat lace so a slight contrast with a nice flag. Lest see.

Anyway thanks for reading and I will see you again soon.
Posted by RogerC at 06:57