Each side having a number of morale chips, every time they loose a melee or morale check a chip is removed, once they are gone that sides stats all fall and if they continue to loose chips after they have all gone, it adds them to the opposition pile of chips. Interesting concept.

Perhaps it was the heat but the game didnt quite seem to have the same flow as the others. Perhaps it was too big a gap and we had all forgotton the rules or maybe the cards came out funny and it didnt flow quite as well. Either way it wasnt quite as good a game as the last three. 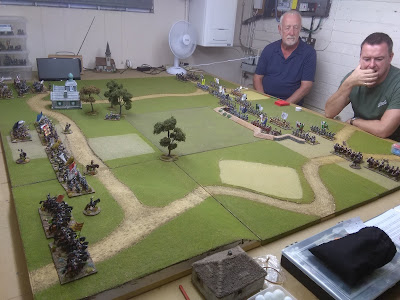 As we were adding unknown elements to the game and had not played for a few weeks we decided on a small game. Mark and Chris had 12 battalions of foot, 4 regiments of horse and 3 guns with a large earthwork to defend. I had 9 battalions of Swedes, including 3 guard, 4 of horse, 1 was guard, and one gun. The Swedes of course were attacking.

The quality of the Swedes should balance the numbers, firepower and defences of the Danes. The colourful Danes are all Marks troops (Apart from 2 saxon cavalry) and the Swedes all mine.

My new Swedish Jonkoping regiment was also getting its first outing, we had no hopes of this lasting long, new units usually run away very quickly.

I deployed first with 2 regiments of horse on each wing and 6 battalions in the centre with the gun. Chris and Marks cavalry conformed to mine and the majority of the foot massed inside the earthworks along with 2 of the three guns. I was then allowed free deployment of my guards brigade of foot after the Danes had deployed, I chose to load these up on my left flank supporting the cavalry and hopefully being able to smash through the Danish foot brigade outside the defences on this wing. Well that was the plan anyway. 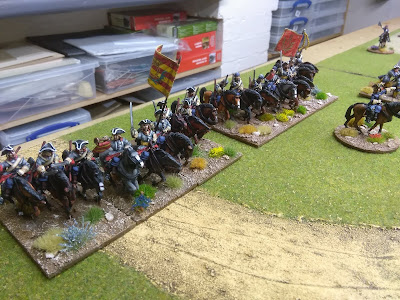 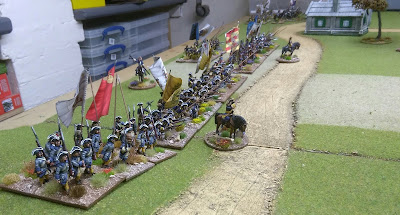 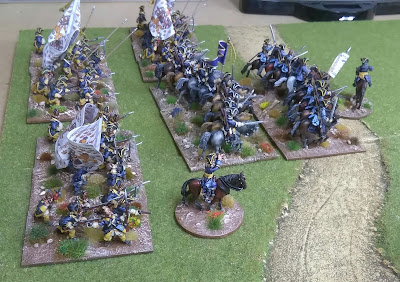 The cards fell in such a way as I was able to get my horse forward but not the foot for nearly an hour, only managing one move forward during that time, Mark and Chris were also able to manouvre their horse and chose to keep their foot sensibly in place and wait for the Swedes to march into their guns. Some initial cannonade was relatively ineffective from both sides at long range, the Swedes rolling a D4 against the a D6 defensive dice and needing to beat it by three to get a single casualty, it wasnt really worth the spending of a chip and eventually I gave up wasting the powder. 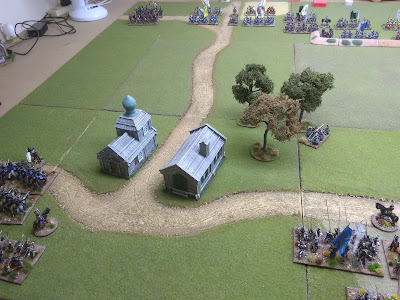 A bit more manouvre and a second engagement saw the Swedish horse guards routed by the Saxons. Oh dear, this wast in my plan at all! 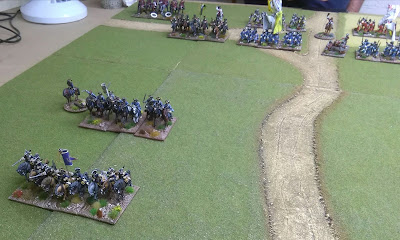 On the Swedish right the cavalry had also now engaged and things started a little better. two wins forcing the Danish horse back in disorder. Eventually this led to both Danish cavalry units routing. It didnt all go my way though, one of my cavalry failed to rally and pursued the broken Danes, as the morale card came out straight after the melee and they were within one move of the table edge, the Danish cavalry fled the table pursued by my Swedes, now lost to the game. 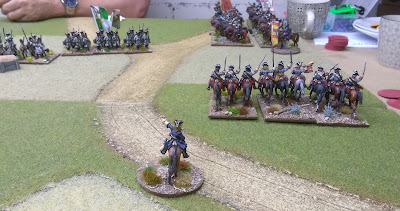 The morale card also allowed me to rally my routing horse, the Guards rallied and shook off their casualties, the other horse though continued to rout straight off the table. 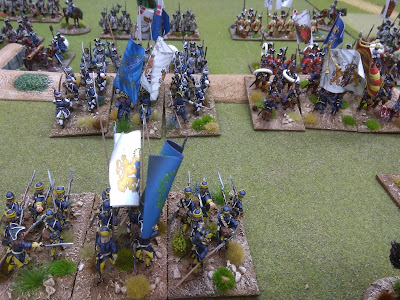 The cards for the foot now started to come and I was able to get forward into the earthworks, but a couple of units took a severe beating, particularly from the guns, in doing so. Guess who broke first, yes it was the brand new Jonkoping regiment having taken too much damage from musketry and artillery. 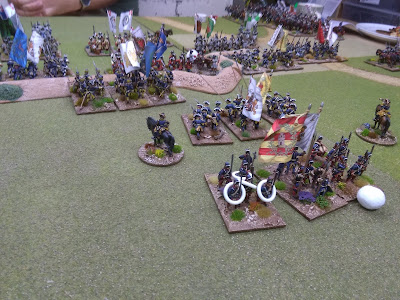 Over to the left the guards brigade now had three move cards on the trot and quickly closed with the Danish flank. The guard horse charged the Danes and was able to win this time routing them off. 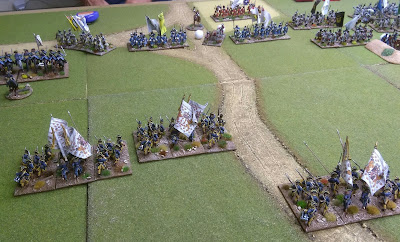 The Danes poured musketry into the guards as they closed, Honours were even, the Guard Grenadiers took 5 casualties and were destroyed whilst the extreme left guards battalion routed the Danes on the end of the lines opening room up for a potential swing behind the Danish line by my horse.

A fierce melee in the centre saw first one and then a second Swedish battalion drive back the defending Danes and gain a foothold in the redoubt. The Swedes on the extreme right forced back the Danish foot, again leaving the potential for my remaining horse to sweep around the rear of the Danes. 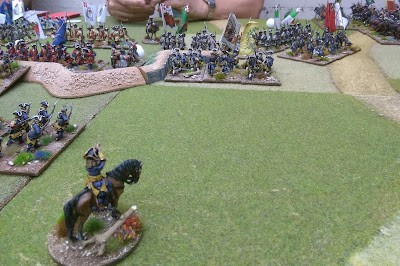 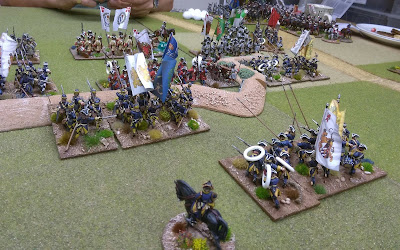 It had been a close run thing all said but the Swedes were now in a very strong position and the Danish advantages of artillery and earthworks had been negated.

The Jonkopings however could not be saved and continued their rout off table. 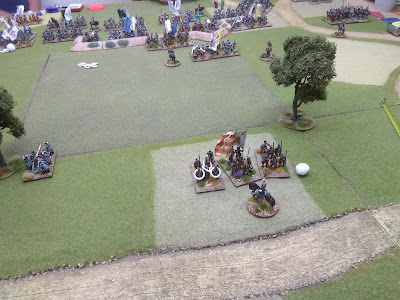 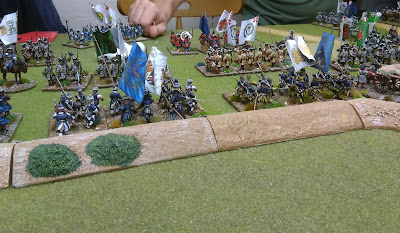 The game ended with both both Danish flanks exposed and two Swedish battalions inside the earthworks. It wasnt all over yet, the Danes still had 4 uncommited units who could pour fire into the Swedes and some of the Swedish foot were particularly shakey but all told it was unlikely the Danes could now win. At this point 20 minutes later than planned we called it a night.

The card system for some reason did not seem to go as well as previously. I guess thats to be expected with random systems though. I cant put my finger on what didnt feel right, perhaps it was just not a good night for the game, who knows. The outcomes and responses all felt right.

The Swedes have had it all their own way last few games, they are difficult to stop when they get a roll on. That said we have used guards brigades as a sledgehammer in most games so far, the Russians faired much better against the Swedes in the Baltic where the Swedes had no guards units and utilised a lot of the Tremmaning regiments which were not quite as battle hardened. Perhaps a game with less quality for the Swedes is worth trying, adding Polish allies in to make things more interesting may also change the feel of the game.

I hope to run another game in a few weeks on a bigger table with a greater variety of troops to really test the game mechanics now that we have got our heads around the systems.

Thanks again to Steve and Julie Shann who are great hosts and Chris and Mark for sticking with what can sometimes feel like a one sided game.

A couple more units of finished figures to hopefully share with you before the Baltic Cruise.

Thanks for reading, hope you enjoyed it.
Posted by RogerC at 03:59