Back in May I was lucky enough to play in  a participation game with Dave Imrie and chum Jack at the Partizan Wargames show. I did enjoy it but as usual when playing rules for the first time wasn't entirely sure about. Since then we have talked about using the rules for a variety of periods, mainly on the basis that it would be a much smaller outlay in terms of number of troops for a Sharp Practice force.

I picked up a set of the rules and tried to read them through. Now this is something I am particularly bad at, I just struggle to read anything that isn't fun so after limited success I decided we had better try a game and see if we could learn that way instead.

In the end I found I had two games on consecutive nights. However as I forgot my camera both times I only have shots from the second game at the East Leeds Wargames Club in Garforth.

For both games we used my Carlist War collection. These are the only figures where the basing allows us to use them for Sharp Practice. It did mean that my Carlist Generals were demoted to Junior officers and NCO's but at least gave us something to start with.

For the first game we set up a six by six area at Wargaming Chum Daves house with Dave and Howard taking opposing sides and me getting a small command but trying to help the other two with the rules.

Facing them were 2 lots of 2 platoons of Carlists with 5 skirmish units.

It took us quite some time to get going, the movement and firing sequences were simple enough, however we did find that with only 2 actions other than with the skirmishers everyone was pretty reluctant to advance as this would mean loosing the ability to fire that go so the game desolved into a firefight with the Liberal Cazadores coming off worst.

It wasn't quite the dynamic game we had hoped but played OK. One of the key issues had been keeping a track of which units had gone and which had not.

On night two at East Leeds I had the advantage that I had played the night before and two of the other players and read the rules thoroughly. Chris Flowers and I took the Liberals (I again had the Cazadores) whilst Chris Charlton and Steve Shann had the Carlists.

I had reduced the number of Liberals slightly but removed 2 skirmish units from the Carlists and replaced with a gun.  Most of the Carlists had cover an the table was slightly smaller at 6 x 4 feet. 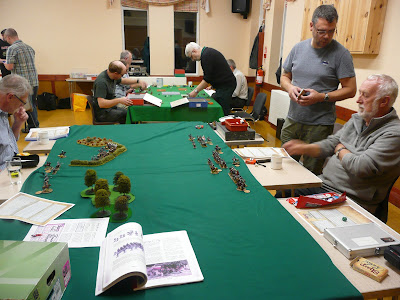 The game progressed much quicker and both sides began to take fire from their enemy pretty quickly.There were a number of sublteties we had missed the night before which did enhance the game. However again we sa that only the skirmish screens really attempted to close as everyone else spent their time firing and re-loading. 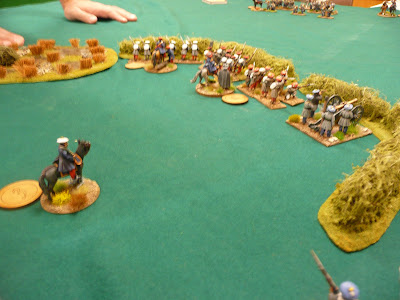 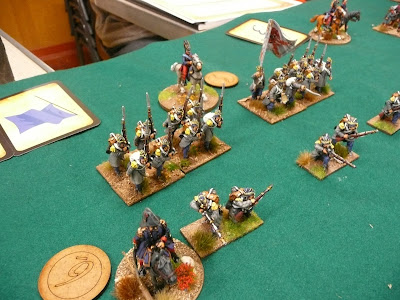 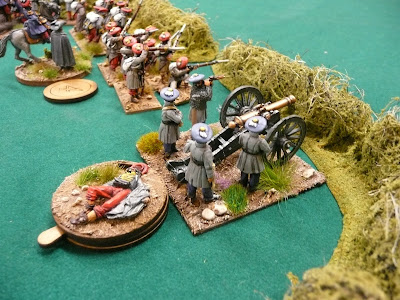 The Liberal Cavalry made a gallant charge on a Carlist skirmish screen, however by the time it got there it had lost 4 troopers. The ensuing melee despite hitting foot from behind with Cavalry did not go well. The Foots three dice left one shock and 2 kills whilst the Cavalry's ten dice only killed one skirmisher. The Cavlry promptly fled. 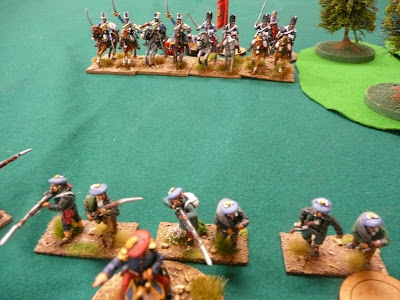 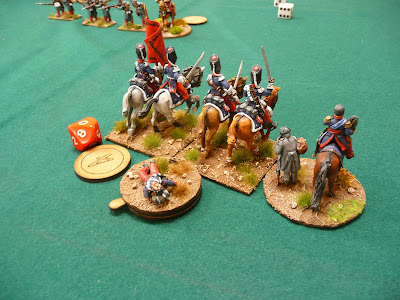 By the time it reach the table edge there were three riders remaining with 12 shock points.


Mean while the firefight in the centre took its toll on the Carlist position and all three units were in trouble. However the Cazadore skirmish screen was in even more trouble and the FFL skirmish screen was destroyed entirely. At this point the gun was brought back under control and began to do damage to the FFL three platoons. 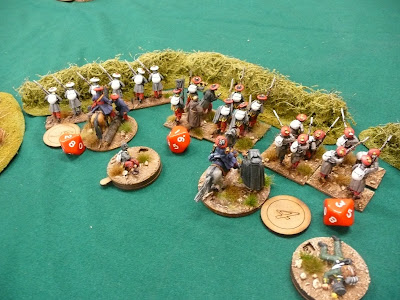 Suddenly it was 10pm and I had to pick the wife up from Leeds after a night out. The Liberals were in trouble and we agreed it was a narrow win for the Carlists. A better game but we do need another couple before I am likely to invest in any figures. That said I have plans for a Napoleon in Egypt force and possibly a retreat from Moscow force so fingers crossed.