Hang On To Your Topknot

We played another Sharp Practice tonight using Steves growing AWI collection with a few of my commanders. It was only on a 4 foot wide by 6 foot table and just the two of us but ended up being a great deal of fun. 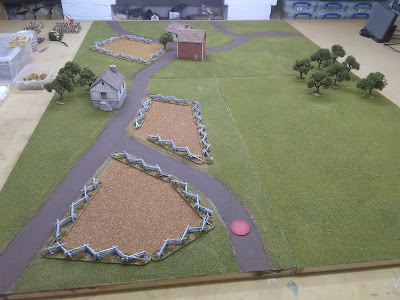 A simple encounter game, the Tories had two units of 12 Indians with all the special rules they get like tomahawks, 6 Jaegers and a formation of two groups 8 Militia. 46 troops in all. We were interested to see how the redskins played, we expected units of 6 skirmishers but they are in very aggressive tribes of 12 seeming to be more shock troops than skulking snipers. 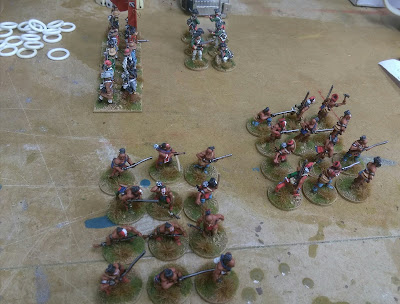 We rolled and the highest roll got the British, the high role went to Steve so I took my position behind the rebels who, as they were my troops, will henceforth be refered to as patriots! 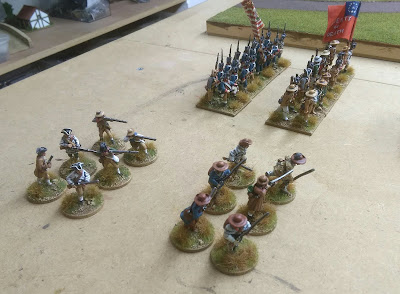 It took a couple of turns to get everyone going, I pushed my formed units straight up the middle with a view of smashing the Tories and Indians with volley fire. My rifles headed for the woods on the left and the militia skirmishers got muddled up in the formations before I could start pushing them right to the fence lines for cover. 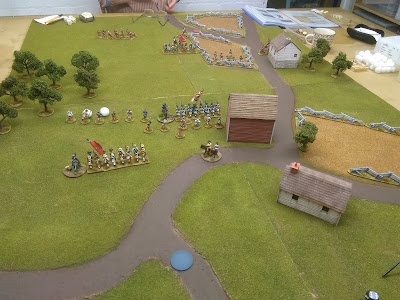 Steve got his Jaegers forward to the fence line pretty quickly and steadily advanced his militia, the Indians predictably headed to both flanks but were pretty tardy in their movement for the first half of the game. 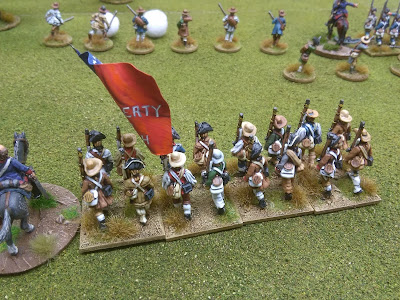 As soon as we got into range my continentals started controlled volleys at the Tory militia whilst the Jaegers targeted the continentals in return. The Jaegers had the best of it but my commander was close by and able to remove the majority of the shock. 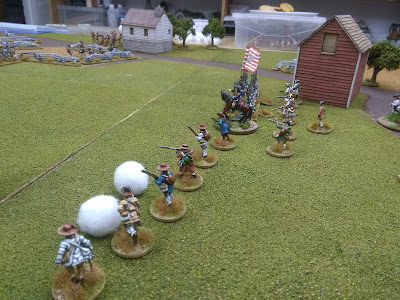 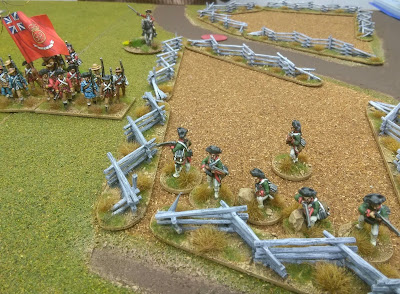 We were now into a firefight between the Tory militia, Jeagers and the Continentals whilst everyone else bumbled around not doing much. I slowly pushed my militia skirmishers towards the fence line on my right and the rifles towards the woods on my left whilst Steves Indians remained reluctant to get forward as did my militia. 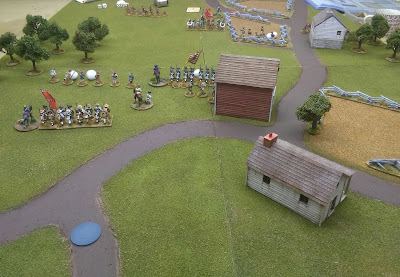 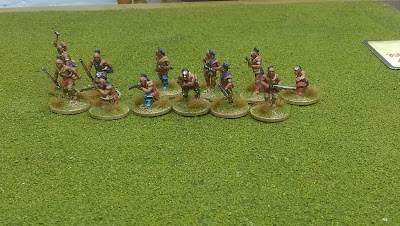 At this point things started to hot up a little. The volleys started to tell on Steves militia formation but more importantly my Militia and Steves Indians got going. My Militia stepped into line with the continentals and fired a devastating volley into the Tories. On my right the Indians slipped into the woods just as my rifles entered the opposite edge and on my left the other group of Indians charged my small Militia skirmisher units which was partially covered by the fence. 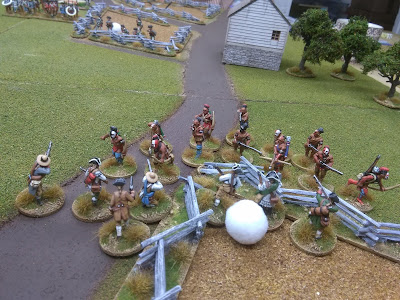 A number of things happened all at once at this point. The Indians are fearsome in close combat. The Tomahawks ability allows them to roll a dice each on the way, for every 5 or 6 a point of shock is added to the enemy. With twelve figures this should be at least 4 points of shock before contact is even made and the Indians are aggressive so get 2 extra combat dice.

I was already unloaded and without bayonets so not in very good shape at all.

The redskins are pushed back, my card comes out next and I volley them to add another dead and another shock.

Both Steve and I are laughing at the particularly daft turn of events. 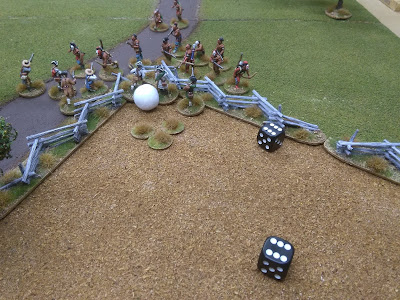 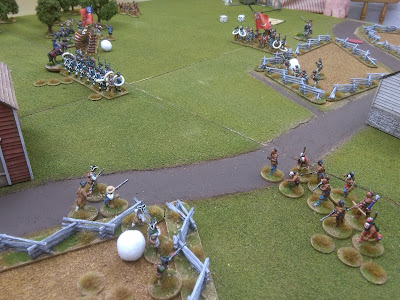 On the other side my 6 rifles take on 12 more Indians, my volley into hem is pretty ineffective and this time the tomahawks rule works as it should for Steve and he piles 5 shock on me before he charges in. I kill one of the Indians and add a couple of shock but the rifles are sent reeling with three dead and 5 shock. 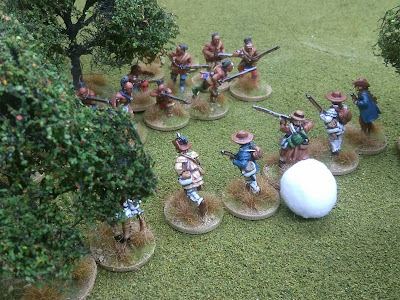 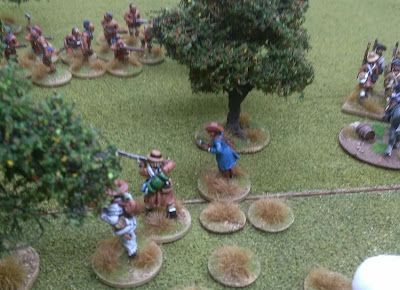 On the other side the Indians charge again but the shock comes off their movement and they stop an inch short of my Militia. who fire into them causing more casualties. 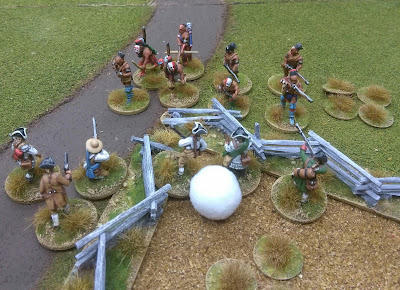 Unfortunately this is not the good news it should be. I am doing so well that the the Militia get an uncontrolled charge into the Indians. I have more dice as I have now become aggressive but I dont have the fence to hide behind. At the end of the Melee the 12 Indians are down to 5 but my Militia skirmishers are wiped out. 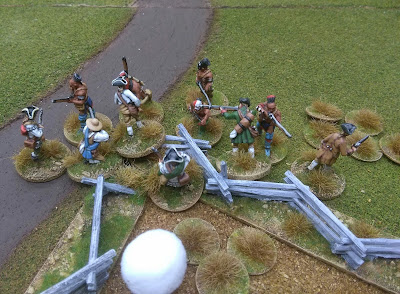 The Loyalist militia are in a bad way by now, another two volleys from the continentals and militia see them start to disintegrate and one group is forced to retire leaving the other one to take the fire alone. 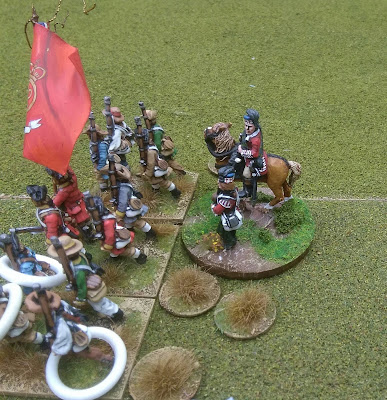 The Jaegers keep their fire on the continentals but so far I am still able to remove the majority of shock with my level 3 commander in chief. 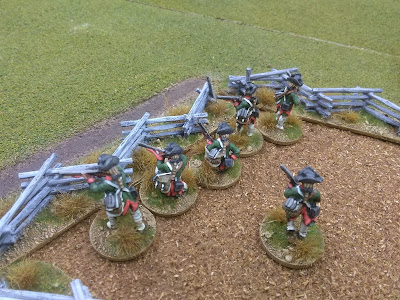 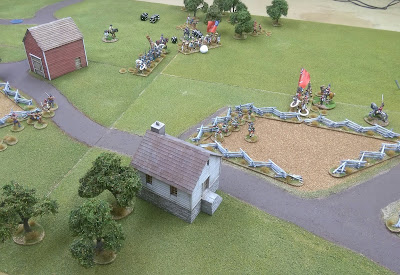 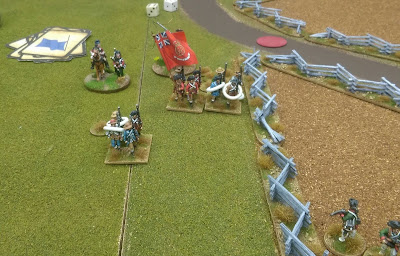 It has been going well for the Patriots up to this point but with enemies on three sides and virtually no skirmisher support left it doesn't look quite so good for the future. 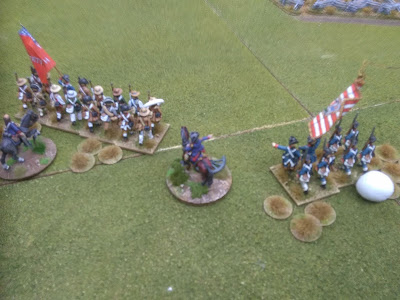 The Indians on both flanks are now able to fire into the flank and rear of the formed troops who receive double shock from this fire. They cant really turn to face their persecutors or the Jaegers will get double shock firing into their new flank. The turn of the cards is cruel with the Indians on my right flanks and the Jaegers coming out before my continentals, the shock and casualties are massive and the continentals begin to retreat in disarray. 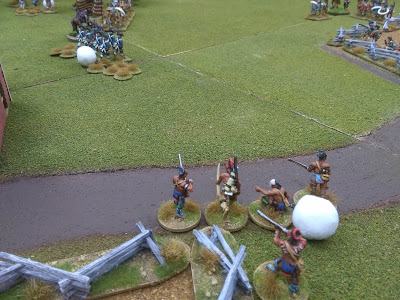 I am able to keep my militia unit in the fight but with three units now firing into them from 3 different sides they cannot possibly win and I concede the game to Steve. 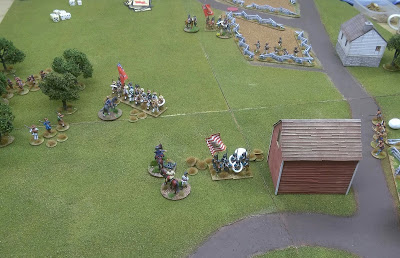 We were both pleasantly surprised by how realistic the handling of the Indians seemed and the difficulty the formed troops had in dealing with them once they were on the flanks. A great game which completely over ran as we enjoyed it so much. 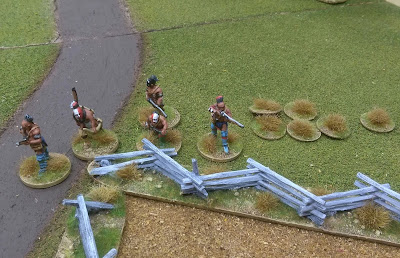 We will be trying this again in the very near future and I will also have the opportunity to play Sharp Practice some more at the Ebor Lard game on the 5th of October.

I admit to being quite excited.
Posted by RogerC at 01:54