Last night we play tested GAPA for the second time. Steve kindly provided the gaming space and this time we had 4 players rather than 2 with Chris taking the role of Umpire/Game master again as he has a better grip of the rules than the rest of us.


I think it safe to say after the last outing we had a lot of questions about how suitable the rules might be but felt they were interesting enough that we should play some more games before sitting back to see if they give us what we want.


As there were four of us we has slightly increased forces.


For the Swedes this was


10 battalion of foot. 2 Guards at Veteran, 7 line as trained and one tremanning as green.
4 regiments of horse all veteran but 2 dragoons and 2 horse
4 regiments of Poles all green
Battery of 2 field guns 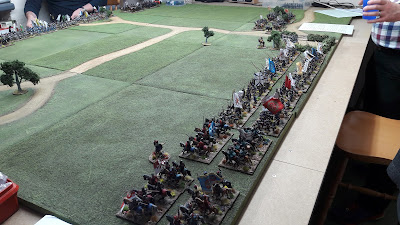 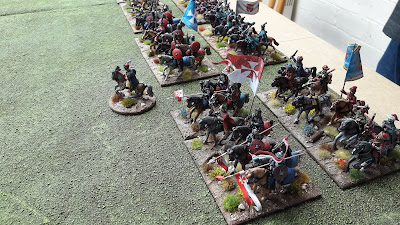 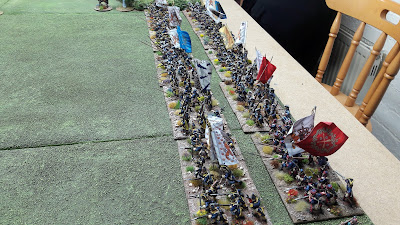 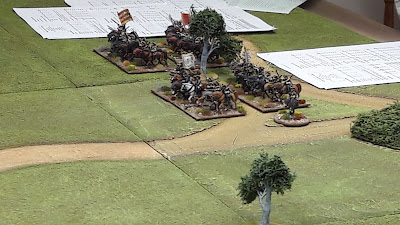 We started much further away from each other but were allowed "march moves". To explain each commander can give a number of orders but once a unit has carried out an order that's it till next go. You can use one order to make a whole line or column move as long as they are 50mm of the next unit. So in theory you only need one order to move a whole battle line if its in line or column.

So if a unit is more than 400 paces away from the nearest enemy you can issues it more than one march or deploy order to make them move a bit faster. Make sense? OK bare with me. 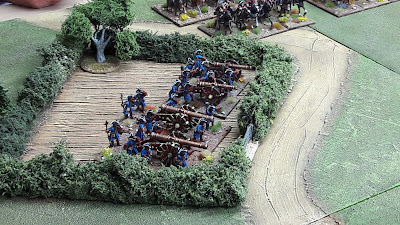 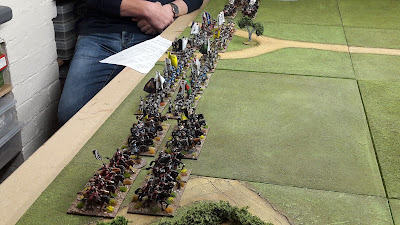 The Swedes got off to a good start despite a bit of damage from the massed guns. The Danes however failed numerous orders to advance (they only needed 1-4 on a D6) whilst this helped the Swedes manoeuvre it meant the two armies closed very slowly indeed as the foot only move at 6 inches per turn.


As we were multi player we tweaked the orders rules. If your side had 1 or 2 orders then this would mean each player had 1 or 2 to keep everyone busy, this was to ensure you were not having to argue over the one order across three commands. It worked well enough.


The Swedish right wing cavalry got into action quite quickly under Steve. Causing one unit of Dragoons to flee and one unit of heavy cavalry to a step loss and disorder. The Swedes however bounced and picked up there own dis-orders.


Meanwhile the Swedish foot were attempting to wheel as there is no ability to oblique march. A quirk of the rules here then means that the second line needs a separate order to do the same it cannot conform. The general was out of visibility and the second line failed to move.


The Poles advanced on the wing but artillery damage forced one unit back. 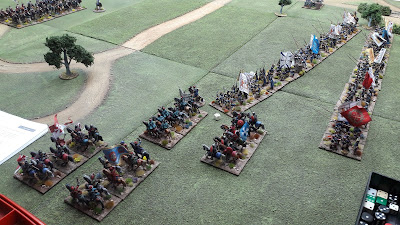 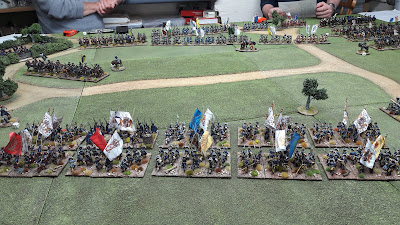 Moving the general next go allowed the Swedes to close back up, meanwhile Chris Flowers mixed force of Russian and Saxon cavalry was advancing on the Polish cavalry wing (conveniently blocking the pesky guns) 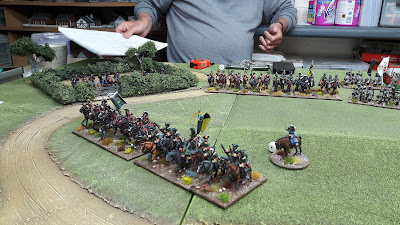 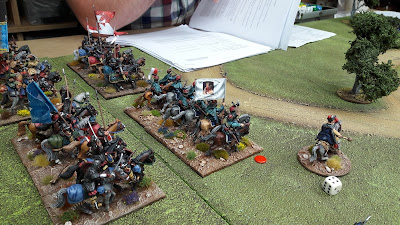 The Poles closed up and prepared for a bit of a kicking. 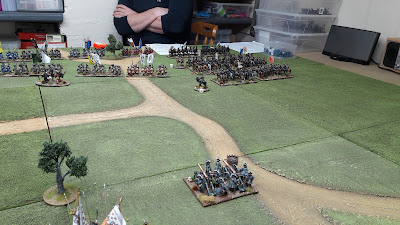 The Swedish guns were now in play, but at long range caused no damage all game.  The Cavalry were at it again, but with did-orders all around it was a bit rubber swords. 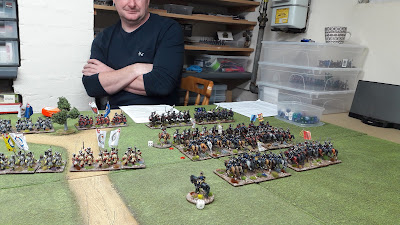 The Poles wheeled to face the Allies and the General attached himself in readiness to lead his brave fellows forward. 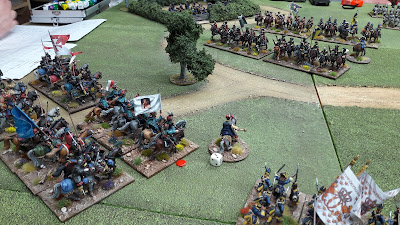 Meanwhile the Swedish foot steadily trundles forward as the Danes continue to get nowhere at all with bad order throws. 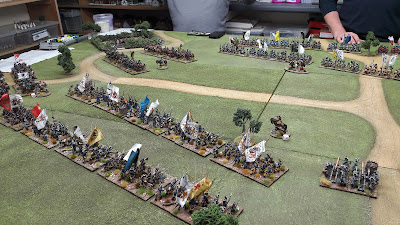 The Poles gallantly charge the Allies and honours are even as one unit from each side is thrown back. Unfortunately the Pancerni are now slap bang in front of the siege battery behind its protective hedge. Only unbelievable poor dice from Chris and good dice from me save them from annihilation. 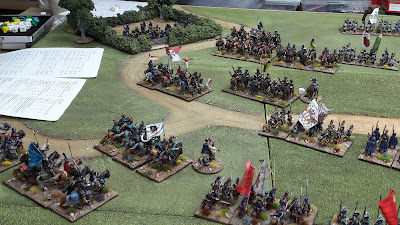 The Swedish foot advance again and at last are in range of the Russian Dragoons (only 4 inches) not surprisingly their volley is more of a fizzle than a roar and nobody flees or retires anywhere from either side. 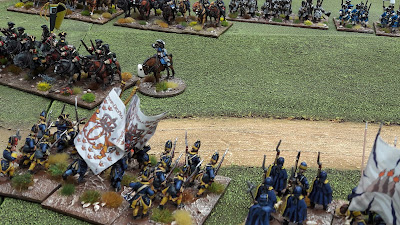 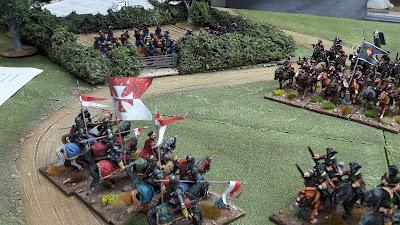 
On the left the horse from both sides are doing OK but the Danish battery is looking very dangerous. In the centre the foot are still nowhere near each other and on the right the Swedes definitely have the upper hand but the horse has not driven off the Danes and unable to effect the wider game.


Our thoughts are that at least another 2 hours would be needed to complete the game.


So observations. Chris Charlton, Mark and I still quite enjoyed them and so did Steve, Chris Flowers was less sure but happy to try them again.


We started too far away but that allowed us a good idea of how the movement and orders really work so no big problem from a play test point of view.


Potentially we need to look at distances. Foot moving at 6" and firing at 4" doesn't lend itself to big tables and multiple players. However before moving to 9" and 6" to see if it helps I think we need at least one more game with the raw rules.


Good time had by all, Thank you Steve Shann for the hospitality, Chris Charlton for running the game (and reading the rules) Mark fro providing the Danes and Chris for providing an open mind.


So watch this space. Thanks for reading.