These beauties arrived in the post,  released at the start of May I have been looking forward to these for a while.£25-£30 depending where you get them and 40 figures is a bit of a bargain. 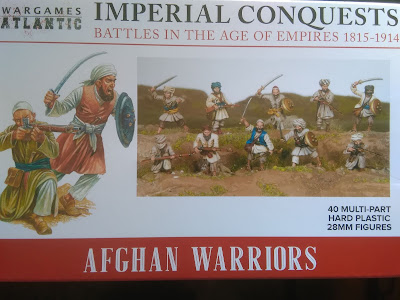 You get 8 of the same 5 figure sprue so no command sprue but that suits me. These were always going to be mixed with the Perry metal (and hopefully Perry Plastic) afghans. I also intend to use some Sikh turbaned heads from WWII ranges to create some Sikh irregulars too, probably just one unit of 20 but possibly push to 2..

So each sprue has 5 Afghan warriors, you have a choice of 12 different heads, some of which are very nice indeed, others are OK. Not a fan of the tuareg style wrapped across the face but each to their own. You also get two arms with Khyber knife, two with sword, one with punch dagger, three with jezail and two each with musket and martini henry so useful from 1700 to 1900 really, adding a later bolt action rifle or even a Kalashnikov shouldnt be too difficult if you need to advance them into the 20th century and you also get a spare of each weapon to stick to the back of a figure with bladed weapons. The left hand is sculpted on the barrel of most of the firearms so you need to match up the corresponding arm which can be fun, trying to get both arms and the hand to all stick together at the same time. A modeller I am not as I am sure will become evident.

However the figures are nice, they are quite slim but fit reaonably well with other ranges. The 4 shields are a boon as I am short of some so really helpful.The charging figure with the satchel is probably my least favourite of the figures whilst the kneeling chap is probably the one I like best. All in all though happy. 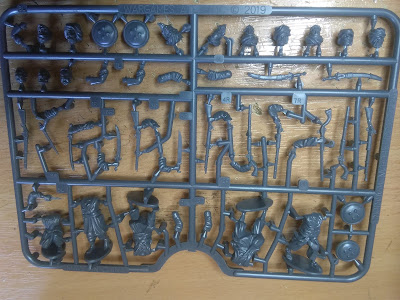 Here is the first sprue built and primed. Initial thoughts are that the firing jezail probably only works well on the kneeling figure, but we will see as I build more. The kneeling chap is still my favourite. 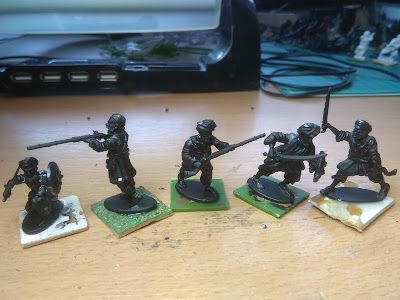 A quick paint job and here we are, 5 more afghans. The finished article is quite nice, definately slimmer than other ranges and I need to be more careful with my modelling and positioning of the arms but nice result. The standing firing figure looks OK now hes painted but I wont use this one with that arm again. the kneeling figure defending himself with shield and chora came out well and the others are OK.

I like using a mix of washed out colours rather than just whites although I will mix more whites and greys in as I do more. 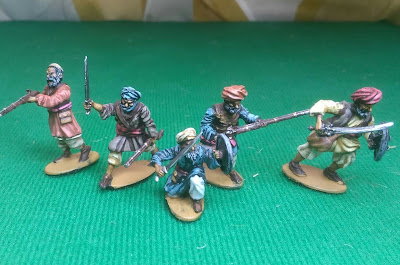 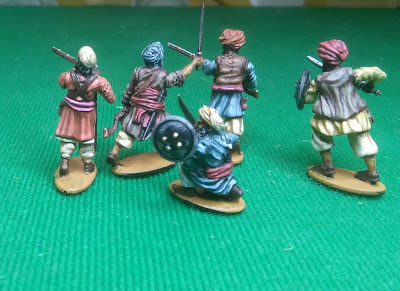 Here I have mixed them with Perry Afghans and an old Foundry one (kneeling pointing), they are certainly slighter but I think they mix well. No concerns about mixing on the same base. 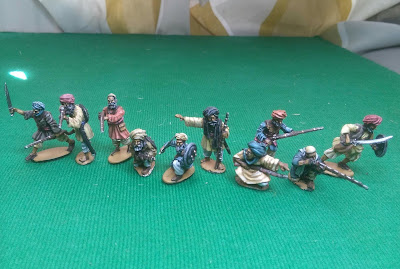 Finally three of them mixed with three metal Perry's to give me  small unit of skirmishers, happy with the end result and ready to try another sprue of them. 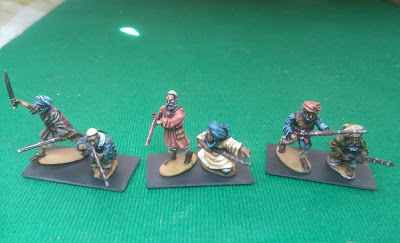 So overall I am happy with these, the pack will give me two full units but will of course be mixed with the metals and also the Perry plastics when they come out to probably give me 4 or 5 more units of irregulars.

So they probably get 3.5 out of 5 for me, maybe more if I can get my modelling skills a bit higher and well worth the money I feel.