We were due another game at Steves and chum Chris Charlton was keen to have a run out with Sharp Practice. We duly set up a slightly larger AWI game with lots of different troop types. 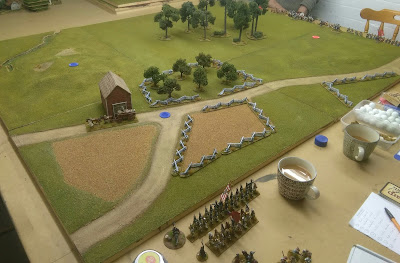 The British objective would be to capture  Patriot supply dump. The Patriots simply had to stop them without being destroyed in the process. 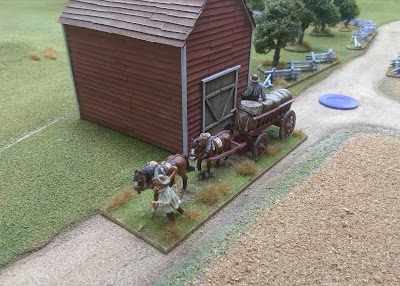 So the Rebels, ahum, Patriots, have:

I have these guys. 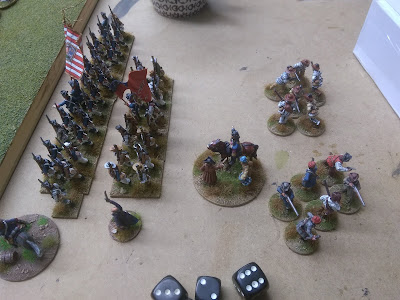 Chris Charlton and Chris Flowers have the Tories, or Loyalists as you like: 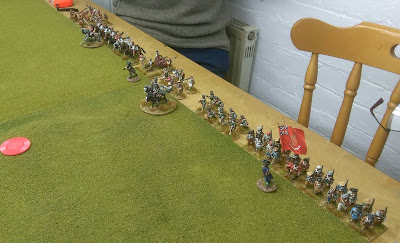 I get 2 deployment points the British just one and one of my units of rifles is already on table. 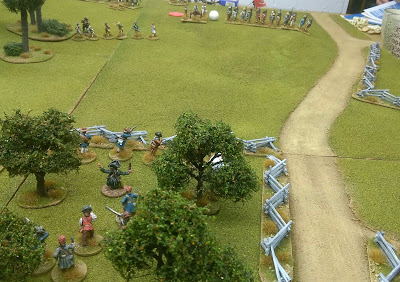 My cards all come out quickly with the Continentals deploying to the left of the supply dump supported by a unit of rifles, the rest of my force starts to occupy an orchard they can use as cover to defend the front of the supply dump.

I manage a shot off at the Dragoons with my rifles and inflict 2 shock on them. Chris Charlton in return pours a volley from his Veteran Militia into my rifles killing one and dropping some shock on them. 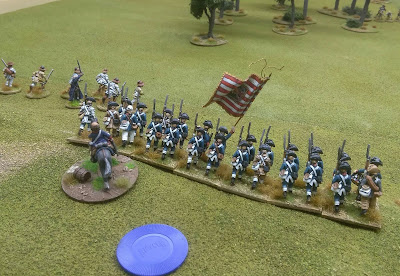 Meanwhile my 2 groups of militia march to help out the skirmish screen whilst my continentals start to march towards the sound of musketry. 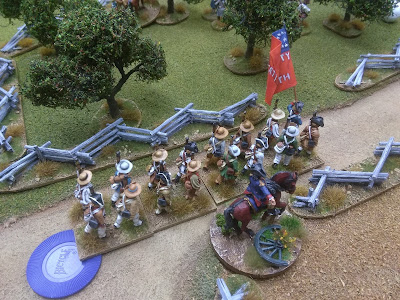 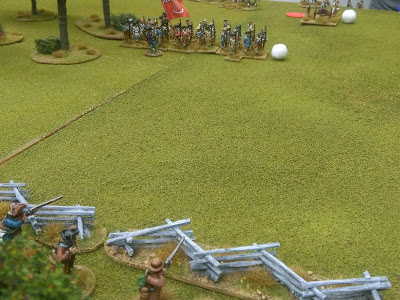 I push my stuff forward but both the Jaegers and in particular the Indians are not moving very far for the Tories. However they still have a full firing line, gun and Jaegers wearing down my two skirmish units in the orchard, I eventually pull back the militia skirmishers and march my own militia up to the fence and volley the Tory veteran militia. Not many hits but I do get a couple of kills. 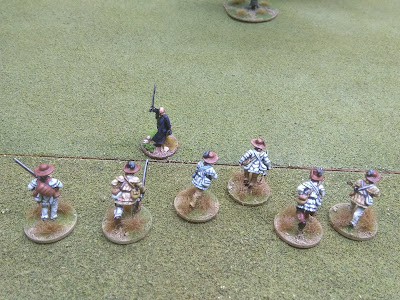 My Rifle company has now been decimated but the militia is in place and trading volleys with the Tory militia supported by the gun and Jaegers. Meanwhile my Continentals have marched into range and Chris Flowers Indians are blundering about in the woods and the light dragoons trot around the edge of the table without a care in the world. 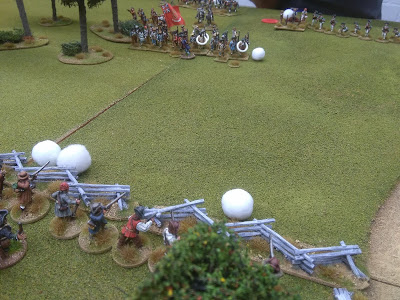 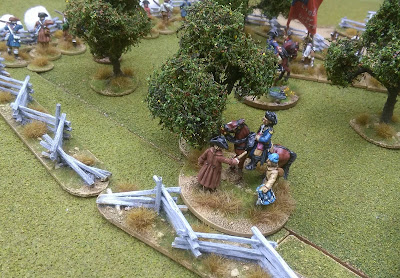 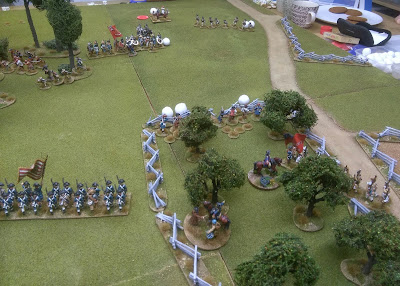 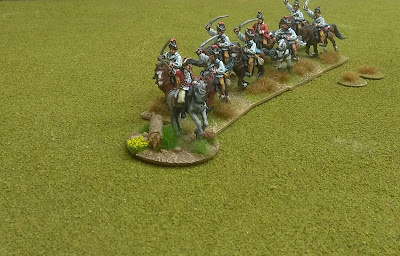 Next move and the Light Dragoons go u to a gallop and are suddenly right there on my flanks. The continentals open fire on the veteran militia and do some serious damage but I have a real worry on my flank, the Indians are within 4 inches of the edge of the wood but Chris roles a 1 for movement, modified by 1 for the terrain he doesnt move at all. 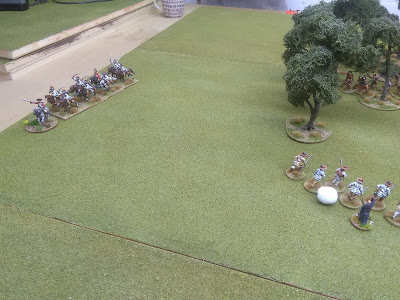 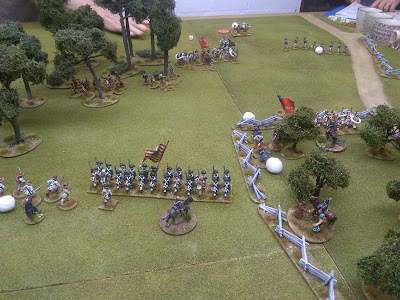 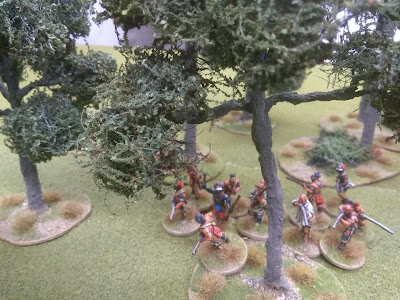 Another devastating volley into the Veteran Militia and they now have 9 casualties and plenty of shock, I turn my Rifles around and fire into the Light Dragoons with virtually no effect at all. 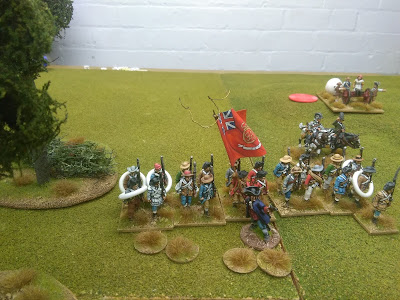 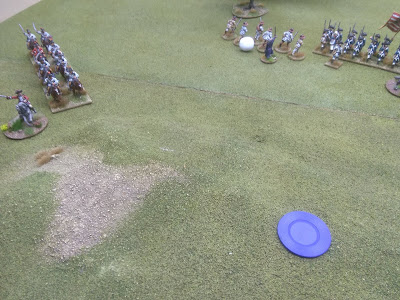 The Indians finally arrive at the edge of the wood and fire into my Rifles from the rear, minimal injuries but notice has been served, I about turn two of my three groups of Continentals, Chris's Militia have been withdrawn out of range so these guys are much better used firing at the cavalry, unfortunately my volley is pretty poor and the Light Dragoons occupy my deployment point taking another of my force morale points. 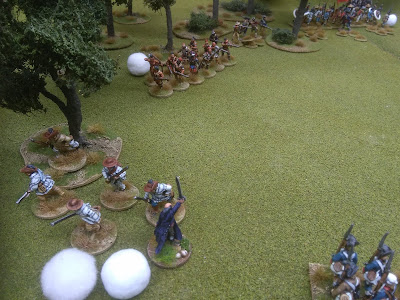 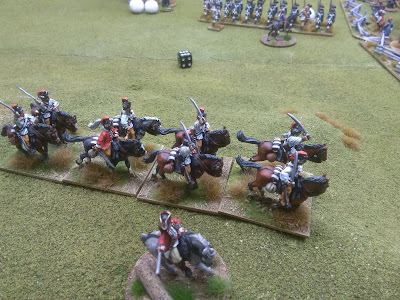 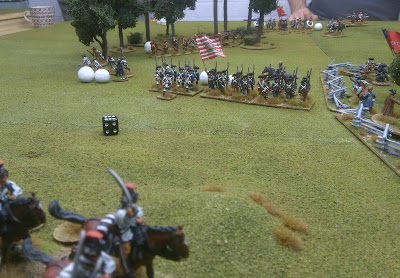 The Jaegers have kept up an ineffective fire on the Militia along with the gun and moving forward at a painfully slow pace. 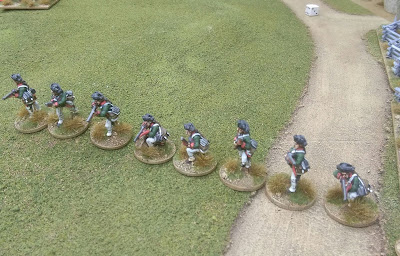 Next move the light dragoons trot forward and take control of the supply dump winning the game, despite inflicting far more casualties on the Torie's and having my continentals entirely untouched I have lost sight of the objective and been roundly beaten. Doh! 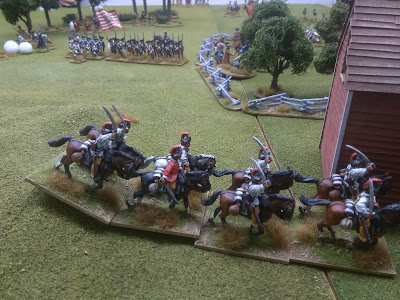 Another fun game and opportunity for chum Chris Charlton to get to grips with the game, we will play another in a  couple of weeks but use a different period so the game has a different feel, Chris plans to use SP2 for Apaches and Mexicans which should work really well.
Posted by RogerC at 12:44