I have been toying with how best to represent a couple of eye catching units for my Sikh Wars collection. The Govorner Generals Bodyguard and the Gurkhas. Both iconic and hard fighting units that saw a lot of action. Neither having figures specifically designed for them.

The Governer Generals bodyguard have a natural fit with the Studio miniatures Bengal Light Cavalry in plumed shako but to be honest I really dont like them. With that in mind and a couple of spare sprues of British Peninsular Light Dragoons laying around I thought I might try a bit of simple conversion work.

The horses have simple gear lending themselves to a number of conflicts, they do however have the docked tails of British horses so my first task was to add tails to make them fit for India. Green stuff out, they look OK I just wonder if they will stand the test of time. 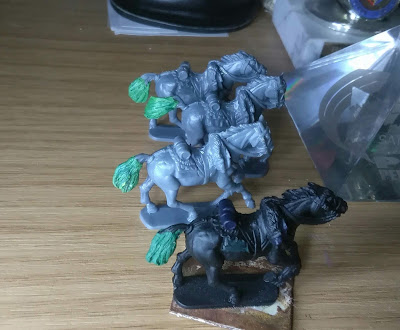 For the Sowars I already had an idea of how best to represent them. Their legs would be in overalls so the later dragoon legs, I only had four so took a craft knife to the hessian boots on two more to get the most from the sprue.

The torso however I felt better represented with laced jacket so used the early torso. The shako was both peakless for Sowars and had a white plume so craft knife to peak and green stuff got the head gear soemthign like. The officer had a covered cap swapped from an appropriate Sikh Wars figure and I made thjings easier adding a WW1 Woodbine miniatures bandaged head to a figure to reduce green stuff workload. 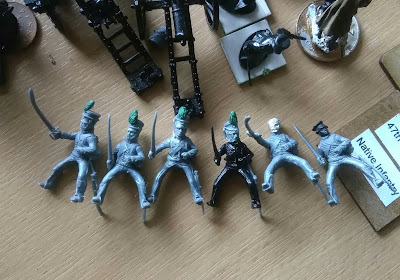 I had spent ages trying to find an appropriate picture of this unit with no success after finishing the first test figure one of the guys on the lead adventure forum sent me an image of them and I find I have things a bit wrong. The plume is black and the trouser seem is red, also the lace is yellow not white and their are no cords at the side of the hat (Thanks Akoudaka). Not big changes in the scheme of things. However the Perry horse doesnt look right so I had to pinch some Iron Duke mutiny horses from chum Jerry (cheers Jerry) 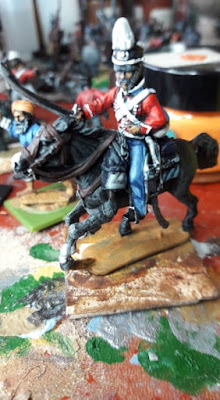 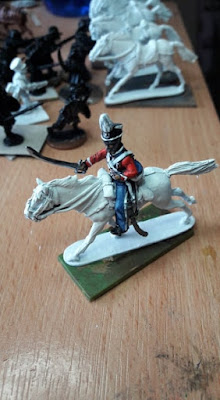 I am happy finally with this test figure and will be painting the other 5 to give me the small unit for Black Powder. 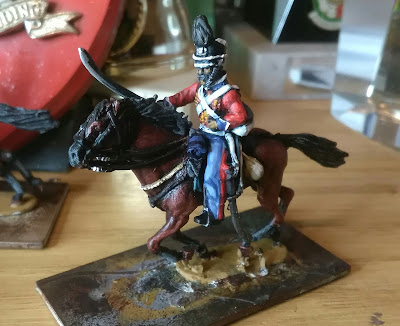 I am reasonably happy with the end result although I am always slightly disapointed that my own minor conversions dont look as good as if the Perry's did them. Three more to do as currently planning this to be a small unit to represent a wing of the Bodyguard. 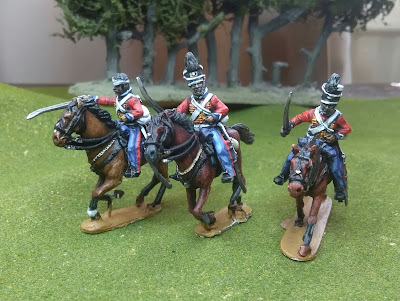 Most of my Sikh regular cavalry have been picked up second hand over the months, this has led to some odd numbers, in particular the Dragoon unit of 10 bizarrely ended up with 5 buglers, A bit of advice from chum Dave saw me attack these with a knife and try replacing the bugle with a carbine. 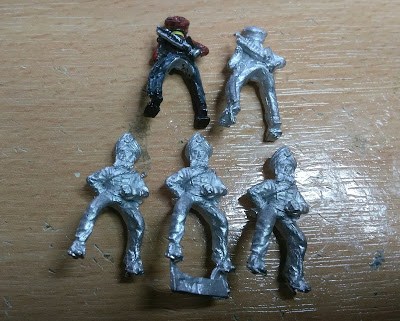 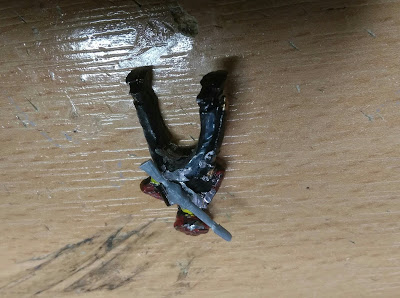 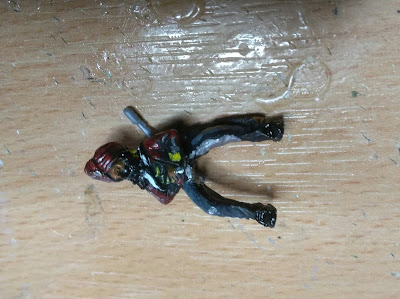 Its a much simpler job than the Bodyguard and a much better outcome, dont know why I didnt think of it sooner. The middle figure got to keep his trumpet. 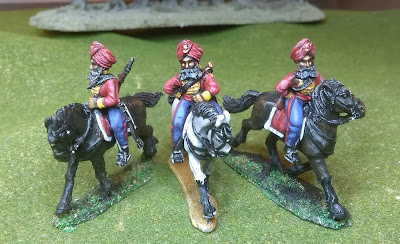 The biggest head ache for me was the Gurkhas, an iconic unit I felt I just had to have but nobody did them, Foundry leaving them out of the Sikh Wars range. Studio did some which they discontinued which were pretty awful. I could use Indian mutiny figures but the straps are wrong, they didnt have the rifles they have in the mutiny but muskets. The biggest headache though is the head gear. I had thought they wore the distincive forage cap with a white cover, I then found an image of a bell top shako with white cover. This was confirmed bya  fellow gamer who sent me images of a peaked bell top shako with no cover. I have since been told they actually wore an earlier form of the forage cap but this is still pretty ambiguous so I can either wait until I am sure or just decide what I think is the best fit and stick with it.

Either way I kicked off by putting some minor conversions onto Foundry flank company sepoys. 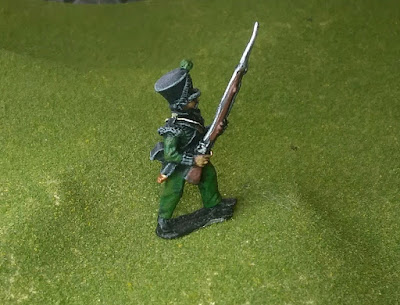 One Bell top shako with and one without a cover., I used a spear tip to model the sheathed Kukri on the right hip, I think we have captured the right look here, just need to finalise headgear. I will probably use the Iron Duke Sepoys to model the rest of the Unit, ideally I want something very dynamic for the Gurkhas. The peak is green stuff, harder than it looks to be honest. The covered shako is a Warlord Chasseur a Cheval head. 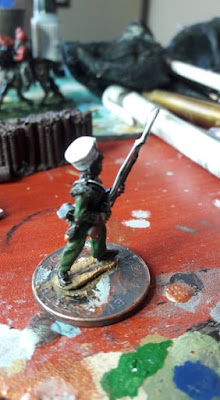 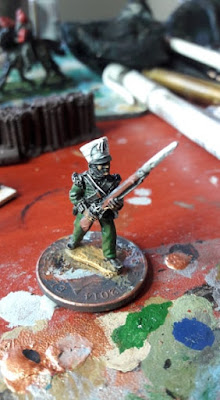 Whilst digging into the Gurkhas and asking for advice I was approached by a member of the Lead Adventure forum to aprise me I had got it wrong with the Gurkhas. They wore the shako in an earlier period but for the Sikh Wars a black cap usually covered with white cotton was worn, the same headgear they had in the Mutiny but they did not carry rifles and incidentally the headgear I had initially thought they utilised.. Oh dear. It looked like I was going to have to start again.

The advice though was to continue to use HEIC Sepoys as the base figure but model the new hat on in some way, either green stuff or using Napoleonic Russian Plastic heads as a base. He very kindly posted me a few plastic heads to make  a start with. Thank you! I have to admit by this time I was ready to throw the towel in but my entusiasm soon got the better of me.

I went with the original suggestion I had been kicking back against, HEIC Sepoys in caps with green stuff added and a kukri sticking out from the right hip. Along with some other figures (including the Sepoys converted back to shakos) you can see my first three attempts below, I am really not sure if these just look like dodgy French chefs! With Iron Duke planning Gurkhas in their Indian Mutiny range at some point I have to wonder if its worth just waiting and curbing my impatience. After all I still have at least 10 battalions of other troops to finish. 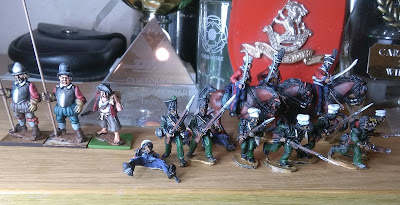 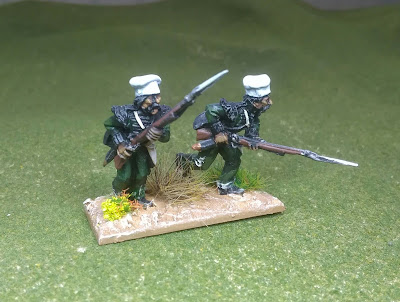 I also decided I wanted  a bit of scenery, a nice ruined temple to put in some jungley ground and also use as a deployment marker in sharp practice, this Aquarium piece depicting the god Ganesh fits the bill nicely and was actually quite cheap too. He features in the after action report on my first Sikh Wars Sharp Practice. I really like this model although I might have a minor tinker with the paint job at some point. 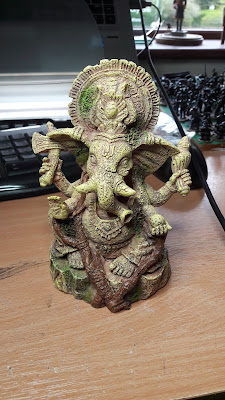 Apologies that some of the narative has ended up centred rather than to the left, for some reason the system is not allowing me to remedy that. No doubt user error!

Looking forward to now getting some of these units completed and on table and in action.
Posted by RogerC at 07:27